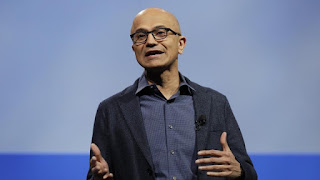 Amid ongoing protests against the amended citizenship law, Microsoft CEO Satya Nadella on Monday termed the situation in the country as “sad.”
“I think what is happening is sad… It’s just bad….” he told BuzzFeed editor-in-chief Ben Smith at a Microsoft event in Manhattan. He further expressed how he would want to see a Bangladeshi immigrant become the next CEO of an Indian multinational corporation.
“I would love to see a Bangladeshi immigrant who comes to India and creates the next unicorn in India or becomes the next CEO of Infosys,” he said.

The Microsoft CEO later took to Twitter and said his hope is for an India where an immigrant can aspire to found a prosperous start-up that benefits the Indian society and economy.
“Every country will and should define its borders, protect national security and set immigration policy accordingly. And in democracies, this is something that the people and their governments will debate and define within those bounds. I’m the shaped by Indian heritage, growing up in a multicultural India and my immigrant experience in the United States. My hope is for an India where an immigrant can aspire to found a prosperous start-up or lead a multinational corporation benefitting Indian society and the economy at large,” he said in the statement.
The Citizenship (Amendment) Act (CAA) was passed by Parliament on December 11 last year and came into force on January 10.
The CAA is designed to facilitate Indian citizenship for non-Muslim refugees from Pakistan, Afghanistan and Bangladesh who arrived in India before December 31, 2014. The Opposition says the law is divisive and discriminatory because it makes religion a test of citizenship. Several parties have also challenged the constitutional validity of the law.
The ruling BJP has shown no inclination to roll back the law and Union home minister has gone on record to say that the government “won’t budge an inch” on the legislation. The BJP has also launched an outreach programme to push its point of view on the law.