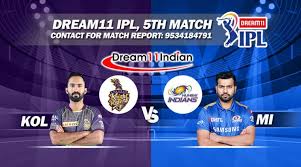 : The Match 5 ofthe Dream 11 Indian Premier League 2020will witness Kolkata Knights riders lock horns against Mumbai Indians. This will be the first league match of the Kolkata team in this year’s IPL. The team has exciting young talent like Shubman Gill, Nitish Rana, and fast bowlers like Shivam Mawi and Prasidh Krishna. They are touted to be the future stars of the senior Indian team. The West Indian stars, Andre Russell and Sunil Narine are the driving force of the team. With the presence of Dinesh Karthik and Eoin Morgan, the team looks quite stable in the middle order. The team has foreign speedsters like Pat Cummins and Lockie Ferguson who can portray the main role for the team’s victory. Not to forget, they have Kuldeep Yadav in their spin department along with Narine to support the team in the crucial situations. The new young additions to the squad, Tom Banton and Chris Green have been quite successful for their respective sides in the T20 leagues all around the world.

On the other side, Mumbai Indians have been a strong side over the years. In the first match, De Kock and Rohit provided a very good opening stand and the middle order tried to support the team but the trio of Pandya brothers and Pollard could not provide a finishing touch to the team and they fell short by around 20 runs. The bowling department faltered in the death overs and helped the CSK team to easily win the game. They would look to rectify their mistakes and come well prepared to register their first win in the tournament. Below is the KOL vs MI Dream 11 prediction discussed.

Kolkata’s coach Brendon McCullum has already briefed that Tom Banton will not be a part of the XI to keep the team balanced. Eoin Morgan & Pat Cummins will be playing the game with other two overseas players being- Russell and Narine.

Mumbai’s XI from the last game looked decent and they could go with the same playing XI, or with a single change in the bowling department.

Pitch Report – Apart from the spinners, the medium pacers have also achieved much success here. Anything above 150 here would be a good score.

Weather Report– There are no chances of rain at Abu Dhabi.

S Narine- The West Indian spinner, who is also one of the most successful T20 players. He’ll be my first choice of captain, as he bowls 4 overs and opens the batting too. He’s a magical batsman and a spectacular spinner; he can’t be left out of any fantasy team and also in the choice of captains. Narine has played 110 matches in the IPL and has scored 771 runs (most when opened) with 122 wickets from the ball.

Q Kock- The 27-year-old cricketer from South Africa is an excellent T20 Batsman. He has played 51 matches in the IPL until now and has scored 1489 runs. Having played for numerous franchise in the league, he has tons of experience and is a big hope in the team for defending the trophy. QDK is a destructive opener, who can give a solid start in the game, just like the last one. He will definitely be my best choice of Captain for the KOL vs MI today match prediction.

S Yadav- In 2019, he was the second-highest run-scorer for the Mumbai Indians. In 2018, he scored over 500 runs. The middle-order hopes the most from SKY, as he is capable of doing wonders for the team. He has excellent batting skills and the finest technique as a batsman. In 86 IPL matches, he has scored 1565 runs. Yadav can be made as a captain. He is a reliable player to be betted upon.

A Russell- The most dangerous T20 batsman in the world right now can be one of the best vice-captains picks for your team. In the recently concluded CPL, he scored 222 runs in 8 innings and helped the team in crucial situations. Additionally, he has been one of the best performers for the side for the last 2 years and would like to continue the good form.

N Rana- A talented middle-order batsman has impressed everyone since he was bought by the Kolkata team in 2018. He has amassed 1085 runs in 46 IPL matches. He has often helped the team to post a good total in the board after the top order collapses. With adequate experience, he is surely one of the most important players for your fantasy team and the Kolkata team.

R Sharma- No words could be enough to describe this pick and choice of selection as a Vice-Captain. Rohit might not have been to his extreme best, as the International circuit, but he can’t be left out of the team. He has scored 4898 runs in the 188 games he has played in the IPL. That’s a massive number and he’ll surely out pass 5000 marks in this season. Rohit will most probably open for the team and can be a very valuable pick, keeping in mind his legacy in the limited format!

JOIN OUR TELEGRAM CHANNEL FOR INSTANT UPDATES OF THE IPL :