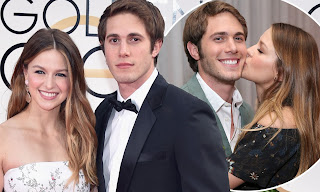 Actor Blake Jenner shared a lengthy statement on Instagram Thursday in which he takes responsibility and apologizes for an abusive relationship while also lodging serious claims of abuse against his former partner.

The post is his first since November 2019 and he says he has been thinking about what to say over the past 11 months. “Throughout that time, I reflected on a period in my life that I had previously kept in the darkness out of shame and fear, but I know this I something that needs to be addressed, not just publicly, but privately with the individual directly affected and with myself,” writes Jenner as he opens the statement.

He admits to an argument that escalated and says that he threw a phone that hit his former partner in the face. “In a moment of frustration, while I was standing in the hallway and she was in our bedroom, I threw my phone aimlessly and it hit my former partner in her face. I froze in a state of shock and horror as my then-partner screamed in anguish, her eye immediately swollen shut from the impact of the phone,” he writes. “It’s a moment that I will regret for the rest of my life. … I am responsible for the pain that I caused her in that moment and beyond. And it is something that I am still working on forgiving myself for.”

Though he doesn’t mention the name of his former partner, he does say the relationship he’s addressing “was spoken about late last year.” The post is his first on the platform since related abuse allegations surfaced in November 2019 from his ex-wife, actress Melissa Benoist, 32.

In November, Benoist posted a 14-minute Instagram video during which she spoke of being a survivor of domestic violence. She provided shocking details of the abuse that ranged from emotional manipulation to physical violence on numerous occasions.”I learned what it felt like to be pinned down and slapped repeatedly, punched so hard I felt the wind go out of me, dragged by my hair across pavement, head-butted, pinched until my skin broke, slammed against the wall so hard the drywall broke, choked,” said the Supergirl star at the time.

She also detailed the aftermath of having an iPhone thrown at her face with her partner to cover up an injury when he threw a phone at her face, injuring her eye and breaking her nose. “Deep down I never believed he would change, I just fooled myself into thinking I could help him…Someone had to let him know his behavior wasn’t OK, and who better than the one he was taking it out on?”

In his post, Jenner claims that “there was mental, emotional and physical abuse inflicted from both ends.” He goes on to write that they started seeing a therapist together but could not get out of a “toxic cycle.” He blames “false ideas of manhood” and masculinity that caused him to act the way he did, though he was quick to point out that he was not using that as an excuse, only as a way to shed light on his process of “healing and reckoning.”

Jenner then accuses his former partner of mental and emotional abuse. He states that he “was made to pass” on acting jobs over prospective jealousy of female co-stars; discouraged and threatened to not develop relationships with nor pose for photos with female co-stars at events; “made to feel guilty for working as I received phone calls from my former partner while I was away, threatening self-harm out of depression and a deep-seated fear of abandonment.” He also says that he was scratched, slapped, and punched in the face and that he, too, suffered a broken nose. “I was physically assaulted in the shower, leaving me with a traumatic injury that I do not want to delve into at this time.”

After Benoist went public with the claims in 2019, there was online speculation that she was speaking of her former husband, Jenner, as the two were married at the time she recounted a story involving a phone during an appearance on The Tonight Show in 2016. Neither party has addressed the speculation in the many months that have passed. Jenner and Benoist worked together on Glee, later married and divorced in 2017.

Benoist welcomed her first child two weeks ago, a son, Huxley Robert Wood, with husband Chris Woods. Jenner is set to star in the ambitious Richard Linklater film Merrily We Roll Along to be filmed over many years.

Though Jenner has provided a new set of claims with some details, Jenner writes that he was withholding some because “to get into the specifics would not only be revealing things that I believe my former partner would want respected as they pertain to her personal life, but would inevitably turn this into a she-said-he-said mudslinging match of sorts — and that is the last thing anyone wants.”

Again, he does not name Benoist in his statement but he does write that he has reached out privately to his former partner. “To whoever is reading this, I am so sorry for the loss of respect and trust; for injecting any ounce of negativity or sorrow into a world that is already infected with so much sorrow as it is; and for coloring the art that you view in any shades other than what is supposed to bring you joy,” he writes.

“However, the most important apology extends — then and now — to my former partner. I am sorry. There are many things I could have done differently; and while I wish it did not take the pain that was suffered throughout the course of our relationship, I will never regress to making the same mistakes ever again. I will never stop doing the work necessary to better myself in all areas of my life. I wish you and your family nothing but good health, joy and love.”