Neha Kakkar and Mujhse Shaadi Karoge contestant Rohanpreet Singh’s wedding reports have been doing rounds on the internet. They are going to tie the knot on October 24 in Delhi. According to Spotboye, Neha and Rohanpreet fell in love with each other during the lockdown and they have now decided to culminate their relationship into marriage. The report also says that though Neha and Rohanpreet didn’t date for long, it didn’t take much time for them to decide to take the plunge. There has not been any official confirmation or announcement about their marriage either from Neha or Rohanpreet, as of now. Now, a picture of Neha Kakkar and Rohanpreet Singh has gone viral on the internet. In the picture, we see Neha and Rohanpreet and his parents sitting on a sofa. It is not written as they are his parents but the pictures on his Instagram handle prove that they are his parents. Neha Kakkar is seen a casual outfit but we also see a beautifully decorated bag in her hand.

Neha Kakkar recently made headlines as the rumour of her getting engaged is making rounds on the internet. Here is a picture of Neha Kakkar with her rumoured beau Rohanpreet Singh. In the picture, the duo is seen flashing a wide smile as they pose for a picture while sitting next to each other. Neha Kakkar is seen donning a Mickey Mouse printed shirt with bottoms while Rohanpreet Singh is spotted wearing a floral shirt.

Neha Kakkar opted for a soft makeup and completed it with an open hair look. Rohanpreet Singh posted the picture on his Instagram handle with the caption, “Shukar Hai Mere Rabba!”. (With God’s grace) He also added a folding hand, blessing and a heart emoticon with the picture. Fans in a huge number showered love on the duo’s picture and also asked them if they are getting married for real. Neha Kakkar also commented on the picture. She wrote, “Waheguru Ji! ♥ï¸”. 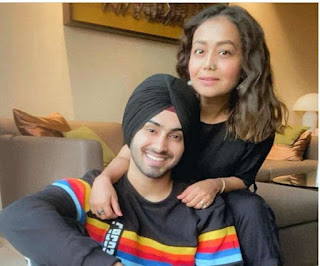 The confirmation of their relationship came after the rumours of Neha and Rohan’s marriage was doing rounds on the internet. Last night, Neha Kakkar shared a video on her Instagram stories tagging Rohanpreet. She wrote, “I want cake every day. Okay @Rohanpreetsingh?” Rohanpreet replied to her and wrote, “Hanji hanji jo hukum meri zindagi meri jaan.”

According to reports, it is said that the duo is all set to get married on October 24. However, none of them have confirmed the reports.

A photo of Neha and Rohanpreet with the latter’s parents was doing rounds which led to netizens speculating that the duo is rokafied and is going to get married soon.

In the viral picture, Neha Kakkar and Rohanpreet Singh are sitting hand in hand and smiling for the camera sitting by the side of the to-be groom’s parents.

One Thought to “Rohanpreet Singh and Neha Kakkar :Some rumored about wedding 9 oct 2020”