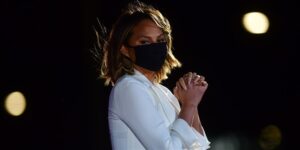 After recently posting several emotional social media messages, Chrissy Teigen has made her first public appearance since she and husband John Legend shared their tragic pregnancy loss at the end of September.

“I want to do a special song that I dedicated to my wife a little while ago,” Legend said, as Luna stood behind him and Teigen stood at his side. “I wrote this song as a tribute to our relationship and the fact that love can get us through all kinds of tough times. We know that the whole nation is going through tough times right now. … This song is called ‘Never Break.'”

The family left the stage as Legend began the emotional performance.