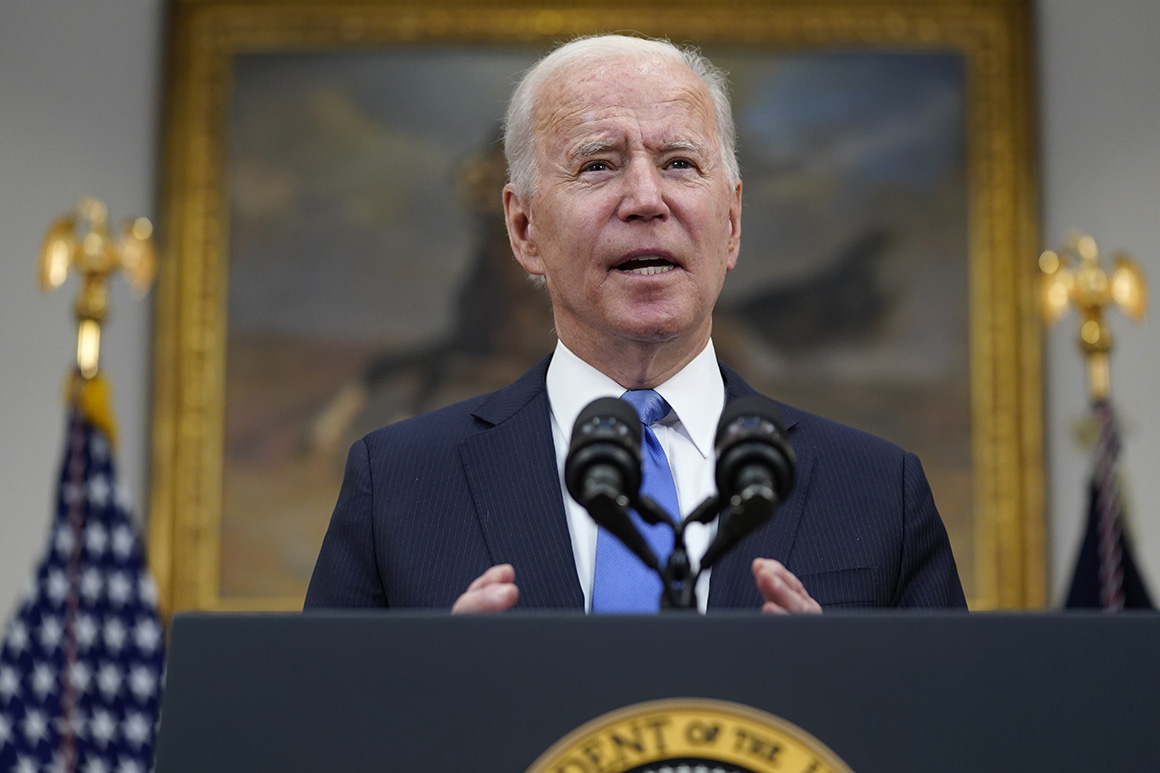 President Joe Biden on Saturday reiterated his “strong support” for Israel’s right to defend itself in a conversation with Prime Minister Benjamin Netanyahu but expressed concerns on growing civilian casualties and targeting of media outlets as violence escalated in Gaza over the weekend.

The call came hours after an Israeli airstrike destroyed a high-rise building in Gaza City that housed offices of The Associated Press and other media outlets, including al-Jazeera, and an Israeli air raid on a refugee shelter that killed 10 Palestinians, most of them children.

Biden noted in his conversation with Netanyahu that “this current period of conflict has tragically claimed the lives of Israeli and Palestinian civilians, including children,” according to a readout of the call released by the White House. He further “raised concerns about the safety and security of journalists and reinforced the need to ensure their protection.”

He also condemned “indiscriminate attacks” by Hamas “against towns and cities across Israel.”

The call also came as Biden faced pressure from congressional Democrats to take a tougher tack toward Israel. In a statement released Saturday afternoon, Sen. Robert Menendez (D-N.J), one of the most pro-Israel Democrats on Capitol Hill, condemned Israel’s recent strikes.

“I am deeply troubled by reports of Israeli military actions that resulted in the death of innocent civilians in Gaza as well as Israeli targeting of buildings housing international media outlets,” Menendez said, urging the Israeli government to “continue taking the conscientious practice of giving advance warning of its attacks to reduce the risk of harm to the innocent.”

Biden also spoke Saturday with Palestinian Authority President Mahmoud Abbas in his first conversation with Biden as president. Biden called on Hamas to cease rocket fire into Israel, dramatic pictures of which were broadcast throughout this week, some from the high-rise building targeted by Israel on Saturday.

The strike on the office building was condemned by AP President and CEO Gary Pruitt as “an incredibly disturbing development.” In a statement, Qatar-based al-Jazeera said it viewed the action as “a clear act to stop journalist from conducting their sacred duty to inform the world and report events on the ground.” The International Press Institute said the strike “represents a gross violation of human rights and internationally agreed norms.”

The building was evacuated after the Israeli military warned a strike was imminent. The Israeli military, without providing evidence, said that Hamas intelligence was using the building, accusing the group of using journalists as human shields. Netanyahu said that the building was evacuated after a warning, which showed the country was “doing everything” to avoid civilian casualties, according to a readout of his call with Biden provided by the Israeli government.

However, in a speech broadcast late Saturday in Israel, Netanyahu pledged the military campaign would continue “as long as it is required.”

Defense Secretary Lloyd Austin also held a call Saturday with his Israeli counterpart, Benny Gantz, which largely echoed the higher-level discussions, according to a U.S. readout.

Biden also updated both Netanyahu and Abbas on U.S. diplomatic efforts and regional engagement to end the conflict, and expressed to both “their shared desire for Jerusalem to be a place of peaceful coexistence for people of all faiths and backgrounds,” according to the White House statement.

After the outburst of violence that started in Jerusalem and spread rapidly, U.S. diplomat Hady Amr, the deputy assistant secretary for Israeli and Palestinian affairs, was dispatched to the region. An Egyptian intelligence officer on Saturday told the AP that Egyptian mediators do not expect a ceasefire before a U.N. Security Council meeting Sunday.

On Saturday, the Council on American-Islamic Relations said it will boycott the traditional White House Eid celebration to be held Sunday to protest the Biden administration’s actions amid the escalating violence.

The Muslim advocacy group said it was “incredibly disappointed and deeply disturbed” by the administration’s response to the violence. “President Biden has the political power and moral authority to stop these injustices. We urge him to stand on the side of the victims and not the victimizer,” CAIR National Executive Director Nihad Awad added.

In a Friday statement marking Eid, Biden said: “Palestinians — including in Gaza — and Israelis equally deserve to live in dignity, safety and security. No family should have to fear for their safety within their own home or place of worship. We think most about the children in these societies who face trauma from a conflict far beyond their control. My administration will continue to engage Palestinians, Israelis, and other regional partners to work towards a sustainable calm.”