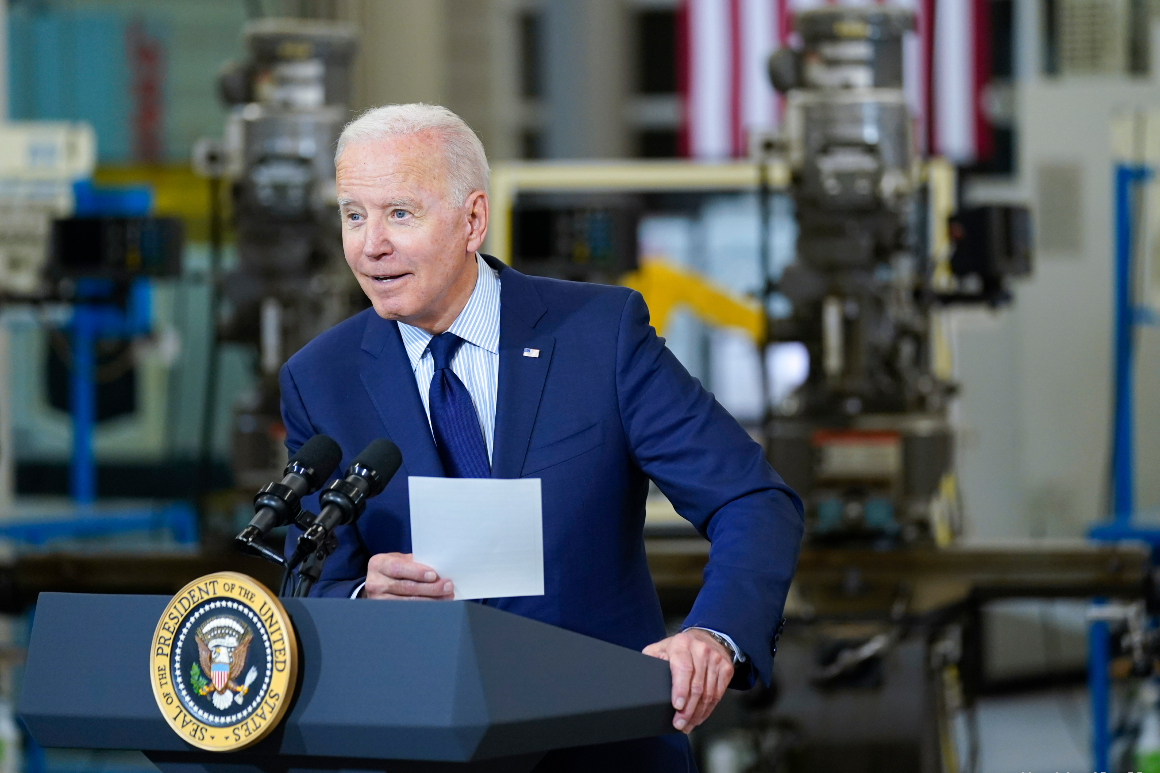 CLEVELAND — President Joe Biden continues to negotiate with Republicans on his big-ticket spending plans. But on Thursday, when he left Washington, he mocked them for voting against the coronavirus recovery package and then turning around and promoting the bill.

“If you’re going to try to take credit for what you’ve done, don’t get in the way of what we still need to do,” he said during a visit to Northeast Ohio, holding up a list for 13 Republicans. “Not a single one of them voted for the rescue plan. I’m not going to embarrass anyone, but I have here a list of how back in their districts they’re bragging.”

In a speech at Cuyahoga Community College, Biden said his trillions of dollars in proposals are already igniting economic recovery and creating millions of jobs following the coronavirus pandemic.

Biden and his aides say they believe that gaining the support of the majority of Americans — as well as Republican governors, mayors and local officials across the country — could help them secure the backing of congressional Republicans or even give Democrats momentum to push through the plans on a party-line vote.

“We’ve turned the tide on a once-in-a-century pandemic. Now we’re faced with a question. What kind of economy are we going to build for tomorrow? What are we going to do?” Biden said. “I believe this is our moment to rebuild an economy from the bottom up and the middle out. Not a trickle-down economy.”

Back in Washington, Senate Republicans sent Biden their latest proposal on Thursday, but the $928 billion infrastructure plan is still hundreds of billions less than the White House’s last offer of $1.7 trillion.

Biden told reporters that he spoke briefly on Thursday to Sen. Shelley Moore Capito (R-W.Va.), who is leading the infrastructure negotiations, and planned to meet again with Republicans next week.

“I told her we have to finish this really soon,” he said. “We’re going to have to close this down.”

Biden has been pushing Republicans to support a combined $4 trillion in spending for weeks, but he is prepared to back a congressional maneuver that would allow Senate Democrats to pass legislation without GOP support.

The president feels emboldened by Americans’ support for his proposals, including the popularity of the American Rescue Plan, saying his plans are already helping the U.S. come back from the pandemic-induced economic downturn. He is touting the 1.5 million new jobs and a drop in unemployment claims of more than a third, the lowest since the pandemic started.

“Covid cases are down. Covid deaths are down,” he said. “Unemployment filings are down. Hunger is down. Vaccinations are up. Jobs are up. Growth is up. People getting health coverage is up. Small-business confidence is up. Put it simply, America is coming back.”

Before the president left for Ohio, the White House released a new memo from senior adviser Mike Donilon with the subject line “The American People Stand Behind President Biden’s Middle Class Economic Vision.”

“As we turn the page on this dark chapter in America’s history, we stand at an inflection point about what kind of economy — and country — we want for ourselves and for future generations,” Donilon wrote. “The American people understand that the economy we had before the pandemic left far too many people behind, and that more and more families were finding that their grip on a middle class life — and the security it affords — was precarious. They know we can’t afford to simply turn the clock back to where we were.”

Before his speech, Biden visited the college’s tech center, where he learned about student certification programs and examined a robotic arm. Several dozen students, some masked, gathered to hear his speech. A large sign was erected on one side of the room saying “Blue Collar Blueprint for America.”

“We must be No. 1 in the world to lead the world in the 21st century,” Biden said. “It’s a simple proposition and the starting gun has already gone off.”

Republicans have been resistant to the size and scope of Biden’s pair of spending proposals: the American Jobs Plan, a sweeping $2.3 trillion package designed to fix the nation’s crumbling roads and bridges, create jobs, and tackle climate change; and the American Families Plan, a $1.8 trillion plan to fund Democratic priorities, including billions of dollars on child care, prekindergarten, paid family leave and tuition-free community college.

The White House on Friday reduced the size of its jobs plan to $1.7 trillion, largely by shifting spending elsewhere, but Republicans balked at the counteroffer. They reduced the amount to $928 billion on Thursday, up from their initial proposal of a $568 billion plan.

Many Republicans have already expressed opposition to the ways Biden wants to raise money, including taxes on corporate and wealthy Americans. Conservative groups have launched a campaign criticizing his proposal to hire nearly 87,000 new IRS workers over the next decade to collect money from tax cheats. Meanwhile, Democrats are resistant to tapping leftover Covid relief money, which the White House maintains isn’t sufficient to cover the plan, anyway.

“We had no problem passing a $2 trillion tax plan that went to the top 1 percent that wasn’t paid for at all,” Biden said. “But every time I talk about tax cuts for working-class people, it’s, ‘Oh, my God, what are we going to do?’ Well, we’re going to take back some of that 1 percent money.”

Some Democrats are pushing him to proceed with what they can pass without Republican support, but Biden aides and allies have signaled they are willing to negotiate a few weeks past his self-imposed deadline of Memorial Day. To pass the bills, all Democratic senators must support it. But some moderate Democrats, including Sen. Joe Manchin of West Virginia, want to keep negotiating.

Biden had planned a campaign rally at Cuyahoga Community College in March 2020 but it was scrapped because of the pandemic. He recalled the day.

“Life in America had changed. A long dark year was about to descend on us,” he said on Thursday. “Fourteen months later, we finally made it to campus. After a year of darkness, we’re finally coming to light.”

It is his second visit to Cleveland since being sworn in.

The League of Conservation Voters launched a $40,000 ad campaign around Cleveland timed to Biden’s visit, to push for a package focused on climate and clean energy.