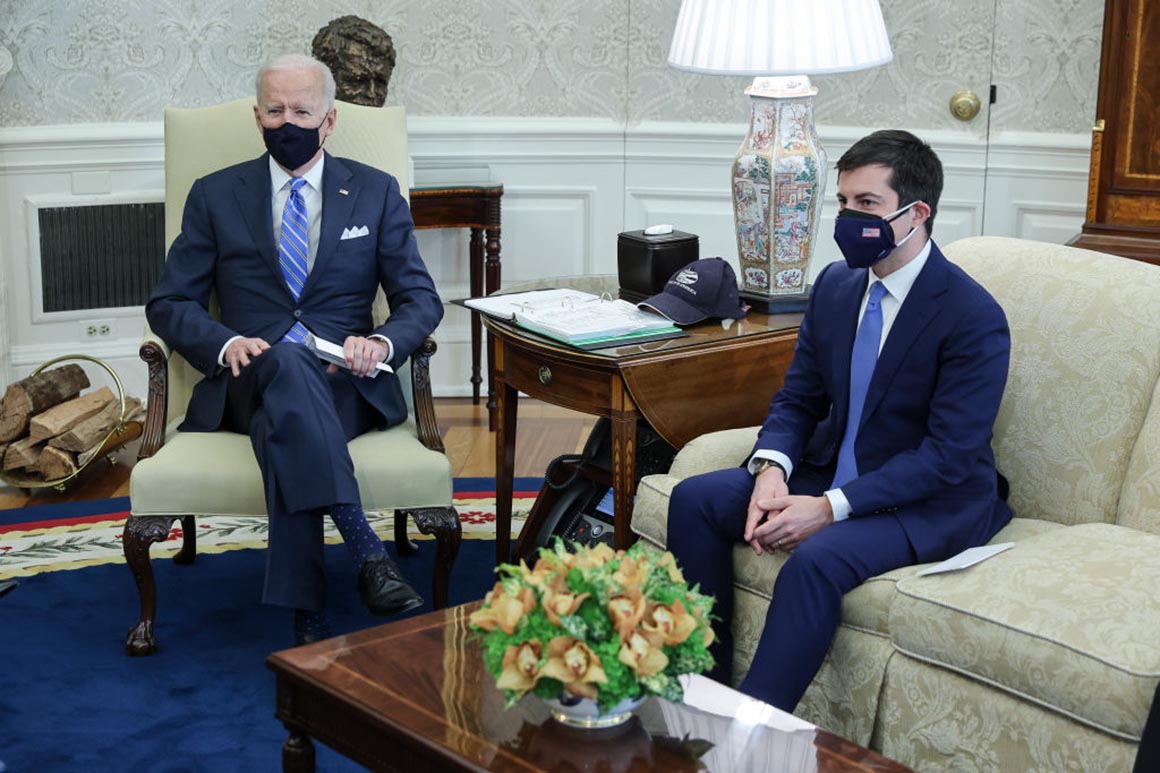 The Biden White House is aware how hard it will be to convince congressional Republicans to support an ambitious infrastructure and jobs proposal.

And so, they’ve enlisted other Republicans to help them do the convincing.

Over the past few weeks, senior White House officials, Cabinet members, and President Joe Biden himself have held dozens of calls or meetings with local Republican leaders to talk roads, bridges, and modern infrastructure investments. Much of the outreach has been done in private, with the White House not providing readouts of what was discussed. But in conversations with more than a dozen local officials familiar with the White House’s efforts — including those on the receiving end of the outreach — a few themes emerge. Chief among them is that the White House wants local GOP mayors and governors to convince their Republican representatives in Congress of the need to back the president’s proposals.

“One of the things that I think can reach members here in Washington is the fact that they’re all from somewhere, and when they’re speaking to their communities — and especially their mayors — they hear about the different ways that this would actually impact the communities that they represent,” Transportation Secretary Pete Buttigieg said in an interview.

The local leaders described a White House strategy that attempts to harness the outrage these leaders feel over the infrastructure crises they’re facing and Congress’ sluggish response to it. In the calls and meetings, the White House has tiptoed around how to pay for their $2.3 trillion plan, avoiding discussions about the tax hike proposals unpopular with Republicans. In some of the conversations, administration officials conveyed that they understood that discussions over revenue raisers could imperil a bipartisan package.

The White House is hopeful that these talks can help build public support for the package. And while they’re generally not making explicit requests for local Republicans to lobby their members of Congress, they’re encouraging it when the questions come up. They aren’t distributing talking points to local GOP leaders, preferring that the officials settle on their own arguments for the necessity of the package. But they have suggested methods for getting through to Washington politicians, providing them room to vent about what it’s like to be on the front lines in cities battling flooding, crumbling bridges, antiquated transit systems or lack of broadband access. When the officials write op-eds, shoot videos or talk up infrastructure spending plans, the White House has collected them and blasted them out to the media.

“I am a registered Republican, but I am very fed up with the polarization and the demonization, and the quagmire that Washington D.C. seems to represent these days,” said Nic Hunter, mayor of Lake Charles, La. Hunter introduced Biden at an infrastructure event earlier this month. The president this week personally called Hunter to extend help after severe flooding in recent days. “We have needed a new Interstate 10 bridge for 30 years and in 30 years that has included Republican and Democratic presidents and Republican and Democratic governors. Everyone that wants to immediately shoot down a proposal just because it came from the other side, I would ask them, ‘where was your side’s proposal over the last 30 years?’”

Even if the local lobbying effort doesn’t flip any congressional GOP votes, broad buy-in from state-based Republicans like Hunter has given Biden fodder to push even more aggressively on an infrastructure plan.

The White House has routinely insisted that there is bipartisan support for its plan by pointing to these officials as well as polling that shows Republicans voters back the initiative.

Administration officials say they mapped out their approach to engaging with the hundreds of local GOP officials — first through national organizations, including committee chairs at the state, county and local levels — by zeroing in on places that are most in need of help. While the conversations start out broad, state and local officials will often start identifying specific needs in their communities — pointing to an aging bridge, a two-lane road that needs to be widened to four, or more lanes for bikes or charging stations for electric vehicles.

“Every mayor has got a list an arm’s length long of things that are not just nice to have, but really needed in terms of infrastructure repairs, improvements and extensions,” said Buttigieg, himself a former mayor. “And the chance to get federal dollars to do it at a level not seen in a very long time is a really compelling way to deliver on a lot of mayors’ visions for their communities. Enlisting them to help tell their stories has been a really important part of this outreach.”

On the one hand, Biden’s strategy is nuts-and-bolts, old-fashioned politicking. But after “infrastructure week” became a punchline under former President Donald Trump, the sprawling outreach effort is also meant as a sign that this White House is taking the matter seriously — and winning over some converts in the process.

Acquanetta Warren, mayor of Fontana, Calif. was part of a group of stakeholders who met with Trump in the White House to talk about passing an infrastructure plan. Then, she said, it was difficult to get bipartisan momentum.

Last month, Warren was among a group of mayors on a video call with Biden and Vice President Kamala Harris. She has since called and left messages with every U.S. senator, asking them to sign on to Biden’s infrastructure plan.

“They were up front with us. They said, ‘we want to work with all of you.’ They made it clear, they wanted input from everybody,” Warren said. “We need infrastructure. It’s worse than saying this town is falling apart, this nation has a disgraceful record in maintaining all of the money we put in bridges, freeways, overpasses and streets.”

From an antiquated lock and dam system in an Iowa river town, to the need for traffic relief and broadband expansion in Fulton County, Ga., local leaders across the country say they can not afford to keep up with basic infrastructure needs.

And while those officials who have spoken to the Biden White House said they want it to strike a deal with Republicans, a handful of them went even further. If their own party doesn’t agree on a deal, they said, Democrats should go it alone.

Giles went on to echo comments from about a dozen GOP officials, when he pointed to the demands on work and schooling from home during the Covid-19 pandemic as reason for why Biden also was right to think of infrastructure as more than just roads and bridges.

“I am in favor of the expanded definition of infrastructure. We all have lessons we’ve learned from the pandemic,” Giles said. “We all have the ‘aha’ moment of the digital divide.”

The White House’s current outreach effort is similar to the one it launched to pass a $1.9 trillion Covid relief package earlier this year. With infrastructure, however, there is even more opportunity to sell the overall proposal by highlighting local needs.

“We want to educate and engage and then we want to empower these folks to go out into their communities, whether it’s the elected officials or their constituents, and talk about how the president has real plans to deal with the power grid, to deal with housing, to deal with broadband and all of these things,” said Gabe Amo, deputy director in the Office of Intergovernmental Affairs, a clearinghouse for engaging with state and local officials.

Amo said he spoke last week with a Republican Utah mayor who mentioned that she frequently exchanges messages with GOP Sens. Mitt Romney and Mike Lee. “She said, ‘should I bring this up?'” Amo said. “And I said ‘of course you should bring it up.’”

Yet, while there’s broad agreement in towns and cities on the need for more spending, there’s growing angst that the White House and Senate Republicans remain far from striking a deal on a massive infrastructure bill. GOP leaders have suggested that they’d support a bill in the $600 billion to $800 billion range that covers only so-called traditional infrastructure and that is financed with unused Covid relief funds and user-fees. The White House has recoiled at those pay-fors and is not on board with that small of a package.

“This is too big to ramrod through,” said Bob Gallagher, mayor of Bettendorf, Iowa. “There’s probably 80 percent of us that are somewhere in the middle and there’s 10 percent on the far right and 10 percent on the far left that scream the loudest and create the most havoc. But the rest of us would like to have our politicians sit down and hammer out something that makes sense.”

Several other mayors agreed that getting an infrastructure bill passed was too important not to happen. “Getting nothing done is not a great alternative,” said Republican Jeff Williams, the mayor of Arlington, Texas.

For some, that was true even if congressional Republicans didn’t sign on.

“When I’m trying to get something passed by the city council — where we have nine members — I work on five votes. I get six, seven or nine, that’s nice. I’m focused on five,” said James Brainard, the longtime mayor of Carmel, Indiana.

Brainard — who recalled touring his city with Buttigieg when the young mayor was just getting started in South Bend — says he’s in frequent touch with the administration, and spoke with Buttigieg before he was formally announced as the Transportation secretary.

“I’ve got that contact, but I try to leave him alone right now. He’s busy.”