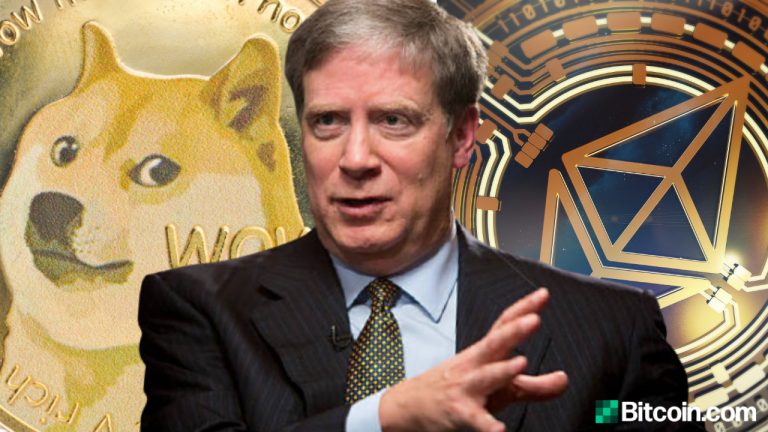 Renowned investor Stanley Druckenmiller has shared his views on dogecoin and ethereum. He said he wouldn’t long or short dogecoin and laughs when the meme cryptocurrency rises in value. As for ether, he is skeptical whether it can hold its position.

Stan Druckenmiller on Dogecoin and Ether

In an interview with The Hustle last week, famed investor Stanley Druckenmiller shared his thoughts on bitcoin, ether, and dogecoin, the meme cryptocurrency that has recently taken the market by storm.

Druckenmiller founded Duquesne Capital in 1981. He managed money for George Soros as the lead portfolio manager for the Quantum Fund until 2000. He and Soros made massive profits betting against the British pound in 1992.

The billionaire investor said that dogecoin “is just like NFTs [non-fungible tokens]. It’s a manifestation of the craziest monetary policy in history.” He added: “I think since there’s no limit on supply, I don’t really see the utility of it right now. It’s just this wave of money in the Greater Fool Theory.” Druckenmiller opined:

Now having said that, I wouldn’t short it because I don’t like putting campfires out with my face. So I just try and pretend DOGE doesn’t exist. I think so little of it, it doesn’t even bother me when it goes up.

He continued: “When bitcoin used to go up, I’d go crazy because I didn’t own it. When dogecoin goes up, I just start laughing. Don’t go long and don’t go short. I mean, you know, unless you like going to Vegas, then I guess it’s okay.”

On the subject of bitcoin vs. ethereum, Druckenmiller said, “I think bitcoin has won the store of value game” because it is “a brand, it’s been around for 13-14 years, [and] it has a finite supply.” On whether other cryptocurrencies will replace bitcoin, he reiterated that BTC is “going to be very, very tough to unseat.”

While acknowledging that “the lead in smart contracts and that kind of stuff would be ethereum,” he noted:

I’m a little more skeptical of whether it can hold its position. It reminds me a little of Myspace before Facebook. Or maybe a better analogy is Yahoo before Google came along.

He described, “Google wasn’t that much faster than Yahoo, but it didn’t need to be. All it needed to be was a little bit faster and the rest is history.”

What do you think about Stan Druckenmiller’s views on dogecoin and ether? Let us know in the comments section below.