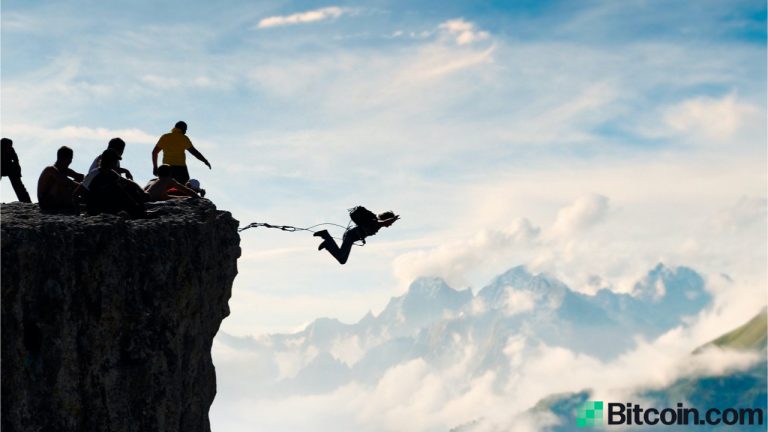 On Wednesday, cryptocurrency markets continue to drop lower in value, as the entire crypto-economy has plunged 17% below the $2 trillion mark and now rests at $1.801 trillion. Bitcoin, the leading cryptocurrency in terms of market capitalization, touched a high of $40,770 per unit at 4:48 a.m. (ET). A few hours after hitting that price range, the crypto asset tapped a low of $36,250 dropping over 11%.

Bitcoin (BTC) has lost considerable value during the last few days, alongside a great number of other digital assets that have seen price drops as well. The entire crypto-economy has slid over 17% during the past 24 hours and rests under the $2 trillion range at $1.801 trillion.

The second-largest crypto asset in terms of market cap, ethereum (ETH) has shed 23% during the last day and 26% for the week. ETH is currently trading for $2,545 per ether but ETH’s market cap still commands 18% of the entire crypto economy. Out of the top ten coins, the two biggest losers today include binance coin (BNB), a top ten coin that lost over 26% in a day, and dogecoin (DOGE), which lost 26% as well. While BNB is swapping for $385 per unit, DOGE is trading for $0.34.

Following the BTC drop below the $40k zone, a number of crypto executives and market strategists commented on the price slide. Monark Modi, the founder and CEO of Bitex says that there is heavy profit-taking at the moment and negative market sentiment in the air.

“Price volatility in bitcoin has been observed for a while now and the drop from the previous high of $63k down to $40k was expected,” Modi wrote. “Some other factors contributing to the drop are also recent U-turn of Tesla in accepting the most popular cryptocurrency as payments. The investment scenario across the globe has been subdued owing to either government regulations like the ban on crypto trade by China or even closer home in India where investors are facing deposit and withdrawal challenges owing to rumours of financial institutions restricting transactions,” the Bitex CEO further stressed.

My #Binance portfolio. Last week vs this week.#Bitcoin #cryptotrading pic.twitter.com/77okD0k1Lx

Ulrik Lykke, executive director at crypto hedge fund ARK36 also spoke about BTC’s price dropping below the $40k region. “Crypto markets are currently processing a cascade of news that fuels the bear case for price development,” Lykke explained. “Last week, more than 250 billion USD evaporated from the Bitcoin market alone. In absolute terms, such a number may seem astronomical. In terms of percentages, though, such market moves are frequent and we have seen similar ones in the past. In 2017, price dives in the range of 35%+ happened several times before the price topped out,” the ARK36 director said.

#Cryptotrading Trends and the Expected ‘Real Peak of the Bitcoin Price’

Meanwhile, on Twitter, the hashtag trend #cryptotrading is trending on Wednesday with thousands of tweets about people getting “rekt” or otherwise “buying the dip.”

Crypto investors in APRIL vs MAY #Bitcoin #cryptocurrency #cryptotrading pic.twitter.com/Wmz4OFjffb

Quite a few crypto participants tweeted before and after images of themselves going from rich to poor in a month.

Ruud Feltkamp, CEO at crypto trading bot Cryptohopper says the leg down was to be expected and there’s been trading opportunities in altcoin markets.

“Bitcoin’s current selloff is something that we expected,” Feltkamp said in a note to Bitcoin.com News. “Every year we see that the trading activities decline from May and only really increase again from September. Bitcoin going down like this presents excellent opportunities for traders trading altcoins. If this bull run is a bit like that of 2017, then we expect the real peak of the bitcoin price at the end of this year around New Year’s Eve, after which we will see another Alt season in early 2022,” Feltkamp further noted.

All Eyes on Ethereum Markets

Joel Kruger, cryptocurrency strategist at LMAX Digital said his team is focused on ethereum (ETH) markets. “The shakeup in crypto markets has intensified into Wednesday, with Bitcoin dropping back below $40,000 for the first time since early February and ether (ETH) sinking below $3,000,” Kruger told Bitcoin.com News. “Bitcoin and ether are now off some 40% and 30% respectively from recent record highs,” the LMAX executive said. Kruger further added:

Our biggest concern with respect to the outlook right now, and particularly in reference to the price of ether, is that the monthly chart, as referenced in this report, is still showing the price of ether trading at severely overbought readings. This suggests there could be plenty more room for decline before ether finds its feet again.