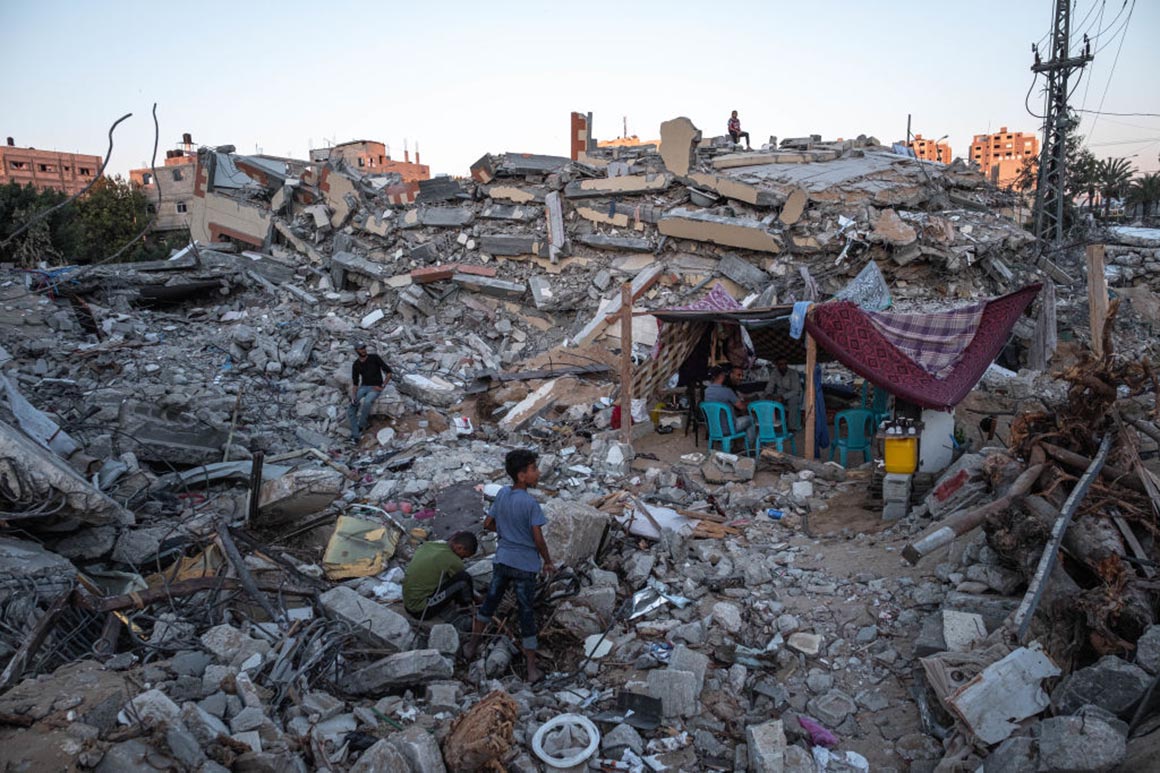 The race to help innocent victims of the Israel-Hamas conflict is on. The actual flow of dollars will prove more difficult.

The Biden administration’s effort to keep Congress onside and Hamas at arms length — while battling donor fatigue among foreign governments — is already at risk of derailing crucial assistance.

Secretary of State Antony Blinken announced $110 million in new economic assistance to Palestinians during a visit to Ramallah, the headquarters of the Palestinian Authority, including $5.5 million in immediate relief to Gaza.

Including commitments made in April, “we are in the process of providing $360 million in urgent support to the Palestinian people,” Blinken said.

But overall, the Biden administration’s commitment is $80 million down on the $440 million the Obama administration delivered to Palestinians in 2014, the year of the previous Gaza conflict.

U.N. humanitarian workers on the ground in Gaza told POLITICO that it will take weeks to know how much money is needed to repair damage inflicted on thousands of buildings during the May conflict, and that the hidden cost of the conflict is much higher than the physical toll.

“The biggest need is mental health,” said Matthias Schmale, the Gaza director of the the United Nations Relief Works Agency for Palestinian Refugees (UNRWA) — the main U.N. agency working in Gaza — in an interview. “You cannot live through four wars and think it doesn’t affect you.”

Schmale fears the U.S. legal framework — which designates Hamas as a terrorist organization, and limits what funding can be offered to the Palestinian Authority — will slow down, or even prevent, the swift delivery of the promised aid.

The urgency of Gaza’s day-to-day challenges are not in dispute: In addition to the toll from the latest round of bombing, which includes more than 240 deaths and 6,000 people made homeless according to a U.N. tally, up to 1 in 20 Gazans have been infected with Covid-19 in recent weeks.

Blinken’s remarks Tuesday signal the administration’s difficulty in balancing humanitarian need against the legal and practical hurdles to working with Palestinian organizations — to say nothing of the political considerations at play.

“We will work with our partners to ensure that Hamas does not benefit from the reconstruction assistance,” Blinken said, but did not offer further details.

George Washington University’s Nathan Brown, a Middle East expert, said in an interview that effective channeling of emergency aid usually depends on cooperation with local political authorities, in this case Hamas. Brown added that the Biden administration is partly responsible for its dilemma: by doing too little to stop the April postponement of Palestinian elections, which almost certainly would have weakened Hamas’s political grip on Gaza. “We would not be in this position if the administration had acted differently,” Brown said.

Speaking to reporters Monday, a senior State Department official said the administration would be “working in partnership with U.N. and Palestinian Authority to channel aid to the people who need it most.”

But there are hurdles here, too. The funding request to Congress announced by Blinken will be governed by the 2018 Taylor Force Act, which severely restricts U.S. funding for the Palestinian Authority on the grounds that the authority makes payments to Palestinian prisoners (and their families) convicted of terrorist acts. Under the Act’s terms, wastewater and children’s vaccinations are the only project categories that could be funded via the authority in Gaza.

A spokesperson for Foreign Affairs Committee Republicans said committee members are waiting on further information from the State Department and declined to comment on the funding request.

Schmale, the U.N. official, cast doubt on the practical ability of the U.S. and other governments to partner with the Palestinian Authority in Gaza. “The Palestinian Authority has no credible or functional presence” in Gaza, Schmale said. The authority is based in the West Bank and “if you want to get things done in Gaza to scale” — without routing the money through Hamas — “the only avenue is UNRWA,” he said.

The Trump administration ceased UNRWA funding in 2018, but Biden has reinstated $150 million in annual funding to the U.N. agency — once again becoming its biggest donor — which provides emergency food and health care to nearly 2 million Gazans and basic education to around 500,000 children.

Blinken’s announcement Tuesday would deliver $32 million out of the $38 million requested in UNRWA’s global emergency appeal.

To the extent that Congress blocks aid delivered through UNRWA or the Palestinian Authority, the administration may need to turn to non-profits such as Anera (American Near East Refugee Aid) to be a frontline provider of American aid, or leave other essential work to foreign governments.

The State Department admits it is battling “donor fatigue” among foreign governments as it rallies a joint international reconstruction effort in Gaza.

Middle Eastern government donations to UNRWA surged when the Trump administration withdrew U.S. funding in 2018, to $334.7 million that year, according to an UNRWA budget breakdown seen by POLITICO. In 2020, that dwindled to just $59 million.

Saudi Arabia cut funding from $160 million to $28.9 million, while Qatari assistance dropped from $51.5 million to $8 million. The United Arab Emirates — which recognized Israel for the first time in signing the Abraham Accords — made the most severe cut: from $51.8 million to just $1 million, preferring to deliver in-kind assistance through organizations such as the Emirates Red Crescent. U.N. officials said they believe that some aid from Middle Eastern governments had been rerouted from UNRWA to Hamas.

Other governments such as Canada committed additional funding to assist Palestinian refugees during the Covid pandemic. John Babcock, spokesperson for Global Affairs Canada, said that while the Canadian government is “profoundly concerned” about the humanitarian crisis in Gaza, the $90 million in Canada announced for UNRWA in December 2020 would support “new and emerging need from humanitarian emergencies, including the COVID pandemic and the May 2021 conflict.”

Norway, the world’s most generous aid donor per capita, is the first government to make a specific commitment to increased humanitarian assistance. Norwegian Foreign Minister Ine Eriksen Søreide told POLITICO “we will increase our humanitarian support in Palestine to a total of more than $12 million in 2021,” which will be distributed in coming days via the Red Cross, UNRWA, the Norwegian Refugee Council, and Norwegian Aid Committee.

The Norwegian government said it would also use its chairmanship of the Ad-Hoc Liaison Committee — a body set up under the Oslo Accords to bring aid donors together with Israeli and Palestinian authorities — to focus funding on essential services, Covid containment, and “rebuilding vital civil infrastructure.”

Many of Gaza’s humanitarian problems can’t be solved with money: They require a political solution.

Fifty-six lawmakers are urging Blinken to lobby Israel to keep two border crossings open — the Erez and Kerem Shalom crossings, which have been periodically closed since the ceasefire was in place — so that critical humanitarian personnel and supplies could reach Gaza.

That access matters for managing the pandemic. Just 5 percent of the Palestinian population has been vaccinated, and in Gaza “there’s been no vaccination in the last two weeks,” the U.N.’s Schmale said, as residents focused instead on basic survival. “For two weeks people just huddled together. We heard so many stories of families saying: ‘yes, we are eight people sharing one mattress. But if they get us, we want to die together,’” he said.

Aid alone won’t save Gaza. Experts say that the only solution is to find a path to re-open Gaza’s economy: allowing its entrepreneurs to export, or permitting more than the current 7,000 Israeli work-permit holders to travel into Israel for work, to cut the 45 percent unemployment rate.

Food security will be among the hardest problems to solve. Today, around one-quarter of Gaza’s fertile agricultural land can’t be farmed because it is designated an Israel-controlled security buffer zone, and the fishing rights of Gazans are limited to a small proportion of what was granted to them under the 1993 Oslo Accords.

Schmale remains hopeful that this post-conflict phase could be different from those of previous conflicts. ”What does life living next to each other in dignity look like?’ That’s the real question,” he said. “I’ve spoken to many young people who feel they have now got another chance at life. There is a genuine desire to try something new.”