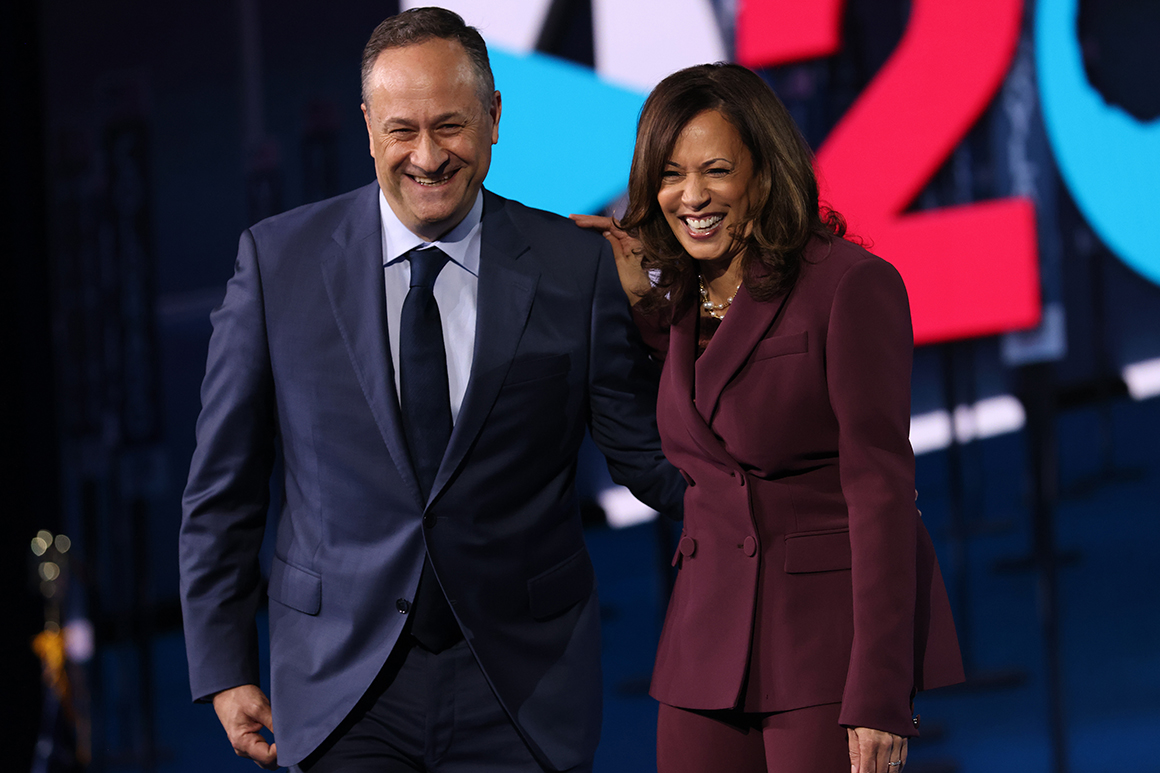 ANNAPOLIS, Md. — Old Fox Books & Coffehouse in Annapolis is homey and quiet. Connected to a coffee shop and housed in an old building, its walls are a bright blue, the floor is wood, and there is a huge red rug in the center. It’s the type of place that could very well serve as a setting for some cheesy romantic comedy, where the guy stumbles upon the girl, or the girl walks into the guy as they reach out to grab the same obscure mid-20th-century French novel they’re both there to purchase.

On Tuesday, there was no budding romance amid the packed book shelves at Old Fox — at least that we know of. But there was a prominent political spouse.

Doug Emhoff, husband of the first woman vice president in history, walked into the shop maskless, there for an off-the-record stop to grab some coffee and buy a book. He gave off what’s becoming known as big Doug energy: a huge grin on his face and a vibe that says, essentially, ‘Hey, I’m just happy to be here.’ After exchanging pleasantries with owner Jinny Amundson, Emhoff told her he’d been “wanting to get this book and I’ve been wanting to ask an independent bookseller if they have it.”

Amundson appeared a mix of thrilled and nervous. It’s not every day that Vice President Kamala Harris’ husband, the second gentleman of the United States, requests a special order. Her bookstore has a modest collection. What if she didn’t have it?

But Emhoff wasn’t looking for a book about some wonkish domestic policy agenda or a foreign entanglement. He asked, instead, if Amundson had Seth Rogen’s memoir. (Yes, that Seth Rogen.)

Amundson laughed internally, she recalled later, because it was — well — all so unexpected. She definitely did not have it.

Denied his preferred literary adventure, Emhoff laughed, pulled out his credit card and told her to pick out a book for him, wrap it up, and not tell him what it was. Amundson wrapped up “Seven Kinds of People You Find in Bookshops.” 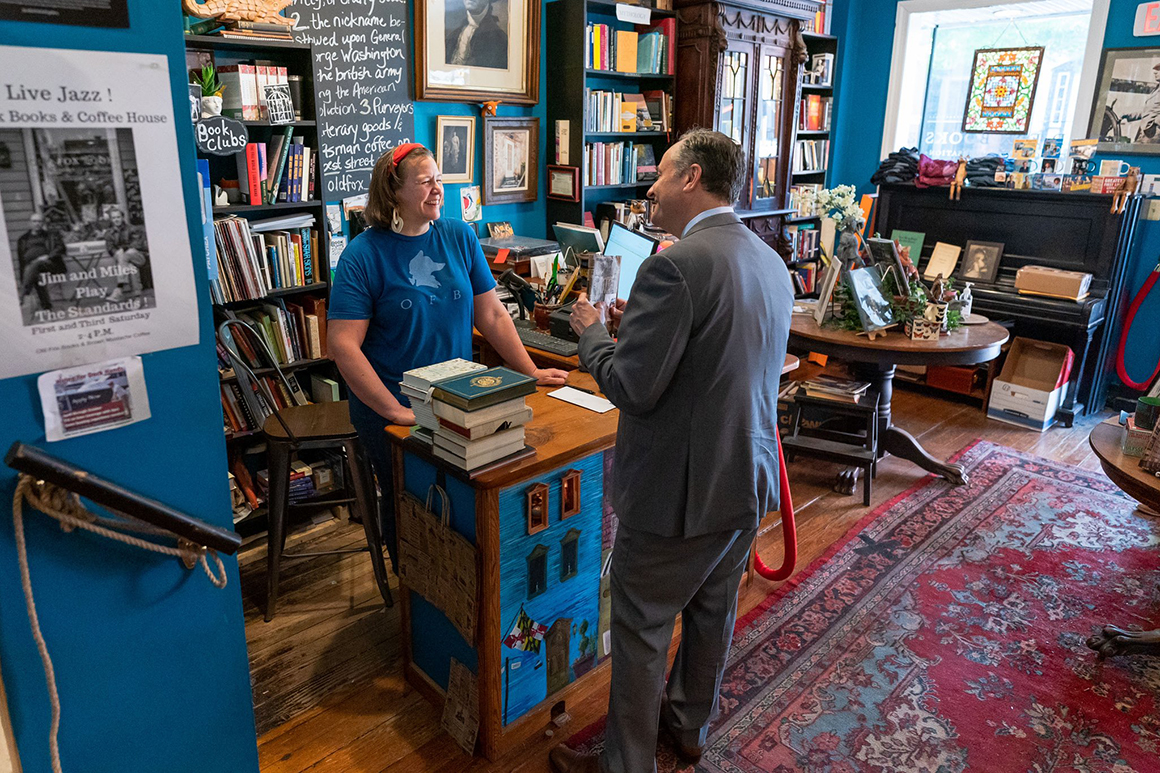 Fun Doug had lost out to serious Douglas once again.

The tale, recounted by Amundson and the owner of the coffee shop, was a distillation of life being the first second gentleman in history. Emhoff is an historic figure in his own right, a smart and accomplished entertainment lawyer who is using his perch to get more vaccines in arms, bring more attention to food insecurity and local businesses decimated by the pandemic. But, he’s still just kind of a dude.

Aides say he didn’t want a life in the public eye. But he’s also amenable to doing the political work that comes with the post.

Each vice presidential spouse has tackled the job a bit differently. But there’s a fairly common blueprint. You support the veep, host parties (usually in gowns made in America), choose a non-controversial platform — helping disadvantaged kids or veterans or children victimized by bullying — team up with the first lady on another non-controversial policy area, and repeat for four more years if there’s a second term.

Still, if Emhoff sometimes seems like he’s making things up as he goes along, it’s because he (and every second spouse before him) is.

“There is nothing in the Constitution about the first lady and there’s certainly nothing about the second lady or second gentleman. So they have a lot of leeway to do as much or as little as they want,” said Kate Andersen Brower, author of “First Women: The Grace and Power of America’s Modern First Ladies.”

Emhoff’s staff isn’t trying to reinvent the wheel. When he began envisioning what his role might look like, he met and talked with the sorority of women that came before him — especially the current first lady, Jill Biden. “He is not the first second spouse, so many of the things he will be doing are things that have been done before,” Emhoff’s chief of staff Julie Mason told POLITICO. “Some of them might be new to him.”

But Emhoff also isn’t just another spouse to a sitting VP. He’s the first with XY chromosomes. And how he adds his own “Douggie” flair to the gig will set the template not just for future second gentlemen, but also for male spouses of powerful women across the country. Aides say Emhoff is cognizant of how important it is for kids (and adults) to see a man fully embrace the concept of being a supportive husband to a powerful woman while shaking up outdated gender stereotypes. It’s given an additional weight to his role.

“I hope it normalizes that we as a country have gotten to a point where we’re comfortable seeing a man in that position supporting his wife,” Andersen Brower said. “And at the same time, we have to kind of calibrate how excited we are about it, because it is so absurd that it’s taken us this long.” 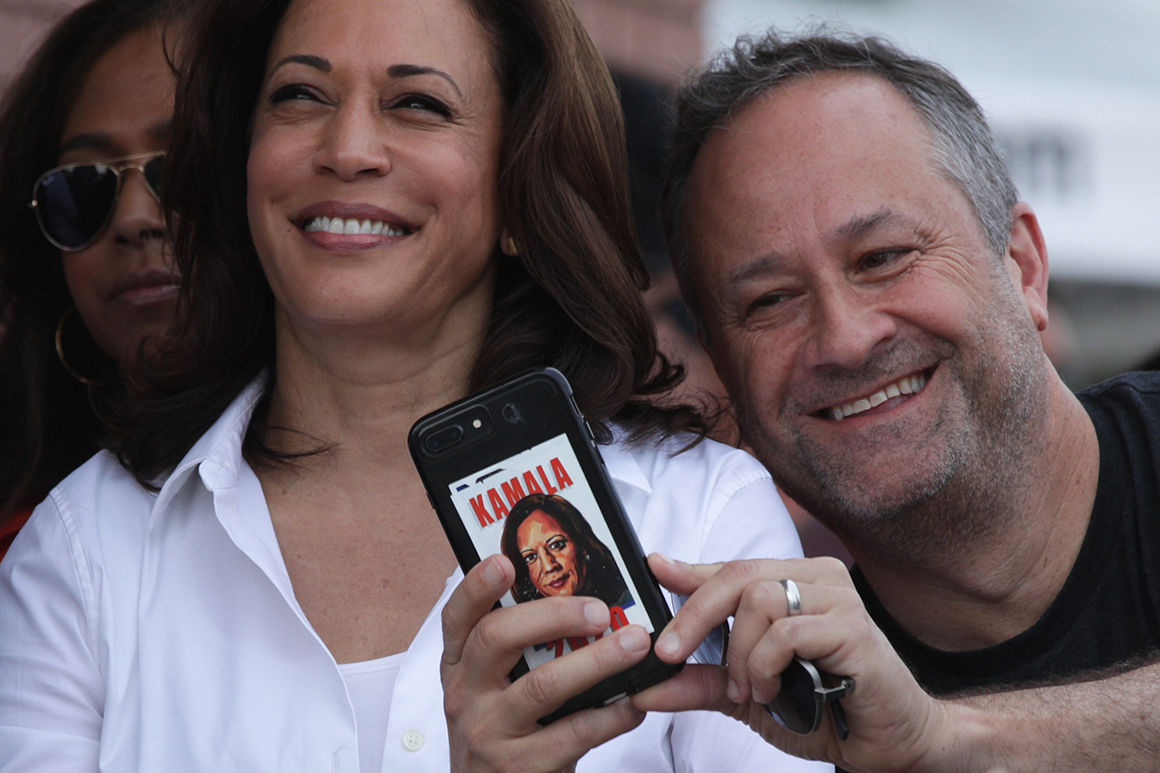 The role-modeling began after the election. Emhoff quit his own high-powered job (which accounted for most of the more than $1.6 million the couple raked in last year) for a one-class-a-semester teaching job at Georgetown University; his first in-person class begins in August. And then, as he built his team — a small group of nine — the focus was first on playing cheerleader.

“We came in here and the first thing he did was raise his hand to see how he could be helpful with the pandemic response and recovery,” Mason said. “He was not elected to office. His No. 1 job is to support the vice president, to support the administration.”

As soon as the administration began, Emhoff was dispatched to dozens of events — many in-person, including visits to small businesses and vaccination clinics. Often, he promised to take back the conversations he had there to the Naval Observatory, where he and the vice president now live. As he’s done these events, Emhoff has also worked with his team to figure out what his own platform might be. Aides say they aren’t in a rush and it’s typical for there not to be an announced initiative this early in the administration. But outside of vaccinations, there’s one policy area Emhoff seems more interested in than others: food security.

Almost every roundtable or stop has something to do with food and nutrition, something that even during the campaign was a focus. As he visited food banks, aides say he was struck by the lack of equity and access.

Back in February, when now-Secretary of Agriculture Tom Vilsack was being virtually sworn in by Harris, he said he talked to Emhoff, who had called to congratulate him on his confirmation. Vilsack told Harris, “We want to get him involved in nutrition,” to which Harris replied that her husband “cares a great deal about that.” Senior Emhoff aides say it’s almost a sure thing that food security will end up being an initiative as he charts out his role in more detail. But his involvement on the topic is still in the planning stages.

But being a supportive spouse with a passion for food security hasn’t been without its challenges. Emhoff is the only one of the “four principals” — as aides refer to the Biden and Harris couples — with limited experience in public life. And that has required some adjustments.

Maryland Attorney General Brian Frosh, who shared a coffee with Emhoff near the water in Annapolis last week, said Emhoff mentioned to him how weird he found the bubble that now surrounds him. He noted the need to make “appointments to see your children.” Even the things that look spontaneous to the outside — like a quick stop at a precious independent book store — now take extensive planning and scheduling.

“There’s definitely a period of adjustment in learning how the systems operate here,” Mason said. “You can’t always do things as much on a whim as maybe you would have before.” But, she said, Emhoff has never complained to the staff about it. 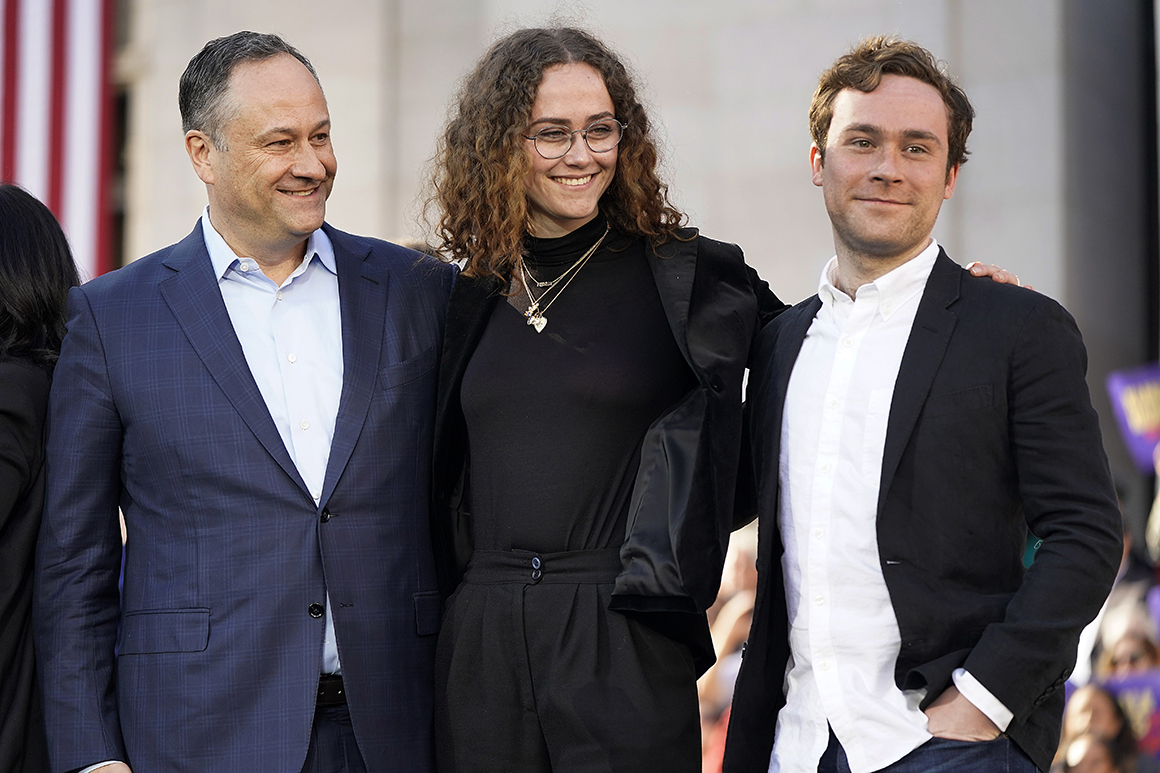 To maintain a semblance of normalcy in his life, Emhoff holds scheduled Zoom calls on a regular basis with his family, and has gone out to see D.C. on the weekends with friends, Mason says. One of those friends is Chasten Buttigieg, husband of now-Secretary of Transportation Pete Buttigieg, who became close with Emhoff during the 2020 campaign. Buttigieg said the two still “trade texts quite often.” They sometimes talk about the platform Emhoff plans to build (of which food security has come up) or what they’re watching on Netflix. But typically they talk about the adjustments that come with their new lives.

“There’s still got to be that holy shit cloud, hovering over them. Like, wow, we’re really doing this. And he has to figure out how to build a platform, an office, a team and then also, like, make sure he’s being really supportive,” Chasten Buttigieg said in a phone interview. “But he seems very peppy, like he really wants to like ‘go, go, go, go, go’ and that comes with a lot of concern for getting the moment right.”

As he plays the role of supportive husband of a powerful woman — and adjusts to the responsibilities and attention that come with it — Emhoff has garnered a group of loyal fans of his own. #DougHive may not match the size, stature or aggressively defensive tone that Harris’ #KHive possesses. But that’s what comes when you’re proudly second fiddle.

“He lets her lead. That’s quite remarkable to see. And the fact that he’s a white male married to this strong Black woman, I think he knows what that means,” said Danielle Garrett, a musician and teacher in Pennsylvania and active member of the Facebook group titled “Doug Emhoff, Esquire: Our Second Gentleman.” The group, of more than 800 and counting, posts links about nearly every move Emhoff makes: from a picture of him with his daughter Ella at her graduation or moments like Emhoff sitting by himself before the joint session to Congress last month blowing kisses to Harris. (Grant posted that one with the comment “What a true gent!!” with three heart emojis.)

Emmoff’s “clearly just being himself,” Garrett said, which makes him the type of relatable figure that seems rare in politics.

It has not only served his wife well — it’s helped him, too. For proof: After he left her store, Admundson, the bookshop owner, said she went looking for a way to get the Seth Rogen memoir to Emhoff as soon as she could.