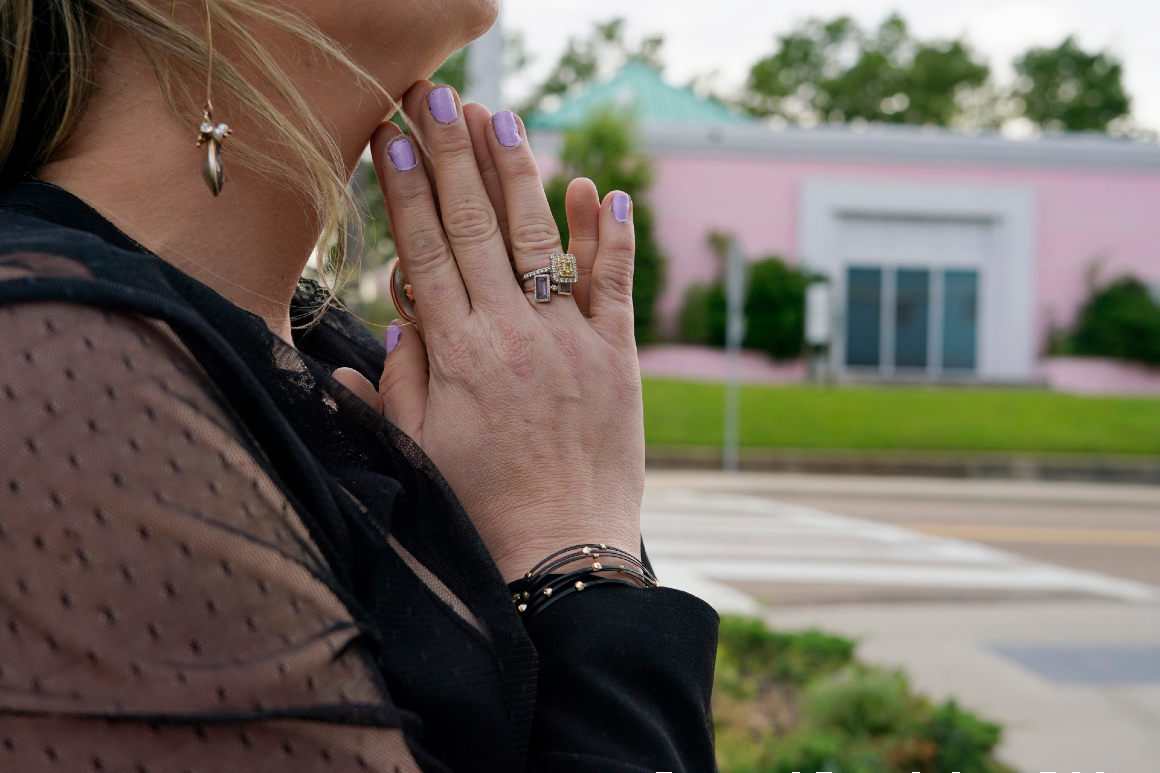 JACKSON, Miss. — Long before the funky restaurants and shops began to turn Fondren into Jackson’s trendiest district, the neighborhood’s landmark institution was a bright pink building, surrounded by a concrete and iron wall, 8 feet tall at its peak, that is Mississippi’s last abortion clinic.

Last week, the scene was more or less normal: The women seeking care would slowly turn into the parking lot, careful not to hit the protesters camped at the entrance who held signs preaching eternal damnation. Volunteers in rainbow-patterned vests ushered the women inside. Pop music blared from speakers to drown out the protesters, many of whom bring their own amplifiers.

The U.S. Supreme Court announced it would review the case known as Dobbs v. Jackson Women’s Health Organization, which is the formal name of the “Pink House.” The case concerns Mississippi’s 2018 ban on all abortions after 15 weeks of gestation. The law was blocked on appeal as an unconstitutional violation of Roe v. Wade; the landmark decision that afforded women the right to an abortion prior to viability, which is considered 24 weeks. The possibility that the newly conservative Supreme Court would take up a case that could challenge a standard that had stood since 1973, possibly replacing one landmark case for another, was cause for celebration among the state’s mostly male and mostly white lawmakers who have vowed to make Mississippi, in the words of a former governor, “the safest place in America for an unborn child.”

“Obviously the court has changed over the last four years, but that’s not why the case is being heard. I think the case is being heard because the science has changed over the last 50 years when Roe was initially decided,” Gov. Tate Reeves said, referring to his belief that medicine has lowered the viability threshold. “For us to have the opportunity to present our argument and present the facts with respect to the improvements in technology and improvements in the science is just a very important step.”

The mood among those who have struggled to hold the line on abortion rights ranged from resigned acceptance to anger. They have watched for decades as Mississippi lawmakers have passed law after law that has whittled the number of abortion providers to a single outpost in the state’s majority Black capital city.

After U.S. District Judge Carlton Reeves, no relation to Gov. Reeves, overturned the 15- week ban in 2018, his ruling was upheld by the U.S. Court of Appeals for the Fifth Circuit in 2019. While waiting to see if the Supreme Court was going to take up the case, activists like Laurie Bertram Roberts, co-founder and executive director of the Mississippi Reproductive Fund, braced for the fallout.

“When they kept kicking it down the road, we were all like, ‘Yeah, this shit’s coming,’” Bertram Roberts said.

The question now is whether this case, brought by the state’s chief health officer Thomas Dobbs, will result in overturning Roe, which would automatically enforce Mississippi’s “trigger law” banning abortion in the first and second trimester. Five contiguous states in the South have similar trigger laws, potentially forcing women in Mississippi to travel hundreds of miles for treatment.

In Fondren, from the porch of a coffee shop with the clinic in view, a former Mississippian cursed the state’s leaders. Gaines Dobbins left for the West Coast four decades ago but frequently comes back to visit family and he still follows the state’s abortion fight. He and his wife regularly donate to Planned Parenthood, he said, because “I know how hard it can be.”

“If it wasn’t for the federal government and Roe v. Wade,” he said, “you wouldn’t have an abortion clinic down here.”

Beginning in 1991, Mississippi enacted a series of targeted restrictions on abortion providers, commonly referred to as “TRAP laws.”

That year, lawmakers required two appointments, with a 24-hour waiting period in between an initial counseling session and the procedure itself. In 1996, state law mandated women be given pamphlets with medical risks associated with abortion, including information that has been proven inaccurate. Structural requirements were also imposed on clinics in 1996, requiring that hallways be a certain width, ostensibly to accommodate a gurney. In 2007, the legislature passed a bill requiring minors to have a waiver from their parents. The bill also stated women must be given a copy of a sonogram or listen to a fetal heartbeat. In 2012, they tried to force doctors to have admitting privileges at nearby hospitals

The laws didn’t ban abortion, but they did have an effect.

In the late 1980s, Mississippi had five abortion clinics across the state. By 2008, only the “Pink House” remained. Five other states, including Missouri and Kentucky, have only one abortion provider.

In 2019, then-Gov. Phil Bryant signed the “heartbeat bill” into law, essentially banning abortions at six weeks gestation, before many women even know they’re pregnant. (Pregnancy weeks start on the last day of a woman’s last period, which is typically two weeks before conception. So, when a woman is six weeks pregnant, she may have just barely missed her period by a couple of days.) Just as had happened with the 15-week ban, a federal district court judge filed an injunction on that law and an appeals court upheld the decision.

Mississippi isn’t alone in its recent barrage of abortion bills. Since January 2021, there have been 546 abortion restrictions introduced across 47 states, according to the Guttmacher Institute. In many cases, the authors of the bills have expressed their desire to draft a bill that would attract the attention of the Supreme Court. Most of them don’t.

The bill that actually could impact a generation was written by Republican state Rep. Becky Currie, a nurse from a town with about 12,000 people located an hour south of Jackson. “Can you imagine how proud I am that my bill was picked, a nurse from Mississippi going to the Supreme Court?” Currie said last week. “It’s a huge deal.”

“After 15 weeks or four months of being pregnant, it’s just time to decide whether you’re going to carry that baby or abort it,” she said. “I hope that mothers decide at that point to carry it because you can feel the baby move and can see its heartbeat and, with technology now, you even know what the sex is. I think it’s plenty of time to make that decision … After four months, make up your mind.”

In Mississippi, in 2018, just over 99 percent of the state’s approximately 3,000 abortions were performed before 15 weeks, and three-quarters of them before nine weeks.

When the Jackson Women’s Health clinic first opened in 1995, it provided abortion services up through the end of 24 weeks, according to Izzy Pellegrine, Mississippi State University sociology doctoral student. With the changing of state laws so came changes in the clinic’s services. Today, the clinic provide the abortion pill (nonmedical abortion) up to 11 weeks and surgical abortion up to 16 weeks, essentially complying with a law that is not actually in force. By state law, Medicaid funds can not pay for abortions in Mississippi.

In short, even if the 15-week law were ruled constitutional by the Supreme Court, it wouldn’t substantially reduce the number of abortions actually performed in the state. But its impact could be significant if it undermines the viability threshold that was established with Roe v. Wade and was reaffirmed in the 1992 Supreme Court ruling in Planned Parenthood v. Casey. Under Casey, abortion restrictions would be considered unconstitutional if they placed “a substantial obstacle in the path of a woman seeking an abortion of a nonviable fetus.”

The “Pink House” is located in central Mississippi so women who live in the northern part of the state or on the Gulf Coast will often go out of state to seek abortion care because it’s quicker than making the drive to Jackson, Bertram Roberts said.

“There are so many barriers. I don’t think people really get a grasp on how many roadblocks people have to go through,” Bertram Roberts said. “There is no patient that doesn’t have to go through some hurdles to get to the clinic …The story of Mississippi and abortion that people never tell is that everybody don’t go to the damn ‘Pink House’ anyway.”

Most of the women who do go to the clinic, which provides care in addition to abortion, are Black, Bertram Roberts said. Nearly three-quarters of abortions in the state are for Black women, according to the CDC, the highest percentage by far of any state. The clinic draws from Jackson, which has a population of 166,000, and the nearby Mississippi Delta, both of which are majority poor and Black. Mississippi has the highest poverty rate in the nation.

Jarvis Dortch, executive director of the ACLU in Mississippi and a former representative of Hinds County, said, “It’s hard to get [state lawmakers] to connect that there are regular everyday folks and you probably represent a lot of them…There’s a huge disconnect up there. To get them to even acknowledge it is difficult.”

Though she’s glad the bill will be taken up before the Supreme Court, Currie, the state representative, doesn’t think it will overturn Roe.

“I don’t think the Supreme Court will mandate anything,” Currie said. “I think it will take it state by state.”

That’s an argument that comes from the top down.

Given Republican lawmakers’ long standing desire to put a bill before the Supreme Court, it might seem odd that having accomplished their goal, they do not expect the justices to overturn the ruling they despise. The explanation is that incremental steps might be just as valuable from a practical standpoint.

State Sen. Minority Leader Derrick Simmons, who has been an ardent supporter of a woman’s right to choose, said he would not be surprised, if the 15-week ban is ruled constitutional, that Mississippi tries again to push the heartbeat bill into law.

“It is my hope that the U.S. Supreme Court will not reverse the lower court’s decision declaring the 15-week ban unconstitutional. I believe, based on previous efforts, in the state of Mississippi and nationally that Republicans will come back with something to attack women’s reproductive rights,” Simmons said. “No matter what happens, they’re coming back.”

When asked if the six-week ban would be a possibility if the 15-week ban is upheld, Gov. Reeves said, “It’s hard to speculate on what a next move might look like. We certainly want to focus on what this particular law says and the argument that certainly supports, in our view, the court ruling in our favor. We’ll have to make that determination after oral arguments and after the ruling comes down.”

The issue that must be decided first, the one the Supreme Court will have to reckon with, is the question of viability and Republican lawmakers are making arguments that strain against medically accepted standards of care. The survival rate for a baby born before 24 is less than 50 percent, according to most medical experts.

“We know so much more today about the development of unborn children in the womb than we did in 1992, much less 1972,” Reeves said. “We have technological advances that allow us to detect when the heartbeat begins. We know the rate at which the brain develops. We know about lung development…The more the science changes and the more information we have, it becomes more and more clear, I believe, that the viability of the child outside the womb is certainly much, much younger than many believe.”

Michelle Colon, a local abortion activist and former clinic volunteer, doesn’t think Roe will be overturned either, at least not with this bill. She worries, however, that if the bill is upheld, it will begin an onslaught of similar bills “chipping away” at abortion rights.