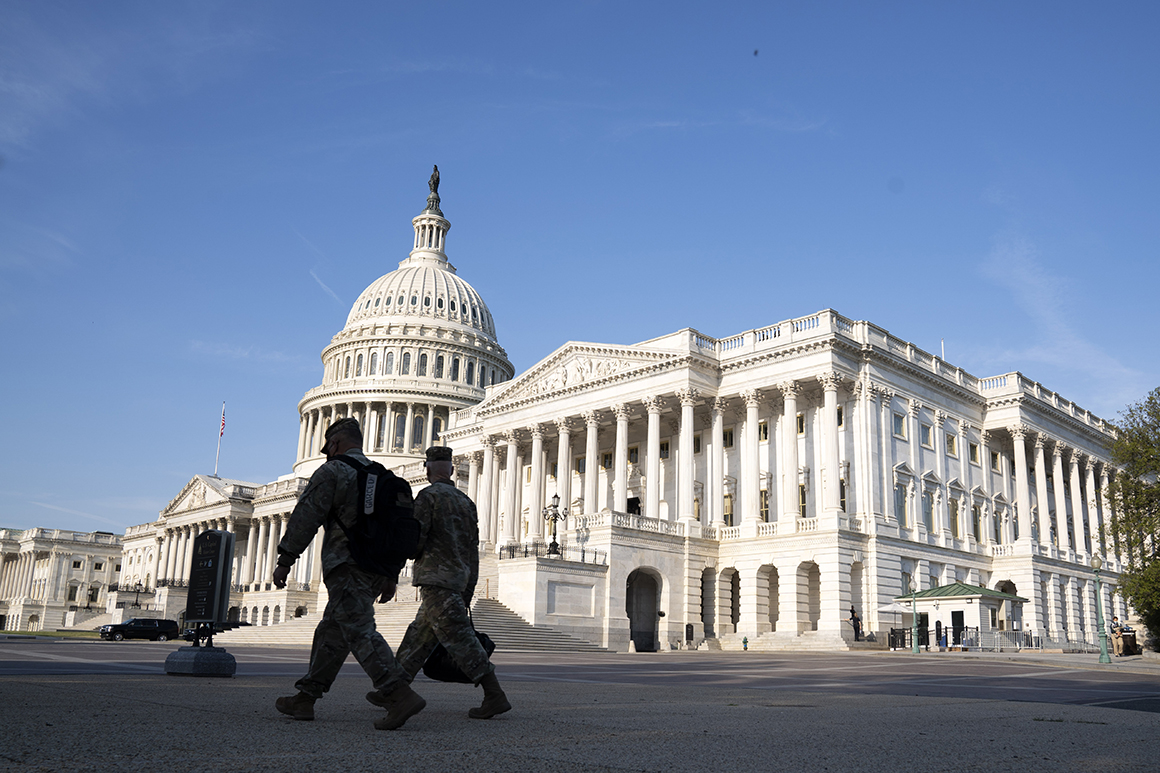 House Democrats on Thursday passed a $1.9 billion emergency funding bill intended to fortify the U.S. Capitol, overcoming last-minute resistance from a group of progressive members who objected to more cash for Capitol Police that did not include new accountability measures.

The tight 213-212 vote came after an eleventh-hour scramble on the floor, with Speaker Nancy Pelosi and her top leadership huddling with their members to resolve issues from the caucus’ far left. The group of liberal lawmakers, known as “the squad,” had objected to spending millions more dollars on the Capitol Police budget without more knowledge about whether some officers were indirectly complicit in the Jan. 6 riot.

After intense conversations with Democratic leaders on the floor, three progressives registered their discontent by voting present — Reps. Alexandria Ocasio-Cortez of New York, Rashida Tlaib of Michigan and Jamaal Bowman of New York. Three voted no: Reps. Ilhan Omar of Minnesota, Cori Bush of Missouri and Ayanna Pressley of Massachusetts.

“I am frankly tired of any time where there is a failure in our system of policing, the first response is for us to give them more money,” Omar said in an interview.

Omar, who has been a longtime proponent of policing reform, said she witnessed failures in “police preparedness and procedures and the lack of political will” to stop the rioters on Jan. 6.

“It is not clear to me how the supplemental addresses that,” she said.

Omar is one of several Democrats who raised questions about possible extremism within the ranks of Capitol Police after dozens of officers were investigated, and several suspended without pay, as part of a probe into the Jan. 6 riot.

In a joint statement released later Thursday, Bush, Omar and Pressley said they voted against the legislation because it did not provide enough funding for counseling and treatment for staff and directed more funding to a policing system they saw in need of reform. “This bill prioritizes more money for a broken system that has long upheld and protected the white supremacist violence we saw on display that day,” they said. According to the members, the bill needed to address the “organized and violent white supremacy, radicalization, and disinformation” that led to the attack.

Bowman said the Jan. 6 attack was “not due to a lack of police funding” and said Capitol officials needed to “investigate those who were complicit in this attack.”

“Pouring billions more into policing does not accomplish that goal,” he said.

Democrats had little warning that there would be issues with the bill. Concerns first arose on Wednesday, forcing the Democratic whip team to once again take the temperature of their members that night. The liberals’ fierce pushback surprised some members of leadership, according to multiple sources.

Progressives had also sought to ensure that Capitol workers outside of congressional offices were fairly paid as part of the funding bill.

“I think they were really voting based on what they thought was right,” said Rep. Pramila Jayapal of Washington, who leads the Congressional Progressive Caucus and did support the bill.

“We got to a yes at the end of the day because members understood there are some very good, important pieces in the bill,” Jayapal said.

The funding bill, one of Democrats’ biggest steps to date to respond to the insurrection, is unlikely to quickly advance in the Senate, where GOP leaders have disputed some of its provisions and complained that Democrats drafted the bill without enough input from their party.

Democrats say the money is sorely needed, particularly the tens of millions more dollars for the Capitol Police, a force that’s long been understaffed even before getting battered by the attack. With scores injured in the Jan. 6 attack and several of their own officers dead in the aftermath, the Capitol Police force is facing a morale crisis, which lawmakers have sought to address with back pay for overtime hours, hazard pay and retention bonuses, in addition to more equipment and better training.

The measure also includes long-term crisis planning elements, such as the creation of a new quick-reaction team that would essentially create a standing force of the D.C. National Guard, many of whom have been stationed at the Capitol for months.

“We can’t have an exodus of our cops who are getting beat upside the head by a lead pipe,” Ryan said, referring to a weapon used by insurrectionists against Capitol Police officers.

Democrats had been expecting a handful of Republicans to back the bill, according to multiple sources, but that GOP support vanished when Democrats began having issues with the vote count on their side.

Every Republican ultimately voted no, as recommended by their leadership — a far cry from the 35 GOP lawmakers who bucked their party to support a panel investigating the events of Jan. 6 one day earlier.

One of the GOP’s chief complaints is that Democrats are moving too quickly on the bill. Several Republicans have also complained that the new quick-reaction team would fall under control of the Guard rather than the Capitol Police.

“By choosing to forge ahead with this bill today, I’m concerned that my colleagues are more interested in making headlines instead of headway,” said Texas Rep. Kay Granger, the top Republican on the appropriations panel.

Democrats counter that they must move quickly to secure the Capitol, where a massive fence has surrounded the inner perimeter since the Jan. 6 attack. But they say that few other necessary security upgrades — such as stronger doors and windows or more cameras — can be made without more funding.

“We all sit in this chamber and we live with the violent assault on our democracy and our lives. We must act now to fulfill our obligations and our oath of office,” House Appropriations Chair Rosa DeLauro (D-Conn.) said ahead of the vote.

The bill also includes roughly $22 million to help protect members of Congress, who have seen personal threats against them more than double in the wake of the insurrection. Many, particularly Democrats and Republicans who have publicly clashed with former President Donald Trump, have paid out of pocket or with campaign funds to upgrade their personal security.

In addition, the legislation would offer back pay for Capitol Police and National Guard troops who have helped secure the Capitol and set aside millions of dollars for future security upgrades. It would also bolster and rename the Capitol Police’s wellness center for the late officer Howard Liebengood, who died by suicide in the days after the attack.

In response to lawmakers’ criticism of the fencing around the Capitol, the legislation bars the use of its security funding for any permanent barrier, though it allows the creation of retractable fencing in the future.

Architect of the Capitol Brett Blanton said in Wednesday written testimony before the House Administration Committee that his office would be issuing “initial recommendations in the coming weeks” from their assessment of the Capitol Complex’s needs. That assessment would include an evaluation of “physical security” needs like fencing.