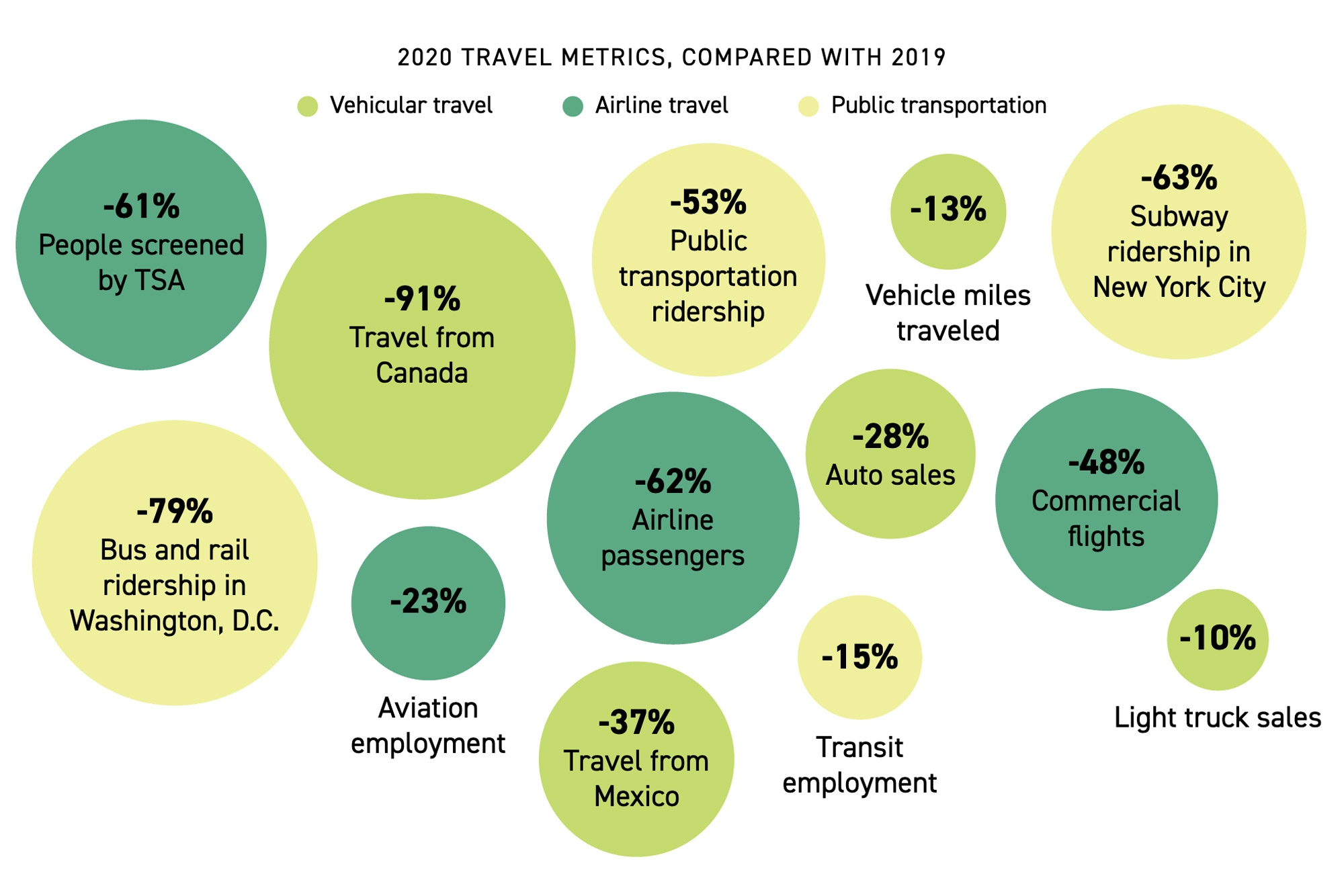 When the Covid-19 pandemic struck in spring 2020, Americans largely stopped commuting, swapped restaurant meals and bar crawls for walks or hikes, and started shopping for groceries and nearly everything else online.

One of the most severely affected parts of the economy was passenger travel. Public transit ridership, in particular, saw a steep downturn in March and April of 2020, according to the Department of Transportation. Major transit agencies like New York City’s MTA and Washington, D.C.’s WMATA recorded substantially low ridership, with decreases of 63 percent and 79 percent, respectively, in 2020.

The pandemic also took a big bite out of air travel. The number of commercial flights was nearly halved from what it was in 2019, and the Transportation Security Administration screened 61 percent fewer air passengers.

Overall vehicle miles also fell, but not by as much — just 13 percent. But travel across both the northern and southern borders of the U.S. was largely halted: 20 million passenger vehicles from Canada crossed into the U.S. in 2019, compared with fewer than 2 million last year — a 91 percent drop. Vehicular travel from Mexico dipped 37 percent.

In 2019, airlines served over a billion passengers. In 2020, that number was 398 million. According to the DOT, domestic travel dropped 59 percent and international travel was down 70 percent. U.S. carriers lost upwards of $35 billion in the pandemic, according to analyst estimates. And experts say business travel, which has been essential to airlines’ bottom lines, may never return to what it was before the pandemic struck.

As Americans shifted to learning and working from home full-time, a high-speed internet connection became more vital than ever before. Notably, the demand for upstream capacity — the bandwidth needed to send documents or participate in video conferencing — was much higher as a result. NCTA, a trade association for internet providers, noted that during the week of Feb. 13, 2021, there was a 57.9 percent increase in upstream traffic from before the pandemic — the highest recorded surge to date.

Volume of package deliveries by the U.S. Postal Service

When picking up groceries and buying toiletries was complicated with the heightened exposure to Covid-19, Americans turned to online shopping. The U.S. Postal Service reported that its competitive product volume — mainly package deliveries — was 31.6 percent higher in 2020 compared to 2019. And in December, the agency processed an all-time high of 812 million packages.

E-commerce demand rose for other package carriers — like Amazon, FedEx and UPS — too. Online grocery order demand became so great that Amazon had to stop accepting new Whole Foods delivery customers during the pandemic. And according to Frederick W. Smith, chair and CEO of FedEx, the company has been hiring about 4,000 new drivers a week to keep up.

Thousands of child care providers closed their doors during the pandemic. At the end of last year, one in four facilities remained closed. The collapse of the child care industry affected the labor market, with more than 10 percent of parents, primarily women, forced to leave their jobs to take care of their children. Although some facilities have reopened in the new year, many are operating on thin margins and decreased, unstable enrollment.

The Center for American Progress, a liberal think tank, found that the cost of center-based child care — as opposed to family child care — jumped by 44 percent. Prices were bumped up the most in Georgia and Louisiana, with 115 percent and 111 percent increases, respectively. CAP found that the increased costs were driven in part by the new health and safety protections for both children and staff.

The higher demand for child care, along with higher costs, has prompted a national debate over whether child care should be considered infrastructure. Democrats describe it as a system that’s critical for economic growth since without it, millions of workers can’t do their jobs, but Republicans have widely rejected the idea. President Joe Biden’s latest infrastructure package would funnel more than $25 million into upgrading and building out child care facilities.