Members of George Floyd’s family pressed President Joe Biden and Vice President Kamala Harris for meaningful police reform legislation in what they described as a “productive conversation” with the president on Tuesday.

The meeting between Biden and relatives of Floyd — who was murdered by a Minneapolis police officer one year ago — comes as Congress missed the president’s May 25 deadline for passing a bill that would overhaul policing in the country.

“[Biden] wanted to check on them, on today of all days to see how they were doing. To reiterate that they are still doing everything to make sure that his legacy is respected,” Ben Crump, an attorney for Floyd’s family, told reporters outside the White House after the meeting.

Biden told the family that “he doesn’t want to sign a bill that doesn’t have substance and meaning,” Crump said. “He is going to be patient to make sure it’s the right bill, not a rushed bill.”

Standing outside the White House after the meeting, Floyd’s 7-year-old daughter, Gianna, held up her fist with the rest of the family and said, “Say his name,” as the family chanted “George Floyd.”

Biden told the family he was “not happy” about the deadline not being met, said Brandon Williams, Floyd’s nephew. But ultimately he wants a bill that “holds George’s legacy intact.”

Biden later told reporters that he had “spoken with negotiators, and I’m hopeful that sometime after Memorial Day we’ll have an agreement on the George Floyd legislation.”

They were “talking about how they’re making progress, how both sides of the aisle are at the table, and they’re trying to define specific terms, because they feel that they are close, the closest they’ve ever been,” he said.

Scott told reporters the family was “receptive” to his proposal to shift liability from police officers to departments — a potential compromise on the question of qualified immunity.

Congressional negotiators blew past the May 25 deadline set by Biden during his address to a joint session of Congress last month. Rep. Karen Bass (D-Calif.), who has been part of bipartisan negotiations with Scott and Sen. Cory Booker (D-N.J.), was among the first to float the deadline, even as congressional leaders declined to commit to it. But now, she said, the final product of negotiations was more important than the date the bill was done.

“What is important is that when it reaches President Biden’s desk that it’s a substantive piece of legislation, and that is far more important than a specific date,” Bass said. “We will work until we get the job done. It will be passed in a bipartisan manner.”

She told POLITICO following the meeting with Floyd’s family on Tuesday that her group of negotiators had no other plans to meet this week, though that could change. With the Senate leaving for recess after this week, negotiations are likely to be pushed further into June.

Rep. Steven Horsford (D-Nev.), who was at the meeting between Floyd’s relatives and House Speaker Nancy Pelosi and Bass, told POLITICO it had been “very humbling” to meet with the Floyd family.

“To me, as a father — I have three kids, my daughter’s now 14, my sons are 18 and 20, and I can’t imagine the grief that (Gianna Floyd) and the family members continue to live with,” said Horsford, a member of both the House Problem Solvers and Congressional Black caucuses.

Tuesday marks the one-year anniversary of George Floyd’s murder by Minneapolis Police Officer Derek Chauvin, a killing that sparked nationwide protests, some of which turned violent, amid a broader reckoning with issues of racism and discriminatory policing. Chauvin was convicted in April of several felony charges — including murder — for pinning his knee against Floyd’s neck for several minutes. Three other officers who were at the scene also face charges for their role in the fatal encounter.

The anniversary of Floyd’s murder has shed fresh light on congressional efforts to craft a bipartisan police reform bill and the policy divisions that must be bridged for lawmakers to strike a compromise.

After the meeting, Biden released a statement about the family’s “profound loss” and called for action from Congress, saying he hopes lawmakers “will get a bill to my desk quickly.”

“Although it has been one year since their beloved brother and father was murdered, for the family — for any family experiencing a profound loss — the first year can still feel like they got the news a few seconds ago,” Biden said in the statement.

Harris’ statement after the meeting reflected a similar sense of urgency. “Mr. Floyd should be alive today,” the vice president said. “Congress must move swiftly.”

George Floyd’s brother Philonise said he was grateful for the opportunity to meet with the president and reiterated the family’s calls for action.

Congressional negotiations continue to drag on as Democrats and Republicans struggle to reach a compromise on key police accountability measures in the bill. Most Democrats are aggressively pushing for the final piece of legislation to eliminate qualified immunity, a judicial doctrine that shields police officers from being sued by victims and their families over alleged civil rights violations. Scott, the South Carolina senator, has proposed another option that would allow people to sue police departments rather than officers.

House Majority Whip Jim Clyburn (D-S.C.), the highest-ranking Black lawmaker, said earlier this month that he could be willing to forgo an end to qualified immunity for law enforcement in order to secure broader police reforms. Though Clyburn has since pressed for some kind of reform of the doctrine, House progressives, whose support is critical in their narrowly divided chamber, wrote in a letter this week to congressional leadership that ending qualified immunity is a priority, stopping just short of a threat to withhold their votes if it remains untouched.

The White House has taken a largely deferential approach to negotiations, saying it wants to give lawmakers room to find a compromise. Though White House staff are in frequent communication with negotiators, the administration has not set another deadline, nor has it mounted an aggressive pressure campaign for the bill. Civil rights advocates are OK with Biden’s approach, concerned that too much involvement from the administration could turn off Republicans.

Before he and the Floyd family left the White House on Tuesday, Crump recalled the long history of violence against Black people in the U.S., including the murder of Jimmie Lee Jackson by an Alabama state trooper in 1965.

“We remember Jimmie Lee Jackson being killed in Alabama and Martin Luther King and John Lewis in Selma using that as the impetus to get the Civil Rights Act finally passed after years and years of trying,” Crump said. “We pray that history can repeat itself and that the death of George Floyd will help propel us to finally get meaningful police reform.”

“Their blood is on this legislation,” he said. “We have to look at this as a national issue that we have avoided dealing with far too long.” 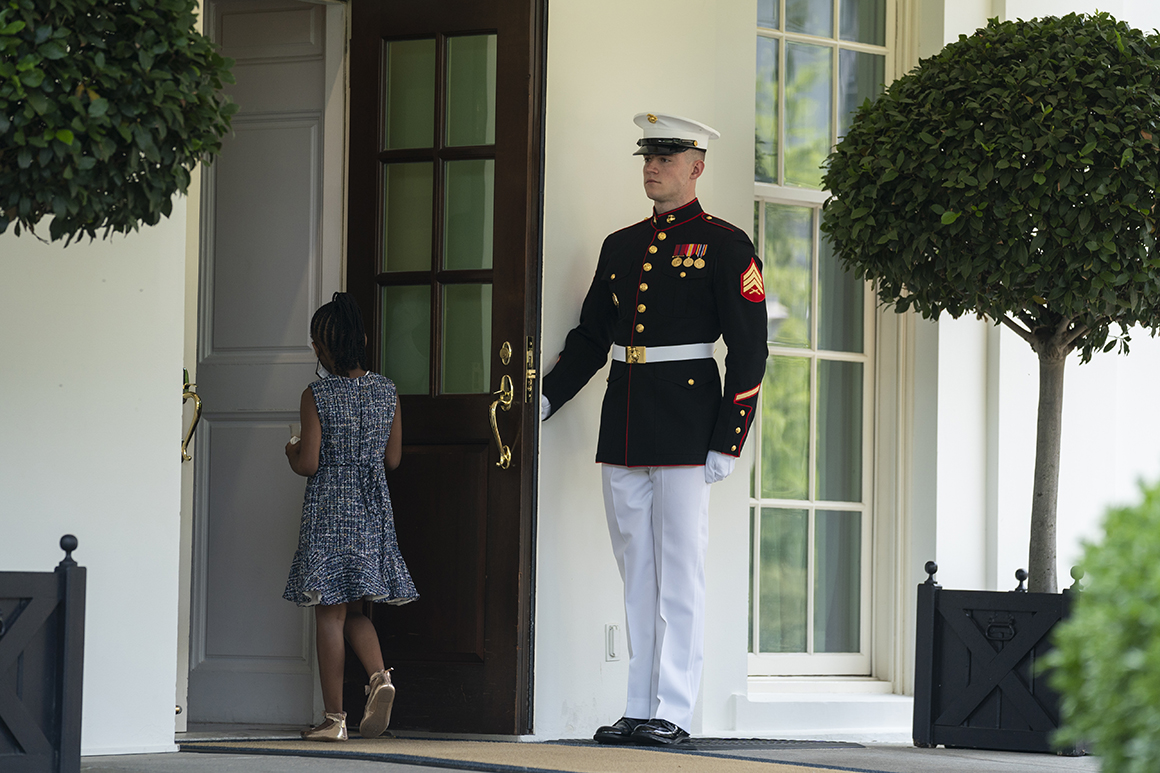