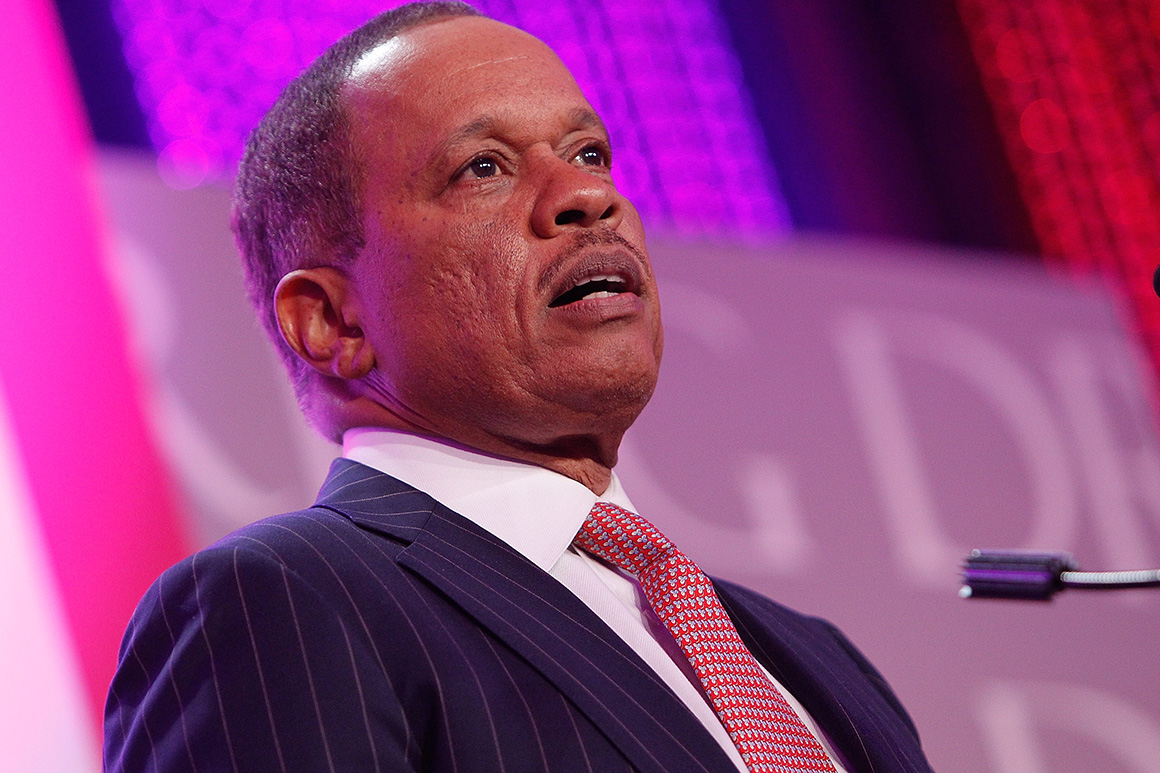 Juan Williams is headed for a gentler life. As the lone liberal co-host of Fox News Channel’s roundtable show “The Five,” he took the heat on live TV on a near-daily basis for years— sometimes mocked condescendingly, sometimes hollered at ferociously, always completely outnumbered.

On Wednesday, Williams, who lives in Washington, D.C., announced that he was stepping down from the job, days before fully-in-person production resumes in the New York studio. A year of largely calling in to the show remotely, plus a personal bout with Covid-19, had depleted his appetite for a weekly commute to New York, he explained. (He will remain with Fox as a senior political analyst.) Other reporting puts it less politely, saying the drive to bring “The Five” back to the studio—which would likely have forced Williams out of the show—was fueled by animosity between Williams and one of his co-hosts.

Either way, Williams’ absence leaves Fox with a very specific hole to fill: the “designated liberal” on a fiery conservative panel. Fox knows that a figure like Williams is central to the show. And if anything, his exit lays bare how important that liberal role is—and why Williams was particularly good at what might be the hardest, least appreciated and most important job in cable news.

I spoke to Williams by phone in March 2020, a few days into the coronavirus lockdown, when he and his colleagues had just been sent home from the studio to ride out a pandemic of unknown length. I had been following the success of “The Five,” one of Fox News’ consistent ratings hits, and wanted to know what it was like to be the show’s only liberal voice. Williams recalled the day, years earlier, when he was summoned to a conversation with then-Fox mastermind Roger Ailes, who described an idea he’d been developing for the hard-to-crack 5 p.m. timeslot. It was inspired, Ailes told Williams, by a stretch of his career in the early 1970s when he had produced a pair of Broadway shows. He wanted to cast a show with five stock characters, among them a “leading man” type with a strong conservative voice; a beautiful woman; and what Ailes described as a “Falstaff-type” figure who would serve as the contrarian. Unlike traditional news panels, where different voices competed in a free-for-all to make brief political points, “this was more like … a conversation among family,” Williams told me, “and the idea was, I guess, that you would become taken with these characters.”

Fox was hardly the first channel to discover that political conflict can be addictive viewing. The public television roundtable “The McLaughlin Group,” which fed off disagreement, debuted in the 1980s; CNN’s “Crossfire” was so intent on provoking division that Jon Stewart famously claimed the show was “hurting America.” Most of the energy on ABC’s popular “The View” rests with the “Hot Topics” segment, where five mostly-liberal women rehash current events with one designated conservative—a slot currently occupied by Meghan McCain—and tensions often run high.

Even among those shows, “The Five” stands out for a rigid structure, an underlying sense of humor and a calculated mix of serious topics and lighthearted fluff. Corny jokes, animal clips, talk of the hosts’ personal lives, and rapid shifts in subject matter have the effect of bringing down the temperature. (“Our producers are really good at what they do, and so they don’t do a show where we’re going to be yelling at each other for 60 minutes,” co-host Dana Perino told me in an interview last year.) Especially over the past five years, when political divides truly rent apart some families, the show became a proxy for a scenario that many of us were trying to avoid: sitting at a dinner table with warring relatives, having it out in an uncomfortable shouting match in which someone decided to throw food across the table, and then wiping the potatoes and gravy off the wall and returning to the table the next night.

Williams, who had been a rotating panelist, took over the show’s liberal slot full-time in 2017, after Bob Beckel, an original co-host, was fired by the network for a racist comment he made off-air. And Williams understood that being a principal player in a mashed-potato fight requires a certain brand of equanimity, and also a strategy. To prepare for the show every day, he told me, he familiarized himself with the right-wing press, from Drudge to Breitbart to the National Review, “just to know where those voices are, because it will give me a strong clue as to where the conservatives on ‘The Five’ are gonna be coming from.” And he tried to be deliberate about how he made his points when his turn came. A contrarian statement “acts as an accelerant, so it gets the debate energized,” he told me. But “it can’t be something that’s dismissed out of hand or put aside … You don’t want to stop the conversation. You want to feed the conversation.”

Williams’ comments were treated with anything from gentle tolerance to outright disdain, and periodically, the flare-ups got so loud that they made news themselves. In February 2019, co-host Greg Gutfeld shrieked at Williams for saying he and co-host Jesse Watters were “in the bunker” for Trump; in September 2019, Gutfeld exploded after Williams accused him of peddling GOP talking points. This past March, Tucker Carlson, filling in as a panelist, openly mocked Williams during a rant about the GOP and the deficit; Williams behaved as he often did in such situations, continuing to talk until he had finished his point, even as Carlson shouted over him. In general, Williams claimed a Zen-like approach to a scenario that would leave plenty of people curled up in a ball. “We do this every day,” he told me. “Sometimes things that are said are like, they sting, and other times, they cut…Most of the time it doesn’t hang in the air so that there’s hardly even any comment about it in the break. But if I get, as I said, cut, I’ll say, “You know, I didn’t like that. What are you talking about?’”

Ultimately, Williams and his producers understood that the alternate—no conflict—makes for terrible TV. During the 2020 presidential race, the Trump campaign streamed an explicit knock-off of “The View,” called “The Right View,” featuring women from the Trump orbit: Lara Trump, Mercedes Schlapp, Katrina Pierson, and Kimberly Guilfoyle, who had once been a conservative panelist on “The Five.” It was an hourlong, on-message conversation among four people who agreed with each other completely, and it was intensely boring. “The Five” was more fun, and the ratings reflected it; in 2020, the show ranked third in total viewers among all cable news shows, and was the only non-primetime show to crack the top five. This past April, it drew more total viewers than “The View,” the third hour of “Today,” and NBA Saturday basketball.

But just as no one realizes how hard it is to be the straight man in a comedy, many viewers undervalue, or at least misunderstand, the purpose of a lone dissenter. Perino told me about a viewer who flagged her down at a book signing in Colorado, and asked, “Can we do anything about Juan?” (Perino suggested praying for Williams; the woman concurred.)

Even like-minded liberals haven’t always appreciated Williams’ role. Early in his tenure as a guest-host on “The Five,” Williams told me, he learned that some people in the Obama administration didn’t want him to go on a network that was so consistently opposed to the president. (“I’m like, ‘Do you watch? Do you see what I’m doing over there?’” Williams recalled.) But one top Obama official—Williams wouldn’t tell me who—quietly told him that he might be “the strongest liberal voice in America.” After all, he was the only liberal voice some loyal Fox viewers would consistently hear.

Williams embraced that role, though he said his goal generally wasn’t to win an argument or shut his fellow panelists down. “It’s not ‘I’m trying to get you to agree with me,’” Williams said. “It’s ‘I’m trying to get you to be open to me so you hear me.’” And some viewers of “The Five” clearly appreciated the exposure. “That is a sad loss,” one person tweeted on Wednesday, about the news that Williams was leaving the show. “I usually disagree with him. But he makes me want to listen and occasionally changes my mind.” Maybe there’s hope for those family dinner conversations, after all.