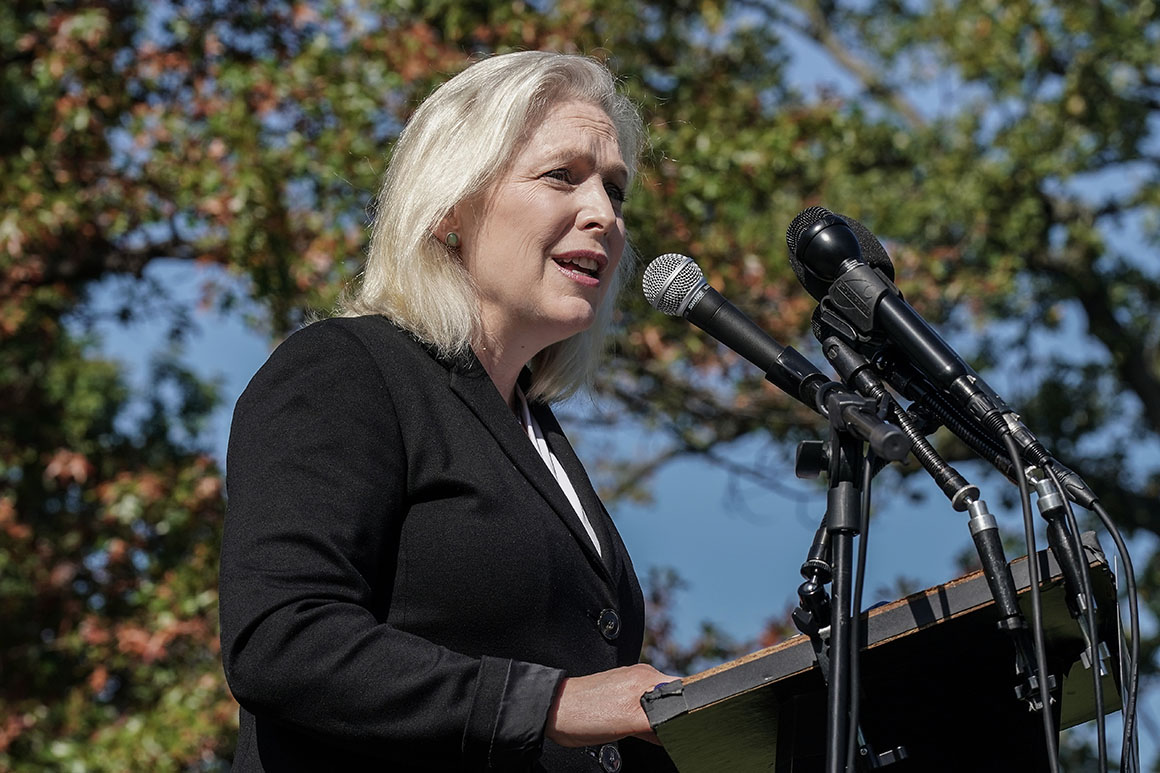 Kirsten Gillibrand surveyed the whiteboard that leans against her office wall, ticking through the list of senators she hopes to win over for her landmark plan to wrest control of military sexual assault investigations from commanders.

“Sullivan, I’ve been working nonstop. I think he’s going to vote yes. And if he does vote yes, he might even co-sponsor,” Gillibrand said, updating her latest whip count with a marker. “We might get Rubio. I’ve been working him for eight straight years.”

In national politics, her name is often associated with the ouster of former Sen. Al Franken (D-Minn.), though Gillibrand was only the first — by minutes — of dozens of senators who pushed him to go amid multiple misconduct allegations. Then her presidential campaign sputtered after just five months.

But the New York Democrat is now on the cusp of a breakout year that has the potential to rewrite her legacy, putting 2020 and Franken well behind her.

A boundless optimist and ultra-composed by nature, Gillibrand won Sen. Joni Ernst (R-Iowa) as her ally this spring after years of working to overhaul military sex crime prosecutions. She now believes the duo can win 75 votes, a stunning turnaround for an effort that was repeatedly rejected by her colleagues. And Gillibrand’s yearslong push for federal paid family leave has helped the issue gain major traction within her party, giving it a real chance of inclusion in President Joe Biden’s next big spending bill.

Gillibrand said she feels more “energized” than ever to be a senator. But at some point she sees herself back on a bigger stage.

“I definitely want to run for president again,” Gillibrand said during an interview in her Capitol office, happily maskless after the Biden administration’s latest Covid guidance. “I learned so much on that campaign: about myself, about the country, about how to be successful as a politician. I became a much better speaker and became better at my job.”

Appointed to the Senate in 2009 after Hillary Clinton became secretary of State, Gillibrand has shifted along with the center of gravity in her party, maturing from pro-gun rights Blue Dog to outspoken progressive. While she’s winning the Senate’s yearslong game of legislating by almost any metric at the moment, she concedes that she did “not realize things take 10 years” when she first arrived.

Yet that’s exactly been her experience as a rank-and-file senator from New York, sharing her state with Senate Majority Leader Chuck Schumer. She worked with him for years to make a 9/11 first responders’ fund permanent, introduced national paid leave policies well before they picked up steam and is now laboring to care for military personnel suffering from exposure to toxic burn pits.

Gillibrand isn’t a committee chair nor is she a party leader, but she’s steadily built influence within the Democratic Party. She was among the first Senate Democrats to call for former President Donald Trump’s impeachment and one of the first to seriously entertain gutting the filibuster — both now widely popular positions in her 50-member caucus.

Her military sexual assault legislation, which would remove commanders’ authority over whether to prosecute serious crimes, could be included in the yearly defense policy bill. But she’s hoping for a separate floor vote from Schumer instead, arguing that would be more powerful than fighting it out in committee. Several senators said privately that they were borderline exhausted by the number of times Gillibrand contacted them for their support on the proposal.

Though Gillibrand has yet to win over Senate Armed Services Chair Jack Reed (D-R.I.), Schumer said he’ll do “everything I can to help get it done.”

“She picks very hard issues that seem difficult to solve. And she’s undaunted,” Schumer said of Gillibrand. “She spends a lot of time talking to members [on the Senate floor]: There are times she’ll spend a half-hour sitting and talking.”

Acting almost as her own whip, she’s asked supporters of her bill to fan out across the chamber and convince wavering senators to get on board. She hopes Tuberville can get Sen. Richard Shelby (R-Ala.) and that Sen. Shelley Moore Capito (R-W.Va.) may be able to convince Sen. Joe Manchin (D-W.Va.).

Gillibrand’s dogged effort, combined with the slow and painful passage of time, brought her several new votes, like Sen. Angus King (I-Maine) and Jon Tester (D-Mont.) that she lacked when the issue first came to the floor in 2014. Those senators realized nothing was improving without radical change.

But no one was more influential than Ernst.

The Iowa Republican and combat veteran joined the Senate in 2015 and repeatedly turned Gillibrand down; Ernst said she didn’t “want to completely shut out the chain of command.” Yet over the years the two became exceedingly close friends — sharing meals, biker barre classes and Bible study, as well as playing softball.

After all that time spent together, Ernst and Gillibrand compromised on the reform of sex-crimes accountability: Commanders would be notified of investigations. And Ernst would sign on and bring enough senators to put Gillibrand over the top of the Senate’s 60-vote threshold.

When Gillibrand does talk politics, she’s often asked to respond to the alleged inappropriate behavior of powerful men. Her link to Franken’s ouster has endured and led to a barrage of inquiries when New York Gov. Andrew Cuomo faced questions about his own conduct.

It’s a reputation she doesn’t exactly relish, though she says that public officials should be expected to answer these questions. She also doesn’t criticize the handful of Democratic senators who have expressed remorse about calling for Franken to go in 2017.

She says members of her caucus have “fond” memories of Franken and it’s understandable that they miss the former comedian and Trump antagonist. But she has no regrets: “All the decisions made by Senator Franken are his and his alone. And if he regrets resigning, that was his decision.”

What she doesn’t like is when the burden of policing sexual harassment falls disproportionately on women senators. She said it’s “not fair” for women politicians to carry the weight of evaluating sexual assault charges.

“That’s why I think people associate me only with these things where it’s like, there were 30 senators that had the same opinion [about Franken] at the same time, some at the same minute,” she said. “That’s the thing that’s a bit strange about how people remember facts.”

After this year, what they may remember instead is Gillibrand breaking through. Gillibrand isn’t so sure. Nor, she says, does she care.

“I value the work I do. I know my value in the Senate. I have a commitment to helping people,” she said. “And if the media doesn’t see that, it’s okay.”