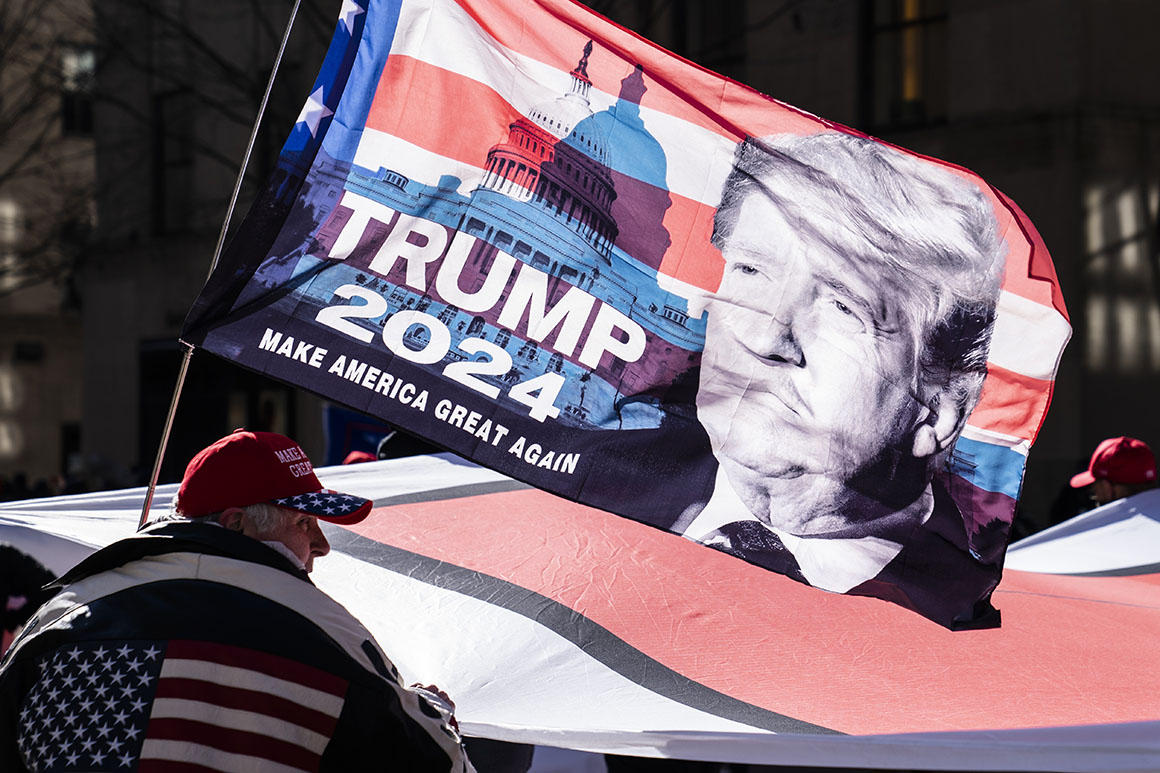 Republicans largely oppose forming a commission to examine the Jan. 6 Capitol attack, hoping to block out further Donald Trump-induced chaos while they try to retake Congress next year.

The former president is making clear he isn’t going anywhere.

Trump is confiding in allies that he intends to run again in 2024 with one contingency: that he still has a good bill of health, according to two sources close to the former president. That means Trump is going to hang over the Republican Party despite its attempts to rebrand during his exile and its blockade of a Trump-centric investigation into January’s insurrection.

And amid news that the Manhattan district attorney has convened a grand jury that could decide to indict Trump, other executives working for him or the business itself, Trump publicly signaled this week that he’s considering another run. But he may face skepticism from surprising corners of the GOP, as some Republicans who supported him consistently during his presidency have mixed opinions about the possibility of a Trump 2024 campaign, according to interviews with 20 Republicans in both the House and Senate.

“President Trump did a lot of good. But he squandered a lot of his legacy after what happened after Nov. 3. And I think that’s a shame,” said Sen. John Cornyn (R-Texas), who was the GOP whip for Trump’s first two years in office. “Running for president, you’re under a lot of scrutiny. And all I can say is there’s a lot to talk about.”

Even without a Twitter presence, the former president still dominates the Republican water cooler. He’s working to oust those who backed his impeachment, namely Rep. Liz Cheney (R-Wyo.) and Sen. Lisa Murkowski (R-Alaska), as well as boost his preferred candidates in battleground Senate primaries.

Sen. Lindsey Graham (R-S.C.), the middleman between Trump and the Hill GOP these days, said that the ex-president’s plans to devise a still-nascent “America First” messaging drive will put Trump “in charge of the policy agenda.” And Trump’s future, his semi-regular golfing partner suggested, might hinge on how his party handles the next 18 months.

Multiple Republicans, however, say Trump’s appeal can be replicated by someone without the baggage of two impeachments, a Capitol riot he stoked, groundless challenges to his election loss and a barrage of inflammatory statements. Those GOP lawmakers believe their party is more competitive than it was five years ago but that Trump himself may no longer be the best standard-bearer.

Of course, most of them would sooner retire than attach their names to that opinion. As one publicly Trump-praising Republican lawmaker put it: “I’d like to see a fresh face. I think we have a lot of them.”

“He’s one of the best presidents we’ve had in terms of policies. But having said that, if it were up to me, I would never have Trump on any ballot ever again because it’s such a distraction,” said another House GOP member, who also insisted on anonymity to speak candidly. “I would love for him to play a behind-the-scenes role and not be on the ballot.”

There’s no shortage of possibilities who could carry a Trumpian mantle to the nomination in 2024: In the Senate, there are Floridians Marco Rubio and Rick Scott, Texan Ted Cruz, Missouri’s Josh Hawley or South Carolina’s Tim Scott. GOP governors from Ron DeSantis in Florida to Kristi Noem in South Dakota are also on everyone’s radar. Then there’s former Trump Secretary of State Mike Pompeo, former U.N. Ambassador Nikki Haley or even Trump’s embattled House acolyte, Rep. Matt Gaetz of Florida.

Of course, some conservatives argue that if 2024 candidates are going to just replicate his platform, why not go with the man himself? Rep. Jim Jordan (R-Ohio), one of Trump’s fiercest allies, said: “I’m for Trump, period. I don’t care who else is running.”

“Why have a carbon copy?” said Rep. Brian Mast (R-Fla.). “Why would we not support the original?”

But some congressional Republicans fear a Trump comeback will freeze the GOP field and potentially deter other potential 2024 candidates from laying the proper groundwork to challenge President Joe Biden, if he fulfills his vow to run again. This means that most eager GOP hopefuls must wait to see what the former president decides, particularly those who have grown their national profiles in Trump’s political shadow.

Pompeo is expected to run in 2024 if Trump forgoes a run or 2028 if Trump jumps in, according to multiple GOP sources who say his intentions seem clear. He and others could be waiting years before Trump gives a definitive answer. But none of the former president’s potential successors are publicly questioning his timeline.

Hawley said that if Trump runs, “I don’t think there’s anybody else who would be able to capture the party.” Cruz dined with Trump earlier this month and said that when Trump makes his decision, “everyone else will respond accordingly.”

“Folks in Washington, both politicians and the press, that are trying to silence or erase President Trump are not going to succeed. And he’ll make his own decision on his own time frame,” Cruz added.

While Republicans are divided on whether another Trump campaign is the solution to 2024, they’re more aligned on stopping a months-long investigation from probing his actions on Jan. 6 and before the riot. Republicans foresee a disaster in the proposed commission: All the drama of answering questions about Trump with absolutely no upside. Of course, Democrats and some Republicans argue that an independent inquiry is just the right thing to do.

Senate Minority Leader Mitch McConnell privately told his Republican colleagues in a meeting this week that such a probe would hurt their messaging heading into the midterms. Both McConnell and House Minority Leader Kevin McCarthy (R-Calif.) are gearing up for fights to win back control of their respective chambers and want to focus on opposition to Biden’s agenda — not Trump-fueled news cycles that still haunt Capitol Hill Republicans who survived his presidency.

“That’s one of the main objections that has been spoken of: That the Democrats would use this [commission] as a way to try and keep the Jan. 6 issue front and center as long as possible and affect the 2022 election,” said Sen. Mitt Romney (R-Utah), who voted to convict Trump in two separate impeachment trials and who supports a commission.

He said as his colleagues consider Thursday’s vote, they are looking at their constituents and asking themselves: “How do I align with them and represent them? It’s very clear that within our party that President Trump is very much admired.”

In a Tuesday statement, Trump called the news of a grand jury probe into his business practices “an affront to the almost 75 million voters” who supported him in the last election cycle.

“Interesting that today a poll came out indicating I’m far in the lead for the Republican Presidential Primary and the General Election in 2024,” Trump wrote.

Sen. Kevin Cramer (R-N.D.), a longtime Trump backer, said that even if Trump’s legal troubles intensified, that might not hurt him with Republicans: “Some people might consider him a folk hero.”

Of course, with all of his posturing toward another run, Trump may be feinting. Floating his name as a presidential contender keeps him relevant and in the news, while also making his allies eager as ever to kiss his ring in Mar-a-Lago.

The Republicans who are hoping their mercurial figurehead won’t drag out his decision until the last second — and risk kneecapping other candidates — argue that what’s best for Trump may not be best for the GOP as a whole.

“I would be among the voices trying to tell him to let us know as soon as he can,” said a third House Republican.