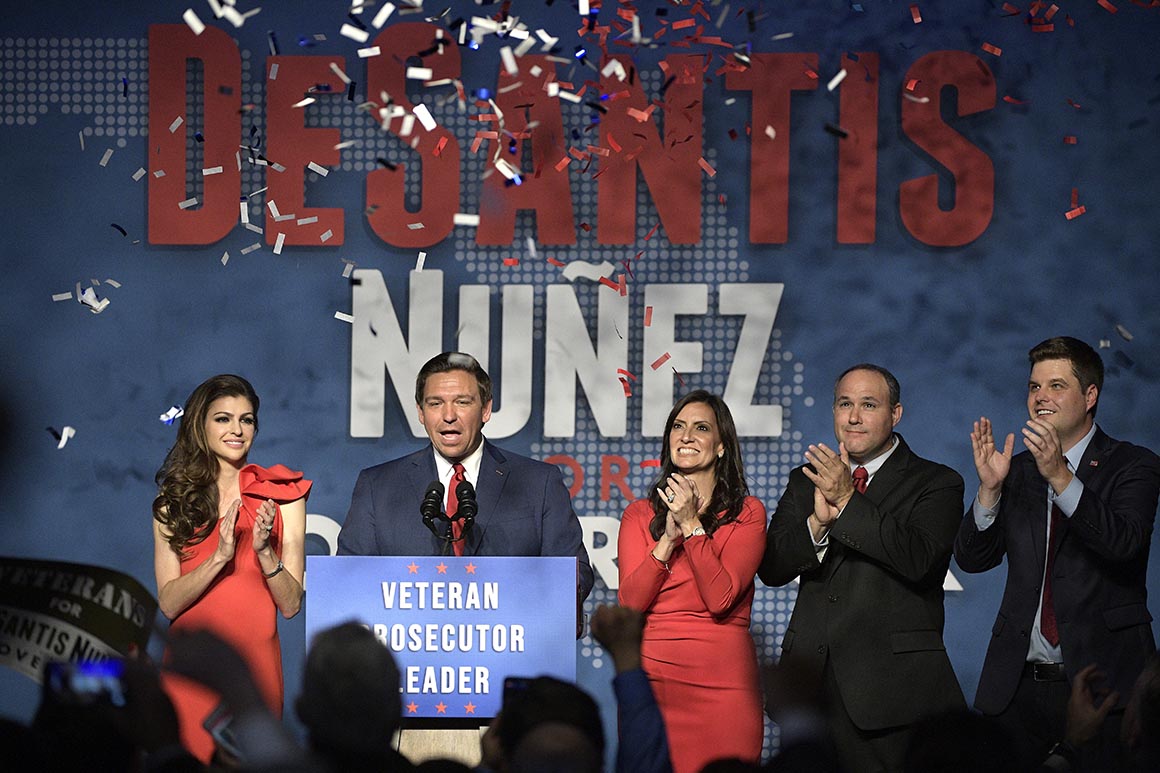 The trio were there to convince the GOP-led Florida Legislature to lift a state ban on smokable medical marijuana, a surprising move for a conservative governor. Yet, it was even more unusual for the Republican governor to stand with a key financial booster for the left.

The scene underscored how close a relationship Gaetz, a supporter of the cannabis industry, had built with the new governor.

“It was all initiated by Matt,” Morgan said in an interview. “Matt had to assure Ron that I would behave. Ron trusted Matt. I behaved.”

DeSantis standing shoulder-to-shoulder with a Democratic donor in one of his first public events as governor also caught early DeSantis administration staff by surprise.

“The… press conference with John f—ing Morgan? Yeah, that was all Matt,” said a staffer who worked for DeSantis at the time and spoke on condition of anonymity to freely discuss his former boss.

Before federal investigators were looking into Gaetz in an ongoing sex scandal, he was a top campaign adviser to DeSantis, who he met while both served in Congress. DeSantis at the time was a little-known GOP congressman in 2018 and needed help navigating Florida’s political landscape as he weighed whether to run for governor. Gaetz, 39, had deep connections to Florida’s political class because of his father, Don Gaetz, a powerful former state senator. Gaetz went on to play roles in DeSantis’ campaign and his early administration.

DeSantis’ ties to Gaetz could pressure the governor to answer difficult questions about whether he was aware of any alleged wrongdoing as he seeks a second term as governor and possibly the White House. As an adviser, Gaetz urged the governor to appoint several people who are also now ensnared in the federal investigation. Gaetz was also close friends with Joel Greenberg, the man at the center of a federal investigation into sex trafficking.

In interviews, more than half a dozen former DeSantis campaign advisers and early administration staffers say Gaetz had huge influence over DeSantis, who in the run-up to his gubernatorial campaign was an outsider in state-level Florida politics. That was a world where Gaetz had long been an operator. Now, as DeSantis runs for reelection and is likely laying the groundwork for a 2024 presidential run, he has all-but turned his back on Gaetz.

The eight former campaign advisers and staffers spoke only on condition of anonymity to discuss DeSantis.

No charges have been filed against Gaetz, who has denied any wrongdoing. But the three-term congressman’s legal troubles appear to be increasing after Greenberg pleaded guilty to multiple federal crimes, including sex trafficking a 17-year-old. Greenberg has also agreed to cooperate with federal authorities as part of his plea.

DeSantis’ spokespeople did not respond to a request for comment, and the governor has so far refused to comment about Gaetz. The 42-year-old governor previously told reporters that “I don’t have anything to say about that,” when asked about the Gaetz probe.

Gaetz also declined to comment for this story. But during a recent May 7 event at the Villages with Rep. Marjorie Taylor Greene (R-Ga.), he touted his relationship with DeSantis, saying he remembered “campaigning with Ron DeSantis when we could fit the whole campaign in an elevator and still have room for social distancing.”

One former campaign adviser said Gaetz was on every conference call with advance teams “and generally was often just a key voice in directing the campaign what to do.”

“Man, I can’t tell you how much by the end of the election he was the campaign,” said another former DeSantis adviser who worked on the race. “By the time we were in heavy general election mode, DeSantis was not doing anything without Gaetz being in on it.”

Gaetz once brought Greenberg, then the tax collector of Seminole County, to a campaign office for a visit, said a former campaign aide for the governor.

“I obviously knew who Matt was, but I was like ‘who the f— is this guy?’” said one former DeSantis aide, recalling the mid-morning visit to the campaign’s Orlando office. “It was the first time I saw him [Joel]. They were in like shorts and sunglasses, and just came in trying to give us advice and tell us what to do. It was very bizarre for like an hour or so.”

Among those Gaetz lobbied for was Jason Pirozzolo, an Orlando-area surgeon and longtime GOP fundraiser, according to multiple previous news reports. Gaetz pushed the DeSantis administration to appoint Pirozzolo to be Florida surgeon general, a position overseeing the state Department of Health.

“Gaetz stood on his head to make Jason surgeon general,” said one DeSantis transition official. “He got a meeting. The governor didn’t appoint him, but no way he’s even in the room without Matt.”

Gaetz eventually convinced DeSantis to appoint Pirozzolo and others to the seven-member board that runs the Orlando International Airport in 2018, a perch from which they could control a $4 billion budget. Pirozzolo had previously served on the board beginning in 2010 under the administration of then-Gov. Charlie Crist. Gaetz even once told Fox News that he was speaking to DeSantis one night about Orlando International Airport appointments instead of then-President Donald Trump.

Pirozzolo is linked to the federal investigation into Greenberg. Pirozzolo’s private plane was one of two used during a trip to the Bahamas in Sept. 2018 that included Gaetz and five women, including one who allegedly was 17 years old at the time, sources had previously told POLITICO. The second plane used as part of the Bahamas trip, which came during the heat of the 2018 general election, belonged to former state Rep. Halsey Beshears. Gaetz took part in the Bahamas trip but did not travel on Pirozzolo’s or Beshears’ private planes. Gaetz also pushed hard to get Beshears a post in the DeSantis administration.

Gaetz first wanted to install Beshears as head of the Department of Environmental Protection, but that fell through over concerns that Beshears was too cozy with the sugar industry, a foe of the governor, according to a former DeSantis staffer who worked on the administration’s transition. DeSantis agreed to make him head of the Department of Business and Professional Regulation, which is the state’s top regulatory arm. Beshears took the job but stepped down in January, citing health issues.

A group of DeSantis appointees, including Pirozzolo, were part of an effort to elbow existing board members out of the Orlando International Airport board. That effort included an amendment that Beshears was responsible for that would have pushed two Democrats — Orlando Mayor Buddy Dyer and Orange County Mayor Jerry Demings — off the board, the Orlando Sentinel first reported.

Gaetz eventually fell out of the governor’s direct orbit, a move hastened by DeSantis’ former chief of staff Shane Strum, who served as a notoriously aggressive gatekeeper to the governor.

“Here is a good way to look at it: As Shane’s power grew, Matt’s diminished,” said a current DeSantis adviser. “I don’t think it was a personality conflict, it was more of a power conflict.”