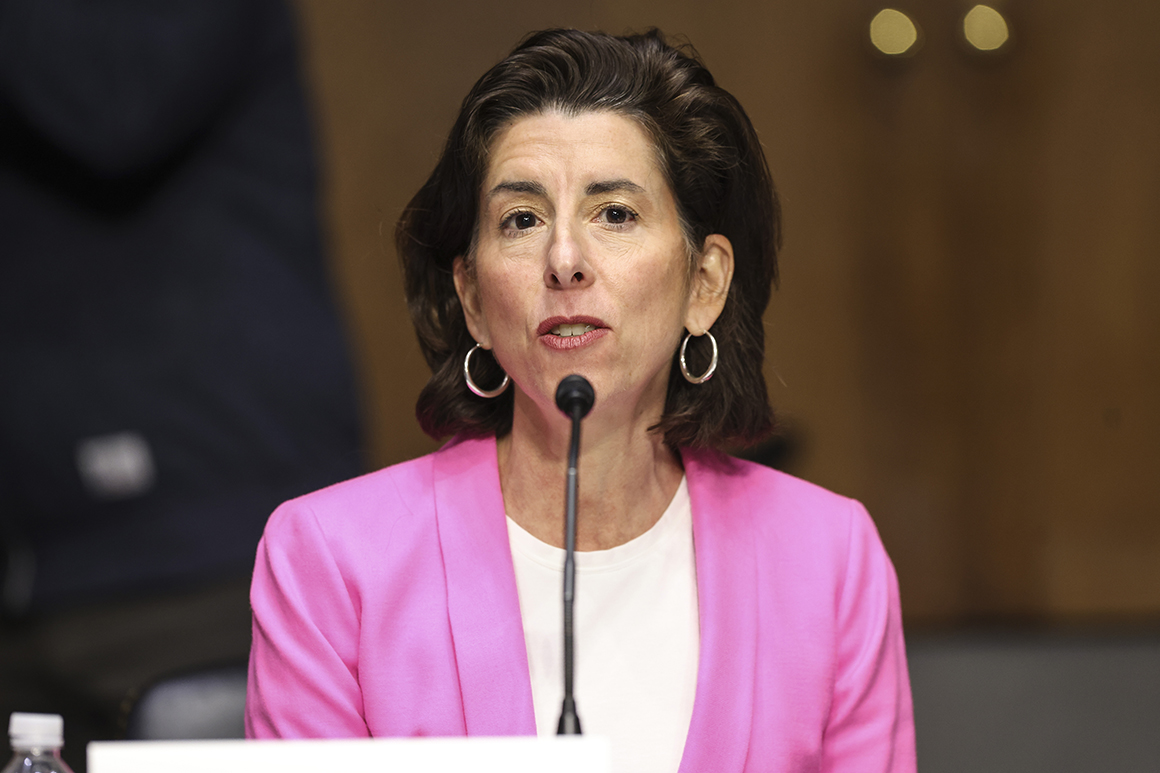 Washington’s pledge to pour tens of billions of taxpayer dollars into making more microchips in the U.S. is setting off behind-the-scenes squabbles among industries angling for a slice of the spoils.

Commerce Secretary Gina Raimondo on Thursday convened nearly three dozen executives from many of those sectors, including tech, autos and semiconductors, for a second high-level confab with the Biden administration in just over a month. So many companies wanted to participate they were split into two sessions.

“There’s a lack of transparency right now in the supply chain,” Raimondo told reporters afterward. “We are trying to figure out what role, if any, the government can and should play in increasing that information sharing and forecasting, so we can alleviate the short-term crunch.”

The Biden administration and Congress are under mounting pressure to relieve a global chip shortage that has idled manufacturing workers and raised prices for some consumer products, complicating the economic recovery. Key political constituencies are leaning hard on the government to act — forcing policymakers into the thorny position of picking winners and losers from across a vast swath of critical industries.

The issue has only grown more urgent as the chip shortage threatens to last through the rest of the year — or longer. But building new semiconductor plants is a yearslong undertaking, so some industries, especially automakers, have implored the U.S. to explore more immediate interventions.

Raimondo will host a separate roundtable on Friday with South Korean Trade Minister Moon Sung-wook and CEOs from both countries. “We want to explore ways that we can work with our allies, to coordinate our supply and demand needs,” Raimondo said.

Several lawmakers urged Biden months ago to invoke the Defense Production Act to direct companies to make chips for certain priority industries, though Raimondo said Thursday that the sheer number of industries in need would make that difficult. “We want to do everything we can but I think that’s a challenge,” she said.

So far, the Biden administration has positioned itself as something of a mediator between chipmakers and the industrial sectors facing a prolonged shortage. That includes a push to talk more openly about how quickly chips can be produced and steps to avoid excess orders and abrupt cancellations.

“We have been trying to bring the different parts of the sector together to get them talking more to each other to increase transparency,” Peter Harrell, the White House’s senior director for international economics and competitiveness, said this week at a Washington event.

“That may not solve the overall shortage but it at least enables better planning and minimizes business disruption,” he added.

Raimondo did not hint at any action the administration would take as a result of the roundtables, but said the discussions offered insight into semiconductor needs companies have today and where current supplies are going.

Administration officials readily acknowledge that none of the short-term options offers a surefire fix. And they could force policymakers to make politically fraught decisions about whether to prioritize products like automobiles or computers over defense equipment or medical devices.

Washington has put much of its attention to yearslong efforts to rebuild chip manufacturing domestically and wean U.S. dependence on foreign providers.

“There’s growing recognition among policymakers that — whether it’s the auto chip shortage, or competition with China, or the race for the technologies of the future — all roads lead to semiconductors, and I think it’s getting that level of prioritization among official Washington,” said David Isaacs, vice president of government affairs at the Semiconductor Industry Association.

The Senate is expected to vote as soon as next week on legislation, S. 1260 (117), that could funnel as much as $52 billion to ramp up U.S. chip production. But amendments that would assist specific industries, particularly the automotive sector, have recently complicated negotiations. The funding would also need to clear the House.

The auto industry has lobbied for a portion of government spending to be designated for fabrication facilities that specifically churn out chips that can be used in cars. Dealers’ lots are running out of vehicles, and the average price car shoppers paid last month was the second highest on record, according to estimates from J.D. Power.

“We do think it makes sense to ensure that at least a portion of the funding goes to an industry that builds a lot of products here in the United States,” said former Missouri Gov. Matt Blunt, who now represents the three largest U.S. automakers as president of the American Automotive Policy Council.

“The economic impact when you can’t build a car in the United States is certainly more substantial than the economic impact of not being able to produce a set of consumer electronics products probably built in Asia,” he said.

Raimondo said Thursday that the money that Congress is looking to designate for auto-grade chips would benefit other sectors, as well.

“If you talk to other industrial manufacturers or appliance makers, for example, they consume those kinds of chips,” she said. “So, yes, it’s vital to the auto industry, but it’s not really a ‘carve out’ for autos.”

The Information Technology Industry Council, which represents firms like Apple, Google, IBM and Dell, has opposed Congress setting aside money to build chips solely for the auto sector. It’s one of many trade groups closely monitoring how money from Washington will get doled out.

“There’s a risk of enormous unintended consequences from any single industry or vertical drawing too large of a specific allocation,” Tom Quillin, a senior policy director at semiconductor giant Intel, said at an event this week. “I think there are risks down that path.”

Other industries have pressed for relief to address their shortages as well. The Advanced Medical Technology Association, the largest medical device lobby, cautioned Raimondo against prioritizing other industries at the expense of health care equipment in a letter Wednesday. IPC, a group of electronics manufacturers, wrote in a letter Thursday that other electronic components like circuit boards deserve funding, too.

There’s no question that U.S. automakers have been acutely affected by the chip crunch, with Ford, General Motors and Stellantis, which owns the Chrysler brands, all halting some of their production and sidelining union workers — a contingent the Biden administration is eager to court.

Michigan’s Democratic Sens. Gary Peters and Debbie Stabenow authored and narrowly passed an amendment that would allocate $2 billion to the CHIPS for America Act, H.R. 6395 (116), to produce the kind of legacy chips most common in automobiles.

“We should not allow unnecessary or purely political provisions [to] weaken our strong support to our consensus commitment to deal with these vulnerable supply chains,” Cornyn said on the Senate floor Thursday, asserting that Democrats’ prevailing wage amendment is “jeopardizing this funding.” 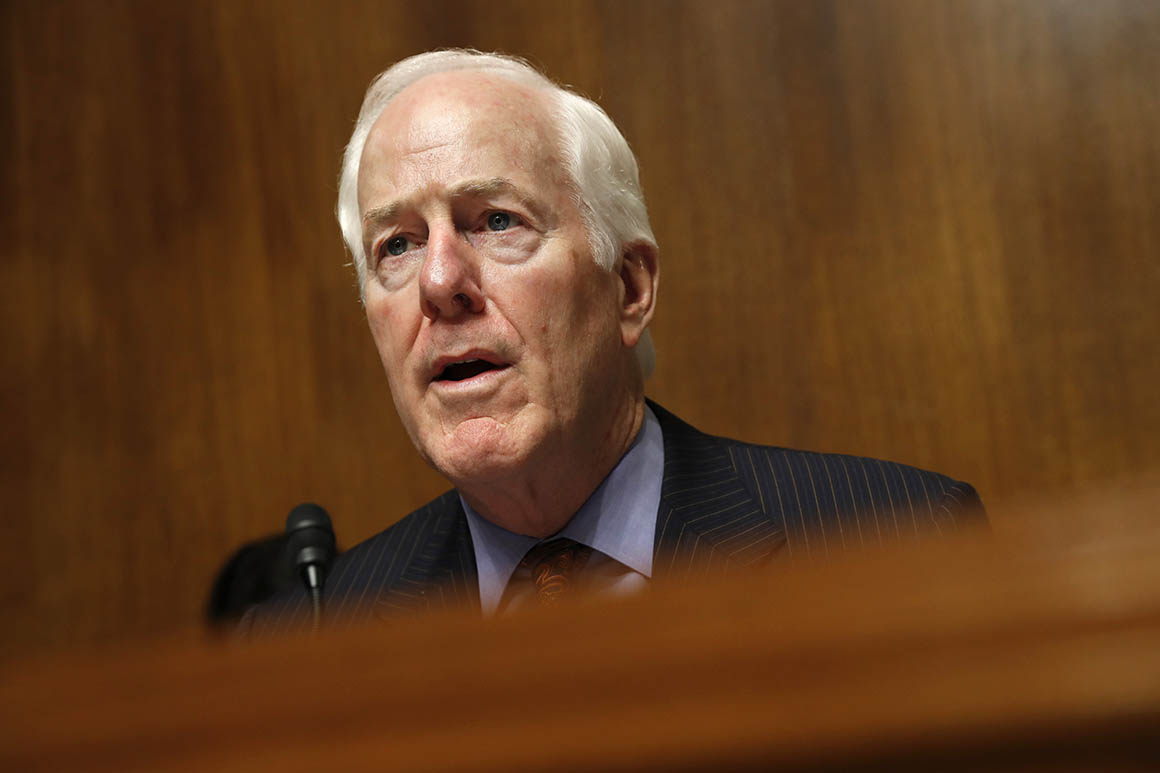 The coronavirus pandemic prompted consumers to start snapping up electronics for at-home school, work and entertainment, increasing demand among those companies for chips. At the same time, semiconductor industry officials say, automakers slashed their orders, expecting demand to plummet.

Semiconductors require a complex and time-consuming production process, so the fix isn’t as simple as starting to make more. Plus, the world’s leading manufacturers are already running near maximum capacity, though companies like Intel have pledged to start making auto chips later this year. And compounding the problem have been unexpected events like the prolonged power-grid failure in Texas after a cold snap in February, a factory fire in Japan in March, and a severe, ongoing drought in Taiwan that is crimping water supply needed for semiconductor plants.

The Commerce Department is in the middle of a 100-day review of the semiconductor supply chain, with a report due to the president next month. A senior administration official said the recommendations will include suggestions to “encourage production at home and surge capacity.”

“We acknowledge that in the short term there aren’t a ton of easy solutions to scale up capacity, so we have focused on working with companies and governments to do everything they can to increase their short-term capacity, realizing there are limits to their ability to do that,” Harrell from the White House said.

David Lim contributed to this article.