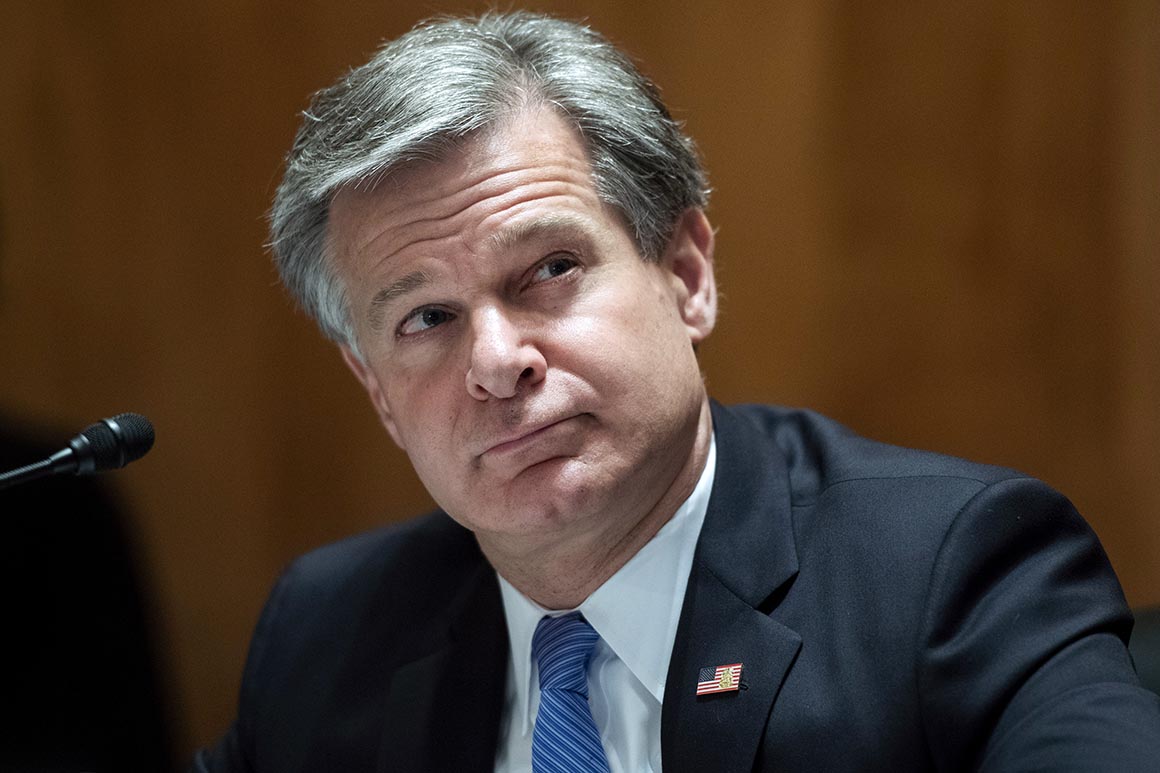 Under the plan, the former officials said, Kash Patel — a former aide to Rep. Devin Nunes (R-Calif.) and a fierce critic of the Russia probe — would have become the bureau’s deputy director.

Previously unreported details of the proposal reveal just how seriously the former president took his grievances against the intelligence and law enforcement establishment. It shows Trump at his mercurial peak, ordering up the removal of his own appointee in a fit of rage, only to back down when then-Attorney General Bill Barr threatened to resign if he followed through with the maneuver.

Trump’s ire at Wray was episodic, flaring up whenever the low-key FBI chief crossed his radar. Congressional testimony on Russia, always a sensitive subject, could provoke Trump’s anger. So could Wray’s pronouncements on election security or his defenses of the Foreign Intelligence Surveillance Act, a law the former president blamed for enabling Democrats’ supposed “spying” on his 2016 campaign. Trump also thought Wray was weak, according to one of the former Trump officials.

A former Trump White House official said Trump “had always flirted with the idea” of firing Wray. But back in April 2020, Trump’s zeal to oust Wray “was intense as it ever was and pretty constant then,” recalled another former senior Trump official. On this occasion, it’s unclear what exactly had sparked Trump’s anger. But at the time, the president had recently beaten back Democrats’ first effort to impeach him — and felt liberated, the officials said.

The problem with firing Wray, for a White House staffed with neophytes and riven with dissension, was just how to do it. Aides who were periodically tasked with engineering Wray’s dismissal had little idea how to pull off such a maneuver without creating massive political blowback, two former officials said. The Department of Justice, which oversees the FBI, had been rebuffing the White House’s demands to fire Wray, who was widely respected on Capitol Hill. And Trump, always easily distracted, rarely followed up his outbursts with action.

It all came to a head in late April, when Barr and an aide went over to the White House for a routine meeting in then-chief of staff Mark Meadows’ office.

Instead, a staffer from his office intercepted Barr and told him he was actually going to meet in the Roosevelt Room, where such meetings were not usually held.

Barr found it strange to be put in that room, especially given that no one else was there when they entered it. Soon afterward, John McEntee, the powerful head of the presidential personnel office and a hard-core Trump loyalist, entered. Then Evanina, the director of the National Counterintelligence and Security Center, also came into the room.

Barr asked McEntee, “What’s this all about?” recounted one of the former Trump officials.

McEntee demurred and checked his phone. They were waiting on others, he told Barr.

Fuming, Barr walked out of the room and barged into Meadows’ office. “What the f— is going on?” he asked.

In a very brief conversation, Meadows shook his head and said he hadn’t known the Roosevelt Room encounter was going to happen and told Barr not to worry about it.

Then, in a meeting later that day with both Meadows and White House Counsel Pat Cipollone, Barr demanded to know what was happening. When told that Trump wanted to replace Wray with Evanina and make Patel the deputy director of the FBI, Barr calmly told them he couldn’t stay in his job if Trump’s preferred picks were installed at the FBI over his objection, two of the former officials familiar with the encounter said.

Cipollone, who also said he was completely unaware of what was going on until that day, sided with Barr: He told his two colleagues that the attorney general should be involved in the decision process about who should be FBI director, and that Wray should stay.

And that was it: The White House ultimately backed off on the plan once they realized Barr would quit, according to two of the former Trump officials.

“They were hoping it would be a fait accompli,” one said — and Barr would just make the personnel change happen.

One reason to place Evanina and Patel at the FBI, according to a former Trump administration official, was to have what the White House considered “trusted people” at those agencies.

Evanina had many of the right credentials: He had spent 24 years in the FBI, including in senior roles. He was later detailed to the CIA as the chief of the agency’s counterintelligence division and counterespionage group before becoming head of the National Counterintelligence and Security Center in 2014, a post he left this past January.

Installing Patel, however, would be controversial. He was a sharp critic of the intelligence and law enforcement community, especially in regards to its treatment of Trump. And the administration also would have had to do something with the existing deputy director, David Bowdich, who was well-liked and respected among FBI agents.

Patel — in an earlier role as a top adviser to Rep. Devin Nunes, the top Republican on the House Intelligence Committee — had led the California lawmaker’s efforts to rebut special counsel Robert Mueller’s Russia investigation. He later joined the staff of the National Security Council, where he became the senior director for counterterrorism. At the time of the White House meeting in April, Patel had recently switched jobs to become a senior adviser at the Office of the Director of National Intelligence.

The April meeting would not be the last time Trump raised the idea of firing Wray, however, including in conversations with Barr directly. Even after this dramatic episode, the president broached the topic once or twice, although less aggressively.

“When you thought it had finally quieted down, the next thing you know, he would want to do it again,” one former Trump official said.