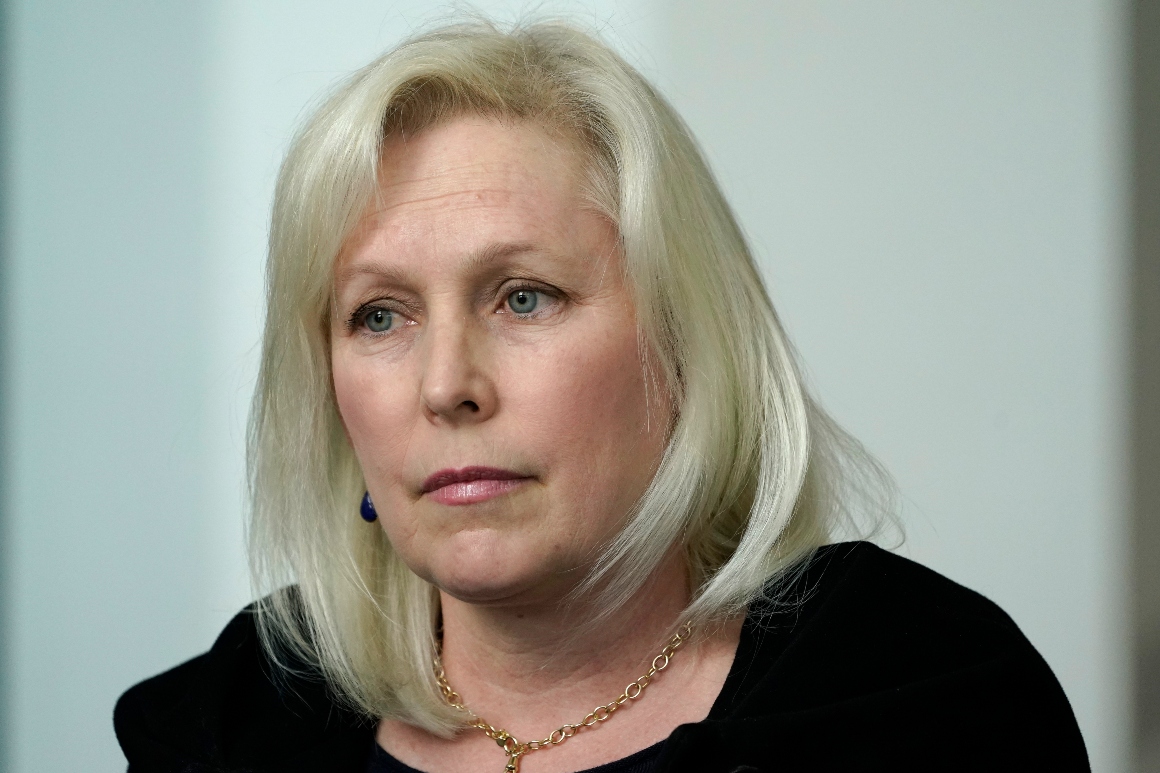 Progressives are ready to pull the plug on President Joe Biden’s weeks of infrastructure negotiations with Republicans.

Liberal Democrats are speaking out at an awkward time, as Biden’s Cabinet officials held their latest talks with Senate Republicans on Tuesday, but many of them have already moved on from the White House’s efforts at bipartisanship. These Democrats say they’re worried that by cutting a deal with the GOP on roads and bridges, they risk losing out on a generational opportunity to expand paid family leave and child tax credits and invest in green energy.

Asked if the Biden administration should keep talking to Republicans about a bipartisan infrastructure deal, Sen. Kirsten Gillibrand (D-N.Y.) replied: “Absolutely not. Because we might lose our coalition for human infrastructure.” Instead she’s “100 percent” in favor of pushing through a multitrillion-dollar package using the blunt partisan mechanism of budget reconciliation.

“I do not think that the White House should relegate recovery to the judgment of Mitch McConnell, because he will not function in good faith,” said Gillibrand, who made her case recently to Bruce Reed, Biden’s deputy chief of staff. “So, I just think it’s a terrible political misstep.”

House progressives sent their own warning shot Tuesday to Speaker Nancy Pelosi and Senate Majority Leader Chuck Schumer, arguing in a letter that Democrats should pursue a multitrillion-dollar megabill sweeping Biden’s priorities together, “a single, ambitious package combining physical and social investments hand in hand.” It’s the strongest sign yet that a growing number of liberals are done with trying to cut an infrastructure deal with Republicans that costs $800 billion at most and kicks other priorities down the road.

“They’re not being even players and we should just move on without them,” said Rep. Ruben Gallego (D-Ariz.), one of roughly 60 House liberals who signed the letter. He dismissed the GOP’s $800 billion plan as a “counting gimmick” rather than a serious proposal: “Time to pull the trigger.”

Rep. Mark Pocan (D-Wis.), another senior progressive, called the GOP’s latest counteroffer “ridiculous” and said the Republican list of proposals to pay for it might as well have included a “bake sale” to help raise funds.

“At what point do they seriously come to the table?” Pocan said, noting that Republicans could still back the Democrats’ effort when it comes to the floor. “If they don’t come to the table, it doesn’t mean we don’t serve the meal.”

If Tuesday was any indication, Biden and Republicans are miles away from a deal. During a meeting at the Capitol between a half-dozen GOP senators, Commerce Secretary Gina Raimondo and Transportation Secretary Pete Buttigieg, the two sides discussed the basics of how to pay for a bill but didn’t settle on a topline number or other basic elements of the bipartisan negotiation. Sen. Shelley Moore Capito (R-W.Va.) cited progress but observed: “We still got a ways to go.”

At the moment, however, liberals’ preference to leave the GOP behind is limited by their own party’s narrow majorities. Senate Democrats don’t quite have the votes to move forward with their own, unilateral approach the way they did in March with the $1.9 trillion coronavirus relief bill. Sen. Sheldon Whitehouse (D-R.I.) said one gargantuan reconciliation bill “would be quicker and easier, but we don’t seem to have the votes for it.”

For now, Schumer and Pelosi are staying publicly in sync with Biden’s bipartisan hopes, and the Senate leader is even advancing through a bipartisan competitiveness bill to show he’s serious. But that may change, bringing along centrists like Sen. Joe Manchin (D-W.Va.), if talks between the Biden administration and the Republicans collapse.

And Democratic leaders are preparing contingency plans for if that does happen.

“We ought to have a timely negotiation with the Republicans, but be prepared to go to reconciliation if we must,” said Senate Majority Whip Dick Durbin (D-Ill.).

In the House, liberals say they fully expect Pelosi and Schumer will eventually have to ditch the negotiating table to craft a broader package without the GOP. Many have said privately for months that there was no chance Republicans would come on board — because of the price tag, but also the GOP’s eagerness to block the Democrats’ entire agenda for political gains.

Patience has begun to run thin among many progressives, particularly as many of their GOP counterparts refuse to say that Biden fairly won the election and oust a member of their House leadership team amid rising personal tensions. What’s more, Republicans have offered an infrastructure deal that liberals view as anemic: Less than $1 trillion paid for with unspent coronavirus aid, expanded tax enforcement and public-private partnerships.

“It’s not $800 billion compared to $2.3 billion,” said Rep. Ro Khanna (D-Calif.), arguing that the GOP’s version is inflated because it counts existing spending. The California Democrat said he’s willing to wait out Biden’s negotiations with the GOP, but just for a few more weeks.

“I think we should move forward with our bill,” Khanna said.

Many House Democrats say they expect talks on a party-line bill to intensify by June, when lawmakers return from a three-week work period. They believe formal GOP talks will have fizzled out by then, paving the way for their leadership to put its budget on the floor and formally start the clock for a Democrats-only reconciliation bill. Pelosi has said she hopes to bring a bill to the floor by the July 4 holiday weekend.

House Majority Leader Steny Hoyer said Tuesday that Democratic committees will spend next week working on their pieces of Biden’s bill “so that they can be ready to move ahead on — in whatever way we decide.”

Liberal groups, meanwhile, are making clear where they want their party to turn on the big weighty economic issues of the day: away from the Republicans. Ezra Levin, a co-founder of Indivisible, said the best-case scenario is that Biden’s party gets “a few GOP votes for things the Democrats could have just passed on their own. Worst-case scenario, the GOP successfully wastes enough time to scuttle the whole effort.”

“The only two scenarios for Democrats are to go big or get nothing,” said Adam Green, a co-founder of the Progressive Change Campaign Committee. “Any bipartisan bill would not just throw overboard a couple progressive priorities but pretty much throw overboard everything the White House says the country needs right now.”

Several liberal Democrats also argue that GOP leaders are proving themselves to be unreliable negotiators. They point to McCarthy’s attempt to fundraise off a recent White House meeting, urging donors to help him block the “radical Democrat agenda from destroying our country” just minutes before sitting down with Biden. Then there was the vow by Senate minority leader McConnell to spend “100 percent” of his focus “standing up to the administration.”

Some on the left contend that the GOP talks could be productive, arguing that a bipartisan bill would be simpler — since it wouldn’t require squeezing a bill through the Senate restrictive budget rules — even if it’s not everything Democrats want. Those liberals say it makes little sense for Democrats to pass something in the House that can’t survive the Senate.

In the end, even if Biden consummates a deal with Republicans on a bill boosting physical infrastructure, Democrats will want a road map to what’s next. Leaving behind the president’s proposed multitrillion-dollar investment in the social programs they call “human infrastructure” is simply not an option for most progressives.

“I know all of the reasons why a sweeping, huge $4 trillion package would not be possible,” said Sen. Richard Blumenthal (D-Conn.). “So I would certainly support a different plan. As long as there is a plan.”