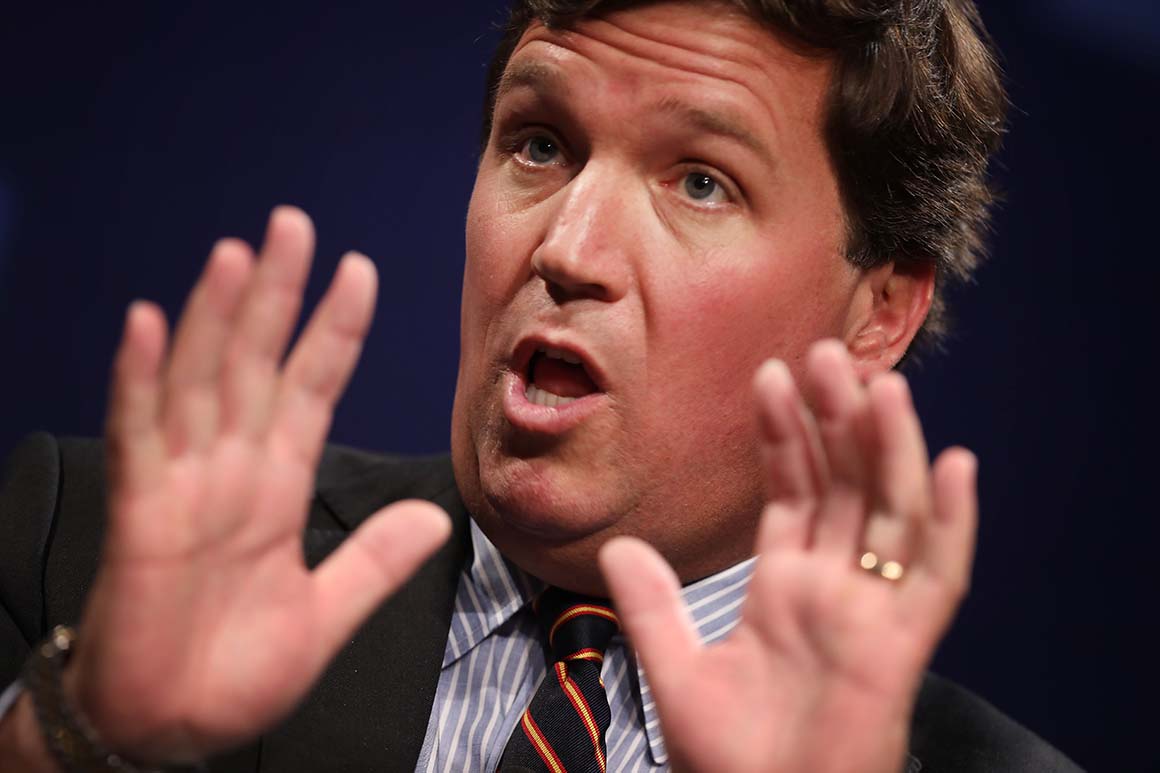 As eight candidates vie for the post being vacated by Mayor Bill de Blasio — a favorite punching bag for conservatives — right-wing media is showing its fascination with an election that, to many, will serve as a nationwide political referendum on the future of Democratic cities.

In the same breath they criticize liberals for “woke” identity politics, right-wingers are finding things to like about the two frontrunners — Andrew Yang and Eric Adams. Pundits like Tucker Carlson have expressed admiration for Adams, the Brooklyn Borough president and former police captain who has said he’ll carry a licensed firearm as mayor if faced with a credible threat. Former Trump adviser Stephen Miller and Sen. Ted Cruz (R-Texas) have voiced support for policies espoused by Yang, the former presidential candidate who became famous for his universal basic income proposal and has shown a libertarian streak.

These national-level incursions are having a tangible impact on what is technically a municipal race, with Adams forced to reply to Carlson’s praise with a harsh disavowal of the Fox News host, and the Yang campaign telling POLITICO they viewed Miller’s endorsement as sabotage. Yang himself dismissed the tweets from Miller and Cruz, saying “I would certainly never ask for or want their support.”

“Democrats themselves are saying Democrats have done a bad job in governing the city for the last eight years,” said Staten Island’s Joe Borelli, one of the few Republican City Council members. “So this is the first national spotlight on whether the electorate, even in a progressive city like New York, continues to go down this direction, or will they go with someone who’s a bit more moderate in their policing approach.”

The fact that the two leading Democrats in this deep blue city are compelled to push back against support from Republicans is a sign of the symbolic place New York City now holds in national politics.

Though the last competitive mayor’s race in 2013 was largely a local matter, years of escalating divisions, culminating in Donald Trump’s presidency and its aftermath, have turned the city’s political scene into a right-wing target. Many of Trump’s loudest critics are New York-based as well — de Blasio, Rep. Alexandria Ocasio-Cortez, Majority Leader Chuck Schumer and the heart of the mainstream media — further solidifying New York’s reputation on the right as the incarnation of unchecked progressivism.

But conservative interest in the mayor’s race is primarily about the future of policing, and how it might set the standard for the rest of the country. The George Floyd protests of a year ago, which led to cries to defund the NYPD and curtail its role in city life, further solidified the right’s view of New York as a crime-ridden hellscape, despite decades of steadily improving public safety numbers.

But with the rise in gun violence in the city over the past year, the Democratic primary has become something of a litmus test for the popularity of the defund movement.

“For better or worse, because everyone looks to New York City and pays outsized attention to it — or as maybe the most populous city in America, you can say it’s the right amount of attention — there is a way that it informs the policy agenda [nationwide],” said Michael Hendrix, a research fellow at the conservative Manhattan Institute. “People say, ‘I want to learn from New York’s successes or from its failures.'”

It’s also, inevitably, a measuring stick for politicians across the country.

“People want to know ‘What’s your answer to what’s happening in New York?’” Hendrix said. “And maybe they frame it as a local question, but in their mind they may be thinking of an example in New York … and then now applying that to: How are you going to respond to that in Nashville, if that were to come?”

For now, the right’s favorite in the race appears to be Adams, a Black former Republican cop whose position on crime puts him in stark contrast to other New York progressives.

“The current mayor spends half his life opining on global warming, even as he pollutes the atmosphere with his weed smoke. Eric Adams is actually serious about fighting crime,” Carlson said during his May 7th episode, a widely-watched monologue. “How serious? He said if he becomes mayor he plans to carry his own gun. Can you imagine Bill de Blasio doing that? He’d shoot himself by accident.”

Within minutes, as rival campaigns pounced, Adams had rejected Carlson’s endorsement, saying he did not need the support of him or “anyone else who perpetuates racist, anti-immigrant propaganda.”

Adams has also racked up endorsements from right-leaning outlets, such as the New York Post and the Jewish Press — whose chief editor, Elliot Resnick, was among the Capitol rioters on Jan. 6. He’s won plaudits in op-eds on sites like The Blaze and the Daily Caller, placing him in an awkward position.

“Eric is a proud Democrat who has always stood up for Democratic values — including police reform, racial equality and workers’ rights,” said campaign spokesperson Evan Thies. “For a few years more than 20 years ago he changed his party status to protest Democratic politicians’ support for the racist crime bill and Rockefeller drug laws.” Thies also pointed to Adams’ harsh condemnation of Resnick over his attendance January 6th insurrection and expressed sympathy with its attendees.

The Yang campaign has maintained it is being trolled by Miller and said it rejects his support as well. At least one of Yang’s rivals, Comptroller Scott Stringer, drew an attack from Miller and relished the opportunity to tangle with a Trump luminary.

“I don’t want the support of anyone who thinks the words ‘Trump’ and ‘humane’ belong in the same sentence,” Stringer tweeted this week. “I wish my opponents felt the same way.”

Yang himself has been a libertarian darling since the beginning of his political career, where he aimed to win the Democratic nomination by swaying Trump voters to his side through his economic policies. During his campaign, he appeared on several conservative outlets to make his case, winning admiration for his approach to universal basic income.

He’s also racked up an impressive roster of endorsements from Orthodox Jewish rabbis, who represent communities that made up some of Trump’s most ardent supporters in the 2020 election.

In the early days of the primary, candidates like Stringer and former de Blasio counsel Maya Wiley built their campaigns around engaging the city’s progressive base. Several polls, however, have challenged the notion that the primary would be a race to the left: Yang and Adams are consistently in the lead, followed, somewhat distantly, by Stringer and the other progressive candidates.

The Manhattan Institute’s recent poll on the mayoral race suggests that public safety and crime reduction is on the top of likely voters’ minds. Though 79 percent of respondents suggested that they would like New York to become more “socialist” — specifically, favoring tax increases on the wealthy, free education and guaranteed income — roughly half of likely Democratic voters approved of the NYPD’s performance, and only 18 percent wanted to see less police presence in their neighborhoods.

And when asked, 49 percent of respondents did not want to defund NYPD and reallocate the money to social programs. To Hendrix, that indicated a bright line in overall voter priorities.

“If you think big picture and you throw a whole bunch of ideas out, with the most positively framed ideas for socialism, you could in theory drum up some good support here. But again, the Devil’s in the details: what do you actually mean by that?” he asked rhetorically. “And if you mean getting rid of police from your neighborhood, if you mean [wanting] to place severe limits on housing developments, potentially, there’s not as much support for that.”