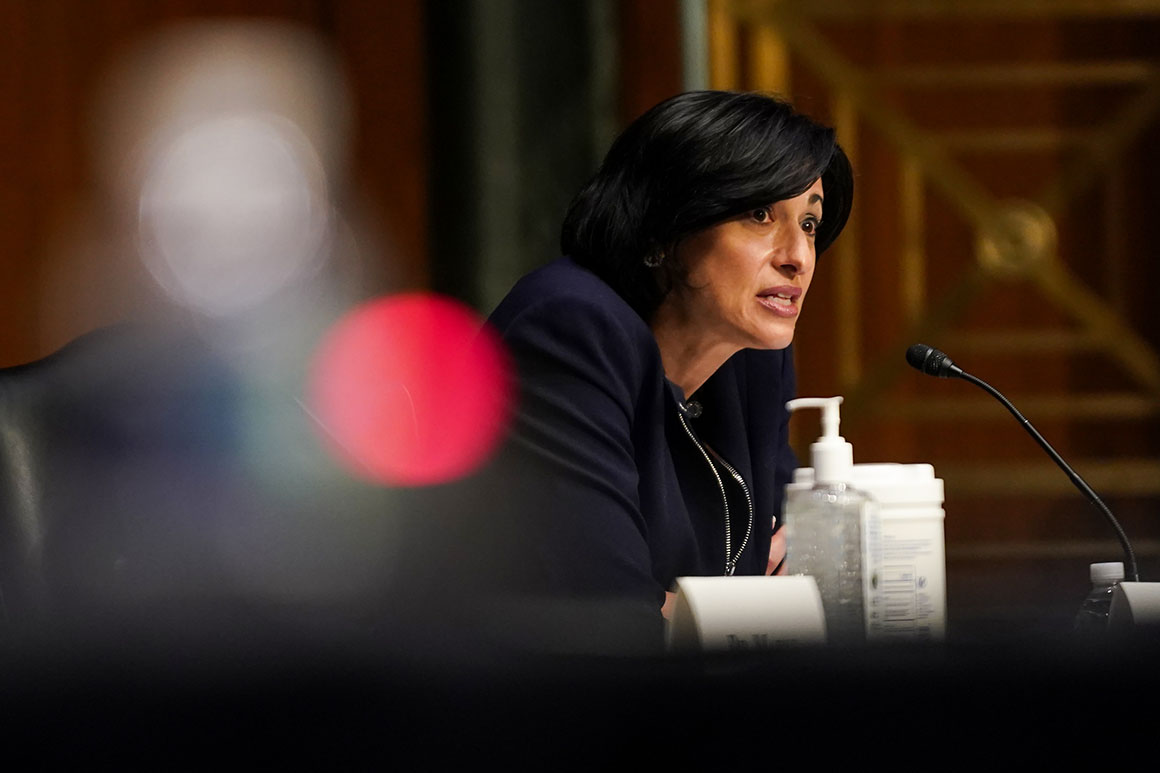 Centers for Disease Control and Prevention Director Rochelle Walensky is shaking up the agency’s Covid-19 response to consolidate oversight amid mounting criticism over its guidance for vaccinated people, according to three senior health officials with the knowledge of the situation.

The changes in recent weeks include creating a clear reporting chain from the new director of the agency’s vaccine task force — which helped rewrite rules for mask-wearing — up to Walensky. The head of that task force had originally reported to both CDC and the White House. Walensky has also reshuffled the CDC’s pandemic modeling and data, analytics and visualization task forces.

At the same time, the agency is weathering its first high-level departures during the pandemic. Last month, the agency’s chief respiratory disease scientist and vaccine task force leader Nancy Messonnier announced her resignation shortly after Walensky rejiggered the task force’s reporting structure. And on Monday, the CDC’s second-in-command, principal deputy director Anne Schuchat, said she would retire this summer.

The loss of two longtime CDC leaders combined with Walensky’s reshaping of the Covid-19 response is solidifying the CDC chief’s power, giving her control over some of the most critical policy conversations related to the pandemic. The changes she has made are also reinforcing her agency’s independence from the White House. As POLITICO has reported, several senior White House officials — including some on the White House Covid-19 task force — said the CDC did not warn them until the morning of the announcement that vaccinated people can forego masks in most situations.

Another senior administration official with direct knowledge of the situation said Walensky limited news of the upcoming change to a small group of CDC officials so the agency could better control messaging and did not brief local and state public health officials and public policy groups across the country.

Walensky decided to overhaul the structure of the agency’s Covid-19 response after several listening tours within CDC revealed pandemic task forces that were either no longer serving their original mission or that could be streamlined under a central leadership structure, a senior health official with knowledge of Walensky’s thinking said. As the number of new infections has dropped, the CDC’s focus has shifted to offering advice aimed at helping Americans return to normalcy — such as telling vaccinated people that they can forego masks in most situations.

A senior Biden health official described the reshuffle at the CDC as “a long time coming.”

“When Biden entered office, there were some very early conversations about how the CDC was going to be handled … who was going to lead it and what it needed to do to get back on track,” the senior health official said. “Dr. Walensky was chosen for the top job and was highly sought-after. But I think it is fair to say there have been some hiccups over the last few months that have created some tensions within the agency. And I think we’re starting to see the CDC director make some moves to change things.”

In a statement, CDC spokesperson Jason McDonald said the agency has “reorganized the incident management structure to best suit each phase of the nation’s response to COVID-19.” He added that “previous reorganizations added efficiencies and improved collaboration.” Another senior CDC official said Walensky “is informed of changes but not directly involved with decision-making” on restructuring within the agency.

The first hint that a major reorganization was underway came in late April, when Messonnier — then-head of the Covid-19 vaccine task force — went on leave. At the time, CDC officials described it as an unplanned vacation. Behind the scenes, Walensky had decided that the vaccine task force should be placed squarely under the oversight of the agency’s senior leadership, rather than reporting both to CDC brass and the White House, three senior health officials said.

Messonnier, who had operated semi-autonomously, was told the vaccine task force would now report to the CDC’s incident response team overseen by Henry Walke, director of the agency’s Division of Preparedness and Emerging Infections, who reports to Walensky. Two weeks later, Messonnier resigned after about 20 years at the agency. It was one of the first high-profile departures from CDC during the pandemic, despite the months of pressure and attacks the agency had weathered from the Trump administration.

More recently, Walensky has reassigned agency employees who were previously part of the Department of Health and Human Services’ interagency Covid-19 workgroup, the “joint coordination cell,” which recently dissolved. Some of those officials have either gone back to working their normal CDC jobs full time or are serving on CDC task forces.

Through all of these changes, the agency was writing and rewriting its guidance on safety protocols for vaccinated people.

The CDC drew up the first version of that advice in early March. After two days of meetings and calls with senior officials on the White House’s Covid-19 task force and HHS, the CDC was told to “hold off on releasing” the recommendations, as POLITICO previously reported. A senior White House official denied any interference and said the CDC merely needed time to read officials in, not change the guidelines.

Three weeks later, the agency put out a major update: Vaccinated people no longer needed to wear masks indoors or outdoors when in small groups with other fully vaccinated friends and family — and in some circumstances could go maskless with unvaccinated people.

That version of the guidelines came under widespread criticism. People within the Biden administration complained that CDC’s language was confusing. Republicans on Capitol Hill and across the country argued that the agency was too cautious and prescriptive in ways that limited the activity of vaccinated people.

CDC officials have long argued that the vaccine guidelines only evolve as the science becomes available and supports changes. But a senior administration official with knowledge of the situation said officials inside the CDC, White House and HHS have often disagreed on whether to loosen restrictions for vaccinated individuals.

At the end of March and beginning of April, several officials inside the CDC argued the science did not support rolling back things like mask mandates, particularly because the guidelines could signal that it was safe for all Americans to forgo adhering to public health measures. Other senior officials argued the country had vaccinated enough individuals that it was safe to give those people the choice to visit with other fully vaccinated Americans.

A change in leadership

Walensky decided to put Walke in charge of the next phase of vaccine guidelines just days before Messonnier officially resigned. On May 13, a week after Messonnier officially quit, the CDC said vaccinated people can remove masks in any kind of group gathering — big or small, indoors or outdoors, no matter who is present.

The decision marked a significant change in tone for the health agency, which for months slow-walked the rolling back of public health measures, even for vaccinated people. CDC officials had feared that moving faster would encourage the spread of new, highly transmissible Covid-19 variants that would reverse the country’s progress toward ending the pandemic.

“My sense is that there has been more and more real world data that has emerged that has guided the CDC in its decision making, especially on these recent guidelines,” said John Moore, a virologist and professor of microbiology and immunology at Weill Cornell Medicine. “There will be confusion over the next several weeks. Everyone has to develop their own comfort zone with the guidance.”

Health officials and experts across the country decried the new CDC advice, saying the agency’s recommendations would be difficult for state and local officials to implement and enforce.

“I would expect the CDC to recommend to local and state public health departments that when your vaccination coverage is at this level, when your cases are at this level … that is when you can locally recommend lifting mask requirements for vaccinated people,” said Celine Gounder, an infectious disease expert at New York University and a former adviser for Biden’s transition Covid-19 advisory board. “That is not what happened in this case.”

A senior health official working on the vaccine said the agency does not have the ability or wherewithal to craft local public health guidelines, and that it was up to local officials to find ways to guide their communities.

“The CDC just can’t win. First they are told that they are being too careful, too cautious with masks and travel,” a senior HHS official told POLITICO. “Then, they go forward with recommending getting rid of masks for vaccinated people and they are targeted for doing too much too soon. I mean, which is it? I think what’s clear is that there is a much clearer process to these things now.”