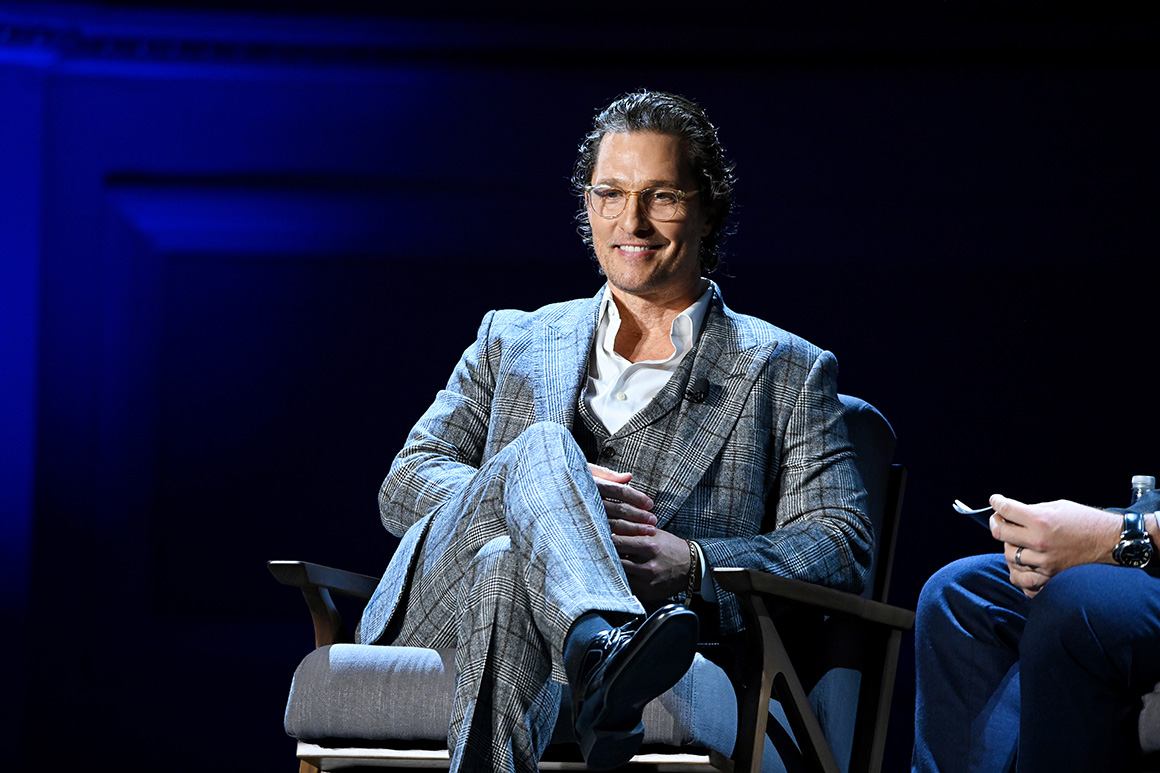 Matthew McConaughey has publicly said a run for Texas governor in 2022 is a “true consideration.”

But the Academy Award-winning actor’s interest goes a step further than musings in interviews. McConaughey has been quietly making calls to influential people in Texas political circles, including a deep-pocketed moderate Republican and energy CEO, to take their temperature on the race and to talk about seriously throwing his hat in the ring, according to multiple people familiar with the conversations.

Most political strategists say they doubt McConaughey, a Texas native, will sacrifice his status as a beloved cultural icon in the state for the dirty business of politics. They don’t see a viable path forward, either, pointing to Republican Gov. Greg Abbott’s backing among the business community and millions in the bank — but the state’s political class is keeping a close eye on the Hollywood star’s plans nonetheless.

“I find it improbable, but it’s not out of the question,” said top Republican strategist Karl Rove, who relayed a recent encounter with Lawrence Wright, describing the New Yorker journalist as “hyperventilating” at the prospect that his close friend and fellow Texan might run. (Asked for comment on McConaughey, Wright replied in an email, “I’m trying to lower my profile in this, so I’ll politely decline.”)

Rumors have been swirling around a potential McConaughey run for months, and the actor has been less than coy about his interest in politics and public leadership. Despite his superstardom, McConaughey remains a Texas resident — he lives in Austin with his wife Camila and three children. He has become a kind of celebrity mascot for the state with his role in public service announcements during the coronavirus pandemic and his “just keep livin” foundation, which works with young people and has raised millions for victims of the devastating ice storm that hit Texas. At his alma mater, the University of Texas at Austin, he has been named “Minister of Culture” and is professor of practice at the Moody College of Communication.

“I’m a little more surprised that people aren’t taking him more seriously, honestly,” said Brendan Steinhauser, an Austin-based GOP strategist. “Celebrity in this country counts for a lot … it’s not like some C-list actor no one likes. He has an appeal.”

There’s little question that McConaughey — who became a household name for his starring roles in top films like “Dazed and Confused” and “Dallas Buyers Club,” delivering memorable lines in his signature languid drawl — would draw national media attention should he enter the race against Abbott.

What’s less clear is what kind of platform McConaughey would run on or even which party banner he would run under. McConaughey has been peppered with questions about politics and news of the day while promoting his memoir, “Greenlights,” but overall, has been vague about his political leanings, saying little about specific issues or policies.

The political calculations for a decision about party affiliation would also be tricky.

“The question is: Would he run as a Republican? A Democrat? Independent? And where is he on the political scale? He says he has a funny phrase about being a hardcore centrist, but what party would he run under?” said Rove.

A spokesperson for McConaughey did not comment on the record for the story.

Abbott, 63, is planning to run for a third term, and he has maintained support of Republican voters even after his shaky handling of the ice storm that wiped out the state’s electric grid and cost more than 100 lives. He already faces a primary challenger from the right wing of the party with former state Sen. Don Huffines, who is running in the pugilistic style of Donald Trump. And there is speculation that Texas GOP chair Allen West and Sid Miller, the current Texas agriculture commissioner, will enter the race, too. Still, Abbott remains the overwhelming GOP favorite and over the years has built out a significant political machine that others would struggle to match.

A McConaughey run as an independent would likely strip both Democratic and Independent voters away and tip the scales in favor of Abbott.

“The problem with running as an independent is we have seen this movie before,” said longtime Democratic strategist Paul Begala, pointing to Gov. Rick Perry’s 2006 win.

Back then, quirky singer-songwriter Kinky Friedman and former Texas Comptroller Carole Keeton Strayhorn ran as independents, and while they finished behind Perry and Democratic candidate Chris Bell, they still managed to pull in 12 and 18 percent of the vote, respectively — votes Democrats say were pulled away from Bell. A Democrat has not been governor of Texas since Ann Richards, 26 years ago.

Meanwhile the Democratic Party has no announced candidate as of yet. Former Rep. Beto O’Rourke, whose 2018 Senate run against Ted Cruz vaulted him into national prominence and a failed presidential bid, has yet to make a decision about whether or not he enters the race.

Gilberto Hinojosa, the chair of the Texas Democratic Party, said that if McConaughey chose to run on their ticket, he would “welcome him.”

“He’s young, good-looking, smart and has a little wildness — but this is Texas. We like that stuff,” Hinojosa said. “He has not reached out to the party that I know of. It’s absolutely up in the air.”

But, Hinojosa cautioned, “If he wants to run as an independent, he’d be a spoiler and guarantee Abbott gets elected.”

“Everybody loves you until you take a position. Right now you have a blank slate. You could go to a campaign event with him and get to meet a movie star but it’s a little different when he says he’s pro-life or pro-choice and there’s 50 other issues you could pick on that would have the same effect,” said a senior Texas Republican operative. “There’s a difference between asking if it’s a good idea or really running.”

McConaughey has, so far, kept his political cards close to chest, leaving operatives from the left and the right to speculate about which side of the aisle he’d land on. He has not made any political contributions to candidates, and according to the Texas Tribune, he has not voted in a Texas primary since 2012.

He is also likely to run into heightened skepticism about experience-free politicians in the aftermath of Trump’s tumultuous presidency.

“I think there’s an impression of, ‘Do we really need another celebrity candidate in the midst of this?’” said Matthew Dowd, founder of “Country Over Party” and former chief strategist in the Bush-Cheney administration.

Dowd also raised the prospect that serious scrutiny in the press could yield some tough, embarrassing coverage for the free-living McConaughey. “I don’t know how beating bongo drums naked in your front yard goes over in rural Texas,” he said.

Abbott remains the favorite in the state, with a 77 percent approval rating among Republicans according to the Texas Politics Project at the University of Texas at Austin. And some Abbott allies shrugged off the idea of a Hollywood star without political experience swooping in and bumping Abbott from the governor’s mansion. Some movie stars lacking political experience, such as Ashley Judd from Kentucky, have flirted with the idea of running for office and in the end decided to sit out. But others, such as Ronald Reagan and Arnold Schwarzenegger in California, pulled it off in years past.

And McConaughey can flaunt an authenticity other celebrities often lack: He grew up in Uvalde, a sparsely populated county in Texas’ famous hill country, that was also home to other political heavyweights such as John Nance Garner, who became FDR’s vice president, and Dolph Briscoe, a Democratic governor of Texas in the 1970s. He also has personal ties to the moneyed oil world in Texas: His brother, Mike “Rooster” McConaughey, is a self-made millionaire in Midland.

One Austin-based Republican operative said they’re not taking the McConaughey chatter too seriously — at least for now.

“If he starts a PAC, gets a website, that would be a real signal,” said the Republican. “A lot of this seems like telephone chatter — one person passing it to another person.”

Still, McConaughey has managed to capture the imagination of the state’s liberal punditry.

“Texas may not be ready for a philosopher king as a candidate, much less governor, but it sure would be fun to watch Mr. McConaughey debate Mr. Abbott and ambush him with a sensible line like this one from ‘Greenlights’: ‘I’ve found that a good plan is to first recognize the problem, then stabilize the situation, organize the response, then respond,’ wrote Mimi Swartz, the executive editor of Texas Monthly, for an op-ed in The New York Times this week.

When asked about the response to her article, Swartz emailed, “A lot of people seemed to think, yeah, why the hell not?”