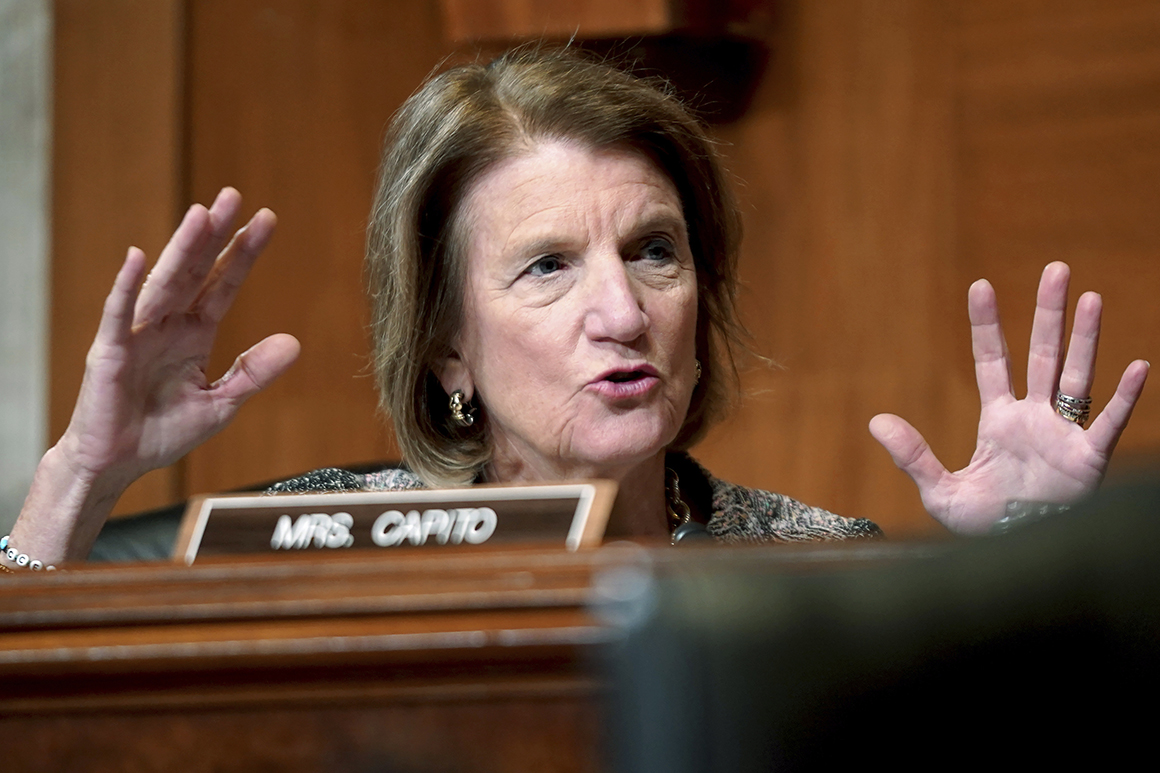 Senate Republicans plan to present the White House with another infrastructure counteroffer Thursday, even as the prospects for a bipartisan deal grow increasingly dim.

“I think we were pretty clear on where we define physical infrastructure and I think the American people are behind us on this,” GOP lead negotiator Sen. Shelley Moore Capito (R-W.Va.) told reporters Tuesday. “I think we’ve got good momentum, but we’ll see what their reaction is.”

Capito’s remarks came after she huddled Tuesday morning in her office with the five other Senate Republicans who engaged in direct talks with the White House. While neither the White House nor the GOP negotiators are giving up yet, members of both parties privately acknowledge that they’re at a stalemate and that the most likely outcome at this point is Democrats will ultimately go it alone on infrastructure.

President Joe Biden’s White House and Senate Republicans remain about $1.5 trillion apart and have yet to even agree on the definition of infrastructure. After a Zoom call with White House officials Friday, Senate Republicans said both sides were only getting further apart. And they appear to be making little progress on how to pay for it, as they approach the Biden administration’s informal deadline of Memorial Day.

Speaker Nancy Pelosi is aiming for the House to pass an infrastructure bill by July 4 and Senate Majority Leader Chuck Schumer said Tuesday that the Senate will proceed that month.

“It has always been our plan, regardless of the vehicle, to work on an infrastructure bill in July,” Schumer said. “And that’s our plan — to move forward in July.”

Democrats have suggested revising the Republicans’ 2017 tax bill and raising the corporate tax rate, a nonstarter for the GOP. Meanwhile, Republicans are proposing paying for an infrastructure bill through user fees and using unused money allocated for coronavirus relief, which Democrats reject.

Sen. Pat Toomey (R-Pa.), the top Republican on the Banking Committee and one of the GOP negotiators, said Republicans planned to “put out a clarification and revision” that will reiterate their “basic parameters.”

“They include the fact that an infrastructure agreement has to be about actual infrastructure, it’s about physical infrastructure, that’s one,” Toomey said. “Second, we’re not going to pay for this by undoing the tax reform that gave us the best economy of my lifetime. That is not on the table. And then finally, there is a tremendous amount of money that has been previously approved but that has not been spent.”

In addition to Capito and Toomey, Republican Sens. Roger Wicker of Mississippi, Mike Crapo of Idaho, John Barrasso of Wyoming and Roy Blunt of Missouri are also participating in talks with the White House.

“We are anxious to have a bipartisan agreement, a lot of us are working through our committees,” Capito said. Biden’s “staff has been very open and back and forth. There’s a lot that’s going on that’s not in the full exposure of the press and everything so it’s not like we’re running into closed doors and nobody will talk to us. We’re still talking.”