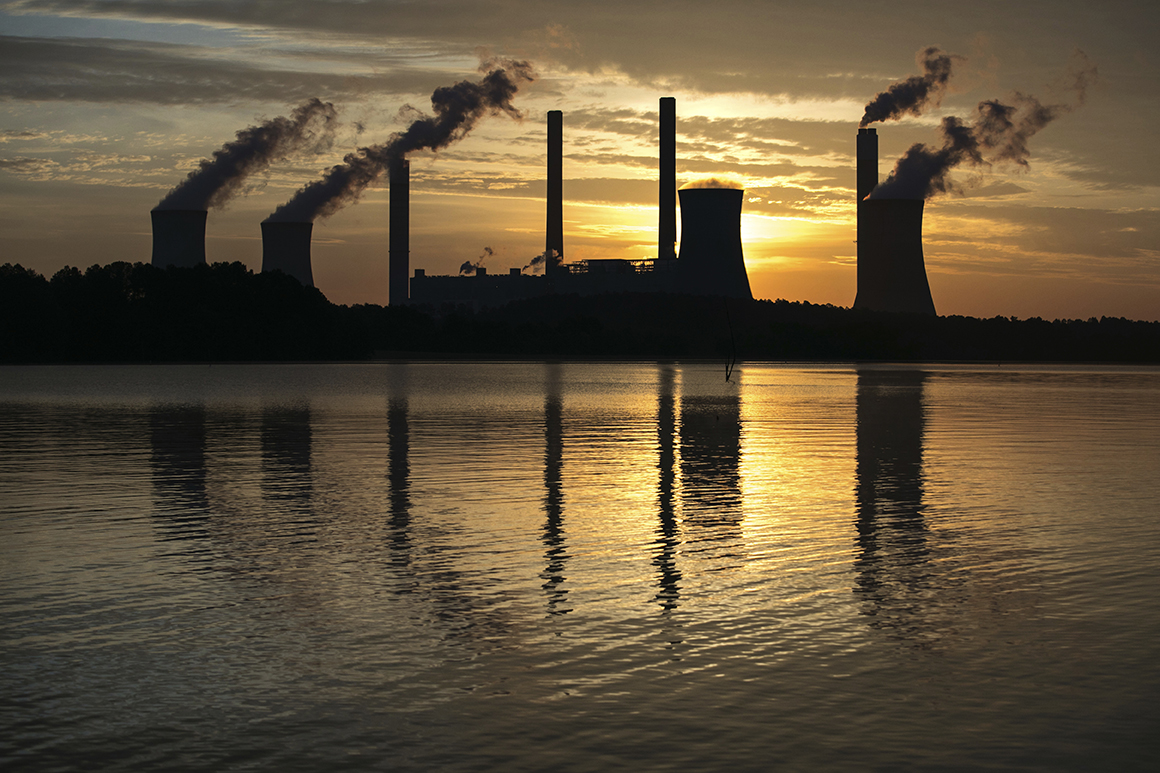 Support for putting a price on carbon dioxide pollution is steadily spreading — from environmental advocates who have long promoted it and the states already reaping billions of dollars from the idea to the business groups and free-market economists who see it as one of the most cost-effective ways to confront climate change.

Republican opposition — and Democrats’ reluctance — has kept anything resembling a carbon tax or cap-and-trade system on the sidelines in the capital for more than a decade, with discussions about one of the most potent tools to combat climate change largely relegated to think tanks. Some progressives have also joined the opposition, concluding that such pricing schemes aren’t effective at fighting climate change and don’t help reduce the pollution plaguing many marginalized or low-income communities.

Even President Joe Biden’s ambitious climate proposals omit any mention of putting a price on carbon dioxide, the greenhouse gas most responsible for heating the planet, though aides say he remains open to it.

But states accounting for a quarter of the U.S. population and a third of the U.S. economy have implemented carbon pricing regimes, most through a cap-and-trade program that covers much of the Northeast or a separate system operated by California. Washington state Gov. Jay Inslee on Monday signed a law that will impose perhaps the nation’s most comprehensive price on carbon, and Pennsylvania Gov. Tom Wolf is pressing for his state — long a top coal miner, and now a leader in natural gas production — to join the Northeast’s climate compact.

The states that have imposed carbon prices have seen their coffers swell with money to finance clean energy initiatives or environmental cleanups. But the potential for a major new revenue stream that could help pay for President Joe Biden’s $2.2 trillion climate-heavy infrastructure plan has so far not moved the needle on carbon pricing in Washington, D.C.

“There is what is scientifically necessary and politically possible,” said Rep. Sean Casten (D-Ill.), who worked in the clean energy sector prior to arriving to Congress. “Ninety percent of the conversation focuses on the latter rather than the former, and we just cannot afford to take our eye off the ball.”

Democrats fear that Republicans will frame carbon pricing as a tax increase, and they still bear the scars from their failed effort to pass a carbon cap-and-trade bill a decade ago — which many believe contributed to the party’s shellacking in the 2010 midterms that delivered control of the House to Republicans.

“They all remember the Tea Party wave. And so I think there’s some general skittishness around leaning into this issue among the leadership of our caucus,” Casten said.

Globally, more than 60 countries and regions employ various pricing schemes that touch most international companies, according to the World Bank. But in the U.S., resistance from big business and the GOP has traditionally been the biggest obstacle to establishing a nationwide carbon market. Now they are being joined by some emboldened progressives who are moving away from talk of a federal carbon price.

In California, which has had an economywide cap-and-trade system since 2012, carbon pricing has proven politically durable thanks to its $14 billion contribution to state revenue so far, and lawmakers reauthorized the system in 2017 with a two-thirds, bipartisan vote. But progressives have soured on it, saying its cap on emissions is too generous to polluters.

“Progressives in California have come to take a much dimmer view of certain aspects of the California climate policies, in particular the cap,” said Michael Wara, director of Stanford University’s climate and energy program. “I do think, though, that the thing that the cap and trade enabled, which is investment across a wide variety of climate-related areas, is something that has really become dominant in D.C. in progressive conversations around how to address this issue.”

Progressives have cited a study showing the state’s carbon market has had little effect on reducing conventional pollution, a goal of environmental justice groups focused on the disproportionate burden placed on low-income areas and communities of color.

“In California, commodifying pollution through current market mechanisms has led to modest reductions that are not sufficient to reach goals necessary to stabilize our climate nor to protect communities’ health,” said Roger Lin, climate and air counsel with the California Environmental Justice Alliance, in an email. He cited problems with the carbon offsets allowed under the program.

“There is instead an urgent need to prioritize other actions, especially the direct reductions of [greenhouse gases] and co-pollutants from all large stationary sources of industrial pollution,” he added.

The business of America

For years, opposition from corporations helped prevent any carbon pricing plans from gaining traction in Congress, but now the business lobby has changed its tune. The American Petroleum Institute, U.S. Chamber of Commerce, National Association of Manufacturers and American Chemistry Council have all endorsed carbon pricing as a means of controlling emissions. And all say they are actively lobbying Congress to adopt a pricing scheme. So far, however, they have little to show for the effort.

“All this work and time and energy has been put into getting the business community to the table, and we are now. And nobody wants to do it anymore,” said Ross Eisenberg, vice president of federal affairs at the American Chemistry Council.

The Climate Leadership Council, whose members include Ford, BP, Exxon Mobil and Shell, says it received positive responses from Republicans after circulating a report framing the issue as one of U.S. economic competitiveness. That document found the U.S. would benefit from a border-adjustable carbon tax in part because American-manufactured goods are 80 percent more carbon efficient than the world average.

The Alliance for Market Solutions, which advocates for carbon pricing, this week launched a new advocacy push, seeded with a high six-figure investment from Dow Chemical and Exxon Mobil, for carbon pricing on Capitol Hill, according to its executive director Alex Flint.

“This commitment by Dow and Exxon Mobil demonstrates they are serious about engaging Republicans on climate policy and on a carbon price, in particular,” Flint said. “They see climate being a real issue and that a government response is inevitable. It’s a choice between regulations and subsidies or creating a market mechanism that drives responsible climate policy.”

Many longtime carbon pricing backers remain skeptical of how heavily corporate America will lean into the policy this year that could be included in Biden’s massive infrastructure proposal.

“If anybody in corporate America actually wants to show up and be heard in a positive way on a climate bill, basically they better get off their rear ends right now,” Sen. Sheldon Whitehouse (D-R.I.), one of the leading climate action advocates in Congress, told POLITICO.

Still, he added that the absence of a carbon price from the current discussions shouldn’t be read as a sign it’s impossible.

“It wouldn’t surprise me if we had a clean electricity standard and a feed-in tariff and a carbon price,” Whitehouse said. “I think the danger is that [Democrats] find a comfortable place to hang together that doesn’t do the job.”

Other key lawmakers, such as House Climate Crisis Chair Kathy Castor (D-Fla.), see carbon pricing just “one tool in the toolbox” that can be used to tackle climate change.

“That cannot do it alone,” she said at an event sponsored by Ceres, a group of investors and executives who support clean-energy policies. “There are states that already have trading systems. Congress has a little more work to do before we go there. We have to understand the impact on those states that have those systems.”

Veterans of state-level fights say a carbon pricing mechanism may emerge as a possible solution as Democratic lawmakers close in on setting actual targets for emissions reductions.

“I think the fact that it isn’t happening as part of a bill being discussed right this minute is in no way a sign that it won’t happen,” said Mary Nichols, California’s former top environmental regulator who oversaw development of the state’s cap-and-trade program. “It’s not necessarily the first thing that you need to do and there’s many ideas out there about how best to do it, so it probably helps to figure out first what your goals are and then come up with the plan.”

Still, fears of political fallout and the need to attract the support of moderate Democrats like Sens. Joe Manchin of West Virginia and Kyrsten Sinema of Arizona leaves even some supporters unsure of its path forward.

“I don’t think it’s completely off the table. I think it less likely than more,” one environmental advocate in contact with Congress and the White House said of enacting a carbon price. “States have made tremendous progress across the country on climate action and those lessons should be replicated in how federal actors think about policy moving forward, but the politics is different in individual states as it is in the entirety of the country.”

There are ample lessons from carbon pricing — both in U.S. states and abroad — if Congress wants to heed them.

The Northeast’s RGGI, originally championed by Republican New York Gov. George Pataki, has by most metrics been successful at reducing emissions in member states, which numbered 11 after Virginia joined last year. Studies give RGGI at least partial credit for lowering power emissions, which have nearly been cut in half, helped by cheap natural gas supplanting coal-fired power plants.

And states have benefited from nearly $4 billion in revenue over the life of the program to invest in things like weatherization, energy efficiency and other programs that have created jobs and lowered energy bills.

Federal policymakers should take note of RGGI’s success, including elements that control costs if the price of carbon emissions allowances spike, or others that ensure pollution reductions if they drop too low, said RGGI Vice Chair Ben Grumbles. Rules allowing states freedom to spend the proceeds from carbon auctions are also a key design element.

“The RGGI experience has been steady, positive and bipartisan,” said Grumbles, Maryland’s secretary of environment under Gov. Larry Hogan, a Republican. “The steady component is an important one because it’s been a rock-solid performer despite big shifts in politics at the federal level.”