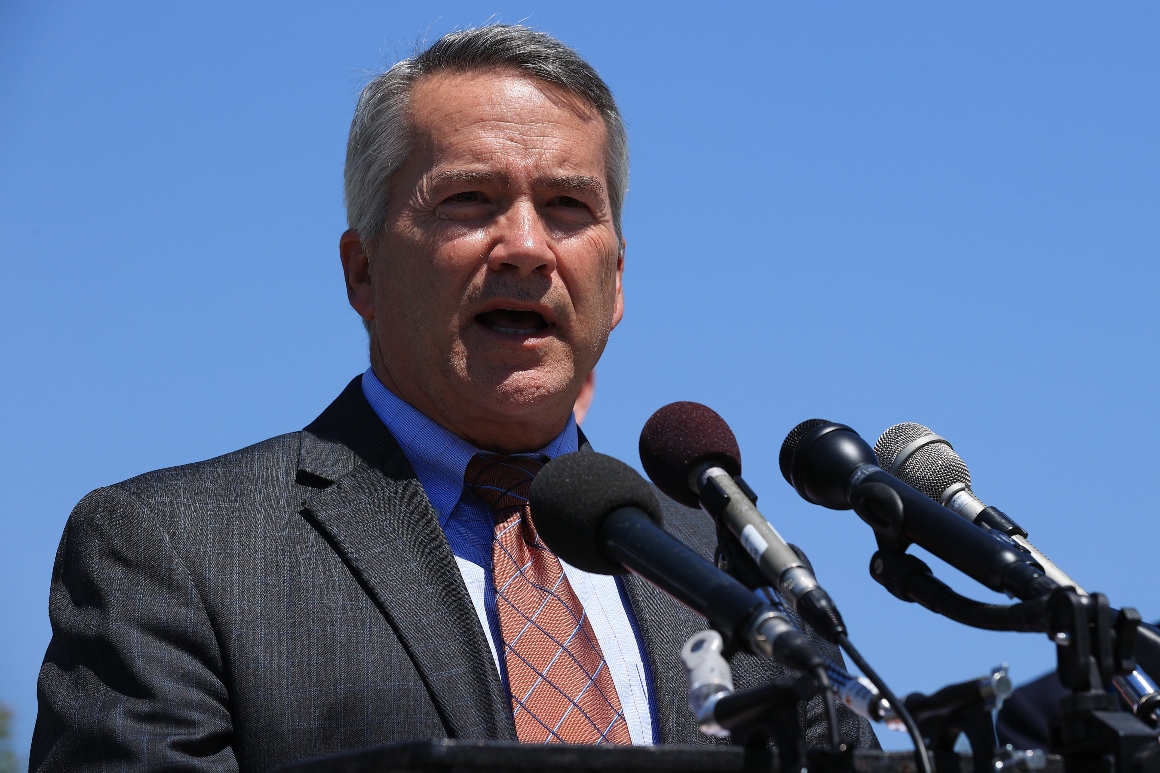 Republicans who sought to undercut or overturn President Joe Biden’s election win are launching campaigns to become their states’ top election officials next year, alarming local officeholders and opponents who are warning about pro-Trump, “ends justify the means” candidates taking big roles in running the vote.

The candidates include Rep. Jody Hice of Georgia, a leader of the congressional Republicans who voted against certifying the 2020 Electoral College results; Arizona state Rep. Mark Finchem, one of the top proponents of the conspiracy-tinged vote audit in Arizona’s largest county; Nevada’s Jim Marchant, who sued to have his 5-point congressional loss last year overturned; and Michigan’s Kristina Karamo, who made dozens of appearances in conservative media to claim fraud in the election.

Now, they are running for secretary of state in key battlegrounds that could decide control of Congress in 2022 — and who wins the White House in 2024. Their candidacies come with former President Donald Trump still fixated on spreading falsehoods about the 2020 election, insisting he won and lying about widespread and systemic fraud. Each of their states has swung between the two parties over the last decade, though it is too early to tell how competitive their elections will be.

The campaigns set up the possibility that politicians who have taken steps to undermine faith in the American democratic system could soon be the ones running it.

“Someone who is running for an election administration position, whose focus is not the rule of law but instead ‘the ends justifies the means,’ that’s very dangerous in a democracy,” said Bill Gates, the Republican vice chair of the Board of Supervisors in Maricopa County, Ariz. “This is someone who is trying to tear at the foundations of democracy.”

The secretary of state campaigns will also be tests of how deeply rooted Trump’s lies about the election are in the Republican base. Sixty-four percent of Republican-leaning voters in a recent CNN poll said they did not believe Biden won enough votes legitimately to win the presidency.

Hice and Marchant are running to replace sitting Republican secretaries of state, while Finchem and Karamo are seeking the GOP nomination in states with Democratic incumbents. None of the four campaigns responded to interview requests.

Trey Grayson, a former Republican secretary of state in Kentucky, said there are “two ways to look” at the risk posed by the campaigns: “There’s a symbolic risk, and then there’s … functional risk.”

Grayson noted that, depending on the state, secretaries of state often play ministerial roles in election certification and vote counting, with more direct oversight of the process falling to local county and city election clerks. That means that functional risk of electing pro-Trump election truthers as secretaries of state could be lower than many perceive.

But the symbolic risk could be much higher. “Any secretary of state who is a chief elections official is going to have a megaphone and a media platform during the election,” Grayson said. “A lot of the power is the perception of power, or that megaphone.”

As candidates and officials, the quartet of Republicans have used their megaphones to promote claims of widespread fraud in the 2020 election.

Finchem, the Arizona state representative, has been a major proponent of the audit of the results in Maricopa County. The Republican-run state Senate is running the process in the state’s largest county, which Biden narrowly won. The audit has been a lightning rod, attracting heavy criticism from GOP officials in Maricopa County who say the auditors are doing shoddy, conspiracy-fueled work — but nevertheless building up hope among Trump supporters who believe that he won the election.

Finchem appeared on the Twitch stream of Redpill78 — which The New York Times reported promotes the QAnon conspiracy theory — earlier this month, and said he has talked to Trump about the 2020 election. The mainstream media “keep[s] using this term ‘baseless,’” Finchem said on the Redpill show. “I hate to break the news to you, but just in case you news people haven’t been paying attention, there’s a lot of evidence that’s already out there. … We’ve got the proof, we’ve got the receipts,” he continued, calling the press a “propaganda machine.”

His appearance on the show was first reported by the Arizona Mirror, which also previously reported that Finchem had marched to the U.S. Capitol on Jan. 6.

Finchem has also frequently promoted claims of fraud on social media. “They ‘won’ by cheating, now they want to make cheating legal. WTH this Stalinization of America has to come to an end,” he wrote on Parler, the social media site popular on the right. Former Vice President Mike Pence “now cares about election integrity? This reveals that he must acknowledge that there was fraud,” he wrote on Gab, another site that caters to the far-right.

Last week, the Maricopa County Board of Supervisors — which includes Gates and is controlled 4-1 by Republicans — lashed out at the Arizona state Senate over the audit, calling it a sham that has “rented out the once good name of the Arizona State Senate to grifters and con-artists.” The supervisors were flanked at a press conference by various county officials, including Sheriff Paul Penzone, a Democrat, and Recorder Stephen Richer, a Republican who was recently elected the county’s chief elections officer.

Unprompted, Richer closed the press conference by tearing into Finchem, mocking the false conspiracy theories that voting machinery from the company Dominion Voting Systems was used to change election results.

“Why are you running if you do not believe in these elections?” he closed. “I would suggest that his actions speak a lot louder than his words.”

In a subsequent interview with POLITICO, Richer analogized it to “revealed preference,” an economics theory: “All these people, their true preferences and their true beliefs regarding the election system are more readily determined by their actions, which is to continue to run,” he said, suggesting that if people really thought it was rigged, they wouldn’t bother to run.

When asked whether he was considering a run for secretary of state in 2022, Richer quickly and flatly gave a one-word answer: “No.”

The most prominent candidate in the group is likely Hice, who is challenging Georgia Secretary of State Brad Raffensperger, a Republican whom Trump has repeatedly attacked for defending the 2020 election as free and fair.

In a recent letter circulated to conservatives in Georgia and obtained by The Atlanta Journal Constitution, Hice wrote that the election was full of “systemic voting irregularities and fraud,” and that he was running “to stop Democrats before they rig and ruin our democracy forever.”

He is running his campaign with Trump’s endorsement: “Jody will stop the Fraud and get honesty into our Elections!” Trump proclaimed the day Hice launched his campaign. Raffensperger is facing significant anger within his own party, but he recently reaffirmed that he would run again.

“The danger is you’re lying to either yourself or to millions of people when you try to run for these large, statewide elected offices,” Georgia Lt. Gov. Geoff Duncan, a Republican, said of the false electoral fraud claims.

Duncan, a vocal critic of Trump and other Republicans who push the election fraud myth, recently announced he would not seek reelection and instead focus on his “GOP 2.0” initiative. He said a fixation on it will only hurt Republicans in the long term.

“There is a vacuum of leadership, and folks wanting to put themselves into even higher leadership positions, continuing to carry on with the lies and misinformation, continues to create an even bigger vacuum around our party,” he said.