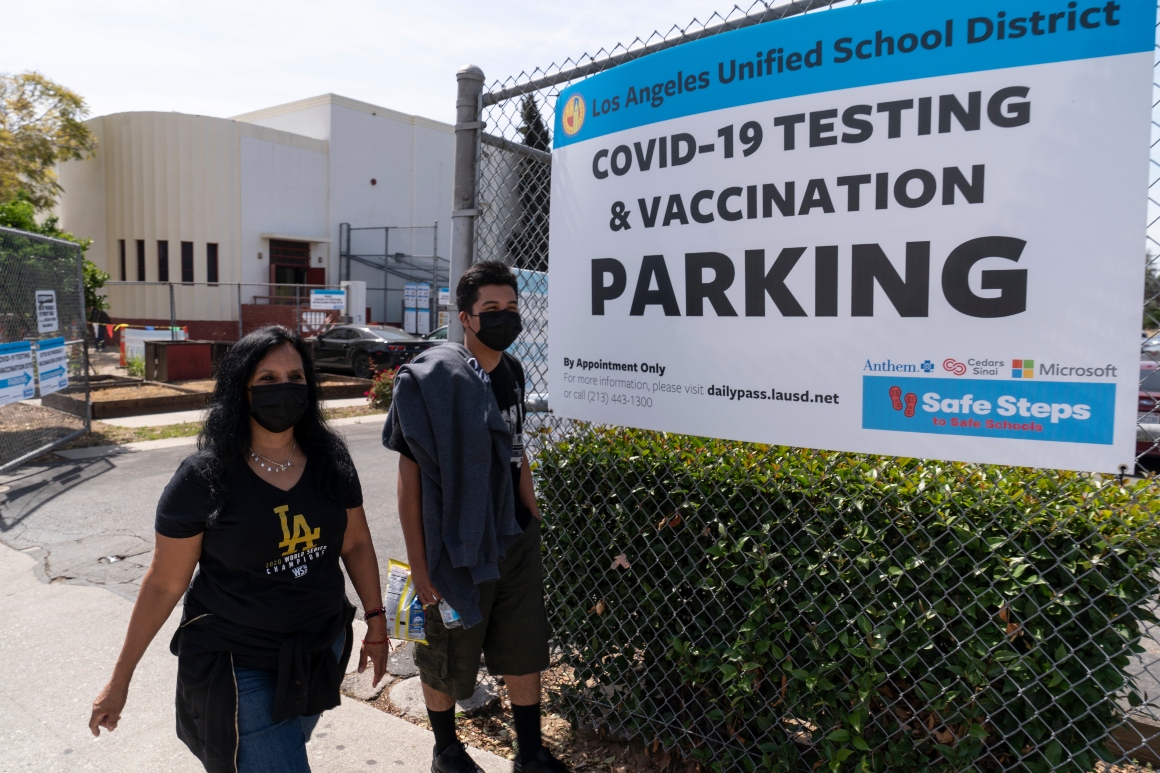 President Joe Biden took office pledging to help curb the pandemic by supporting regular Covid-19 testing in schools and other group settings like homeless shelters and workplaces — but the future of those multibillion-dollar plans is murky amid dramatic drops in infection rates nationwide.

The administration has struggled to launch a $650 million program it announced in February to set up regional Covid-19 testing hubs for schools and facilities like homeless shelters. Federal officials had hoped to have the first hub open and coordinating 150,000 tests per week by late April, but have not yet awarded any contracts.

And while the White House announced in March that it would spend $10 billion in stimulus money to support testing programs in schools across the country, planning has been left largely to states, cities and local school districts. The CDC began distributing the money to state and local health departments in early April, but it is not clear how much schools have spent in the waning months of the 2020-2021 school year.

Now, with vaccination slowing the virus’s spread, some schools are reopening without the kind of widespread Covid-19 screening that Biden once envisioned as crucial. Administration officials, many education leaders and some public health experts argue that testing will still be important for stemming outbreaks in schools into the next academic year, because Covid-19 shots are not yet available for kids under 12. But with new infections steadily dropping as the summer looms, a debate is brewing about what role widespread screening programs will play in a world where an increasing number of Americans are vaccinated.

Since Biden took office, more schools have returned to hybrid and in-person classes, but it remains unclear what percentage of school districts across the country are regularly screening students and teachers for Covid-19. An Education Department spokesperson said the department is “not tracking that level of detail.” A Centers for Disease Control and Prevention spokesperson said that “most states have offered or implemented testing programs in schools during the 2020-2021 school year,” adding that a survey conducted by the publication EdWeek in February found that just 16 percent of school district leaders said they were testing students.

Education and health groups — including the Association of State and Territorial Health Officials, the Rockefeller Foundation and American Federation of Teachers — also said they do not have comprehensive nationwide data on how many districts have testing programs in place.

School districts in Chicago, New York City, Baltimore and San Antonio are among those that have implemented Covid-19 testing programs as part of efforts to bring students back to the classroom.

The district tests K-8 students weekly using PCR pooling, in which samples from about a dozen kids are tested as a unit using lab-based techniques; high schoolers take individual saliva-based PCR tests. Much of the funding for the testing programs has come from a mix of state and federal money, but the district is hopeful that it will be able to draw from Biden’s $10 billion school testing pot retroactively and moving forward.

“We have every intention of continuing testing through the summer. We are running extended summer school programming this year,” Hirsch said. The district is prepared to continue testing in the fall, but will adjust its strategy depending on community conditions and vaccination uptake among young people.

Jennifer Nuzzo, the lead epidemiologist for the Johns Hopkins Covid-19 Testing Insights Initiative, questioned if massive school screening programs will be valuable in the fall if virus spread is at low levels. Increasingly widespread vaccinations and warmer weather have helped drive down the average number of new Covid-19 cases each day nationwide from roughly 193,000 on Inauguration Day to just under 28,000 on May 19, according to CDC data.

“If we are going to talk about testing in the fall, it should be about antigen testing, because that will better hedge against those concerns that I have about the positive predictive value of tests,” Nuzzo said. “They’re not going to pick up as many of those positives that we don’t care about.”

Recent research suggests antigen tests — that are generally used at the point-of-care and can return results in minutes without sending samples to a lab — are effective at detecting people when they are at peak infectiousness. Lab-based PCR tests that are more sensitive may pick up the remains of an infection after a person is no longer contagious.

But others are more cautious, in part because of the lower vaccination rates among younger Americans, the potential for new coronavirus variants to emerge and the risk of a resurgence of cases when cold weather drives people indoors. Nationwide, fewer than 40 percent of Americans are currently fully vaccinated against Covid-19 and new vaccinations are slowing.

“I would strongly advocate communities to continue to maintain their robust testing capacity going forward,” said Jeffrey Duchin, a Seattle public health officer and a member of the Infectious Diseases Society of America’s board of directors. “We don’t know what’s going to happen in the fall. The Covid-19 outbreak is not by any means over: There’s still significant uncertainty and there is still significant disease activity.”

Mara Aspinall, who advises the Rockefeller Foundation on Covid-19 testing, said the key at this point in the pandemic is to ensure new outbreaks don’t occur. She agreed with Fauci that the frequency of testing can be reduced for most people who are vaccinated, but said screening programs are still needed in some situations.

“Now is the wrong time — and it is premature — to eliminate testing in many areas, including schools and workplaces where there is frequent contact with the public or high risk individuals,” Aspinall said.

Toni Thompson, associate superintendent of human resources for the San Antonio Independent School District, said her employer wants to continue to conduct weekly testing in the fall in part because vaccine uptake among adolescents will vary and no vaccine is yet authorized for students younger than 12.

“We feel that that’s one of the main ways that we’ve been able to mitigate the risk, by quickly identifying asymptomatic individuals — whether the students or staff members — and isolating them and conducting contact tracing,” Thompson said.

White House Covid-19 testing coordinator Carole Johnson told POLITICO the Biden administration is aware that states’ and local school districts’ progress in setting up testing programs with the $10 billion in stimulus money varies. She said the CDC is working to provide technical assistance and outreach to help states plan testing regimes so schools are ready in the fall.

The Biden administration also is still working through the contracting process for the regional coordinating hubs, which Johnson hopes will help schools that may not have experience or the capacity to set up testing on their own. Johnson said the government was “surprised by the significant amount of interest” by groups looking to run the coordinating hubs, which “always makes things complicated to do rapidly.”

“There are under-resourced schools or places where even with best efforts, it’s harder to stand up testing,” Johnson said. “As much support as we can give to schools, we want to get to schools.”

That work could prove critical for communities where vaccination uptake is slower and pockets of Covid-19 infections remain stubbornly high. The share of people who have received at least one shot ranges from 66 percent in Vermont to 33 percent in Mississippi. The agency’s recent guidance for K-12 schools says testing strategies “should be part of a comprehensive prevention approach” that also includes other mitigation measures like masking and physical distancing.

One question for backers of school testing is whether attitudes toward the screening programs vary as much nationwide as vaccine uptake or willingness to wear masks.

“There certainly are regional differences in terms of how testing is received, what the concerns of teachers and families are,” said Mike Magee, the CEO of Chiefs For Change, an education nonprofit.

Nationally, testing is beginning to slow as the pandemic recedes, but experts believe many point-of-care and at-home tests are not being reported to public health authorities. CVS and Walgreens executives say demand for in-store testing has stayed relatively consistent even during the vaccine rollout.

An even as more Americans are inoculated, testing — including school screening programs — may help enable contact tracing to be a tool that more closely resembles what was envisioned during the early days of the pandemic, according to Kelly Wroblewski, director of infectious disease programs at the Association of Public Health Laboratories.

“I think we have an opportunity now to really focus on the cases and the outbreaks that do emerge and do the public health interventions in place to stop spread early,” Wroblewski said.

But high schools in particular may have to adjust their screening protocols as more teens become vaccinated heading into the fall. CDC now recommends that fully vaccinated people “refrain from routine screening testing if feasible” and suggests they generally not seek out testing or quarantine following a known exposure with an infected person. If a fully vaccinated individual experiences Covid-19 symptoms, they should still seek out a test, the agency’s guidelines state.

The recent experience of the New York Yankees illustrates the complexities involved in interpreting routine tests of vaccinated people. The ball club said last week that it had detected nine cases of Covid-19 among vaccinated players and coaches; the vast majority were asymptomatic, and the remainder were mild. Public health experts say the cases demonstrate Covid-19 vaccines’ power to prevent severe illness.

As more school-age kids get vaccinated, any school testing programs will have to adapt to the possibility of asymptomatic infections that don’t warrant disrupting in-person learning.

In any case, school screening could have broader advantages for communities, by serving as an early-warning system for any virus variants that could pose a threat to the elderly, said Michael Mina, a professor of epidemiology and immunology at Harvard T.H. Chan School of Public Health. Older Americans were among the first to be vaccinated, and it is not yet clear how long the shots protect against infection.

“Something that has to enter into the equation is that many elderly will likely become susceptible again,” Mina said. “Elderly don’t immunize too well and do not retain immunity as well as younger people. So, as far as surveillance and testing is concerned — we should continue monitoring and testing in nursing homes and senior centers — especially when cases are ticking up again or prevalent in a community.”

Others are skeptical of the benefit of continuing widespread asymptomatic testing of vaccinated people in the fall, in part because the predictive value of screening decreases when the level of infection in a community falls.

“At some point, we do have to shift to thinking about this disease as ‘Is it putting anybody in the hospital? Is it killing anybody? If not, then how much are we caring about it?’” Nuzzo said.

Work is still underway at the federal and local level to ensure schools are fully ready to test students in the fall to prevent spread of a disease that has already claimed the lives of more than 585,000 people in the U.S.

“Testing is an essential part of our national strategy,” Johnson said. “The president has made it a priority.”

Back in San Antonio, Thompson hopes continued diligence, vaccinations and testing will help ensure hard fought progress against the virus is not lost when students return to classrooms.

“If we think that this is completely over with, I think we’re fooling ourselves,” she said. “We just don’t want to have other spikes because folks are too cavalier about it. We still want people to be at least thoughtful and appropriately cautious and to do what they need to make sure they’re safe, and others around them are safe.”