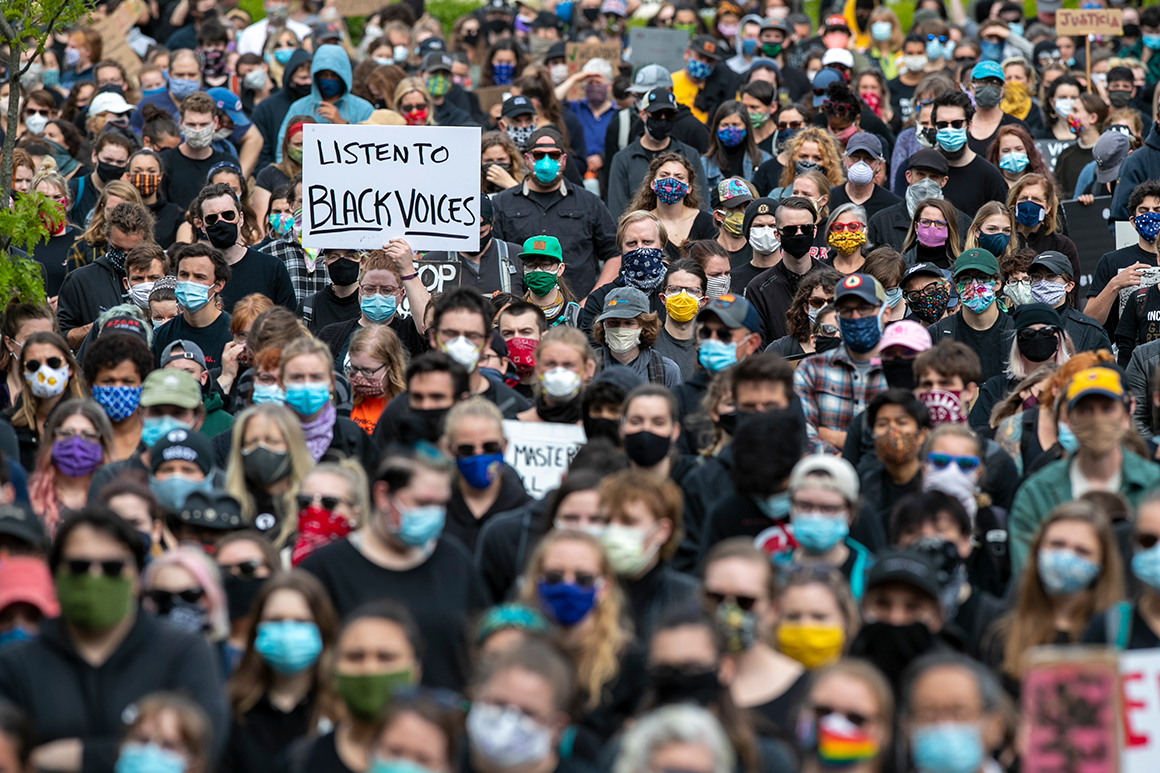 One year after the death of George Floyd, there is widespread recognition that America’s national reckoning on race still has a long way to go. But another thing is becoming clear: data suggests public opinion on racial justice issues has changed dramatically, powering a sustained and historically significant wave of activism among white Americans.

It’s a development with wide-ranging political and policy implications, creating the conditions for rethinking approaches to policing, criminal justice, housing and health care disparities, to name a few. President Joe Biden’s unprecedented acknowledgment of — and frequent references to — systemic racism is but one reflection of the altered dynamics.

On highly politicized and polarizing issues, even a 1- or 2-percentage-point change can be notable, said Drew Linzer, director at Civiqs, the polling firm co-founded by the liberal blog DailyKos. 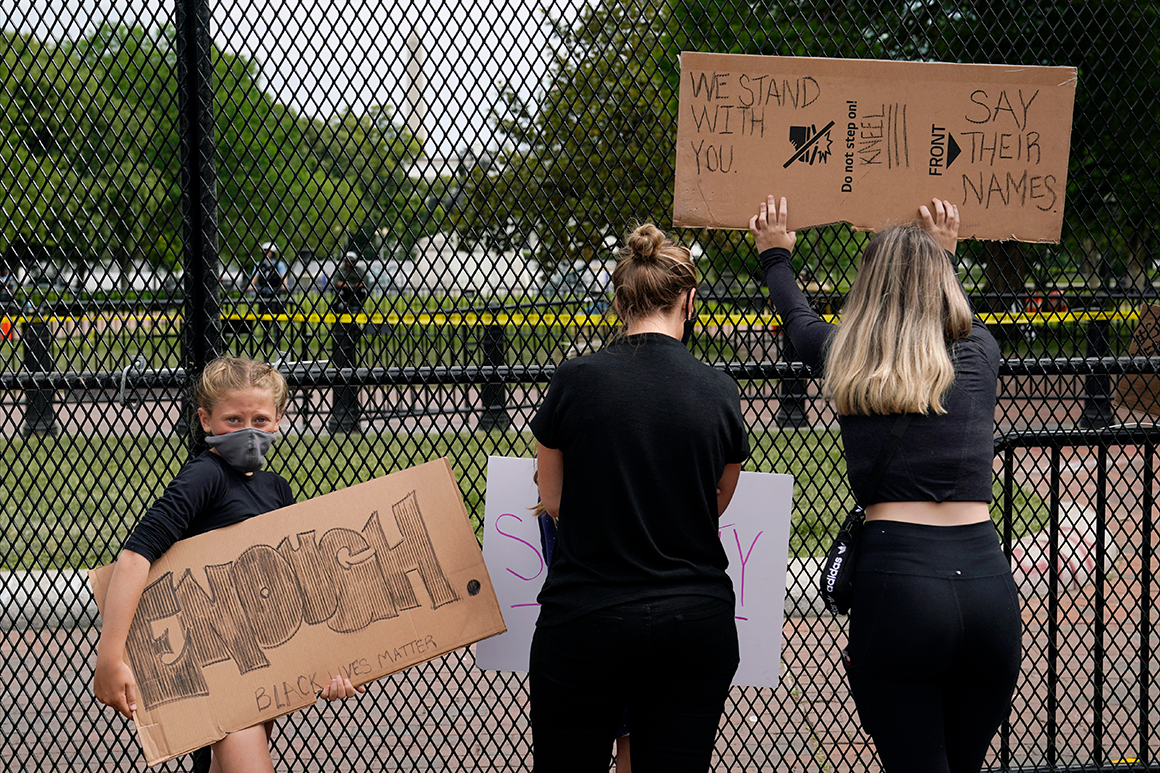 “I would call this a big shift,” Linzer said, adding that changes in opinion like this are “really unusual.”

The question, however, is whether this change in public opinion is fleeting or a sign of a new state of racial consciousness among white Americans. Researchers have warned about the need for caution in declaring decisive victories.

“We’ve had other watershed moments, but American racism seems to be very hard to eradicate,” said Doug McAdam, a professor at Stanford University who has studied American racial politics since the 1970s.

Judy Weston, a 69-year-old retiree from Massachusetts, is one of the white Americans who had their perspectives change, spurring long-term action.

“For me, it was because it was so graphic, it was so blatant,” she said of the video of Floyd’s death. “You couldn’t get it out of your mind, you know?”

Weston’s reaction, which included attending protests, volunteering and taking part in educational webinars on race in the U.S., resulted in a personal epiphany.

Though she was a high school student who watched her classes integrate through busing in the 1960s, she never learned about the history of racism in America. Nothing awakened her to the racism around her as much as Floyd’s death and the activism that followed, she says.

“We never learned anything about any of this in school. So it is time to really teach everybody about what’s going on, what has gone on,” Weston said.

The sustained change in opinion was also evident in a Washington Post-ABC News poll released last month, which found that, even nearly a year after Floyd’s death, 53 percent of white Americans believe more needs to be done to hold police accountable. In 2020, a majority of whites said they believe the justice system is unfair to Black people for the first time in the poll’s history.

It’s not just white Americans who have changed their minds about race over the past year. Support for BLM increased about 10 percentage points among all demographic groups since 2017, with about half of that increase happening since Floyd’s death. Across the board, the shifts have largely been sustained, Linzer said.

Floyd’s death and the protests that followed did more than just change the opinions of many white Americans. Protests for racial justice also picked up more white participants than before, according to researchers, creating a far more diverse group of protesters.

“That’s just stunning. That’s unprecedented,” McAdam said. “Typically, those protests don’t produce a sort of sea change, but this one did … it does feel kind of, potentially, like a watershed.” 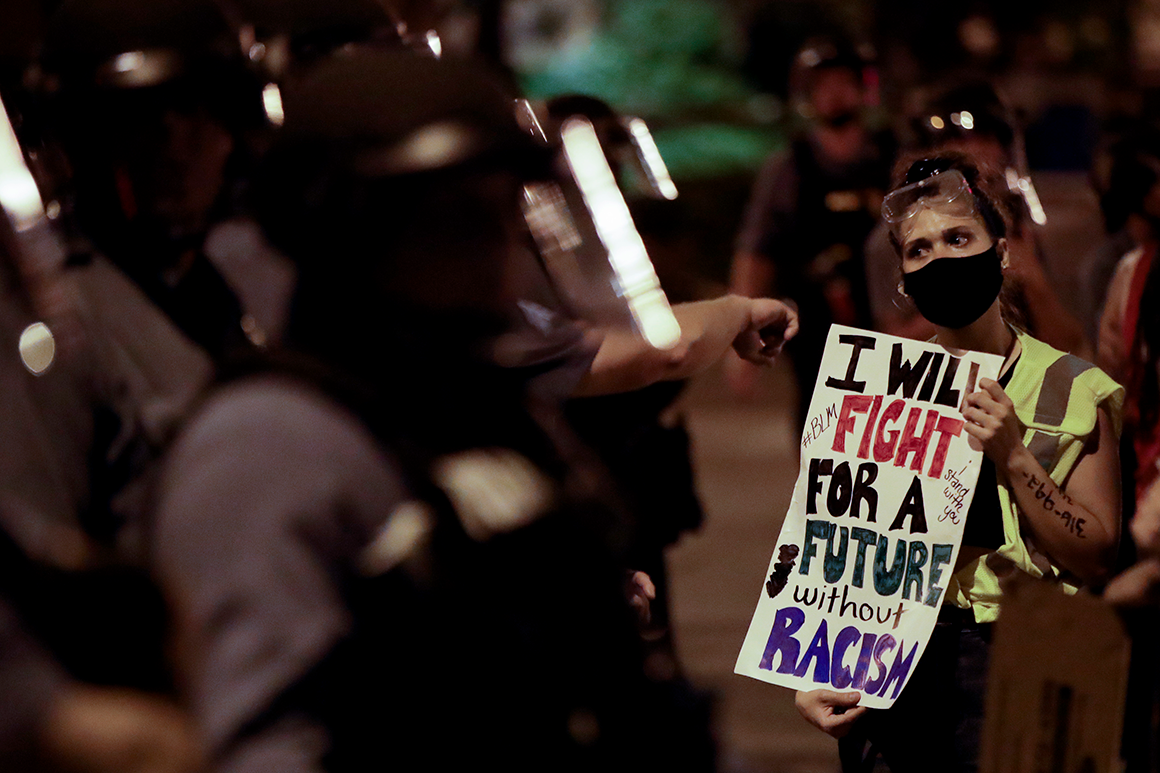 Dana Fisher, a professor at the University of Maryland who studied protests in the Trump era, said a structure of resistance protesters was already formed, and the events of the summer caused those structures to join the BLM movement.

Protesters who were new to the movement — often white Democrats — were already organized and mobilized in a way unique to the Trump era, she said.

“This couldn’t have happened in the civil rights period,” Fisher said.

In follow-up surveys, many protesters remained politically active. In the Women’s March in Washington, held in October, protesters rated concerns about police brutality and support for BLM nearly equally with reproductive rights. Racial justice was a more important issue to those surveyed than removing Trump from office.

As BLM protests started spreading across the country after the video of Floyd’s death went viral, opposition to the movement also grew, according to the Civiqs data. It’s impossible to know exactly why, but Linzer said some media coverage of the protests could have resulted in a growing opposition.

Fox News, for example, used the words “violence” and “violent” in July and August 2020 more than at any other time in the past 10 years, according to a cable news analyzer created by Stanford University that aggregates transcripts from cable news.

Some activists are skeptical of the idea that Floyd’s death and the activism that followed pushed white Americans toward justice.

At Green Street United Methodist Church in Winston-Salem, N.C., where anti-racism programs have been an active part of the mostly white congregation for over a decade, the long-term participation and attitudes in the surrounding town are not so clear.

“There’s one thing to show up and rally or to share a meme on your Facebook page,” said Amaris Carr, who has worked with the anti-racist team since 2007. “There’s another thing to say: ‘I want to get behind this particular policy; I want us to talk about this other particular policy because I’m standing in solidarity with the people who are marginalized and oppressed.”

There is also some doubt about whether the data on growth in support for BLM is reliable only a year after Floyd was killed — some researchers say it will take several more years of data to understand the impact of the past year.

Does Alexis Braly James, a diversity consultant working to promote racial justice since 2009, think the summer of 2020 was a watershed moment? 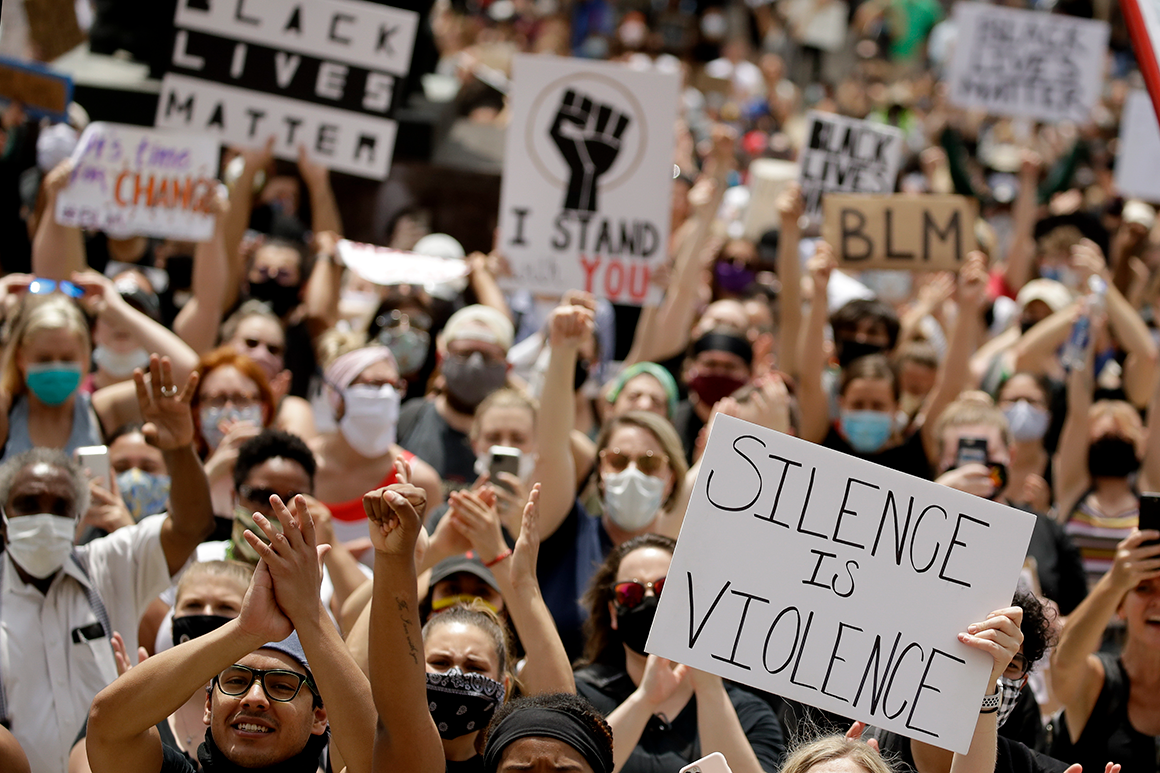 James, who is Black and biracial, has been navigating discussions of race in white and Black circles her whole life. While she acknowledged it can take a long time to really understand the significance of a movement, she said she has seen immediate, sustained changes.

“There is still obviously a lot of room to grow, but when you see companies like Starbucks, Intel, Nike, Adidas really investing dollars in Black mentorship in order to mentor junior executives into senior executives, I think that will have a lasting outcome, as long as that energy is sustained,” she said.

James has seen a 200 to 300 percent increase in inquiries for the diversity consulting and training from her company, Construct the Present. She’s not the only one.

“I did more of those [corporate diversity trainings] in the last 12 months than I did in the last 23 years,” said Tim Wise, a white anti-racism educator.

Wise said he was skeptical of how long some white people would stay in racial justice work, but he believes the moment represents an important shift for the country.

Wise and James also agreed that it could take years to see the activism change standing policies that uphold systems of oppression. Still, they’re optimistic about the shift over the past year.

“That is a bigger movement on that than we’ve had in the last 20 years,” Wise said. “We’re not going to go back to the before.”

James is even more hopeful for the future.

“I have heard more white folks ever in my life talking about how they’re having conversations with their own children and family members about race,” she said. “A lot of what I’m doing — we may not see the impact in my lifetime.”

Wise also noted the importance of educating the next generation as an outcome of the movement for racial justice.

“You can get people in the streets — the question is if you can get them to raise their kids differently,” he said. “I do suspect that a lot of the younger people who have come in will stay connected to the larger social justice umbrella over their lives.”

People who participated in BLM protests tended to be young, and polling data for younger voters suggests that support for BLM and similar racial justice initiatives will continue to rise over decades. Among white voters aged 18-34, support for the movement significantly outweighs opposition — the opposite of other white age groups, who mostly oppose the movement.

James thinks the next generation of voters may bring the country closer to justice.

“I really do think the kids and the young people are the way we end this,” she said.