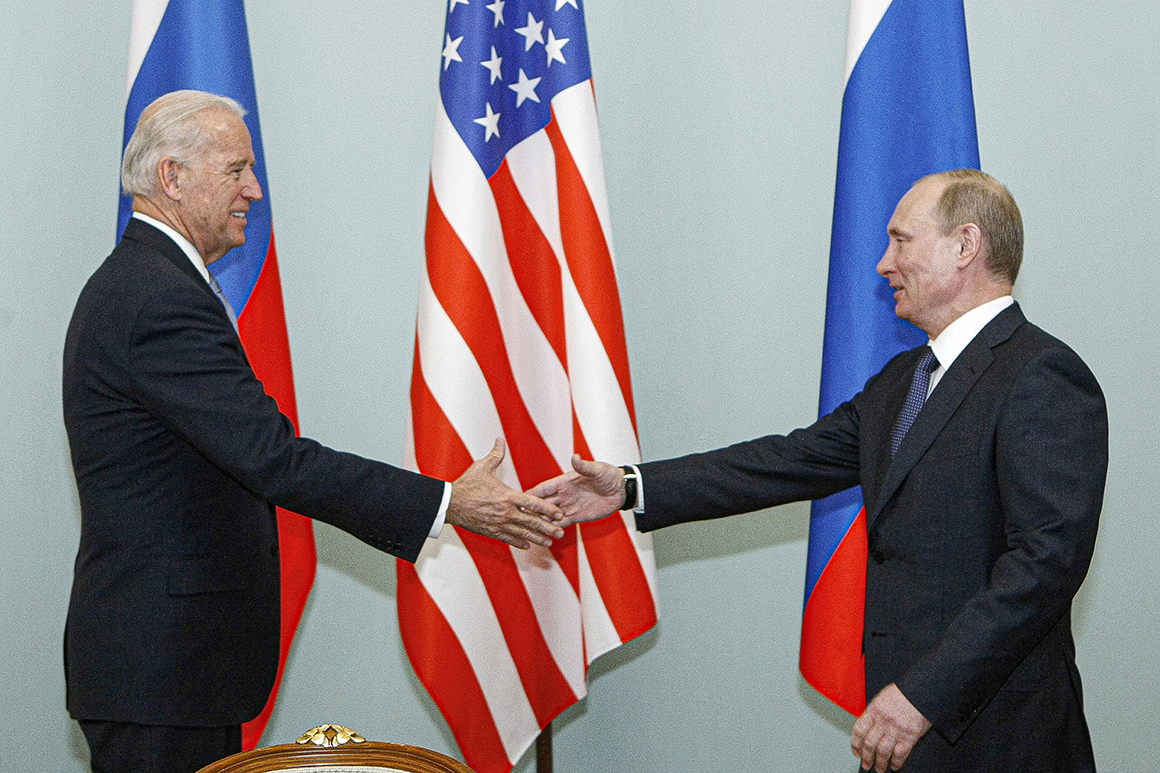 It’s been a decade since Joe Biden last met Vladimir Putin face-to-face, and the U.S.-Russian relationship is in far worse shape as they prepare to meet again Wednesday. The areas of dispute are numerous and growing, from cybercrime to election interference to Belarus’s abduction of a journalist.

Still, the men — who oversee the world’s two biggest nuclear arsenals — agree that giving each other the silent treatment isn’t an option. Wednesday’s meeting is a chance to lay out each side’s intentions and red lines, and maybe, just maybe, show some willingness to cooperate on some areas.

This is not the type of gathering where success can be declared or denied immediately, and we’re told not to expect any major agreements. We may not know for years if it was even a meaningful exercise. Just in case, though, here are a few key things to keep an eye on:

Will the two men face off like boxers ahead of a match? Will Biden stare into Putin’s eyes to see if he can find a soul this time? Will Putin tear off his shirt? Will there be smiles and elbow bumps and general bonhomie? Or will there be lectures and jaw-clenching?

Granted, most of the meeting will be behind closed doors, and that’s where most of the policy substance will get hashed out, even if no deals emerge. But that makes the limited time Biden and Putin have before the cameras even more important. How each chooses to use those moments will send a big signal, including to their domestic audiences, about how he intends to approach the other in the coming years.

We’ve seen some of this drama already in the Biden era. When Secretary of State Antony Blinken and national security adviser Jake Sullivan met with their Chinese counterparts in Alaska, the public session included a shocking amount of verbal jousting. But when Blinken met with Russian Foreign Minister Sergey Lavrov, both sides were cordial and careful before the cameras. Which route will Biden and Putin take?

The Biden administration has settled on the phrase “stable and predictable” to describe what it seeks from the Kremlin.

But what does that really mean? And even if Putin is inclined to say he seeks the same thing, will he define it the same way? After all, to him, “predictable” may include predictably being a thorn in America’s side. Also, isn’t it sort of a low bar? After all, who doesn’t want a stable and predictable relationship so long as it benefits them?

Watch a) how often this phrase is used and b) whether Biden and his top aides define predictable stability in any serious fashion, c) whether Putin and his team try to put their own spin on it, and d) whether its usage survives beyond Wednesday’s summit.

Would you like a list of all the issues Russia and the United States are at loggerheads over? Do you have all day?

Quite seriously, here’s a bunch (but not all) of the topics possibly on the table: Russian interference in U.S. elections; the war in Ukraine; the poisoning and imprisonment of Russian opposition leader Alexey Navalny; cybersecurity and cybercrime; the behavior of Belarus’ dictator; humanitarian access in Syria; the future of Afghanistan; North Korea and Iran’s nuclear programs; the Nord Stream 2 pipeline; global corruption; Americans detained in Russia; the rise of China; and restrictions on diplomats imposed by both sides.

At the same time, the Biden administration has pointed to some areas where the two countries could possibly cooperate. Those include battling climate change and pandemics. They may also include future development of the Arctic region. There are whispers of potential prisoner swaps to free detained Americans. And perhaps some ways to soften the blows to diplomatic staffing resulting from expulsions and sanctions over the past few months. Above all, the Biden team hopes to get Russia to at least warm to the idea of more agreements and safeguards when it comes to the two countries’ nuclear arsenals.

Either way, watch how both Putin and Biden discuss the topics afterward and which ones they appear to prioritize. If they talk about the same topics in the same general order, that could be a sign that at least the two agree on prioritization, even if they don’t agree on resolutions. Ultimately, what matters most may be that the two sides agree to keep open the lines of communication, not necessarily to send each other good wishes but to have a way to avoid misunderstandings, especially when it comes to their nuclear postures.

It’s easy to watch how the Biden administration will cast the summit once it’s over, and not just because it will use everything from press releases to news conferences to get its views across. Watch in particular for what unnamed senior administration officials leak to reporters about the private portion of the meeting and their comments on Putin. If there’s a general reticence to say much about the Russian autocrat, it could mean some progress was made and the White House doesn’t want to derail it.

Putin has plenty of ways to get his feelings across. Not only can he hold his own press conferences, but he also controls a significant chunk of Russian media. Watch the ebb and flow of Russian media pieces on the United States and Biden especially in the coming days. A spike in negative stories could suggest the summit did little to ease tensions, though it could also mean Putin wants to assure his domestic audience that he is standing up to America and leading Russia on the proper path.

It could be years before we truly know whether the Biden-Putin summit was a success or even worth having. In the more immediate future, it’s worth watching a few things to gauge the temperature.

First, the ongoing Iran nuclear talks: Does Russia suddenly move to derail the already difficult discussions about bringing the United States and Iran back into compliance with the 2015 nuclear deal? This is unlikely — Moscow is fairly consistent about not wanting Iran to have a nuclear arsenal — but you can’t rule anything out with Putin.

Second, what will Russia and China do together in the near future? They have a growing relationship that worries the Biden team, and sometimes they hype it to needle Washington. Just after the U.S.-China meeting in Alaska, for instance, Chinese officials met up with Russia’s Lavrov, who used the occasion to call for less reliance on the U.S. dollar.

Third, will the United States impose more sanctions on Russia? Some Russian opposition activists hope Biden will go after corrupt Putin cronies, and Biden has emphasized his desire to battle global corruption, calling it a threat to democracy. Does he bring down the hammer on Putin’s friends, or hold off in hopes of progress, or at least stability, in U.S.-Russian relations?

In the words of a certain former U.S. president Putin recently praised and probably misses a lot right now, “We’ll see what happens.”