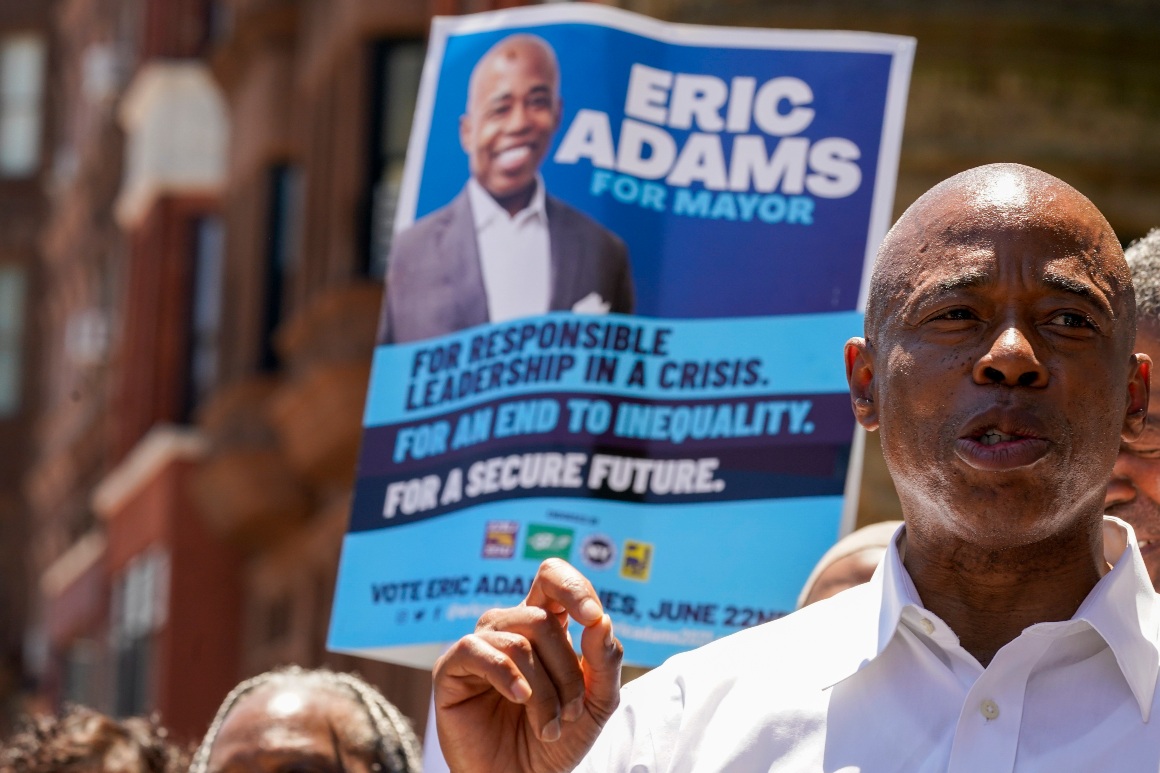 NEW YORK — Leading mayoral candidate Eric Adams continued to suggest Monday that the alliance between rivals Kathryn Garcia and Andrew Yang is designed to suppress the vote of Black New Yorkers — obliquely referencing poll taxes that were once used to prevent Black voters from getting to the ballot box.

On Saturday, Garcia and Yang teamed up for the frenetic get-out-the-vote phase of the campaign as the field sprints toward the finish line. For the first time, New Yorkers will be able to pick up to five candidates in order of preference as part of the new ranked-choice voting system.

Adams repeated Monday that his competitors were tone deaf for beginning their alliance on Juneteenth, a commemoration of the end of slavery that was recently made a federal holiday.

“African Americans are very clear on voter suppression. We know about the poll tax. We know about the fight we’ve had historically, how you had to go through hurdles to vote,” Adams said. “So if [my supporters] feel based on their perception that it suppresses the vote, then I respect their feeling and it’s not for me to interpret their feelings.”

Yet it was Adams’ own campaign that issued a series of critical statements from his surrogates, who said the duo’s strategy amounts to suppressing the Black vote. Ashley Sharpton, daughter of the Rev. Al Sharpton, for example, said in a statement issued by the Adams camp that the alliance was “a cynical attempt by Garcia and Yang to disenfranchise Black voters. We didn’t march in the streets all summer last year and organize for generations just so that some rich businessman and bureaucrat who don’t relate to the masses can steal the election from us. Disgusting.”

Tag-team operations like the one forming between Yang and Garcia have happened in other cities with a ranked-choice system, which encourages candidates to seek out voters who might not necessarily pick them first but could rank them further down. In this case, the matchup appears designed to deny Adams as many second-place votes as possible.

But Adams remains favored to win in almost all of the recent surveys conducted in the race. A new Ipsos poll out Monday shows him coming in first on first-choice ballots with 28 percent, followed by Yang at 20 percent, Garcia at 15 percent and Maya Wiley at 13 percent. Adams also wins in that model after seven rounds of ranked-choice voting.

Yang addressed the Adams team’s comments at a campaign stop in Bensonhurst earlier on Monday.

“It’s hard to characterize people getting out the vote as anything other than positive,” he said. “We need people to make their voices heard. We need people to express their preferences for more than one candidate. And so I have a hard time seeing where he’s coming from. I will say that the last thing New York City needs is a mayor who uses race baiting any time he is criticized.”

Adams said Monday that other Black candidates in the race also felt the Juneteenth rollout sent the wrong message. But Wiley, who would be the first Black woman elected mayor, defended her rivals and chastised Adams for putting the alliance in racial terms.

“This partnership is not racist and we should not be using this term so loosely against other candidates at the end of a long campaign when New Yorkers are all coming together to make important choices about our collective future,” she said in a statement. “These accusations are a weaponization of real fears and concerns about our democracy, and have no place here.”

A good-government group that pushed for ranked-choice voting to be approved at the ballot box in 2019 released a statement in response to the criticisms from Adams supporters.

“There is nothing insidious or cynical about two candidates transparently using a legitimate strategy in a democratically approved system of election,” said Susan Lerner, head of Common Cause New York. “Campaigning together, as Mr. Yang and Ms. Garcia are doing, is standard practice in places like San Francisco and Minneapolis both of which have ranked choice voting and elected their first Black woman Mayor and several Black transgender candidates to the City Council, respectively.”

On Monday, Adams also blasted the Board of Elections for opting to release voters’ first-choice results the evening of the primary while waiting weeks to tabulate the winner. No candidate is expected to crack the 50 percent threshold, and the combination of waiting for absentee ballots and using the new ranked-choice system means that the actual winner won’t likely be known until mid-July.