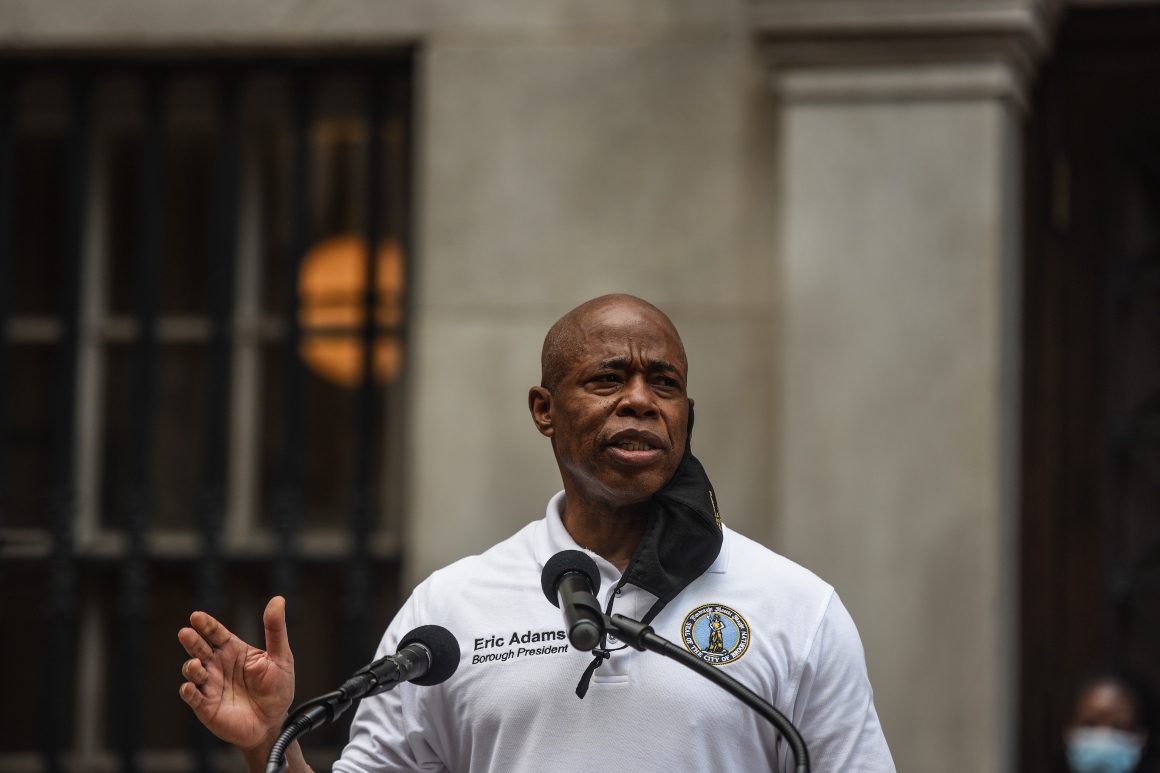 NEW YORK — Eric Adams barely held onto his lead in New York City’s Democratic mayoral primary after voters’ lower-ranked candidates were accounted for on Tuesday — but the results were immediately called into question after a major discrepancy in the vote totals.

Hours after releasing results that showed Kathryn Garcia leapfrogging second-place finisher Maya Wiley to come within striking distance of Adams, the city Board of Elections issued a confusing statement that acknowledged problems with the results, but neither explained the problem, took any responsibility for it nor answered any follow-up questions.

“We are aware there is a discrepancy in the unofficial RCV [ranked-choice voting] round by round elimination report. We are working with our RCV technical staff to identify where the discrepancy occurred. We ask the public, elected officials and candidates to have patience,” the board tweeted from its official Twitter handle at 6:20 p.m., just three hours after publishing results that could change the course of the election.

It was a messy episode in the first citywide test of ranked-choice voting — a system that allows for the ranking of up to five candidates in order of preference and kicks in when no one secures 50 percent of the vote.

On Election Day last Tuesday, Adams dominated the race with 31.6 percent of the vote, followed by Wiley at 22.2 percent and Garcia at 19.5 percent.

That gap narrowed considerably once ranked ballots were tabulated, with Adams outpacing Kathryn Garcia by only 2.2 points, according to results released Tuesday afternoon. The board calculated ranked ballots for 11 rounds before Adams squeaked past the necessary 50-percent threshold to attain 51.1 percent to Garcia’s 48.9 percent.

Wiley lasted 10 rounds, and her voters ended up boosting Garcia over Adams by a roughly 2-to-1 margin.

The race may now come down to a count of more than 120,000 absentee ballots that the Board of Elections was accepting through Tuesday.

Meanwhile, the board’s latest release counts 940,000 voters — an addition of more than 140,000 from Election Day. The discrepancy prompted questions from reporters and campaigns, which the error-prone board acknowledged without explaining the cause of the snafu.

The system allowed voters to pick up to five candidates in order of preference. Once a candidate is knocked off, their votes are spread out to the remaining hopefuls. The absentee ballots will be factored into another tabulation next Tuesday before the board releases a final certification by July 12.

But the Adams campaign issued a statement Tuesday afternoon calling into question the board’s results.

“We have asked the Board of Elections to explain such a massive increase and other irregularities before we comment on the Ranked Choice Voting projection,” he said in a statement. “We remain confident that Eric Adams will be the next mayor of New York because he put together a historic five-borough working class coalition of New Yorkers to make our city a safer, fairer, more affordable place.”

It is unclear when the elections board will release new numbers, but the mistake could call into question all of its tabulations if the race ends up being close.

“Once all the votes are counted, I know everyone will support the Democratic nominee and that’s exactly what I intend to do,” Garcia said in a statement. “We look forward to the final results. Democracy is worth waiting for.”

Adams, the Brooklyn borough president, secured just over 51 percent of the vote, up from the 31.7 percent he received in first-place votes when New Yorkers hit the polls last Tuesday, according to the initial results released by BOE.

Wiley, who finished in second place last week with 22.2 percent, fell to third before being eliminated in the rankings. She trailed Garcia by less than 1 point, however, meaning that the leaderboard could easily change once again when the paper ballots are opened. And with such tight margins, she did not concede.

“I said on election night, we must allow the democratic process to continue and count every vote so that New Yorkers have faith in our democracy and government,” she said in a statement.

Fourth place went to Andrew Yang — who had campaigned with Garcia in the days before last week’s primary and urged his supporters to rank her second.

That alliance may end up being decisive, if the overall direction of the race remains unchanged when the elections board recounts the ranked-choice tabulations.

When Yang was nixed in the tenth round, his votes boosted Garcia and Adams by roughly 6 points each. Wiley got just 3 points, if the percentages hold.

“If we don’t win but we help elect Kathryn Garcia, that’s a pretty good outcome,” Yang campaign co-manager Chris Coffey said of the candidate’s thinking when he joined the accord.