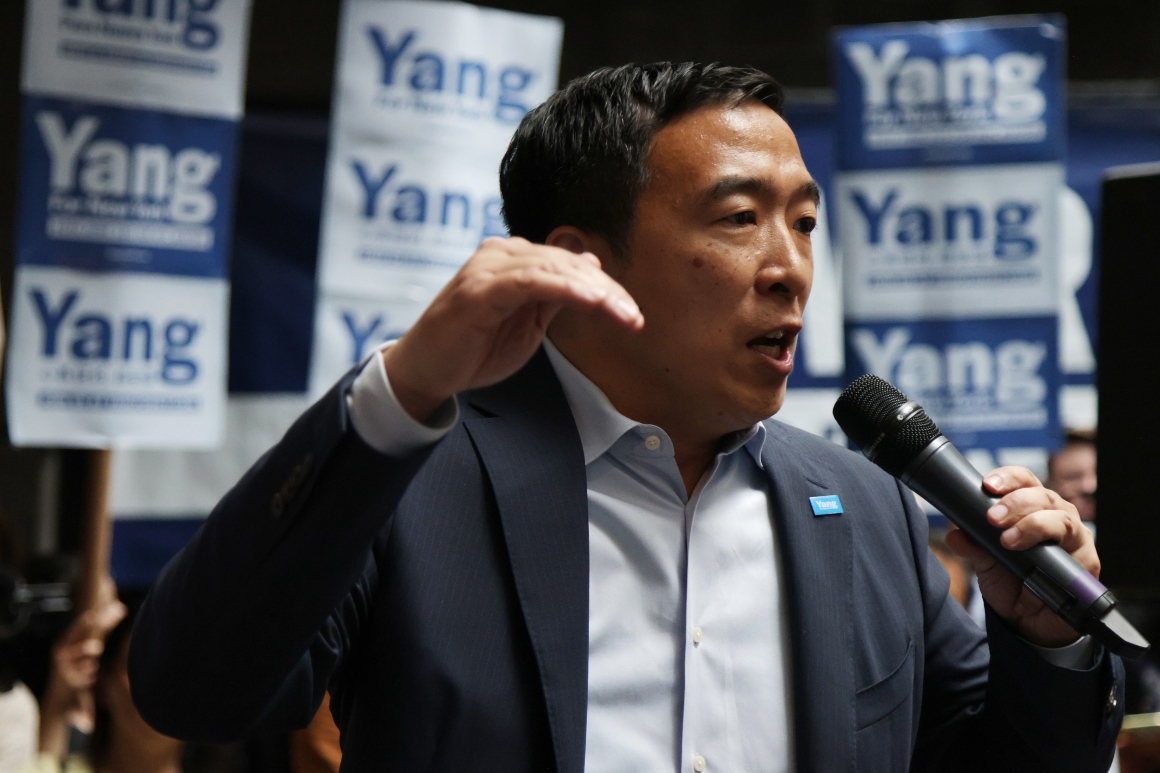 NEW YORK — New York City’s eight leading mayoral candidates will take the stage Wednesday night in the last debate of the primary — and with less than a week until election day, none can claim to be the undisputed front-runner.

But a few hope to be, by the end of the night.

The in-person debate, sponsored by POLITICO, WNBC and Telemundo 47, will feature eight Democrats facing off for the fourth and final time ahead of the June 22 primary. Kathryn Garcia and Maya Wiley have surged in recent polls. Andrew Yang lost his front-runner status weeks ago, though the enthusiasm around his candidacy remains strong.

Eric Adams, who has faced national scrutiny over the past week about his confusing living arrangements, remains the man to beat — and the likely target of heavy fire Wednesday night.

“I find it fascinating that people are saying that Eric is going to take a lot of body shots,” he told reporters Tuesday, referring to himself in the third person. “Let’s be clear about something: I was beat by police.” Adams’ hardscrabble background and history as a cop have been central themes throughout his campaign.

“I was shot at as a police officer. I was almost fired by the Police Department,” he said. “I have been written about, attacked, criticized. When I’m on that stage, that’s the easiest thing I’ve ever done in my life. Debating people? I sit there and I am so at peace.”

But Adams will not be alone in weathering attacks or delivering them. With early voting already underway, and a new ranked-choice system debuting for the first time in New York, the race remains highly fluid and could easily be upset before polls close.

“Nobody knows if this is a two-, three- or even four-person race — still,” said Eric Phillips, a political consultant and former press secretary to Mayor Bill de Blasio who is unaffiliated with any campaign. “Candidates won’t know who to train their collective fire on.”

The 7 p.m. debate, also co-sponsored by the Citizens Budget Commission and the New York Urban League, will air for the first hour on NBC 4 New York — the full two-hour debate will be streamed live on POLITICO’s website as well as WNBC’s.

A Marist poll released Monday — commissioned by POLITICO, WNBC and Telemundo 47 — showed Adams beating Garcia in 12 rounds of a ranked-choice model, where voters pick their top five candidates in order of preference on their ballots.

In first choice picks, Adams, the Brooklyn borough president, led the field with 24 percent of likely primary voters. He was followed by Garcia, the former city sanitation commissioner with 17. Wiley, an attorney and former counsel to Mayor Bill de Blasio, had 15 percent and Yang, the former presidential candidate, had 13 percent on the first ballot.

Another poll released this week had Garcia winning in a ranked-choice model and a third had Wiley as the first-ballot winner.

Wiley, within the last two weeks, consolidated the support of the party’s organized left-wing after winning the endorsement of Rep. Alexandria Ocasio-Cortez (D-N.Y.) and other progressive favorites, while Garcia surged from underdog status after getting the backing of the New York Times and New York Daily News. Yang was considered the front-runner for months, but has fallen behind in most recent surveys.

With early ballots already being cast, candidates must focus on the specific issues they want to address to sway the remaining undecided voters, said Jonathan Greenspun, a political consultant who worked on Mike Bloomberg’s mayoral campaign.

“You say you’re ready on day one? Great, what will you do on day one? You say you’re a fixer — what agency will you fix first and why?” Greenspun said. “Undecided has really been in the lead here since polling started and going on the attack is not going to convince voters to vote a certain way. … Debate three should be the information debate. It should be, what are you going to do?”

For the leading candidates, Wednesday night will be a chance to convince voters to rank them above their rivals — and failing that, second or third place.

And it will be a final shot for the lagging candidates to leave their mark. City Comptroller Scott Stringer was an early progressive favorite but lost much of his support after two sexual misconduct allegations. Another left-leaning candidate, Dianne Morales, saw her campaign implode amid a staff revolt. Former HUD Secretary Shaun Donovan and Wall Street exec Ray McGuire have lagged in most polls throughout their campaigns.

It’s the last of three official debates organized by the city’s Campaign Finance Board. Candidates also squared off in an unofficial CBS debate last week.

Public safety has been a dominant theme in the race amid a dramatic spike in shootings in the five boroughs. Adams in particular has made tackling that increase a centerpiece of his campaign, and has clashed repeatedly with Wiley, also a former MSNBC commentator whose platform includes cutting $1 billion from the NYPD.

“Some of the more conservative elements are coming at her. They’re dumping money into other campaigns. And she is undeterred in talking about the changes that need to happen in this city,” said Wiley campaign adviser Jon Paul Lupo.

Yang and Adams have also clashed in deeply personal terms, though their policy views are not dramatically different: both are running as moderates on policing, education and other issues. The Marist poll showed people picking Adams first were most likely to pick Yang second and vice versa.

“This is anyone’s race,” Yang told reporters Tuesday at a campaign stop.

“I can’t wait to talk to the people of New York again and hammer the message that I’m the mayor who is going to deliver real public safety for us and our families,” Yang said, touting his endorsement by the NYPD captains union — the union that Adams formerly belonged to.

Garcia plans to discuss her agenda for crime, public safety and police reform, according to her campaign, along with plugging her plans for free child care and affordable housing.

Stringer intends to argue that he is still the only candidate with the relevant political experience to push progressive policies through, his people said. He lost several endorsers on the left in the wake of the misconduct allegations, which he has denied. He plans to focus on his agenda for affordable housing, Wednesday night.

“We have progressive candidates in the race who don’t have the experience to be mayor and we have experienced candidates who aren’t progessive,” said Tyrone Stevens, Stringer’s press secretary. “Scott Stringer is the only one on the stage who offers both.”

A Manhattan Institute poll found Adams and Garcia neck and neck for the top spot, at 21 percent and 20 percent respectively — Garcia ultimately wins after 11 rounds of ranked-choice tabulation, per the model.

A Data for Progress poll found Adams in first with 26 percent and Wiley in second with 20 percent, followed by Yang at 16 percent and Garcia at 14 percent.

While the final debate is billed as a leading contenders match-up, the same slate of eight candidates were featured in previous debates. They had to qualify for public matching funds, which seven of the candidates did, or raise and spend $2.25 million, which allowed McGuire to qualify despite opting out of the public financing system.

Wiley and Garcia likely stand to gain the most from Wednesday’s debate after their stronger showings in recent polls, Greenspun said.

Tina Nguyen and David Giambusso contributed to this report.