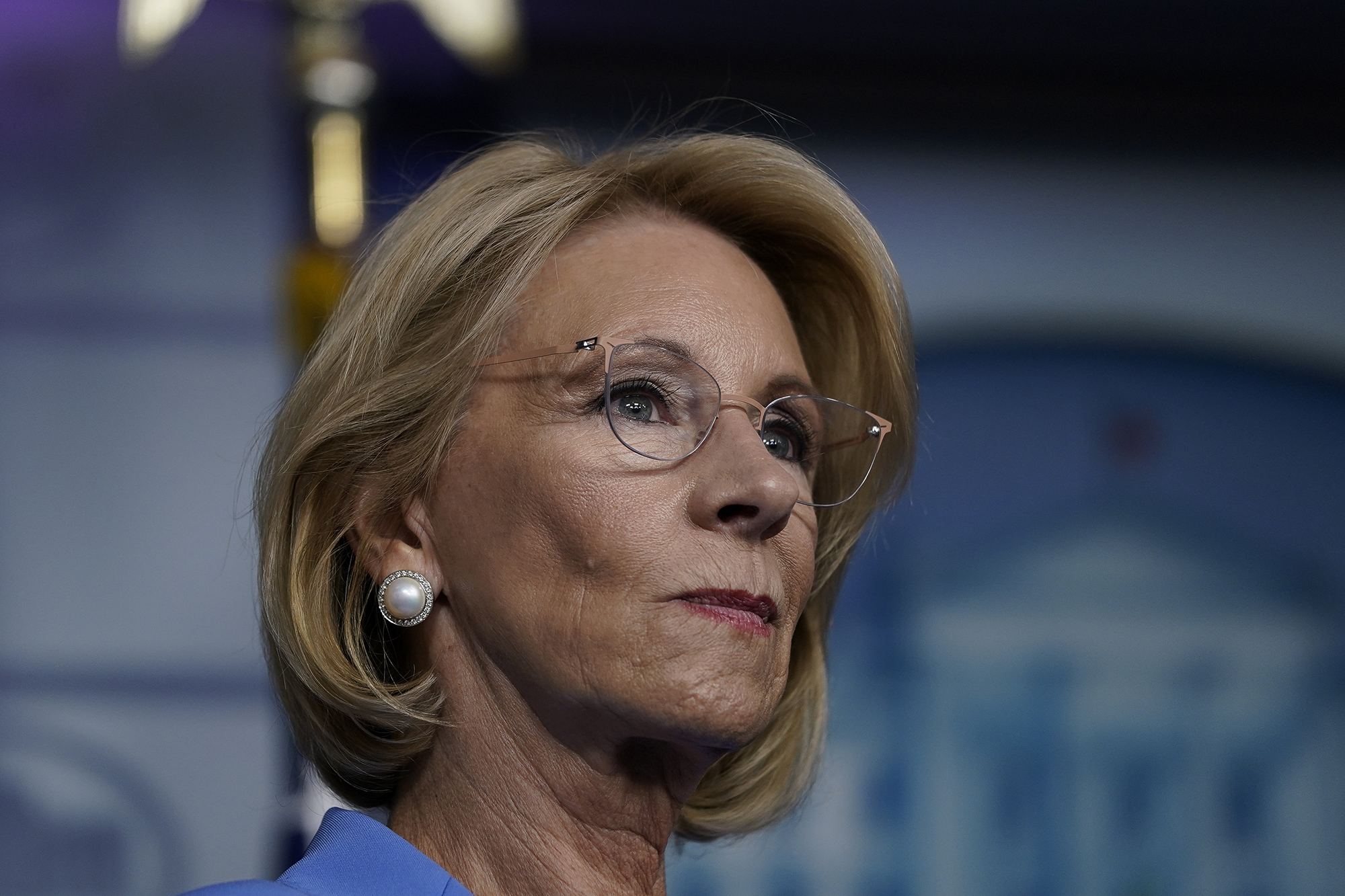 The Biden administration is trying to scrub Betsy DeVos’ policy fingerprints from the Education Department on everything from for-profit colleges to sex-based discrimination.

Standing in their way is an array of conservative politicians and advocacy groups eager to keep her policy agenda afloat after she has largely receded from public view.

DeVos’ devotion to using her government position to advocate for charter schools and those accused of sexual misconduct now relies on Republicans like Texas Attorney General Ken Paxton and Sen. Tim Scott (R-S.C.) to defend her turf.

The Education Department in June held a weeklong hearing to begin dismantling DeVos’ regulation on how schools must handle reports of sexual misconduct. It also made its mark on civics education by rejecting former President Donald Trump’s demands for promoting a rosier view of American history and “patriotic” education, by praising The New York Times Magazine’s 1619 Project, which Trump has called “toxic propaganda.” Talk of school choice, a topic that DeVos championed throughout her tenure, has also been placed on the back burner.

“It’s not a surprise that the Biden Education Department is doing precisely what they promised in the campaign, which is trying to undo just about everything that their predecessor did,” said Jeanne Allen, founder of the Center for Education Reform, which advocates for school choice.

Paxton is defending DeVos’ Title IX rule from a barrage of lawsuits, while Gov. Greg Abbott, a Republican, has signed a law creating the “1836 Project,” a reference to the year Texas declared independence from Mexico. Trump’s 1776 Commission, a panel he created after last summer’s civil unrest as a counterpoint to the 1619 Project’s emphasis on American slavery, is still meeting despite being disbanded by President Joe Biden in January. New parents groups are also pushing back on civics education that highlights systemic racism.

“Those of us who’ve worked through all different administrations appreciate when the states step up and take their rightful position, making sure parents are put ahead of bureaucracies,” Allen said.

Here are three policy areas where DeVos’ supporters are hoisting the biggest defenses:

The group has commended conservative states that have turned their attention toward developing “a genuine civics education that will rebuild our common bonds, our mutual friendship and our civic devotion.” The commission is still drawing up a curriculum designed in the “true spirit of 1776.”

Arnn’s group is also urging parents who believe in their cause to run for school board and vote in those elections.

“There is no more powerful force than parents’ love for their children, and this restoration will depend on mothers and fathers demanding that their children are no longer taught false narratives or fed hateful lies about our country,” the commission said.

At least one group of parents has rallied to the 1776 cause: Parents Defending Education.

The complaint is similar to an Education Department probe launched under DeVos into Princeton University last summer after the school’s president said students there face “systematic racism” and that racism is “embedded” in the structures of the university.

“Parents Defending Education’s work is nonpartisan,” the group said in a statement. “We oppose discrimination in America’s schools, period. If the Education Department adopts policies frustrating that ideal, we will continue to speak up, submit comments, and pursue the appropriate remedies to protect parents’ and students’ rights.”

Paxton, the Texas AG, has been trying to mount a legal defense of the Trump administration’s Title IX sexual misconduct rules, but last month a federal judge dismissed his request to intervene in a lawsuit. He argued in a brief that the Education Department’s latest Title IX review announced in April was a threat to the rule and that the Biden administration is “openly hostile to the Final Rule,” making the department unfit to defend the rule in court.

“The new administration has taken early steps towards the Final Rule’s repeal,” Paxton wrote. “In light of these actions, Texas cannot entrust the defense of its protectable interest to the Department.”

It’s unclear whether Texas will be able to intervene in the lawsuit.

Texas and other states are continuing DeVos’ efforts to bar transgender students from women’s sports teams and strip those students of discrimination protection under Title IX.

In 2017, DeVos revoked Obama-era guidance that protected transgender students under Title IX. Her agency later backed a high-profile lawsuit that threatened Connecticut’s sports authority and school boards with legal action or a loss of funding because it determined the transgender athlete policy violated Title IX.

Scott, a staunch supporter of school choice, made a strong case for the DeVos-era policy agenda item in his rebuttal to Biden’s first address to Congress in April.

“I’m saddened that millions of kids have lost a year of learning when they could not afford to lose a single day,” he said. “Our public schools should have reopened months ago. Other countries’ did. Private and religious schools did.”

A survey released by the American Federation for Children, which DeVos led before joining the Trump administration, in January found that 72 percent of K-12 parents who work full-time support school choice, and 79 percent support Education Freedom Scholarship legislation.

The freedom scholarship measure, a favorite of DeVos, aimed to provide federal tax credits for donations to scholarship-granting organizations to pay for students to attend private schools or expand their public education options.

School choice has not been a hot debate topic in Congress like it was when DeVos was in office. But Allen said it is by no means an indication that support for charter schools and choice are dwindling — even with the Education Department’s “negativity.”

“The efforts that are ongoing at the department are attempts to not just reduce program funding, but to try to put what I’d call poison pills in regulatory language and guidance — push Departments of Education to be harder on who gets approved and doesn’t,” she said in an interview, adding that “states have been adopting and expanding their own programs.”

This year West Virginia and Iowa have moved to allow charter school expansion in their states. Other states like Tennessee are also looking to bolster their charter schools programs.