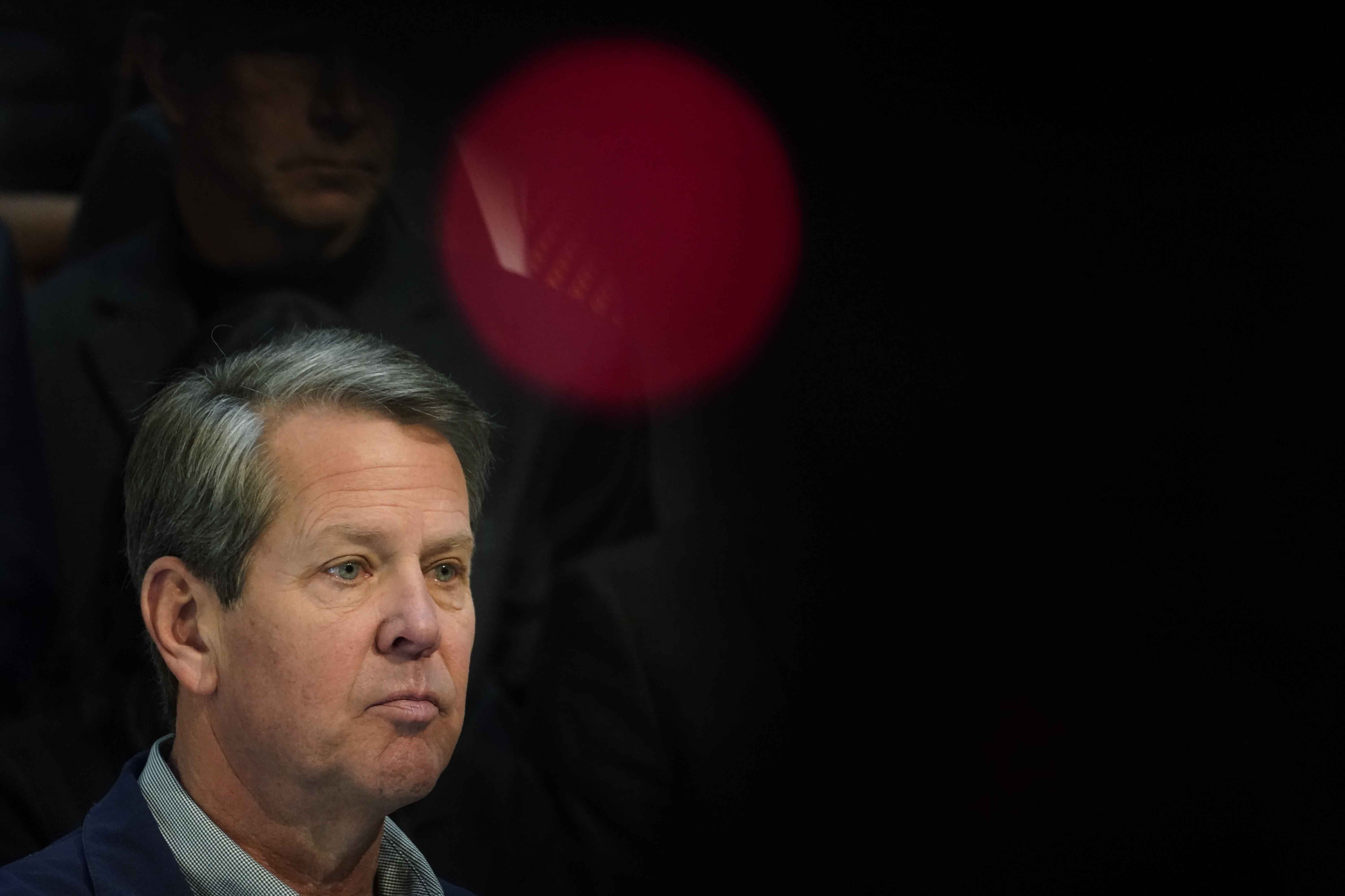 The Justice Department is suing the state of Georgia over its controversial bill altering election practices in the state, top federal officials announced Friday.

Republican state legislators around the country have pushed a host of provisions that would make it more challenging for people to vote — moves that have targeted Democratic-leaning voters and disproportionately impact people of color.

“Our complaint alleges that recent changes to Georgia’s election laws were enacted with the purpose of denying or abridging the right of Black Georgians to vote on account of their race or color, in violation of Section 2 of the Voting Rights Act,” U.S. Attorney General Merrick Garland said at a press conference announcing the lawsuit.

And Kristen Clarke, the head of the department’s Civil Rights Division, said the changes in Georgia would disproportionately hamper black voters’ access to the polls.

“The provisions we are challenging reduce access to absentee voting at each step of the process, pushing more Black voters to in-person voting where they will be more likely than white voters to confront long lines,” she said.

While suits under the landmark Voting Rights Act of 1965 can be brought over election practices simply because they disproportionately impact minorities, Garland and Clarke notably alleged that the new provisions in Georgia are intentionally discriminatory: meaning that the Justice Department believes it can prove that the state legislature purposefully sought to diminish the voting power of African American voters.

Georgia’s Election Integrity Act, which was passed on a party-line vote and signed into law by Republican Gov. Brian Kemp in late March, contained a slew of changes to election laws in the state. The new law changed how voters can cast their votes. It replaced the state’s signature verification system for absentee ballots with an ID-based system and tightens the window that those ballots can be requested. It codified the use of dropboxes in state law, while severely restricting their use in and around the Democrat stronghold of Atlanta, compared with the emergency authorization during the 2020 election.

The law also drastically shortened the runoff period in Georgia, after Republicans lost a pair of high-profile Senate races earlier this year. The law does expand in-person early voting in many smaller counties in the state, while maintaining the status quo in larger counties that already had more expansive options.

One of the provisions of the bill that caught the most attention was a prohibition on “line warming” — the practice of sharing food and water with voters waiting in line — that Clarke said the Justice Department will also be challenging.

“As we allege in our complaint, this needless ban was passed with unlawful discriminatory intent,” she said on prohibitions regarding food and water.

Georgia Secretary of State Brad Raffensperger said he would vigorously defend the law. “The Biden Administration continues to do the bidding of Stacey Abrams and spreads more lies about Georgia’s election law,” he said in a statement. “I look forward to meeting them, and beating them, in court.”

Similarly, Kemp, a Republican, accused the administration of “weaponizing” the Department of Justice.

The law also stripped Georgia’s secretary of state of power on the state elections board, making the board majority-appointed by the state legislature.

Raffensperger, a Republican, clashed repeatedly with former President Donald Trump following the 2020 election. Trump tried to pressure Raffensperger into trying to overturn the results in the state, but Raffensperger pushed back privately and publicly, insisting the election was a free and fair one.

The state elections board is also now able to suspend local election administrators from their posts and name a board-appointed replacement.

Garland’s announcement came on the eight-year anniversary of Shelby County v. Holder, a Supreme Court case that gutted a key provision of the Voting Rights Act of 1965, which required certain states and other jurisdictions to get changes to election law “pre-cleared” by either the Department of Justice or a D.C. court before they could take effect.

“If Georgia had still been covered by Section 5, it is likely that S.B. 202 would never have taken effect,” Garland said. “We urge Congress to restore this invaluable tool.”

As all this has unfolded, the Justice Department has grappled for ways to combat the state-level trends. Earlier this month, Garland announced that the department’s Civil Rights Division would double the number of people it has focused on protecting voting rights. He also said the department was scrutinizing new laws limiting access to voting, as well as post-election audits.

The Justice Department announcement came as voting rights attorneys and political operatives are awaiting the outcome of two pending Supreme Court cases from Arizona that are likely to lay out standards for future litigation over voting-process rules and changes in states across the country.

The closely watched cases pending at the high court involve a 2016 Arizona law banning the collection of mail-in ballots by private individuals — a practice critics dub “ballot harvesting” — and the state’s long-standing policy allowing counties to disregard ballots cast by voters who show up at the wrong precinct.

Decisions in the cases were expected Friday as the Supreme Court releases its usual flurry of late June rulings before the justices take their summer break. However, the voting-rights cases were not among the rulings released Friday and decisions are now expected to continue into next week.

The new lawsuit from the Department of Justice revolves around Section 2 of the landmark Voting Rights Act of 1965, which is at the heart of the Arizona cases pending before the Supreme Court. Some voting rights experts fear the Supreme Court could gut the section.

Garland and Deputy Attorney General Lisa Monaco also said the Department of Justice will take more concrete steps to protect election officials, who have faced an unprecedented wave of threats in the run-up to and following the 2020 election.

Monaco will release a directive to federal prosecutors and the FBI on the threats and instructing them to prioritize investigating those threats. The DOJ is also launching a task force to focus on the threats.

The move also comes as Trump and his supporters around the country push for conspiracy-driven, so-called audits of votes cast in the 2020 presidential election.

In Arizona, the Republican-controlled state Senate has contracted with a firm called Cyber Ninjas to examine the ballots in Maricopa County, the state’s most populous county that now-President Joe Biden narrowly won in 2020 en route to flipping the state.

That review by Cyber Ninjas, which has no discernible history in election administration, has been criticized by election experts, the Democratic Secretary of State Katie Hobbs and the Republican-controlled Maricopa County government as ham-fisted and dangerously undermining confidence in American elections for political benefit.

Garland said the Department of Justice is monitoring the audits and developing guidance to make sure post-election audits “comply with federal law.”

A recent report from Trey Grayson, the former Republican Kentucky secretary of State, and political scientist Barry Burden for the nonpartisan group States United Democracy Center ripped the Arizona review for not following well-established audit practices and for a lack of transparency.

“Because it lacks the essential elements of a bona fide post-election analysis, the review currently underway in Maricopa County will not produce findings that should be trusted,” the report read.

The proliferation of conspiracy theories has set off alarm bells at the Department of Homeland Security. The department’s top counterterrorism official told members of Congress in a closed-door briefing earlier this week that officials there are monitoring extremist online chatter about the false notion that Trump could be reinstated as president in August. That official, John Cohen, told members that the department doesn’t see any immediate credible threat of violence. But he added that the theory is part of a broader constellation of theories pushing the notion that the 2020 election was rigged. That view fueled the Jan. 6 attack on the U.S. Capitol.