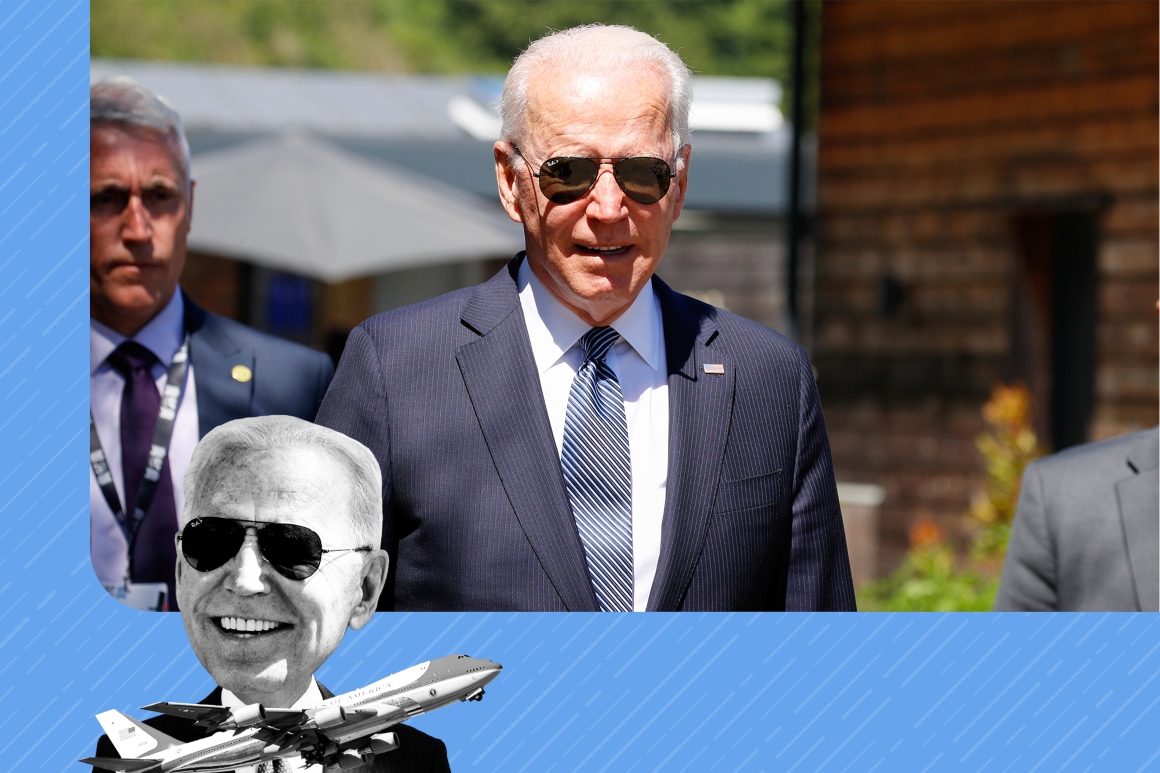 President Joe Biden is in Geneva prepping for his head-to-head summit with Russian President Vladimir Putin — where this week-long trip to Europe will get very real, very quickly.

The meeting will take place across two sessions at an 18th-century villa overlooking Lake Geneva, and is shaping up as a chance for both sides to express “red lines” in their broken relationship.

For now, there’s little incentive for either side to concede anything, but Biden is backing off some of his earlier blunt talk about Putin: “He’s bright. He’s tough … a worthy adversary,” Biden told reporters in Brussels. No mention of Putin being a “killer” this time. Instead, it was up to Vice President Kamala Harris, in address to a Brussels foreign policy forum, to say that “autocrats have become more destructive. Human rights abuses have multiplied. The rule of law that underpins our international order is under assault.”

The legacy of the first EU-U.S. summit since 2014, meanwhile, is a trail of new transatlantic alliances, task forces, councils, working groups and dialogues. We break it down here, and look at the traps Biden needs to avoid in Geneva.

Will a bunch of committees really fix the transatlantic relationship’s knottiest problems?

There will be U.S.-EU dialogues on Russia, cyber threats, and migration; councils on trade and tech, and another on competition; a task force on Covid supply chains; a working group on steel tariffs; an alliance on “Green Tech”; and a “cooperative framework” on the Boeing-Airbus dispute. The EU loves this sort of thing, but there will need to be some serious expectation management — the biggest risk is these committees just become dumping grounds for big problems that need political solutions from the top.

That’s the risk I was pointing to when I called the Boeing-Airbus five-year ceasefire a Band-Aid in this morning’s round-up. But President Biden called it a “major breakthrough” — we’ll know in a year which one of us is right.

The most inflammatory transatlantic trade dispute, on EU steel and aluminum, is a good example of that risk. The tariff dispute will be even harder to resolve than the aircraft subsidies issue and — not wanting to alienate America’s steelworkers — Biden is in no hurry to unwind these tariffs. Instead, the EU and U.S. have set up a “working group” to try to resolve their differences within a six-month deadline.

Ursula von der Leyen said the trade and tech council will focus on “the most urgent” issues first. She singled out microchips, and the need to “jointly commit to maintain supply chains open, and to keep supply chains secure.”

That’s because there’s a global shortage in semiconductor production. The U.S. and EU agreed to work together on fixing this imbalance as part of a broader effort to secure the supply chains of critical sectors that are under increased competition from the likes of China, including by bring more microchip production closer to home. What’s unclear, though, is how Brussels and Washington plan to succeed when both are wooing semiconductor companies — often in competition with each other.

What did the EU and US decide on China?

Heath: I nearly fell out of my chair when I read that Brussels and Washington will work together on “addressing non-market practices of third parties that may harm their respective large civil aircraft industries,” an obvious reference to China. Who are they kidding? The EU and U.S. can’t solve their own 17-year-long dispute about rampant aviation subsidies — but now they want to lecture others!

Ryan has a point, but at least Airbus is clearer-eyed about China’s growing competitiveness, unlike Volkswagen, which was one of the leading forces behind Germany’s insistence on an EU-China investment deal. On the other hand, the EU leaders who met Biden made no mention whatsoever about the elephant in the room, China, during their press conference remarks. It’s as if Biden traveled all the way to Brussels to talk about … the Caucasus. Biden may have managed to include a few mentions about China in the post-summit communique — but it was squeezed down to paragraph 26.

For now, Europe continues to walk a very fine line when it comes to Beijing, and is still reluctant to cast China as its biggest geopolitical rival, as the U.S. does. But as the last few days have shown, it’s not impossible for Washington to get something out of the Europeans to confront Beijing, namely on human rights, unfair trade practices, WHO reform and tech cooperation.

What is the plan for handling Putin?

: Biden’s aides say the president will press Putin directly on cyber attacks, human rights and Russian aggression in Ukraine. But Biden also hopes to speak to him about areas where they might have common ground, including nuclear arms control and climate change.

What Biden is really doing is placing a big bet that he can forge a relationship with Putin based on skepticism and stability. His predecessors couldn’t, but he has gone out of his way to meet and push back on authoritarian figures throughout his career, so he does have some experience to lean on. In 1993, he confronted Slobodan Milošević, the former leader of Serbia and Yugoslavia, calling him a war criminal. In 2009, he cut short a formal dinner with Afghan President Hamid Karzai over a corruption disagreement.

Biden told a journalist that in 2011 he turned to Putin and said, “Mr. Prime Minister, I’m looking into your eyes, and I don’t think you have a soul.” According to Biden, Putin smiled and replied, “We understand one another.”

Nuclear arms control provides a possible exception to low expectations about the meeting. Both countries are striking a similar tone, and ex-defense chiefs, foreign ministers and retired nuclear commanders from both nations have proposed a series of steps the two leaders could take to help constrain the world’s deadliest arsenals. From a simple pledge to resume regular negotiations to seek further reductions, to a more ambitious but nonbinding public commitment to reduce current arsenals.

Just days after Biden took office in January, the United States and Russia agreed to a five-year extension of the New Strategic Arms Reduction Treaty, which limits both sides’ most powerful nuclear arms to 1,550 deployed weapons. But there is little agreement on what might come next.

Cerulus: The G-7 countries on Sunday agreed to “work together to urgently address the escalating shared threat from criminal ransomware networks.” Putting an end to ransomware attacks that begin in Russia would require stopping millions of dollars from reaching the criminal gangs, and — crucially — getting Russian law enforcement to actually start cracking down.

What traps must Biden avoid when meeting Putin?

Kumar: I’ve been talking to people about this the last couple days and I keep hearing about two concerns. First, Biden shouldn’t be alone with Putin. When the two last met a decade ago, Putin asked Biden, then vice president, to meet alone for part of the time. My sources don’t want Biden to agree to do that this time — because of concerns that there would be no record and Putin could spin it any way he wanted. Second, Biden shouldn’t fall for Putin’s usual tactic to try and equate Russia’s bad behavior with other countries’ behavior when there is no legitimate comparison. They don’t want him to fall for Putin’s tactic the same way Trump did when he said Russia might extradite criminals to the U.S. if Washington made Americans available to Moscow for questioning.

I was earlier of the mind that if the two didn’t hold a joint press conference, that would be a sign of how bad the meeting went. But I’ve changed my stance on that. If it holds that Biden does a solo appearance, I think he’s avoiding a trap right there. Putin has in the past used joint appearances to spring surprises on counterparts (like suggesting visa-free travel to Biden last time). Another trap to avoid with Putin: Lengthy discussion of what a “rules-based order” really means. He’s never going to get Putin to come around on the idea, which Russian officials frequently deride as a way for the West to stay hegemonic. The whole thing becomes pedantic and didactic.