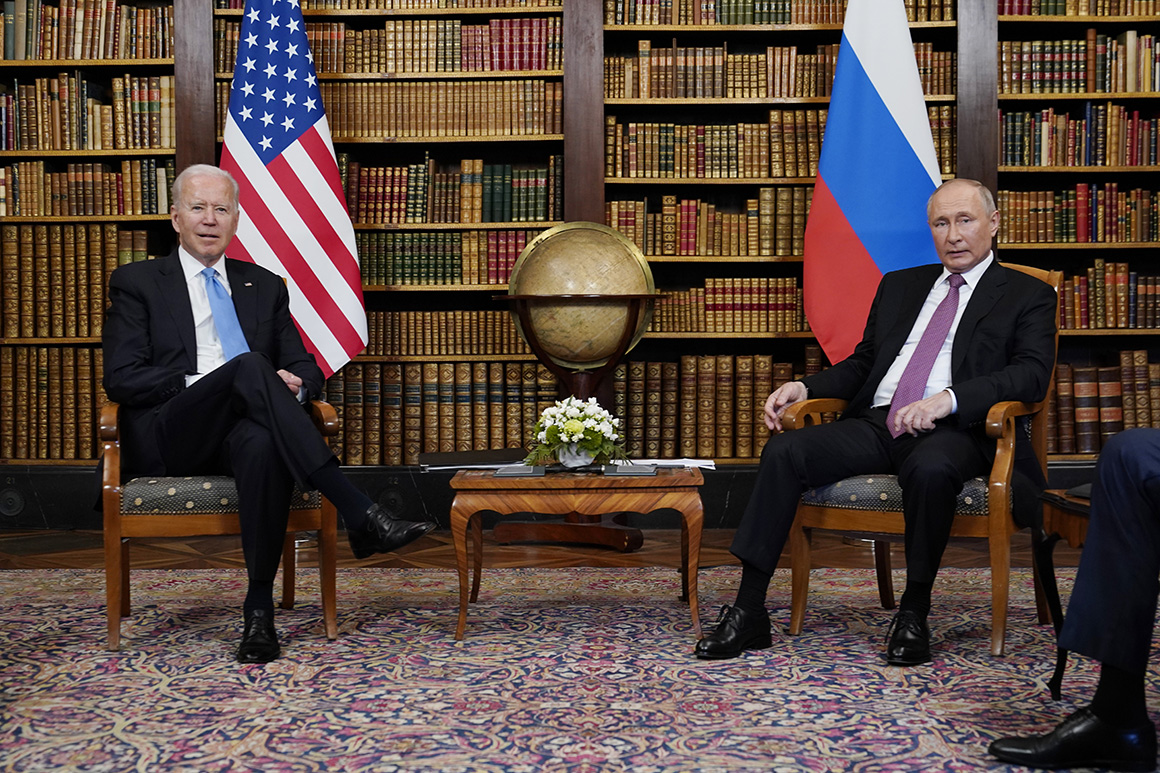 The two presidents briefly shook hands before the cameras, then walked into an 18th-century Swiss villa overlooking Lake Geneva, where they are expected to meet for several hours. In a photo opportunity inside, each sat before shelves filled with books, with their countries’ flags behind them and a globe positioned in between.

Putin was reported to have said that he hoped the meeting would be “productive,“ while Biden said that it’s “always better to meet face-to-face.” Russian media also released a separate image of the two men standing together, looking at each other while smiling.

The men are expected to take breaks in the meetings, as needed, but they will not share a meal together. “No breaking of bread,” a senior administration official said.

Biden’s aides say the president plans to press Putin directly on cyberattacks, human rights and Russian aggression in Ukraine. But, they also say, Biden hopes to speak to him about areas where they might have common ground, including nuclear arms control and climate change.

Back home, the president has continued to face criticism from Republicans that the meeting that Biden suggested rewards Putin and puts Russia on the same level as the U.S. Even some Democrats are urging Biden to take a tougher line.

The White House said it doesn’t expect the meeting to lead to any major policy agreements, but says it’s the first step to establishing a relationship between the two men, who last met a decade ago.

“We’re not expecting a big set of deliverables out of this meeting,” the administration official said. “I think we expect that there will be areas where the presidents will task out further work to their teams.”

One small exception: Both countries have left open the possibility their ambassadors could return to each other’s countries. The ambassadors returned to their home countries in the wake of U.S. sanctions on Moscow for the SolarWinds hack and the poisoning and imprisonment of opposition figure Alexey Navalvy; Russia levied a slate of reciprocal sanctions on Washington — but both ambassadors are now in Geneva for the meeting.

In recent weeks, Putin has continued to face allegations he has amassed troops along the Ukrainian border, allowed Russian actors to engage in cyber aggressions, cracked down on political dissent, and signed deals with Iran to provide them with satellite technology.

Earlier this week, Putin told NBC News that he couldn’t guarantee that Navalny, one of Putin’s fiercest critics, would leave prison alive. Navalny was sentenced to prison after returning to Russia from Germany in January following his recovering from poisoning with a nerve agent.

The Biden administration has imposed sanctions but members of both parties want him to do more on the Nord Stream 2 pipeline nearing completion, which will bring natural gas from Russia to Germany under the Baltic Sea.

The last four presidents have sought to re-engage with Russia to varying degrees and with limited success. George W. Bush infamously said he’d looked Putin in the eye and peered into his soul. Obama dubbed his attempt a reset. In 2018, then-President Trump provoked a firestorm for blindly accepting Putin’s denial of election interference, countering multiple assessments by U.S. intelligence agencies, after the two leaders met in Helsinki.

Michael McFaul, former ambassador to Russia for Obama, who was present during Biden’s last meeting with Putin a decade ago, said Biden needs to be careful about Putin’s tendency to equate his own behavior with those of others.

Biden’s comment earlier this week that appeared to suggest that he would be open to an exchange of cyber criminals left some Russia experts worrying Biden was falling for Putin’s tactic the same way Trump did when he said Moscow might extradite criminals to the U.S. if the Washington made Americans available to Russia for questioning. National Security Adviser Jake Sullivan tried to quickly clarify Biden’s remarks, noting that the president “was not saying, ‘I’m going to exchange cyber criminals.'”

The meeting comes on the final day of Biden’s eight-day trip to Europe in which U.S. allies in the G-7 and NATO welcomed him warmly following four years of Donald Trump’s “America First” policies. Biden consulted other world leaders about the Putin meeting and prepped for the bilateral session with Blinken, Sullivan and other policy experts.

Biden aides say the president will outline areas of America’s vital national interests, and will convey that where Russian activities run counter to those interests they will be met with a response.

“He’s been preparing for this like he prepares for every significant international engagement. He reviews the issues — written material; he cares about digging into the details,” the official said. “That very much matters to him. And he’s also had the opportunity to engage with a wide variety of advisors across the government who have deep expertise on Russia, as well as to hear from some outside experts as well.”

After the meeting, Biden and Putin are each expected to hold separate news conferences. Biden will wait until Putin is finished before he begins. Late Wednesday, Biden is expected to return to Washington.