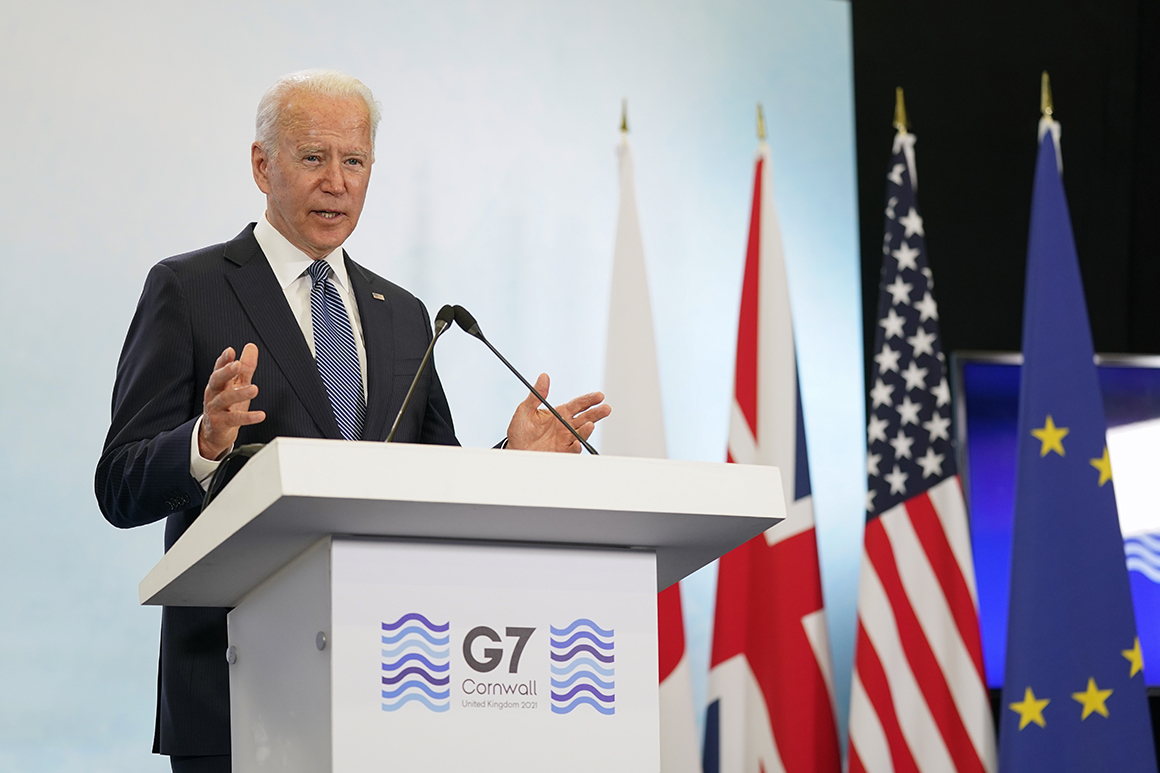 President Joe Biden highlighted the camaraderie of the G-7 summit on Sunday, telling reporters that the enthusiasm about the U.S.’ full engagement and return to the table was palpable.

But with America’s supposed return as the leader of world democracy comes the weight of having to address conflict with non-democratic countries like Russia and China.

“I know this is gonna sound somewhat prosaic, but I think we’re in a contest … with autocrats, autocratic governments around the world, as to whether or not democracies can compete with them in a rapidly changing 21st century,” Biden said during a press conference in England.

“And I think how we act, whether we pull together as democracies, is going to determine whether our grandkids look back 15 years from now and say, ‘Did they step up? Are democracies as relevant and as powerful as they had been?”

Discussing the G-7 end-of-summit communique, Biden repeatedly said Sunday that his goal isn’t conflict with adversaries, but to find points of compromise. But, he said, where leaders fail to act with behavior that is “consistent with international norms,” the U.S. will respond and hold the countries accountable when it comes to threats such as the ongoing cyberattacks plaguing U.S. infrastructure.

Biden will start with Russian President Vladimir Putin on Wednesday, where he’s set to meet with the Russian president in Geneva, Switzerland. The summit will take place at the end of Biden’s broader visit to Europe, where he’s meeting with America’s allies in NATO and the European Union, giving the president a chance to listen to the concerns of other leaders ahead of the meeting with Putin.

Putin, in an interview Friday, said Russia’s relationship with the United States has “deteriorated to its lowest point” in recent years.

“Let me be clear that he’s right in it’s a low point, and it depends on how he responds to acting consistent international norms,” Biden said Sunday. “In many cases, he has not.”

Biden was candid about America’s inability to change Putin’s behavior through measures such as sanctions. But with other problems facing Russia, Biden said there will be room for finding common ground.

“Let me say it this way, Russia has engaged in activities which we believe are contrary to international norms, but they have also have also bitten off some real problems they’re going to have trouble chewing on,” citing Russia’s attempt at rebuilding Syria as one example where the U.S. may be able to find a way to negotiate with Putin.

Biden was also pressed on whether the G-7 communique had enough concrete action to address China, and whether he was satisfied with the statement. Biden said he was, noting that China wasn’t mentioned the last time the G-7 leaders convened. He also highlighted the group’s decision in Sunday’s release to explicitly condemn human rights abuses in Xinjiang and Hong Kong.

“And so what I think you’re going to see is straightforward dealing with China,” Biden said.

The president said in order to ease tensions, China must act with transparency, pointing to the country’s lack of cooperation in determining the pandemic’s origin, as one example.

“It’s important to know the answer to that because we have to have access — we have to build a system whereby we can know what, when we see another [country’s] lack of transparency.”