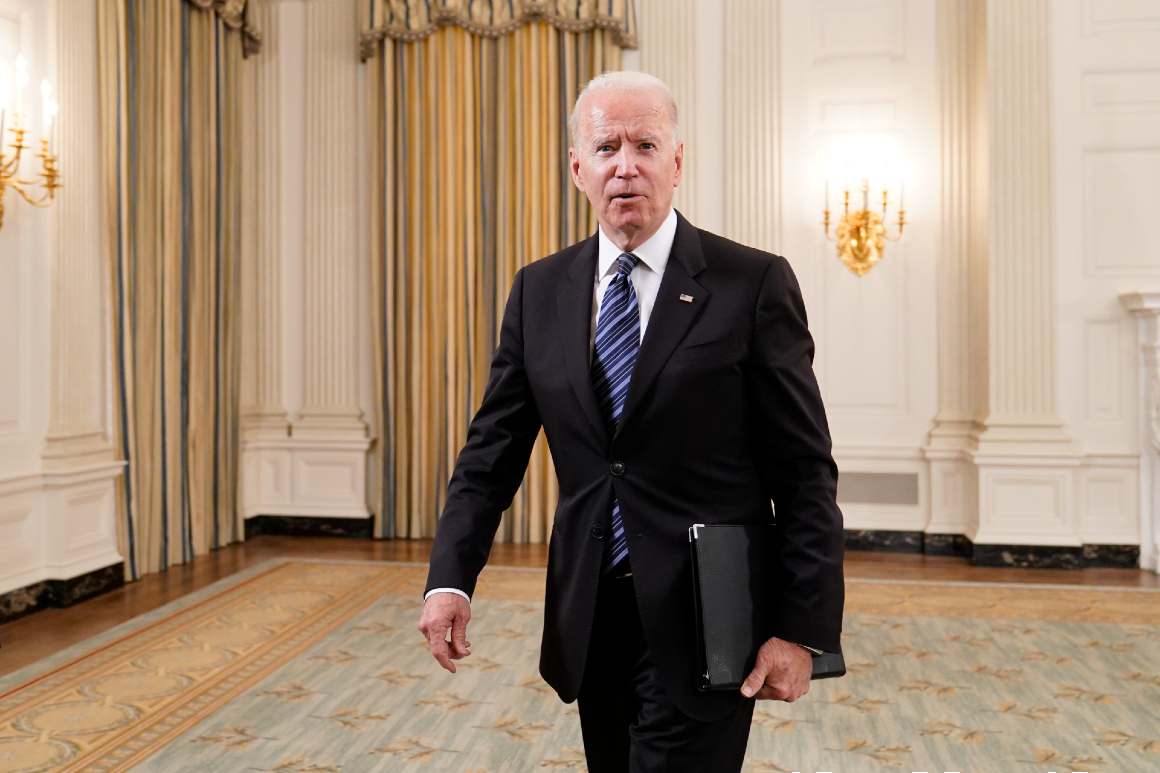 President Joe Biden on Thursday endorsed the bipartisan infrastructure framework clinched by 10 senators, appearing alongside them at the White House to declare “we have a deal.”

The Senate’s nascent infrastructure deal faced a crucial test as its negotiators met with the president to discuss a framework that’s won the endorsement of 21 senators in both parties. Several of those senators and administration officials reached a breakthrough Wednesday evening that raises the prospects of a successful agreement on a nearly $1 trillion infrastructure bill.

Under the framework, the bipartisan package, led by Sens. Kyrsten Sinema (D-Ariz.) and Rob Portman (R-Ohio), would include more than $550 billion in new spending on roads, bridges and other traditional infrastructure projects. The White House and the bipartisan group have spent this past week negotiating on how to pay for the package. Senate Republicans have said they will not touch the corporate tax rate, while Biden and Senate Democrats have rejected proposals to index the gas tax and enact fees for electric vehicles.

Importantly, it’s not clear yet whether Senate Majority Leader Chuck Schumer and Senate Minority Leader Mitch McConnell will endorse the deal. Schumer and Speaker Nancy Pelosi also met with administration officials Wednesday evening. Schumer has emphasized that the infrastructure plan is currently on two tracks: the first is bipartisan, while the second is set to include policies that have no chance of getting Republican support.

Pelosi told a group of her members on Thursday morning that the House will not pass a bipartisan infrastructure bill until the Senate also passes a party-line bill that includes more key pieces of Biden’s sprawling $4 trillion proposal.

“There ain’t no infrastructure bill without the reconciliation bill,” she said, according to a person on call.

While people close to the group were optimistic about Biden’s backing, the thumbs-up he’s expected to give won’t necessarily ensure the potential agreement can get through Congress. There’s been very little transparency about what’s in the proposal; the bipartisan group has not released details and still must draft a massive piece of legislation.

After meeting with McConnell, Portman said the GOP leader was undecided but “remains open-minded” about the deal. If there are any Democratic defections, McConnell could have major say over whether the bill passes the 50-50 Senate. Many Republicans are skeptical the deal is actually fully paid for.

“My sense is there’s much closer to 20 votes for that than 60 votes for that,” said Sen. Chris Murphy (D-Conn.), who acknowledged it’s “an open question” as to how Senate Democrats guarantee they’ll get the second package done. “I am not voting — there are not the votes — for the bipartisan package unless that question is sufficiently answered.”

On his way into Schumer’s office on Thursday morning, Sen. Mark Warner (D-Va.) said he was even more optimistic than he was on Wednesday evening and said the last issue on paying for the legislation had been “cleared up.”

Warner is “anxious” to publicly release the framework and acknowledged there was a lot more work ahead.

“We’ve got to convince more of our Republican colleagues to come on,” Warner said. “I am very aware as a member of the Budget Committee that there’s a lot of categories that the president has laid out and my Democratic colleagues have laid out that aren’t fully addressed on this.”

And even if a firmer deal is reached after Thursday’s meeting with Biden, both leaders will need to sell it to their members.

Progressives have insisted that they will sign onto the bipartisan package only with the guarantee of a second infrastructure package, which would include priorities like child care. While incumbent Sen. Raphael Warnock (D-Ga.) said he’d support it, others demurred. When asked whether he’d support the bipartisan talks, Senate Budget Committee Chair Bernie Sanders (I-Vt.) said: “Why don’t you tell me what’s in it some day?”

However, with the Senate evenly split, every Democrat will need to sign on to the second bill.

Sen. Joe Manchin (D-W.Va.), who is taking part in the bipartisan negotiations, has yet to say where he’ll support a package passed with only Democratic support using the protections of the budget process to sidestep a GOP filibuster.

“It is difficult,” said Senate Majority Whip Dick Durbin (D-Ill.). “When we say we want Democrats, for example, to sign onto the reconciliation, Joe Manchin says to me, rightfully so: ‘What’s in it?’”

While the White House has long wanted to reach an agreement with Republicans and was willing to accept an offer far below its original proposal, it remained outwardly measured over the progress of negotiations. Two sources close to White House discussions describe an administration balancing the intense desire of a president to forge a bipartisan deal but at the same time having to bat back progressive outrage over ongoing discussions with Republicans.

“They want this deal so bad,” a Democrat close to the negotiations said of the White House. “But they can’t show it.”