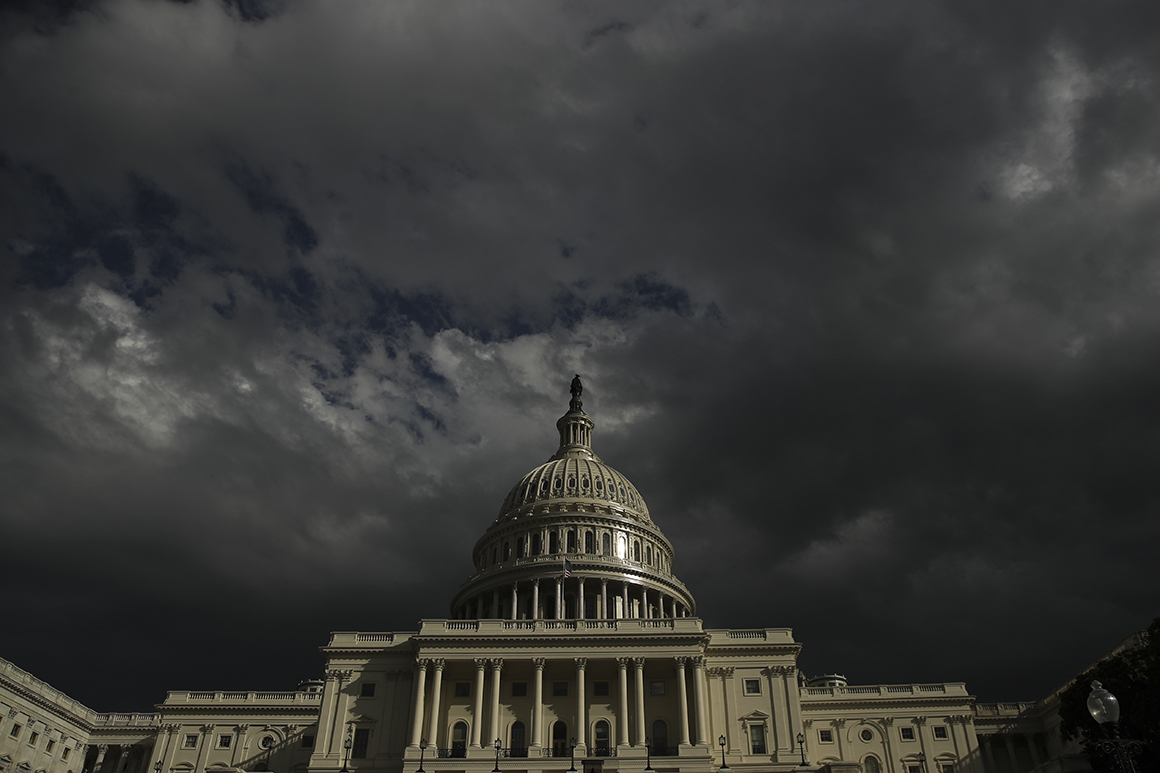 President Joe Biden clearly wants to be a climate president. He’s set ambitious climate targets. He’s assembled a team of passionate climate wonks and activists. He’s announced a “whole of government approach” to the climate crisis, followed by a drumbeat of aggressive executive actions. He’s also proposed extraordinary climate investments in his infrastructure plan, and an hour rarely goes by without an administration official urging Congress to pass it.

But Congress has not passed it, or even unveiled a draft. And now that Biden has ended one effort to negotiate a bipartisan infrastructure deal only to begin another, climate hawks are starting to worry that their issue is getting thrown under a fossil-fueled bus. For all of Biden’s green goals, green team and green executive orders, the centerpiece of his green agenda is his proposal to throw hundreds of billions of dollars at the climate crisis through his American Jobs Plan, and it’s hard to see a path where a Republican-supported infrastructure bill would spend that freely to slash greenhouse gas emissions.

Sen. Sheldon Whitehouse (D-R.I.) sounded the alarm in a Twitter thread Tuesday, declaring himself “officially very anxious” about the fate of climate legislation. He suggested that Biden seemed more intent on a bipartisan deal than a climate-friendly one, that the business community is nowhere to be seen and that climate advocates are unhelpfully squabbling over details. “We need planning, organizing and momentum,” he wrote. “We are running out of time.”

But the $2.5 trillion American Jobs Plan is clearly the centerpiece of Biden’s climate agenda, proposing about $1 trillion for wind, solar, electric vehicles and other accelerants for the clean energy transition. Now climate activists are worried that Biden will throw those investments overboard to mollify Republicans and Sen. Joe Manchin of West Virginia, the coal-friendly centrist Democrat whose vote can essentially decide what’s allowed to pass in an evenly divided Senate. They got more bad news last night when Biden’s top climate adviser, Gina McCarthy, acknowledged in an interview with POLITICO that a clean electricity standard, one of the climate community’s top priorities, might not make it into the final infrastructure bill.

“We’re very excited about the president’s executive actions, but if he’s going to honor his commitments on climate, they need to be coupled with transformational legislation,” said League of Conservation Voters lobbyist Tiernan Sittenfeld. “Our future literally depends on it.”

The White House has tried to reassure its allies in the climate movement that it’s still pushing hard for an infrastructure bill that moves the needle on emissions. Biden visited a Ford factory in Detroit to tout the $174 billion for electric vehicles in his American Jobs Plan, Vice President Kamala Harris visited a clean energy lab in Milwaukee to highlight the plan’s investments in research and development, and Cabinet secretaries like Jennifer Granholm at Energy and Pete Buttigieg at Transportation have been flogging the plan relentlessly in the media. Last week, when Biden rejected a more modest infrastructure proposal by Sen. Shelley Moore Capito (R-W.Va.), one reason he cited was that it failed to tackle the climate crisis.

Ali Zaidi, the deputy White House climate adviser, said the administration is proving its commitment to the climate every day, rolling out changes for every sector of the economy to help meet Biden’s goal of cutting emissions 50 percent from 2005 levels by 2030. Some of the changes have been low-profile, like the Department of Transportation’s effort to ease the siting of transmission lines along federal rights-of-way, a resolution to a trade dispute that kept a Korean electric-vehicle battery factory open in Georgia or a new research program promoting innovative efforts to reduce methane emissions.

Others could have more dramatic impacts, like rejuvenating a long-dormant clean energy loan program with $40 billion in unused lending authority, revisiting the vehicle fuel-efficiency standards that EPA weakened under President Donald Trump or phasing out the planet-warming refrigerants called hydrofluorocarbons.

“The big takeaway here is that from the campaign into the transition and into the early days of this administration, we’ve been focused on a sector-by-sector basis on advancing the president’s climate priorities,” Zaidi said. “We’ve been doing it for electricity, transportation, industry, buildings and agriculture, and it all reinforces the good policy and good politics of what we’ve presented to Congress in the form of the American Jobs Plan.”

Nobody doubts that Biden ideally wants an infrastructure bill with full funding for his climate priorities. What climate advocates fear is that he’ll settle for an infrastructure bill without it, or perhaps end up with no bill after wasting months in the futile pursuit of bipartisanship. The White House is in a tricky position because Manchin has demanded a genuine effort to attract Republican support, and Democrats can’t pass anything without Manchin on board.

But Democrats could lose control of the Senate if a single senator gets sick or dies, so environmentalists who have watched Congress spend $6 trillion on Covid relief bills without addressing climate would like to see a bit more urgency to address it now. They weren’t happy when Biden stripped out the American Jobs Plan’s investments in clean energy research in a counteroffer to Capito, and they’re anxious about what could be stripped out next.

The more confrontational elements of the climate left are in public freakout mode. The youth-oriented Sunrise Movement, which gave Biden’s initial climate plan an F-minus grade during the Democratic primary but praised his initial infrastructure plan for its climate ambition, protested his negotiations with Capito and other Republicans outside the White House last week. Sunrise executive director Varshini Prakash warned on Tuesday that “anything less than a robust jobs and climate package is a death sentence for our generation.”

Mainstream environmentalists have tried to be more sensitive to the tightrope Biden is walking, but they’re nervous, too. As much as they’re enjoying Biden’s efforts to reverse Trump’s environmental rollbacks and advance clean energy through executive action, their top priority is a far-reaching climate bill. They’re glad Biden took a spin in the new electric Ford F-150 Lightning, and they appreciate his executive order promoting wind farms off the California coast, but they really want him to sign a law putting big money into electric vehicles to transform transportation and creating a clean electricity standard to transform the grid.

“Look, no one ever thought this would be easy,” said Jamal Raad, executive director of Evergreen Action, an influential group formed by Washington Gov. Jay Inslee’s former climate aides. “But we’ve got to get this done if we’re serious about meeting the commitments we just made to the international community, and right now is make-or-break time.”

Global carbon emissions dropped about 6 percent last year because Covid shut down so much economic activity, but that just means the rate at which the earth is warming temporarily slowed a bit. The International Energy Agency just warned that creating a net-zero energy sector by 2050, a key goal of the Paris climate accord, will require radical changes: no new oil and gas exploration, no new coal plants that can’t capture their carbon, no more sales of fossil-fueled boilers after 2025 and no more sales of internal combustion engines after 2035.

Biden’s infrastructure plan embraced some of that radicalism; its clean electricity standard would require 80 percent reductions in electricity emissions by 2030, which would essentially shut down the U.S. coal industry and shut off growth in the natural gas industry. But it was largely compatible with Biden’s eagerness for bipartisanship, since many Republican lawmakers reject the scientific consensus that human activities are broiling the planet, while others reject the need for an expensive and heavy-handed government response.

Rich Powell, director of ClearPath Action, a group of conservatives who support climate action, said issues like carbon capture, battery storage and transmission all had bipartisan support, but not a trillion-dollar effort to decarbonize the U.S. economy in one fell swoop. He pointed to last week’s announcement of a new zero-emissions advanced nuclear project, featuring Secretary Granholm along with leading Wyoming Republicans, as the kind of bipartisan work that Republicans might agree to accelerate. He criticized Biden’s moratorium on oil and gas drilling on public lands, his rejection of the Keystone pipeline and a recent White House report on the environmental justice impacts of power plants, as the kind of ideological climate advocacy that could alienate Republicans and doom the American Jobs Plan.

“There’s risk in a go-it-alone partisan approach,” Powell said. “We’d strongly encourage folks to look at climate policy not as something that needs to be done all at once in this Congress, but something that should be done in every Congress so that we don’t have these wild swings in momentum. Unfortunately, climate change is a chronic condition for the planet.”

Zaidi, the deputy White House climate adviser, also mentioned several examples of Republican support for Biden’s climate priorities, including a government-backed “green bank” that would invest in clean energy, incentives that would reward farmers for cutting emissions and efforts to retool disaster aid programs to emphasize climate resilience. But that kind of talk makes many climate activists feel nauseous since it suggests that Biden isn’t just negotiating with Republicans because he wants to look magnanimous or humor Manchin, but because he genuinely believes Republicans might be willing to support a climate-friendly infrastructure bill.

Behind the scenes, White House officials have urged environmentalists to trust Biden and his long history of Washington sausage-making. They say he isn’t naive about the GOP under Senate Minority Leader Mitch McConnell, who has said that “100 percent of our focus is on stopping this new administration.” And most environmentalists want to give him the benefit of the doubt after hearing him spout climate rhetoric they’ve waited for their entire careers.

But all the cheery deal talk is bringing back bad Democratic memories of 2009, when bipartisan support for President Barack Obama’s market-friendly climate bill never materialized, and the bill crashed and burned on the Hill.

“I’m an eternal optimist, and you have to be to work on these issues, but I’m haunted by 2009,” said Sittenfeld of the League of Conservation Voters. “We can’t sit around waiting for Republicans. We have to go big, we have to go fast and we have to get this done.”