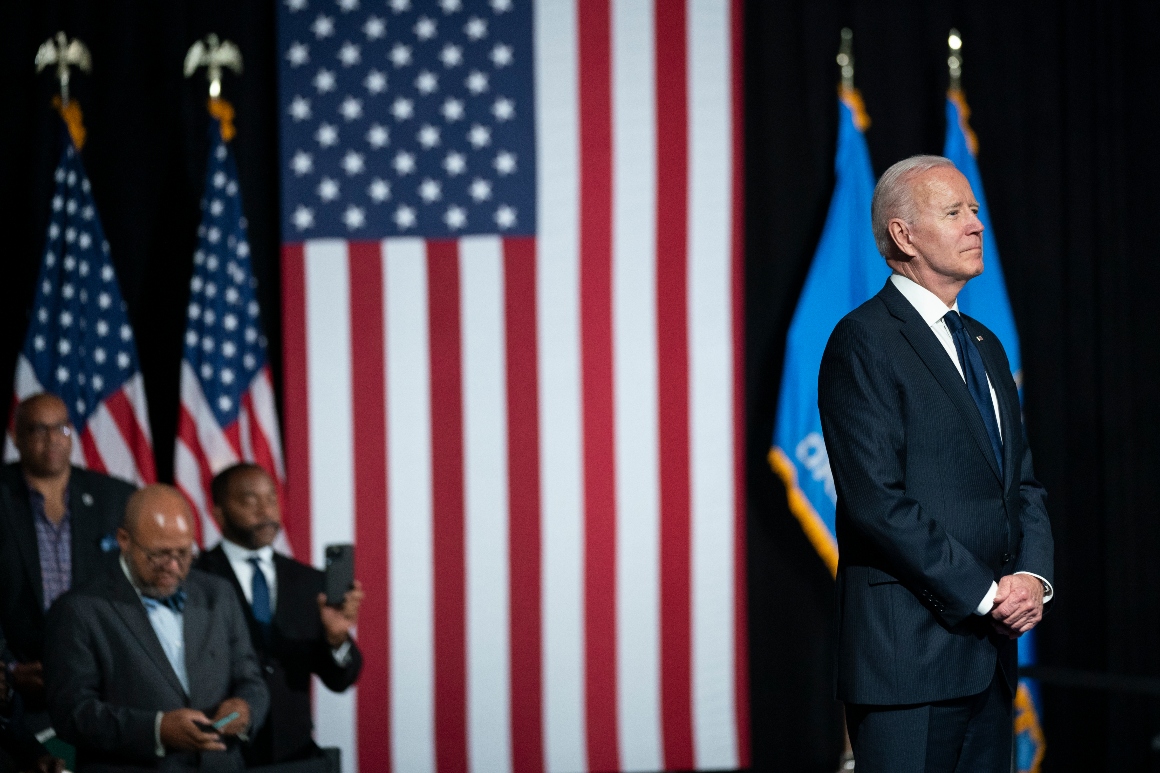 Joe Biden was more blunt about racism than perhaps any president before him — and than many in the crowd expected — in his remarks commemorating 100 years since the Tulsa Race Massacre Tuesday.

“He called out how through the years there have been members in elected office who were very public about their association or membership with [the] KKK,” Rep. Cori Bush (D-Mo.) said in the parking lot of the Greenwood Cultural Center. “He set up the scene in his speech to take us into what was happening at that time. And that was really powerful. I was so glad to hear it.”

But some attendees noted what they considered a glaring omission: any mention of reparations for the survivors of the massacre and their descendants, some of whom have sued the city and state for compensation, and a full-throated endorsement of H.R. 40, which would create a commission to study reparations. The bill passed out of the House Judiciary Committee in April for the first time since it was first introduced in 1989.

As a candidate, Biden said he supported a commission on reparations. But the administration has yet to endorse the actual bill. After his speech Tuesday, the president met with the members of the Congressional Black Caucus, who brought up the need for H.R. 40, which is named after the “40 acres and a mule” promise that now symbolizes the lack of support formerly enslaved people received from the federal government. According to those involved in the conversations, Biden let them down gently.

“He didn’t disagree with what we’re doing,” said Rep. Brenda Lawrence (D-Mich.), the 2nd vice chair of the CBC. “He did talk about his plate [being] full with trying to get the infrastructure bill passed and that he really wanted to make sure that he could get that through before he took on anything else.”

Biden’s biggest concern on H.R. 40, Lawrence said, is “getting it through the Senate.” The bill also hasn’t even been scheduled for a full floor vote in the House, where it has 188 co-sponsors.

Tuesday in Tulsa illustrated the dichotomy that has come to define Biden’s approach to issues of race and race equity. No president has so forcefully called out the nation’s sordid history. At the same time, Biden has downplayed the likelihood of legislative action, sidestepping calls for him to embrace rules reform in the Senate to allow easier passage of relevant bills. In addition to expressing fear that H.R. 40 would die in the Senate behind the scenes, Biden also announced on Tuesday that he was handing off the voting rights portfolio to his Vice President Kamala Harris.

For the nearly all-Black crowd inside the Greenwood Cultural Center, which included the three remaining survivors of the massacre, descendants, local leaders and activists, the Tulsa speech was a milestone. They watched and clapped as Biden went into detail about the massacre and drew a throughline to issues Black people still face today.

Representative Hank Johnson (D-Ga.), CBC whip, said Biden’s speech was “meaningful” for Tulsa and the country, adding “Most of America had absolutely zero knowledge of the greatest single atrocity to Black people in this country. For him to use his pulpit to publicize what happened to them has to have been cathartic for them.”

In the lead-up to Biden’s Tulsa trip, the administration announced initiatives to narrow the racial wealth gap including inequities in home appraisals and increasing the goal of federal contacts for small disadvantaged businesses. And in a gaggle on Air Force One on the way to the event, principal deputy press secretary Karine Jean-Pierre said that Biden “supports a study” of reparations “but believes that, first and foremost, the task in front of us … is to root out systemic racism where it exists right now.”

But for some in the audience, simply supporting a study wasn’t enough.

“I personally would have liked to hear the word reparations. I think that he was very strategic in the words that he used. He used the word repair,” said Nehemiah Frank, a descendant and founder of the Black Wall Street Times in Tulsa. “If you want to pull the people together, you can’t fully help Black people. That’s how I feel about it. If you want to make Black folks happy, you’re going to piss a lot of Americans off.”

Asked for comment, the White House pointed to Jean-Pierre’s statement aboard Air Force One.

Oklahoma state Rep. Regina Goodwin, a descendant of survivors of the Tulsa Race Massacre, said she talked with Biden about H.R. 40 and he reiterated to her “we’re in talks.”

Not everyone was as forgiving. Dreisen Heath, a researcher for Human Rights Watch, said she left immediately after Biden’s speech out of frustration of the lack of discussion on reparations.

“This was not a celebration. People are mourning. Every day counts for these survivors. And I think that people just play games with Black people’s lives too much. It’s not enough to just come in and say words and reiterate the truthful narrative,” Heath said.

Last year, Heath published a report on reparations for survivors of the massacre, saying it could and should serve as a test case for any larger federal reparations study or program.

Reparations for Black people in America has been a politically fraught and risky topic for Democrats for decades, though Republicans have essentially never wavered from their opposition. But activists say they have reason to remain hopeful even as the issue moves at a snail’s pace in Congress.

A POLITICO/Morning Consult poll from earlier this year found that just 38 percent of voters supported a committee to study reparations. But 60 percent of Democrats supported the formation while 74 percent of Republicans opposed it.

Despite the frustration and H.R. 40’s position on the Biden priority list, activists and CBC members promised to keep pressing the president and leadership in Congress to get the bill to the House floor, at the very least.

“It’s our work to continue to push him. We’re not going to seat a perfect president,” Bush said. “And so we know that we have to look at what our needs are and push. And so that’s what I’m going to continue to do.”