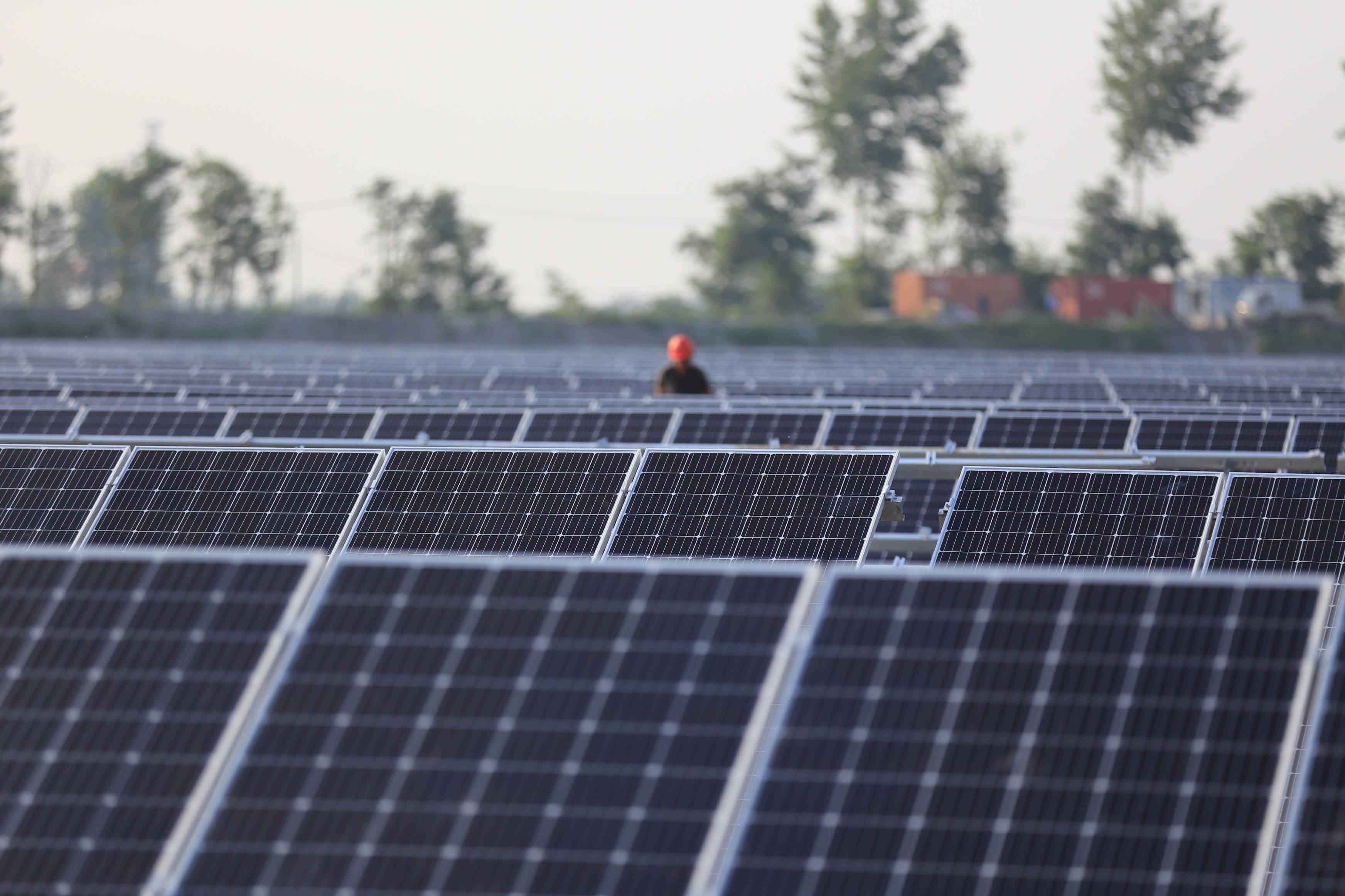 The Biden administration is considering banning imports of a critical solar panel material from China’s Xinjiang region, according to four people familiar with the administration’s plans, a move that would assuage bipartisan pressure to crack down on human rights abuses but could undermine the White House’s aggressive climate change goals.

At issue is polysilicon, the material inside most solar panels, which President Joe Biden hopes will help replace fossil fuels and allow the U.S. to eliminate carbon emissions from power generation by 2035. Currently about half the world’s supply of polysilicon comes from Xinjiang, where the Chinese government has been accused of rounding up hundreds of thousands of ethnic Uyghur Muslims in what the State Department has labeled a “genocide.”

“The kind of brutality that we’re talking about is offensive to just about anybody who would ever see these sorts of practices being used,” said Rep. Dan Kildee (D-Mich.), one of the lawmakers pushing Biden to act. “And they’re doing it to the economic benefit of companies that are putting American companies at risk.”

For months, a bipartisan group of lawmakers has pushed Biden to impose import restrictions on polysilicon similar to ones the Trump administration placed on cotton, tomatoes and other products exported from Xinjiang.

Now, the White House is considering an effective region-wide ban on polysilicon from Xinjiang, according to the four sources in the industry and on Capitol Hill with knowledge of administration plans.

The ban, called a withhold release order, would allow Customs and Border Protection to seize at U.S. ports any imports it suspects of being made with forced labor. Though the agency is weighing a region-wide ban, it could also opt for narrower action against specific Xinjiang-based factories or companies, two of the sources said. That would be in line with the strategy the Trump administration used, when it sanctioned shipments from a major Xinjiang paramilitary firm before imposing a subsequent region-wide ban on cotton products.

A CBP spokesperson said the agency does not comment on whether specific entities are under investigation.

Timing of any potential order is uncertain. While some industry lobbyists have expected action for weeks, congressional sources say they have not yet been briefed on any imminent moves from CBP, a typical agency courtesy before major actions.

Democrats on the House Ways and Means Committee called on the Biden administration last week to block imports of Chinese solar panels and other products that contain polysilicon made with forced labor in Xinjiang. They said that in a briefing earlier this year with congressional offices, CBP asserted that enforcement actions regarding polysilicon were forthcoming — but CBP has not yet taken any such step.

“There’s a bit of frustration that with as bad as the world now understands things to be in Xinjiang and the effect that it’s having, not only from a human rights standpoint but economic impact, we feel like there’s plenty of information that gives them what they need to act,” said Kildee, who led the letter alongside Chair Richard Neal (D-Mass.).

The Democrats say there is “overwhelming evidence” of the use of forced labor in polysilicon production that exceeds the standard for action under Section 307 of the Tariff Act of 1930, which prohibits the importation of merchandise mined, produced or manufactured in any country by forced or indentured labor.

“I understand sometimes it takes time for Customs to investigate and make a determination,” said Senate Finance Chair Ron Wyden (D-Ore.), who has separately pressed the issue in the Senate. “Supply chain issues can be incredibly complicated, and in some instances it’s hard to get reliable information, particularly if you’re talking about Xinjiang, [where] their information is tightly controlled. But aggressive, unrelenting enforcement is, to me, the prescription for this.”

Biden and fellow G7 nations vaulted the issue into focus at the recent summit when countries signed onto a carefully worded joint communiqué that called on China “to respect human rights and fundamental freedoms, especially in relation to Xinjiang.” It did not lay out any specific action for the U.S., nor did it specifically link Xinjiang to the concerns of forced labor in the solar supply.

“The basic notion in the communiqué was [to] call out Xinjiang in terms of its human rights abuses and then establish a neutral principle that all democracies can stand behind,” National Security Advisor Jake Sullivan recently said aboard Air Force One. “We are going to take concrete action and countermeasures against forced labor in these areas, and when you actually apply that in practice, that will have an impact on Xinjiang.”

But some in the industry are skeptical of how effective a WRO would be in eradicating forced labor in the complex solar supply chain given limited visibility into China’s activities.

“That [WRO] cannot be the only mechanism because that’s a slender reed on which we’re hanging all of our enforcement efforts,” one trade association official said. “That’s not the strong international mechanism that we need to send a message to China that this is unacceptable.”

CBP’s enforcement strategy for any upcoming trade ban is not yet clear. But in the case of the Xinjiang cotton ban, the agency has taken a hard line, forcing companies that import cotton products from China to trace their fibers all the way back through growth and processing. If companies cannot prove their fibers are not from Xinjiang, Customs seizes the shipment.

For the solar industry, which is coming off its latest record year of installations and is expected to see capacity quadruple this decade, the potential threat to supplies could hurt the supply chain that is already slowing projects and raising costs. That could slow deployment of the technology helping to drive Biden’s effort to put the country on a path to eliminate carbon dioxide emissions from the power grid by 2035.

The Solar Energy Industries Association led a pledge signed by hundreds of solar companies earlier this year committing to help ensure that the solar supply chain is free of forced labor. It also released a supply chain traceability protocol to help companies track products and components to the source, and called on its members to exit Xinjiang by the end of this month.

SEIA President and CEO Abigail Ross Hopper said that even if the administration did pursue a WRO that was targeted either at specific companies or Xinjiang, U.S. solar panel companies were already taking action to avoid disruptions in the supply chain.

“We spent the last nine months basically signaling to our companies that regardless of what actions the federal government took, they needed to take action to get out of there,” she said. “And I think the vast majority of them have done that.”

Roughly 45 percent of the global supply of solar-grade polysilicon was produced by the four Xinjiang-based manufacturers in 2020, according to Germany-based Bernreuter Research. Another 35 percent came from other regions in China, while the remaining 20 percent came from outside China. SEIA has said it believes that’s enough to supply the U.S., without polysilicon from Xinjiang.

A quarterly report from SEIA released last week cautioned that while average solar system prices remained relatively stable from the last quarter of 2020 to the first quarter of this year, key inputs for solar modules and installations, including polysilicon, are facing constraints.

Nikos Tsafos, interim director and senior fellow of energy security and climate change programs at the Center for Strategic and International Studies, cautioned in a recent blog post that it will be difficult for the U.S. to quickly restart its domestic manufacturing and exit Xinjiang without impacting deployment.

The majority of current global ingot and wafer production capacity is in China, making polysilicon manufacturers also dependent on China.

“You can’t really reshape industries that fast,” Tsafos told POLITICO. “I think there’s an underlying reality, which is that China’s very big in this industry, and you’re not going to, in the course of any reasonable timeframe, be able to get out of this dependence or co-dependence.”

Kildee cautioned that any concerns of increased prices should not overtake the moral need to address forced labor.

“First of all, prices are going to be a function of a lot of different variables. One, scale and volume, and the other is certainty,” he said. “But third, and probably most importantly, the lowest price coming from slave labor is not justifiable.”