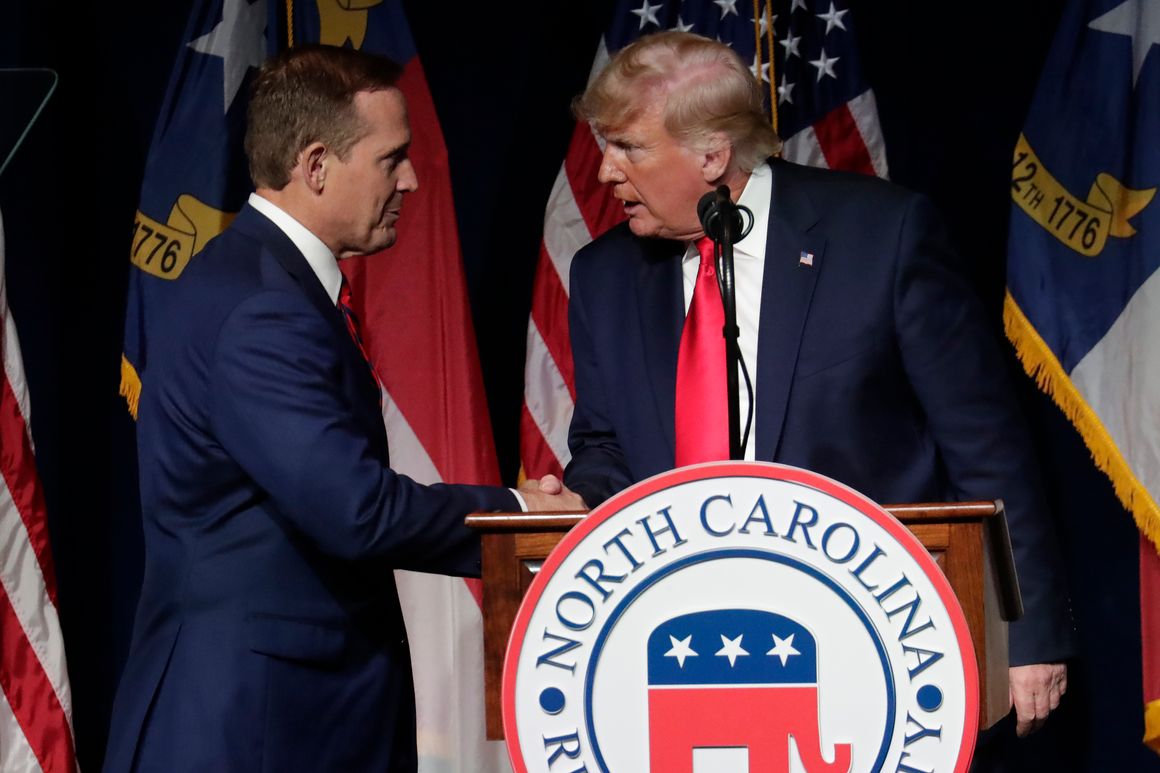 Sen. Richard Burr praised North Carolina’s former GOP governor, Pat McCrory, as “the only one in the race that can win the general election” for the seat Burr is vacating. “Pat McCrory has a commanding advantage,” Burr added.

Behind the scenes, Burr is even less subtle about next year’s Senate battle. One Republican senator said Burr is “telling everyone that McCrory is the only one that has a chance to win.” And the laid-back incumbent, who voted to convict Trump of inciting an insurrection in February, also appeared puzzled by the former president’s decision-making in North Carolina.

“I can’t tell you what motivates him,” Burr said of Trump. “I’ve never seen individuals endorse a candidate a year before the primary. That’s unusual.”

As Democratic Washington becomes consumed with the challenges of enacting President Joe Biden’s agenda, Republican politics still revolve around Trump. But the open question is how long Trump’s dominance will last: Budd’s internal poll released after the former president’s endorsement showed him lagging badly behind McCrory. Trump has lost his Twitter megaphone and the round-the-clock news coverage he had as president, potentially hamstringing the effectiveness of his seal of approval.

Trump’s nod will “be helpful. But I don’t know if it will be outcome-determinative” for Budd, said Sen. Lindsey Graham (R-S.C.), who speaks to Trump frequently and is staying neutral in the Tar Heel State. “You’ve got a well-known candidate in McCrory, and he’s not giving up.” 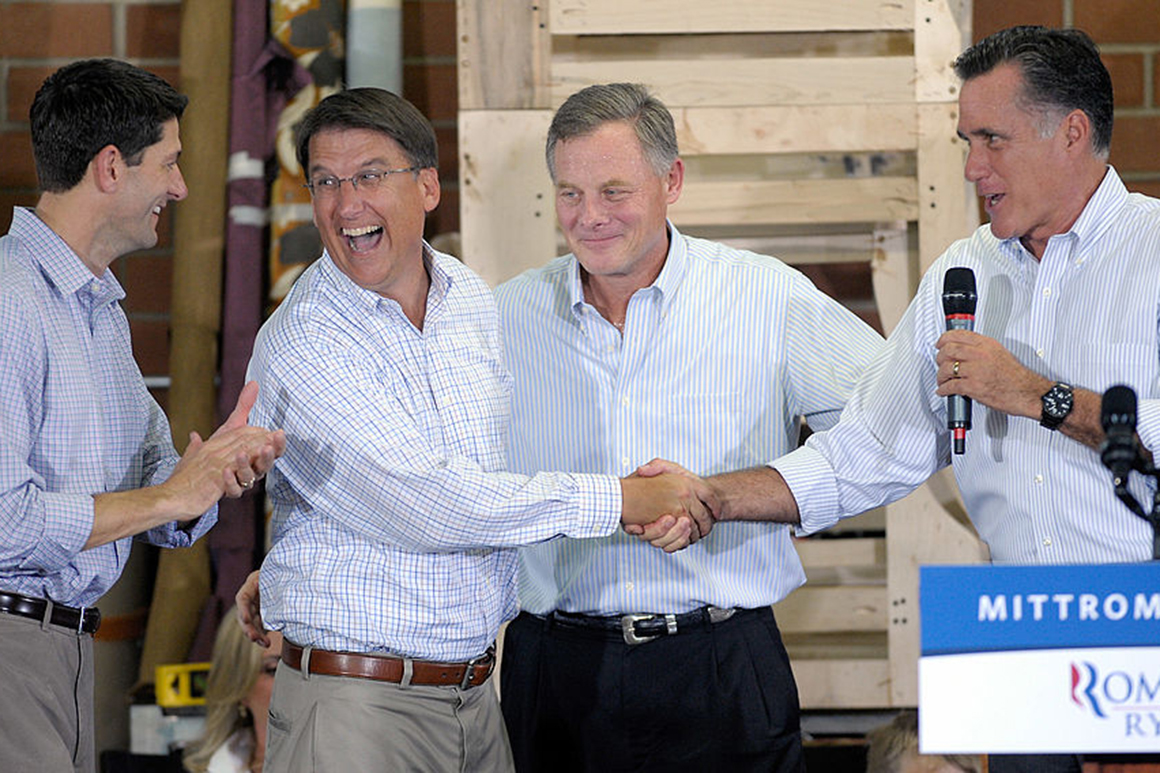 McCrory has been meeting privately with Republican senators to make his case that, as a former governor, he has a far better path than Budd or another GOP primary hopeful, former Rep. Mark Walker (R-N.C.), according to people familiar with the situation. The stakes of the race to replace Burr are high: North Carolina is one of Democrats’ best chances to pick up a seat next year and Republicans are just one seat away from taking back the majority.

The North Carolina primary is early and expected in March — though that date could slip given uncertainty about House redistricting. The intra-GOP contest will offer an early clue into Trump’s influence on next year’s midterms, as Republicans seek to hold seats in Pennsylvania, Missouri, Wisconsin, Ohio, Alabama and North Carolina and try to topple Democratic senators in New Hampshire, Arizona, Georgia and Nevada.

If Republicans nominate a weaker general election candidate in a single state like North Carolina, they could end up blowing their shot at taking back the Senate. Walker compared the situation to Republicans’ debacle in the 2017 Alabama Senate race, where Democrat Doug Jones prevailed over the beleaguered and Trump-backed Republican nominee: “This, to me, is kind of a Roy Moore situation if you’re not careful.”

“I don’t see how [Budd] can win a general election,” Walker said in an interview. He had only slightly kinder words for McCrory, who lost his reelection race for governor in 2016 to Democrat Roy Cooper. Walker appears to be in third place at the moment in the Senate primary, with McCrory seeking establishment support and Budd winning Trump’s favor. Walker, however, touts a straw poll win among North Carolina Republicans.

Senate Minority Leader Mitch McConnell has not indicated whether he will pick a favorite in the race. The Kentucky Republican has made clear that he’s willing to intervene in primaries if he feels it’s necessary to ensure the GOP wins control of the Senate in 2022. But in the case of North Carolina, that could also put McConnell on a path to war with Trump — a course he seems eager to avoid, at least for now.

“I just want to win in November. And I don’t have any view of the primary in that regard,” McConnell said when asked about Trump’s endorsement.

Budd, a former businessman, came to Congress in 2017 as Trump took office and quickly earned a reputation as a conservative hard-liner. The Club for Growth is also backing his bid for the Senate.

Though Trump’s endorsement could certainly boost Budd in the primary, it’s unclear whether the former president can propel him across the finish line. With Trump’s online presence pared down, Budd may have to spend big to make voters aware of the endorsement.

Many Republicans believe McCrory’s experience running statewide — which has brought him high name ID and a broad fundraising base — makes him the most well-positioned candidate to take on the Democratic candidate next fall. But he also lost in 2016 — a good year for Republicans, when Burr won his third term after running a characteristically low-key race.

“Right now, I still think Pat is the favorite due to running so many times statewide. However, I believe President Trump will unload on McCrory, which is going to damage him in a Republican primary when you have more people paying attention,” Walker said.

Trump’s surprise intervention has been the foremost drama so far, creating sore feelings among his party’s candidates and causing dissension among North Carolina Republicans.

Walker blames Trump’s former chief of staff Mark Meadows for orchestrating the endorsement, which was rolled out at the state’s party convention while the other candidates were present — catching them off-guard. The former GOP lawmaker also accused Meadows of pushing Trump to make a bad choice in another North Carolina primary: In 2020, Trump backed Meadows’ family friend Lynda Bennett over now-Rep. Madison Cawthorn.

Walker did earn support from Trump chief of staff Mick Mulvaney, but that endorsement is secondary to Trump’s. Walker said Meadows gave Trump “bad counsel” on the Budd endorsement.

Walker, the former head of the conservative Republican Study Committee, and Meadows, who once chaired the hard-line House Freedom Caucus, often bumped heads during their time in Congress together. Almost from the start, there seemed to be a competition between the “two Marks,” who were both ambitious and looking to rise in the House — a relationship that quickly evolved into a tense political rivalry.

And incumbent Sen. Thom Tillis (R-N.C.), whom Walker threatened to run against in 2020, is making sure to needle Walker every chance he gets. Surmising the field, Tillis sees a two-man race: “If I were Mark Walker, I would not have run for the Senate because I could not see a path for myself.”

McCrory has expressed frustration with Trump’s endorsement in the race, asserting that Trump “got bad advice in picking a Washington D.C. insider.” Budd’s internal polling also showed that he gained a significant edge when voters were informed of Trump’s endorsement.

Amid early signs that the race could get nasty, there are fears the eventual GOP nominee could emerge damaged from the primary battle. Walker is the underdog, but his stinging attacks could provoke a reaction from his rivals that creates an even greater spectacle.

But McCrory and Budd are acting like he barely exists. In a statement, Budd said he’d prove Burr “wrong” by winning a general election. His adviser, Jonathan Felts, said that McCrory’s 2012 gubernatorial win was “served up on a country club silver platter and handed to him.”

“If Republicans want a majority in the U.S. Senate, they will nominate Pat McCrory,” Shaw said. “Otherwise, Democrats are going to take this seat and keep the majority.”