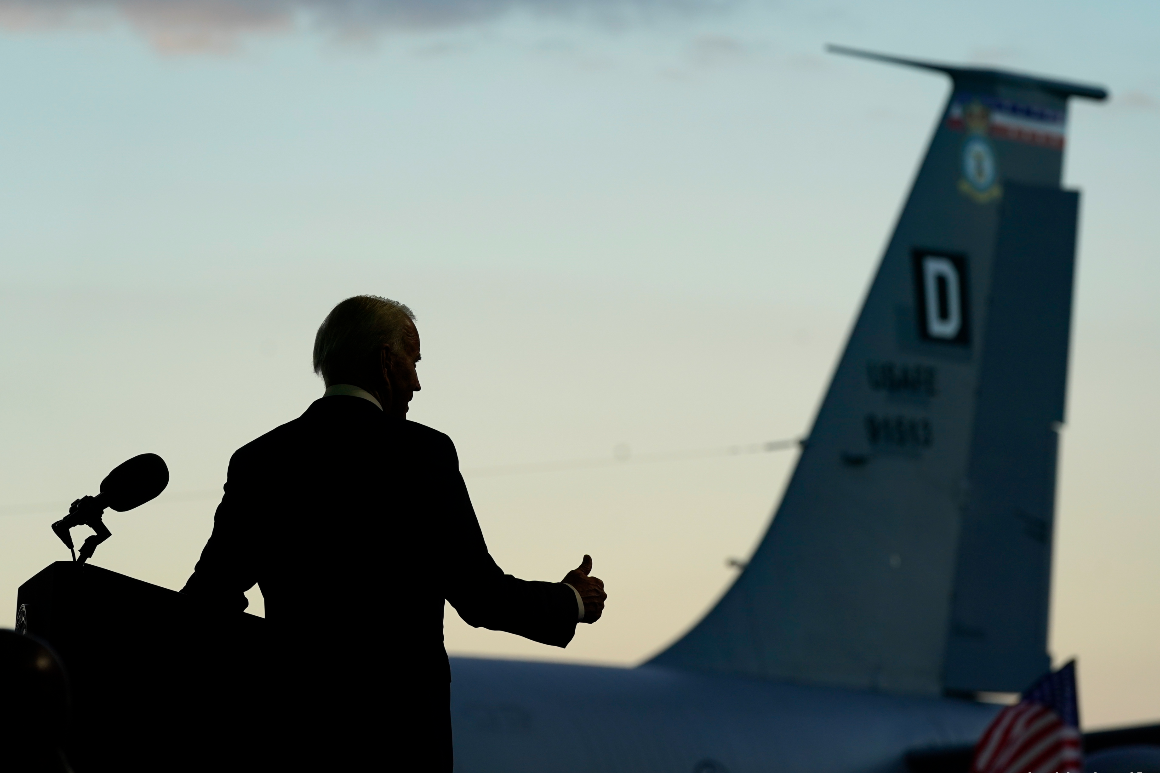 BRUSSELS — Joe Biden arrived in Europe this week with a very different image than that of his preening predecessor, Donald Trump, but there’s one big issue on which — rhetoric aside — the two men are aligned: the China challenge.

Over the coming week of summits, however, Biden will have a tough sell to get Europe on board with a united front against China, as leading European countries remain skeptical of siding with America to confront Beijing.

In particular, Biden will have to find the right balance with French President Emmanuel Macron, whose main diplomatic guiding principle is for Europe to craft its own China policy in the spirit of “strategic autonomy” instead of following the U.S. lead.

That’s on top of Germany, whose outgoing Chancellor Angela Merkel is less interested in calling out Beijing’s human rights violations than ramping up car sales in the country Washington sees as its biggest geopolitical rival.

“The EU agrees with the U.S. on certain concerns arising from China’s rise to be a global power,” a senior European Union diplomat said. “But China is more of a concern for Washington than for Berlin or Paris. After all, it’s the American economy that will be overtaken by the Chinese one.”

The diplomat added: “Biden is going to get a lot of smiles in Europe because it’s no longer the Trump era where if we don’t listen, we’re an enemy. The signs, so far, have been largely positive.”

The EU’s executive branch, the European Commission, proposed a transatlantic agenda as soon as Biden’s win was declared. While China is a main issue in the agenda, the EU isn’t shy about the differences it has with the U.S. on how to tackle the challenge. “As open democratic societies and market economies, the EU and the US agree on the strategic challenge presented by China’s growing international assertiveness,” it says, before adding: “even if we do not always agree on the best way to address this.”

“We’re at the beginning of an effort to forge a common approach to dealing with the rise of China, and I think that many of America’s democratic allies are not spoiling for a fight,” said Charles Kupchan, who served as senior director for European affairs on the National Security Council staff during the Obama administration. “At the end of the day, China will be uncomfortable, and that’s because the Chinese don’t like any criticism whatsoever or any sense that the world’s democracies are ganging up against it.”

Beijing might be sensing that the collective action Biden is pushing for seems to be working: in a highly unusual speech earlier this month, President Xi Jinping called for China to be more “lovable” and “expand the circle of friends.”

The question is: just how uncomfortable will the U.S. and Europe agree to make China? Diplomats on both sides of the Atlantic are trying to find — and expand — the common ground.

Amid China’s dominance of 5G technology and the abundance of state-subsidized global business expansion, Biden is expected to unveil a U.S.-EU trade and tech council while in Brussels. According to an EU official, this will be used as an “operational platform” to devise policies on semiconductors, 5G technology and artificial intelligence in order to weaken Beijing’s ambition in global leadership.

Another fear stems from Beijing’s largesse in acquiring critical infrastructure all over the world through the Belt and Road initiative. Over the G7 summit in the U.K., Biden, Macron, Merkel and the other world leaders are expected to announce what Biden has called a “high-quality” alternative to China’s Belt and Road initiative, a multibillion-dollar scheme to build infrastructure in the developing world.

Spokespersons for the White House and the State Department did not immediately offer comment.

But Biden forecast some of his plans in a weekend column in The Washington Post, in which he described the overall purpose of his trip as “being about realizing America’s renewed commitment to our allies and partners, and demonstrating the capacity of democracies to both meet the challenges and deter the threats of this new age.”

That goal requires investing in infrastructure, the president wrote.

“The world’s major democracies will be offering a high-standard alternative to China for upgrading physical, digital and health infrastructure that is more resilient and supports global development,” he wrote.

Listen, and make them happy

After four years of an anti-EU White House, the Biden administration has been actively pursuing closer alignment with Europe in order to confront China, while officials have been at pains to calm European countries worried about having to pick sides between Washington and Beijing.

“The United States won’t force our allies into an ‘us-or-them’ choice with China,” Secretary of State Antony Blinken said on a trip to Brussels in March.

Blinken’s deputy, Wendy Sherman, held the first U.S.-EU dialogue on China with her counterpart in Brussels last month. “Our interests will not always align perfectly, but we have so much more in common with each other than we have with some of the challenges and challenging parties, people and countries outside,” Sherman said.

EU officials are particularly pleased with the fact that the Biden administration shifted from Trump’s all-out confrontation with Beijing to a multi-pronged approach that encompasses competition and cooperation, citing U.S. climate czar John Kerry’s visit to China as a positive gesture.

“So far, the signs from the U.S. are in the right direction,” an EU official said. “Biden’s visit will be a chance for us to see if the Americans are walking the talk, to consult with us on how to move forward on China, not just asking us to go their way.”

Making Biden’s mission easier, China has rocked the boat of what was once a positive vibe with Europe. The European Parliament has decided to freeze the ratification process of a massive investment deal with China, as Beijing has refused to withdraw sanctions on EU parliamentarians and diplomats.

Still, Beijing is keen to reach out to Europe as it foresees a long-term competition from the U.S. Just last week, China hosted the visits of three EU foreign ministers — from Ireland, Hungary and Poland — while Xi and Premier Li Keqiang held a series of talks with Merkel and Macron. Indeed, France and Germany reached out to China for a trilateral session on climate change just a few days before the White House hosted a world leaders’ summit on the same subject.

In the context of the 27-nation EU, foreign policy is firmly in the hands of the member states, making Germany and France the most influential players in driving EU-China relations.

“Biden needs Europe on board for his economic agenda vis-a-vis China to work, but it really is on Berlin and Paris to understand that this is about much more than just the future of the transatlantic relationship, but about the future of Europe’s own security and prosperity when it comes to address the challenges posed by China,” said Janka Oertel, director of the Asia program at the European Council on Foreign Relations.

While that may be the case, Europe will continue to debate whether the best way forward is to put up a united front with America, with France at the forefront of such hesitation.

As Germans prepare to go to the polls this September after 16 years of Merkel, Oertel said Berlin could be ready for a tougher stance on China — after the summer.

“Merkel’s position on China will not change in the remaining months of her time as chancellor, so it will be important for the Biden administration to think beyond the current set-up and have some strategic patience,” she said. “It is important not to create conditions now that will make it harder to cooperate in a few months’ time.”

“I think there’s good momentum to build U.S.-EU convergence on China. The European Parliament’s rejection of [the China investment agreement] shows how quickly the mood is shifting in Europe,” Haddad said. “Even if you can still find transatlantic differences on the broader assessment of the challenge represented by China, there’s increasing convergence on a lot of sectoral issues and this is where the Biden administration can work with Europeans.

“It’s also urgent to work on sending vaccines to the rest of the world to push back against Chinese efforts in this area,” he added.

There’s no question forging actual, lasting agreements — even among allies — will take longer than the next few days. But at this stage in Biden’s presidency, even symbolic moves can resonate, and that includes making Europe the destination of his first foreign trip.

“Will the democratic alliances and institutions that shaped so much of the last century prove their capacity against modern-day threats and adversaries?” he wrote in The Washington Post. “I believe the answer is yes. And this week in Europe, we have the chance to prove it.”