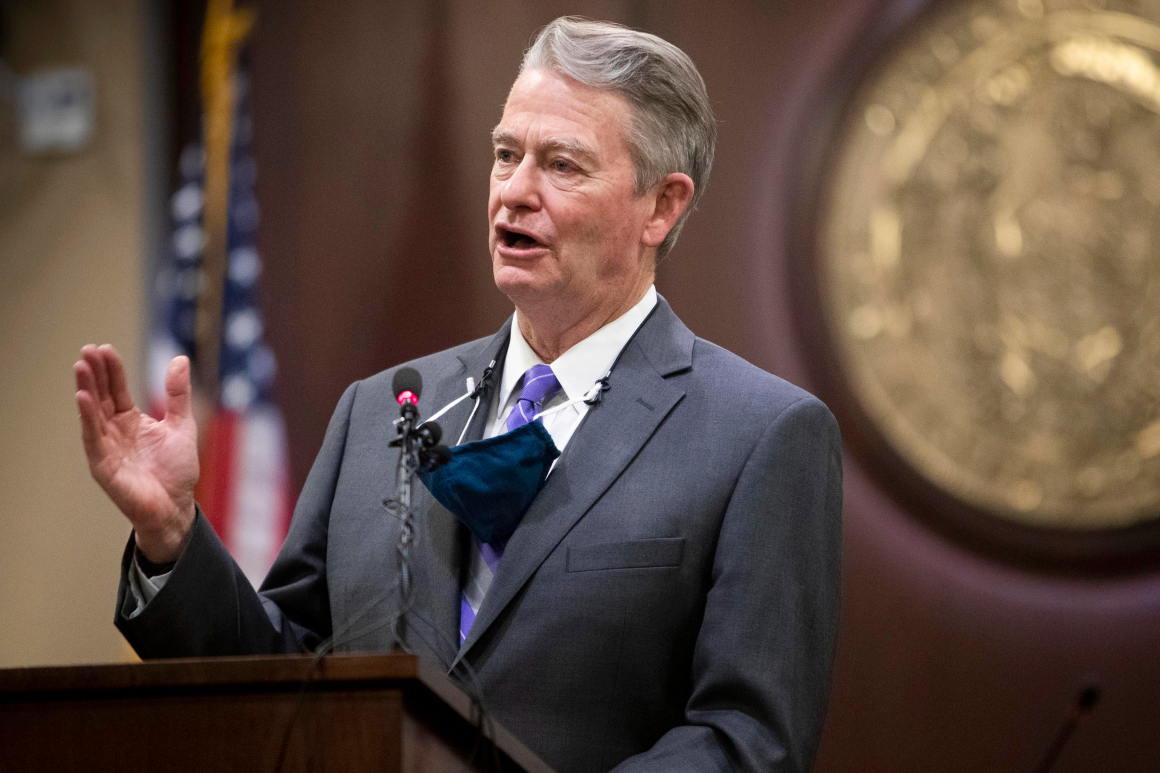 BOISE, Idaho — Gov. Brad Little had only briefly traveled out of state to attend a Republican governors’ conference when his own lieutenant governor made him regret it.

Little rescinded it the next day upon his return, swiping at McGeachin for her “irresponsible, self-serving political stunt.” But the lieutenant governor had already made her point: she would go to almost any length to defy the governor, when it comes to pandemic restrictions.

It’s another messy chapter in Idaho’s 2022 Republican gubernatorial primary, the only one in the nation in which a sitting governor is being challenged by a lieutenant governor of his own party.

What’s happening here isn’t simply about an overly ambitious second-in-command. In a deeply conservative state that’s a proving ground for feuding factions in former President Donald Trump’s GOP, the primary revolves around a derivative of Trumpism — resistance to coronavirus-related mandates and restrictions.

“Our party is struggling with its identity. It’s going to come to an ugly head,” said Kay Lynn Smith, the GOP chair in rural Butte County.

“We are so bipolar right now. We are one of the big strongholds for the ultra-conservatives and they’re looking to make this their kingdom,” she said. “Moderates and a lot of the people who had the money and the power are aging out and losing interest. They’re not interested in supporting a party with radicals.”

In Idaho, as in a handful of other states, the governor and lieutenant governor don’t run on the same ticket — they are separately elected. Little hails from an older establishment line of Idaho Republicans. McGeachin, by contrast, flourished as a new tea party conservative and gained more influence with the rise of Trump-era conservative populism, which went into overdrive during the pandemic.

By at least two key metrics, Idaho was a pandemic success story under Little: It has the sixth-lowest unemployment rate in the nation and ranks 41st in Covid death rate. With the good economy and Republicans largely in lockstep about low taxes, gun rights and fewer regulations, McGeachin’s campaign has instead centered around mask mandates, appeals to personal freedom and bashing the federal government — even when she benefited from coronavirus relief money.

Early on in the pandemic, McGeachin spoke at rallies protesting the governor’s brief stay-at-home order issued in the spring of 2020.

China Gum, who advised former GOP Rep. Raul Labrador’s 2018 gubernatorial campaign against Little, said the governor opened himself to a primary challenge because of what many conservatives saw as a heavy-handed approach to the pandemic. McGeachin, she said, is more of an heir to the brand of conservative politics practiced by the tea party, Trump and Florida Gov. Ron DeSantis, whose laissez-faire approach toward keeping Florida open contrasted with Little’s policies in Idaho.

“A lot of people were saying he’s not DeSantis enough … DeSantis is a lot more symbolic of what Idaho Republicans want,” Gum said. “I don’t understand why Brad Little has been more California in his approach, more shut-down on this issue.”

DeSantis was the first governor in the nation to essentially ban local governments from implementing mask mandates, which McGeachin highlighted when she issued her short-lived mandate once Little stepped out of state. Local conservatives loved it. 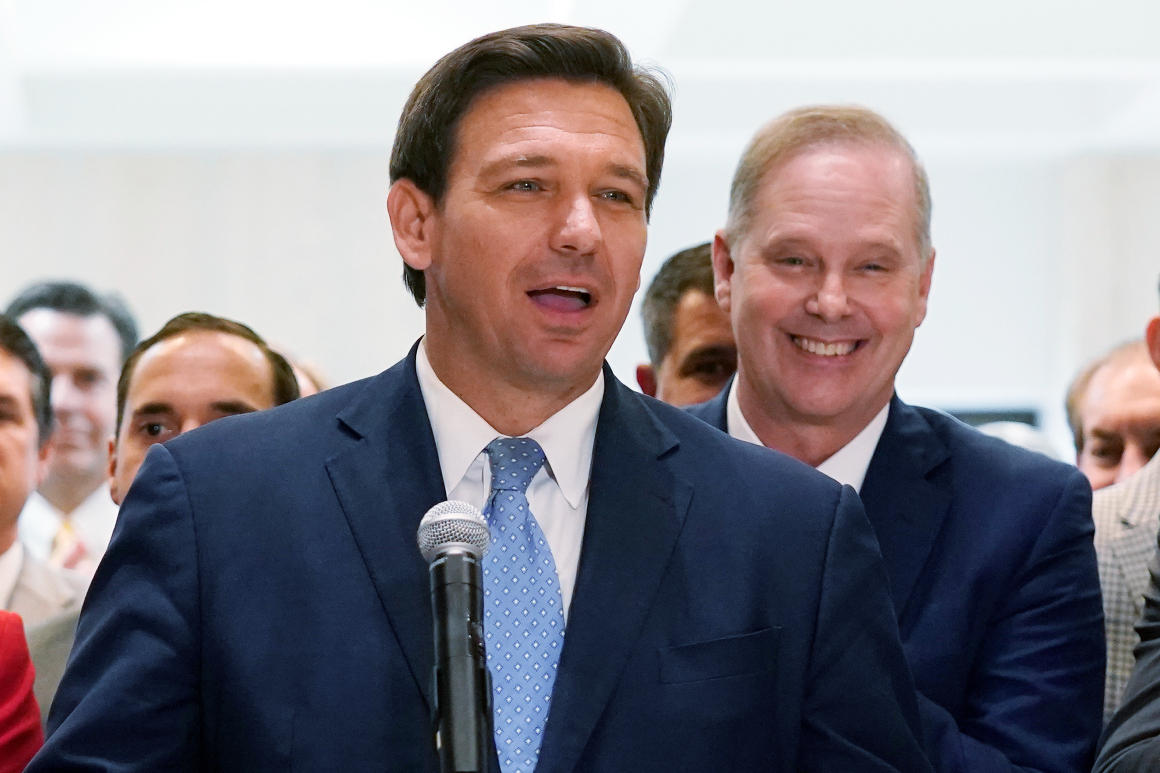 “Half the party or more is on the DeSantis train. We would like a DeSantis,” said Boise County GOP Chair Eric McGilp.

Rebecca Crea, the GOP chair in Lewis County, said there’s a feeling among many in the party that Little was too strict with pandemic restrictions. She said Little was a RINO (Republican in Name Only) who won his office in 2018 thanks to slick ads and a crowded GOP primary that siphoned votes from the more conservative candidate, Labrador. Little beat Labrador in the primary by 37-33 percent.

“People are paying attention now,” she said. “You had people not paying attention [in 2018] and they vote for people simply because they have a cowboy hat, and Little is a rancher … We want him to be more of a governor than he is. Janice has been for the people all the time. She’s on the ground. She knows the people. And everyone loves her.”

An adviser to Little, who did not want to publicly weigh in on the divisive primary, said the governor’s team believes he’ll win because McGeachin represents a vocal minority. But the primary revealed how politics are changing in the state.

“Everybody says, ‘oh, it’s about the economy, about the economy, about the economy.’ Sure. But it looks as if the Republican Party is moving away from economic issues, because in a place like Idaho, it’s already so strong,” the adviser said. “So where do you go next? I mean, there’s been critical race theory discussions here in Idaho, discussions about diversity programs in Idaho. The conversations are starting to change in this Republican primary. The litmus test is no longer, ‘did you vote for a tax increase? Are you Pro Life? Are you Pro Gun?’”

McGeachin isn’t Little’s only challenger on the right — her message is amplified by anti-government activist Ammon Bundy, a vigorous opponent of Little’s stay-at-home order and other Covid-related legislation.

Bundy gained a following after a 2016 standoff with federal agents at Malheur National Wildlife Refuge and last year zip-tied himself to an office chair during a protest of coronavirus restrictions at the Idaho state Capitol. Police promptly wheeled him out; he has been banned him from the building for a year.

The state Republican Party has disavowed Bundy as too extreme, saying in a statement “we do not support his antics or his chaotic political theater.”

In a state with a robust militia movement, McGeachin has her own ties to radicals — and, indirectly, Bundy. In February 2019, she signaled support for a state Capitol rally organized by the Real III Percent of Idaho militia group protesting the conviction of a Bundy associate.

McGeachin was photographed making a heart symbol with her hands as she was flanked by two militia members flashing an “OK” hand symbol that some associate with code for “white power.” She posted the photo on her Facebook page but then took it down and issued a statement disavowing racism.

More than a month later at another militia rally, McGeachin administered an impromptu oath of office to members of the Real lll Percent of Idaho Militia that’s usually used to swear in a member of the state’s National Guard. At the time, Gov. Little was traveling out of state, leaving her in charge. McGeachin again took advantage of Little’s absence to issue the mask rule when he traveled to a Republican Governors Association meeting in Tennessee.

“The tension between some legislators and the governor has been there for a while,” said state Sen. Mark Harris, the Republican caucus chair, who worries about further division in the party as the primary races continue.

Dan Cravens, GOP chair in Eastern Idaho’s Bingham County, pointed out that Idaho has had a recent history of far-right candidates, notably Rex Rammell, who won about one-quarter of the GOP gubernatorial primary vote in 2010 after touring the state with a giant inflatable dinosaur — designed to symbolize his intent to “take a bite out of the federal government.” He became politically active following a confrontation with state officials.

“There’s a greater populism and a greater activism in the party than in the last few years,” Craven said. “We have a profound split in Idaho. It’s our constant battle within the Republican Party between one faction and another.”