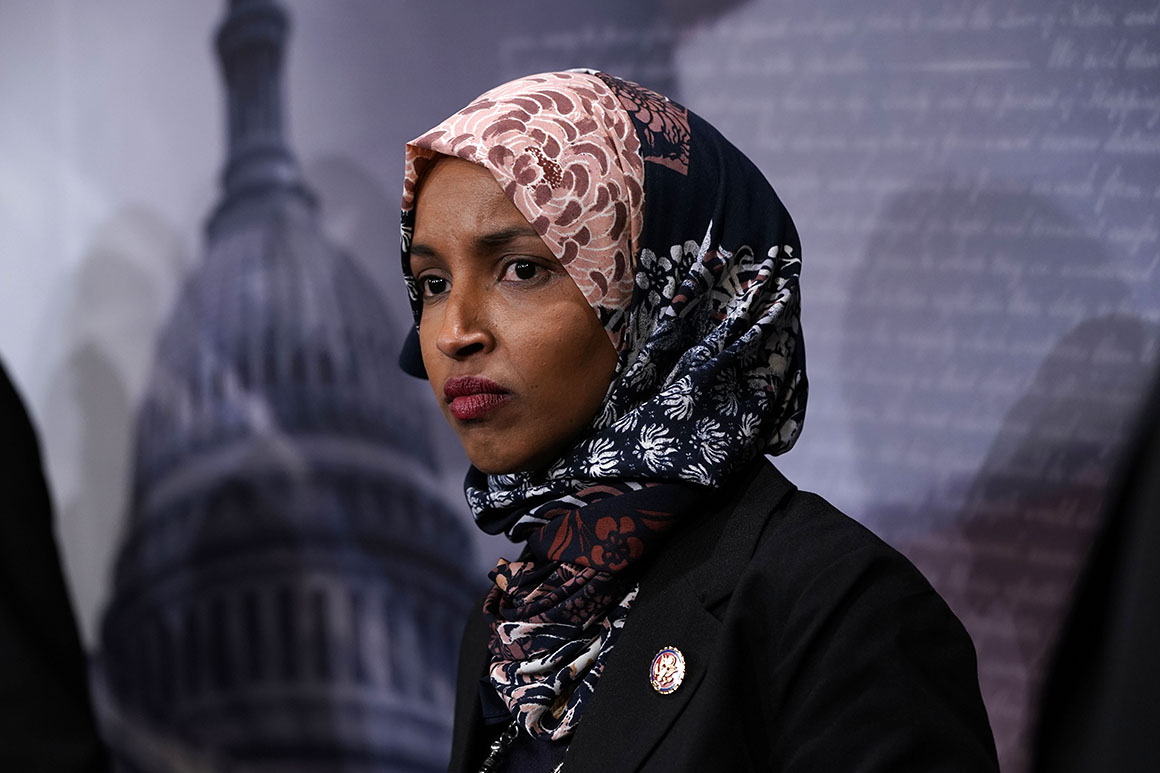 Top Democrats on Thursday attempted to quickly defuse a fraught dispute within their caucus after comments by Rep. Ilhan Omar that compared war crimes committed by the U.S. and Israel to Hamas and the Taliban incensed some Jewish Democrats.

Speaker Nancy Pelosi’s leadership team took the unusual step of issuing a statement that both rebuked Omar for her comments and thanked her for later clarifying her remarks — taking a more nuanced approach than the last major uproar over the Minnesota Democrat’s comments on Israel that escalated into a days-long political crisis for her party.

The rare unified statement from the top six Democratic leaders came less than 24 hours after a dozen of Omar’s Democratic colleagues issued a late-night statement criticizing her. While Democratic leaders did not follow House GOP counterparts in accusing Omar of antisemitism, the Pelosi-led statement warned that “drawing false equivalencies” such as Omar’s “foments prejudice and undermines progress toward a future of peace and security for all.”

The leadership response came after Omar issued a mid-day clarification of her comments following a House Foreign Affairs Committee hearing with Secretary of State Antony Blinken, which she summed up in a tweet citing “unthinkable atrocities committed by the U.S., Hamas, Israel, Afghanistan, and the Taliban.”

After the dozen Democrats spoke out against her comments, Omar quickly denounced the “harassment & silencing” from her own colleagues.

By Thursday afternoon, the tensions within the caucus — which had been threatening to spill over hours earlier, with more of Omar’s progressive allies coming to her defense — reached something of a detente. But some of Omar’s allies in the progressive alliance known as “the Squad” remained unsettled by their leadership’s handling of the matter.

Omar’s clarification stated that her conversation with Blinken was about “accountability for specific incidents” under investigation by the International Criminal Court: “I was in no way equating terrorist organizations with democratic countries with well-established judicial systems.”

One person close to Omar said she — one of the first two Muslim women elected to Congress — had tried to contact some of the Democrats involved in drafting the statement before its release but was unable to reach them. By Thursday afternoon, Omar and some of these Democrats had spoken by phone to discuss the matter.

Notably, that group of Jewish Democrats speaking out against Omar’s comments are not specifically calling for a floor vote on the matter, as a bigger cross-section of the caucus did in 2019, according to several sources familiar with the conversations.

Rep. Brad Schneider (D-Ill.), one of the Democrats who had reprimanded Omar in Wednesday’s statement, said Thursday he was “pleased” that Omar heard their concerns about her tweet and issued the clarification and said he hoped that “all can avoid such offhanded statements in the future.”

The internal dispute over Omar’s comments on U.S. foreign policy comes more than two years after she faced public pushback from both parties over comments seen as antisemitic. The House GOP raced Thursday to turn the dozen Democrats’ statement into a political weapon against Omar, with leaders likely to plot floor action on the chamber floor next week.

House Republicans will hold their weekly conference call with their members on Friday, where the issue is expected to come up.

In another key difference from 2019, Omar’s latest remarks have drawn no specific complaints of antisemitism from fellow Democrats.

Rather, her Democratic colleagues took issue with her “false equivalencies” between the U.S. and Israel on one hand, and Hamas and the Taliban on the other. The critical statement from 12 Democrats, led by Schneider, rebuked Omar’s comments during a House Foreign Affairs Committee hearing on Monday, when she asked Secretary of State Antony Blinken about a International Criminal Court probe of allegations against both the Taliban and the U.S. in Afghanistan and by Hamas and Israel in their own recent Middle East conflict.

The comments spurred a fierce debate among many Jewish Democrats, several of whom have previously taken issue with Omar’s remarks that they described as anti-Semitic. Out of several dozen Democrats who took part in discussions this week, 12 lawmakers signed the statement. Those discussions were first reported by the Jewish Telegraphic Agency.

“Equating the United States and Israel to Hamas and the Taliban is as offensive as it is misguided,” the 12 Democrats wrote in the statement, adding that “false equivalencies give cover to terrorist groups.”

A spokesperson for Schneider said Omar did not attempt to call him, but did not know about attempts to reach other members. The spokesperson also confirmed that Democrats signing the statement do not call her actions antisemitic.

Several House Republicans publicly condemned Omar’s comments earlier this week, with many in the party eager to tear open the growing Democratic schism over her views on foreign policy. GOP leaders could pursue as a resolution to censure her or remove her from committees when lawmakers return to Washington next week.

“Speaker Pelosi’s continued failure to address the issues in her caucus sends a message to the world that Democrats are tolerant of antisemitism and sympathizing with terrorists,” tweeted House Minority Leader Kevin McCarthy.

The GOP’s campaign arm also said in a statement Thursday that Democrats should strip Omar of her committees — as Democrats did this year to Rep. Marjorie Taylor Greene after a series of incendiary comments and actions by the controversial Georgia Republican, including endorsing the assassination of Speaker Nancy Pelosi.

Many Democrats, however, reject the comparison of Greene to Omar.

Rep. Cori Bush (D-Mo.), another “Squad” member, tweeted earlier Thursday that “I’m not surprised when Republicans attack Black women for standing up for human rights. But when it’s Democrats, it’s especially hurtful. We’re your colleagues. Talk to us directly. Enough with the anti-Blackness and Islamophobia.”

On Wednesday night, Omar shared a sample of what she described as frequent threats she’s received when she speaks on human rights issues, tweeting a recording that included multiple racist and Islamophobic slurs directed at her.

This week is not the first time Democrats have faced a furor within their caucus over Omar’s political speech. Shortly arriving in Congress, some of Omar’s comments sparked complaints of antisemitism and a raging debate over how Democrats should punish her through a resolution the floor.

In one instance in 2019, Omar suggested that pro-Israel advocates had “allegiance” to Israel, which several Democrats said alluded to painful, decades-old discriminatory tropes of Jews who display “dual loyalties.”

Melanie Zanona contributed to this report.