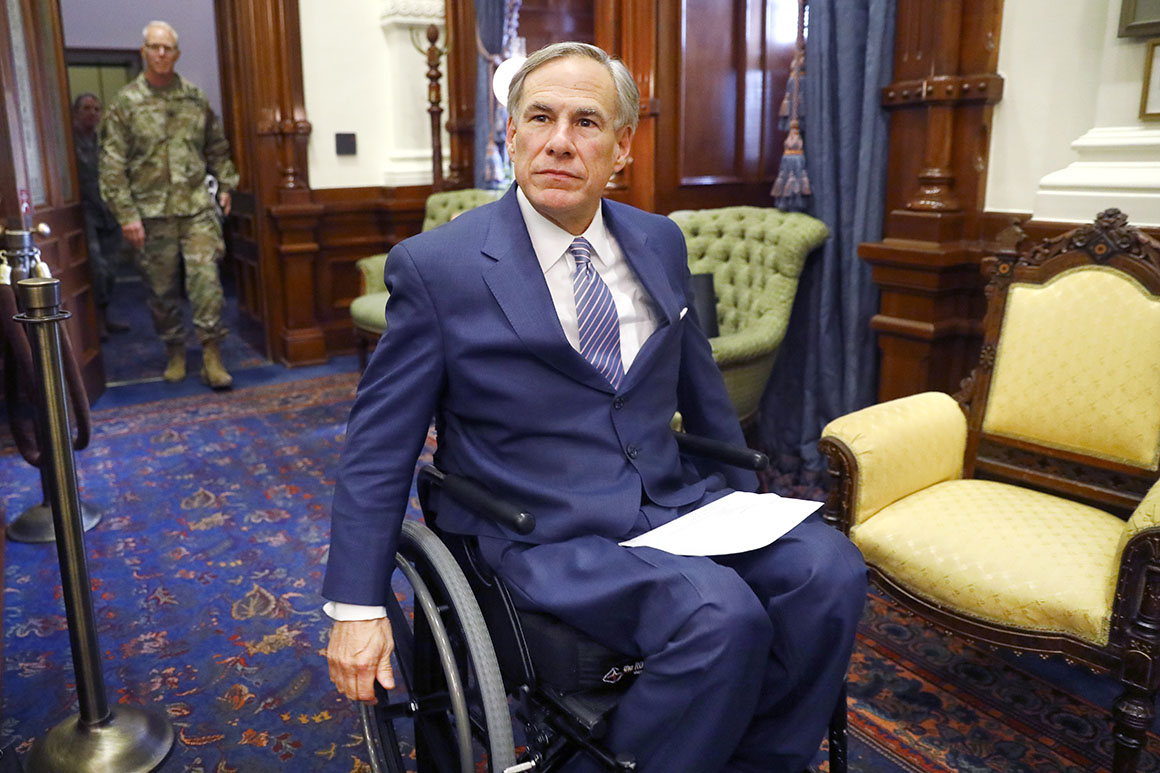 Democrats hoped to spend 2021 aggressively expanding voting access. Instead, they are scrapping to put up a fight due to an enduring problem: their failure to flip any state legislative chambers in the 2020 election.

The party’s struggles to stop Republicans from enacting new limits on voting procedures in state after state are the latest consequence of Democrats’ doomed drive to win more power in state governments last year. Key swing states where Democrats hoped to gain legislative footholds and break up unified GOP control, including Arizona, Florida and Georgia, have instead enacted new laws this year placing limits on mail voting and other election procedures.

Now, Texas — where Democrats targeted nine state House seats Beto O’Rourke carried in his near-miss Senate campaign but flipped none in 2020 — is set to follow suit once Democrats run out of procedural obstacles to throw up against a Republican-backed bill that would restrict voters’ access to the polls there, by further limiting mail voting and targeting new practices in the state’s largest county. The legislation was derailed by a dramatic Democratic walkout this weekend, but Republicans will almost assuredly take another pass at it again during a special session later this year. 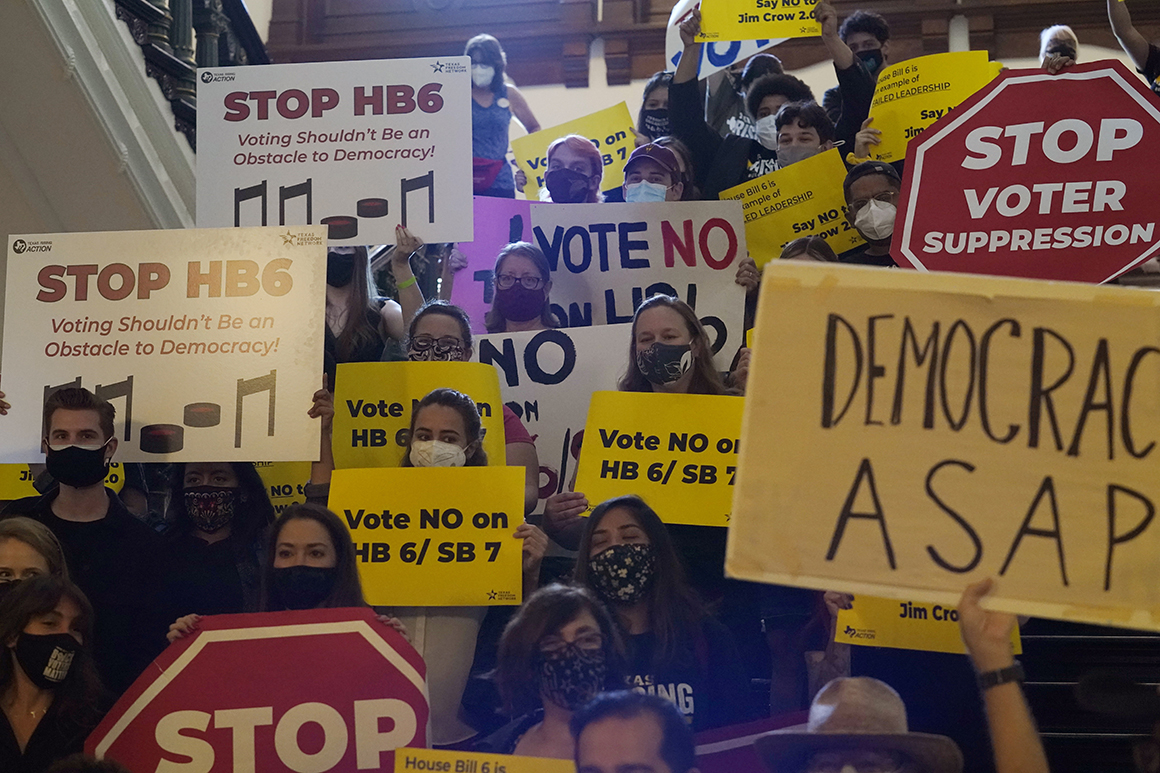 “We’re using the tools we have. But as the minority party, we can only do that so long,” said Texas state Rep. Gina Hinojosa, an Austin-based lawmaker who helped lead the weekend walkout. “We need to ultimately flip this House to be able to stop this right-wing agenda and focus on the needs of Texans.”

“Clearly, leadership was emboldened by the fact that Democrats didn’t flip those seats and find their majority in the House,” added state Sen. Beverly Powell, a Fort Worth-area Democrat.

“These folks at the legislature have demonstrated that they’re willing to do what it takes, but we need backup,” said Lina Hidalgo, the Democratic chief executive of Houston’s Harris County. “For better or worse, that challenge stops at the foot of the U.S. Senate. Really, it’s a plea for help.”

Texas Republicans are expected to take up a version of their bill — which failed to pass Sunday after much of the state House Democratic caucus walked out and broke quorum — in a yet-to-be-called special session. The push to restrict voting rules has become a GOP priority in state governments across the country, as former President Donald Trump continues to lie and spread conspiracy theories about the election results.

“I expect legislators to have worked out their differences prior to arriving back at the Capitol so that they can hit the ground running to pass legislation,” Abbott said in his statement. Abbott also said he would veto the part of the budget that funds the legislative branch as retribution, tweeting that there is “no pay for those who abandon their responsibilities.”

An aide to Abbott said a decision on the timing of the special session was not imminent. Texas and other states are already planning special legislative sessions later this year to address redistricting after the Census Bureau releases local-level population data necessary to draw new political maps.

Republicans’ election bill took aim, in particular, at practices put in place by Harris County, the state’s largest county — and an increasing source of strength for Democrats.

The bill would have banned drive-through and 24-hour voting, which Harris County officials piloted during the 2020 election. The bill also added further restrictions to mail voting in Texas, on top of existing eligibility requirements that mean most Texas voters are not eligible to cast ballots that way. And it would have banned election authorities from allowing in-person early voting before 1 p.m. on Sundays, which was seen as an attempt to limit “Souls to the Polls” events popular among Black churches. (State Rep. Travis Clardy, a Republican involved in final negotiations of the bill, told NPR News on Tuesday the reduction of voting hours on Sunday was a “mistake” and wasn’t intended to be in the final bill.)

The legislation also included a provision allowing a court to “declare [an] election void” if it determined the number of “illegally cast” votes was “equal to or greater than the number of votes necessary to change the outcome of an election, without “attempting to determine how individual voters voted.”

Democratic lawmakers pledged to fight again in the special session over similar proposals. “If people want to be pragmatic and roll up sleeves and come up with a proposal, we know how to do that. If people want to fight, we know how to do that,” said state Rep. Trey Martinez Fischer, who represents a San Antonio-based district. “You tell me what Republicans show up [with] and I’ll tell you what kind of session we’re going to have.”

But Texas Democrats likely won’t be able to run out the clock forever. Instead, some are hoping their extraordinary delay over the weekend will spur Democrats in Washington to make their own voting rights push.

Two pieces of voting legislation are in the works but effectively stalled in the 50-50 Senate right now. One is a sweeping election and campaign finance reform bill, H.R. 1, that would institute federally mandated floors for state election procedures — like requiring no-excuse absentee voting and same-day voter registration. Another bill would require certain states and jurisdictions to have changes to election procedures approved by either the Justice Department or a federal court in Washington, restoring “preclearance” requirements in the 1965 Voting Rights Act that were stripped out by a 2013 Supreme Court decision.

In a statement over the weekend President Joe Biden called the Texas bill “an assault on democracy,” calling for Congress to pass the two proposals. He also tapped Vice President Kamala Harris as his point person on voting rights in a speech in Tulsa, Okla., on Tuesday. 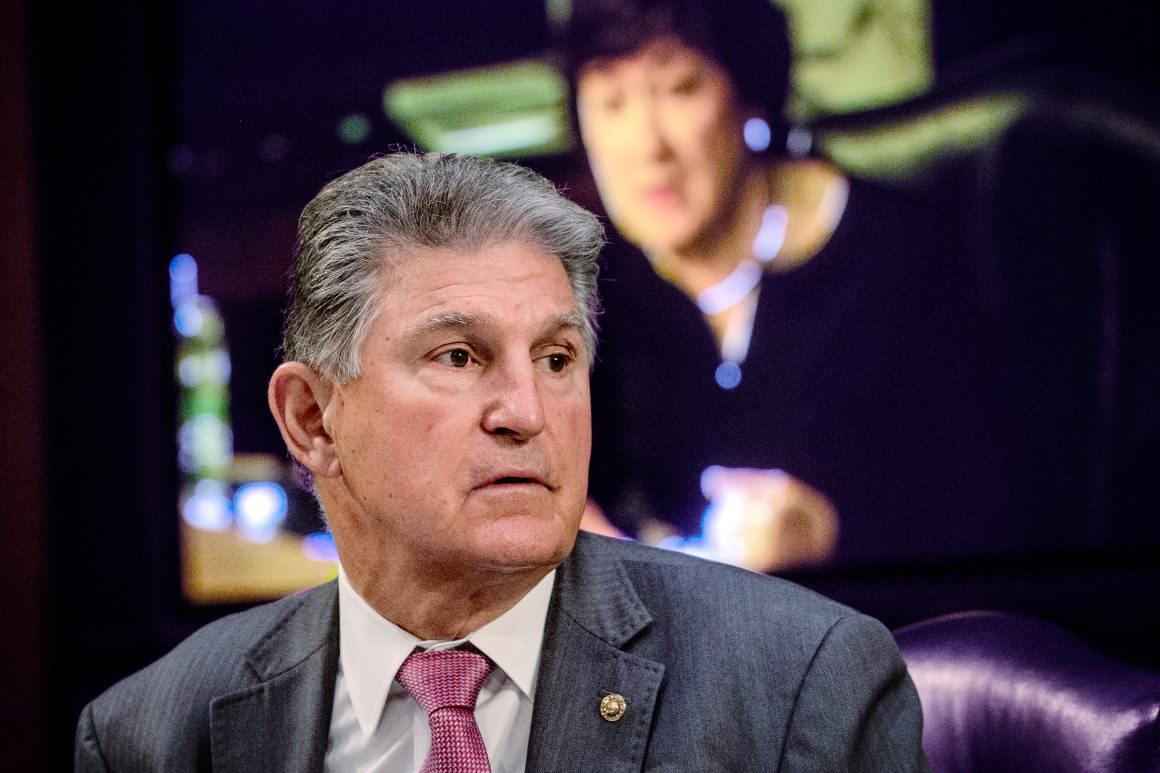 Senate Majority Leader Chuck Schumer has promised a vote on H.R. 1 during the final week of June. But the final fate of the bill remains uncertain. Sen. Joe Manchin (D-W.Va.) remains the only Senate Democrat who hasn’t signed onto the sweeping package. And Manchin and a handful of other Democratic senators have also resisted calls to scrap or modify the filibuster, which effectively requires 60 votes to move most legislation in the chamber.

The update to the Voting Rights Act has yet to be introduced in Congress.

Martinez Fischer, who also helped lead the weekend walkout, said he hoped their protest would “wake the nation up,” and called on the Senate to move on H.R. 1.

“It’s important for Leader Schumer and leaders in the Senate to understand just where we are — at a crossroads in America,” he said. “I recognize that there are certain senators that believe that eliminating the filibuster is tantamount to destroying our country. And my only response to that is that there are people who want to destroy our country state by state, and we have to recognize that and that there is a greater good.”