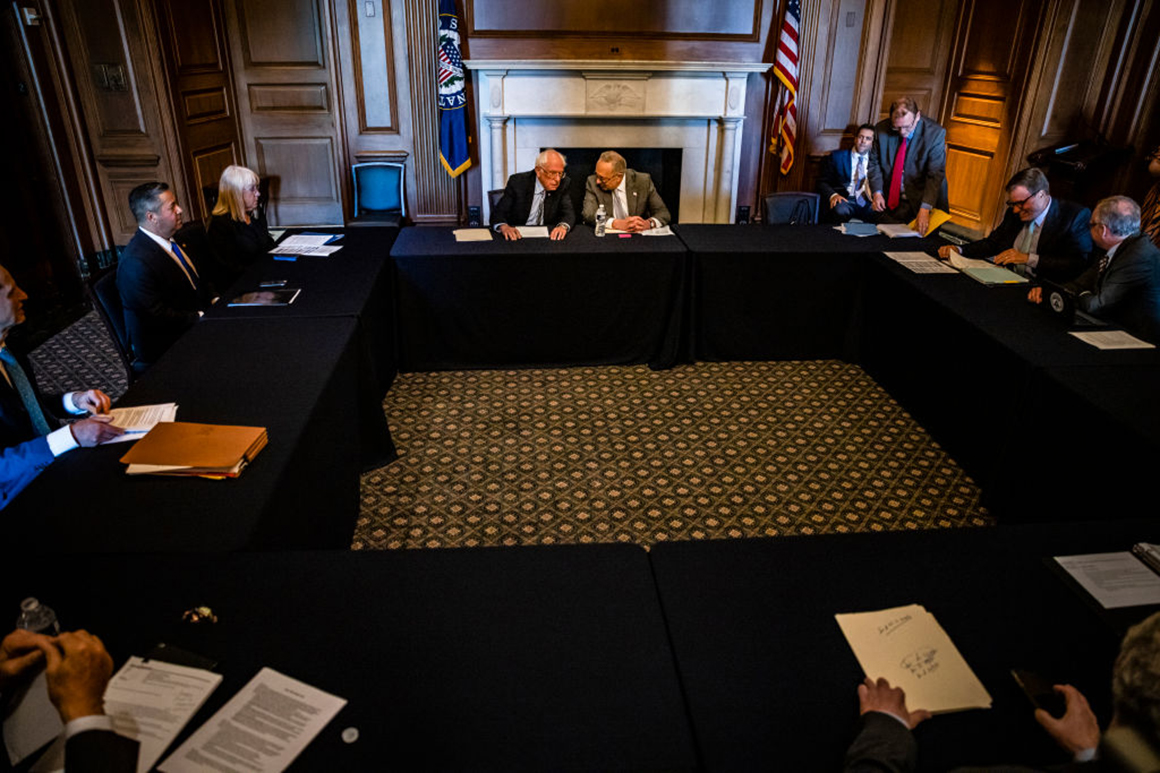 President Joe Biden’s infrastructure negotiations could get more complicated, thanks to the government’s need to keep paying its bills on time.

Democrats are weighing two starkly different options for raising the debt ceiling, with the federal government expected to reach the limits of its borrowing authority within months or even weeks. They could use the filibuster protections of the budget process to raise the debt ceiling and pass some or all of Biden’s infrastructure agenda without GOP support, or they could find 10 Senate Republican votes to suspend the debt limit by reaching a bipartisan deal.

Neither option is especially easy or palatable. The former path requires support from moderate Democrats, who aren’t sold on circumventing the normal legislative path and might face political blowback for voting to hike a national borrowing limit that’s already reached $28 trillion debt. The latter path relies on help from Republicans who are demanding fiscal reform in exchange for their votes, with the stability of the American economy on the line.

“If we’ve got folks on the other side of the aisle or my side of the aisle that don’t want to pay the bills, that’s pretty bad,” said Sen. Jon Tester (D-Mont.), a moderate who joined four others in his caucus to vote against a debt limit suspension in 2019, citing “irresponsible spending.” Sen. Joe Manchin (D-W.Va.), a central figure in the current bipartisan infrastructure talks, also voted against that suspension two years ago.

This time around, Tester said the debt ceiling should be dealt with in a bipartisan manner. That stance puts him at odds with progressives and other Democrats who view it as a bogus fight over an essentially imaginary number that should be raised automatically.

“Raising the debt limit should just happen,” said Sen. Elizabeth Warren (D-Mass.). “This is a fake problem designed to do nothing but slow down the government and add aggravation. The United States government is not going to default on its loan obligations.”

“If we have to raise the debt ceiling, then it will happen,” she said. “But we should spend no time on that.”

The debt ceiling, the limit on the government’s borrowing authority, is suspended through July 31. After that, the Treasury Department can deploy a variety of tactics to avoid missing payments or defaulting on the federal debt. But those measures may run out sooner than expected, setting up a possible collision this summer or fall between a debt fight and Democrats’ hopes to funnel trillions of dollars into strengthening the nation’s infrastructure.

Underscoring those concerns, Treasury Secretary Janet Yellen on Wednesday urged Congress to raise or suspend the debt ceiling within the next month, floating the possibility of a crisis-level situation as early as August — when lawmakers are scheduled to be out of town.

Democratic leaders haven’t said how they plan to deal with the debt ceiling, and sources said the issue hasn’t been discussed much behind closed doors. While a bipartisan group of senators negotiates an infrastructure deal with the White House, Majority Leader Chuck Schumer and Senate Budget Chair Bernie Sanders (D-Vt.) are preparing to launch the filibuster-proof reconciliation process to pass as much as $6 trillion in spending priorities if those talks fall apart. Even if both parties do strike a deal, Democrats can use reconciliation to pass additional measures rejected by the GOP.

Meanwhile, the debt limit didn’t come up during a meeting between Schumer and Senate Budget Democrats last week on a fiscal 2022 budget resolution.

“We’re working on it,” Sanders said this week, when asked if Democrats should use a one-party approach to tackle the debt ceiling. “But we’re obviously more than cognizant of the significance of the issue. It will be dealt with.”

Congress has acted more than two dozen times over the last three decades to avert default on the nation’s financial obligations. Such a scenario would whack the government’s credit rating, increase costs for U.S. borrowers and create stock market chaos — unwelcome turmoil at any time, but especially with an economy inching toward full recovery after the pandemic.

A debt ceiling extension could also get tucked into bipartisan infrastructure legislation or a bill to keep the government funded beyond Sept. 30, but then it would require the support of at least 10 Senate Republicans. Washington Sen. Patty Murray, the No. 3 Democratic leader and a senior member of the Budget Committee, said the party hasn’t decided what to do yet. Schumer’s office didn’t respond to a request for comment.

“It has to be done,” Murray said. “I don’t know the path yet. Everybody is aware that it needs to be done. We have to pay our bills.”

Some Democrats pushed back on the notion that a vote to raise the debt ceiling on party lines is a tough sell for more moderate members. If they go that route, they couldn’t afford to lose a single vote with a 50-member majority in the upper chamber.

“You can’t have it both ways,” said Maine Sen. Angus King, an independent who caucuses with Democrats. “If you vote for spending, you’ve got to vote to raise the debt ceiling.”

Sen. Tim Kaine (D-Va.) noted that a reconciliation package would be paired with measures to raise federal revenue and grow the economy, which should take the sting out of voting for a debt increase.

“For me, it’s not a hard vote to raise the number, which is a meaningless number, if I feel like there’s a debt management strategy that makes sense,” he said.

But raising the debt limit via reconciliation is relatively rare. Congress has used the special budget process just four times to enact an increase since 1986, with the most recent hike happening in 1997, according to the Congressional Research Service.

Suspending the limit to a later date has been a more popular option in recent years, rather than increasing the limit to a higher amount. Reconciliation has never been used to pass a suspension, however. The arcane rules governing the process specifically allow for altering the debt limit “amount,” raising questions about whether a suspension is even allowed to pass under reconciliation.

If Senate Democrats pursue a bipartisan route to suspend the debt ceiling, as they have in recent years, it’s far from clear if enough Republicans will join them. Republican leaders have said they don’t have the votes to pass a clean extension without slashing spending. And the Senate GOP recently endorsed a call to pair spending cuts with debt ceiling hikes.

“We need a fiscal reorientation now more than ever,” said Sen. Pat Toomey (R-Pa.), a conservative fiscal hawk on the Budget Committee. “So, I’d like to see us do that. I’m not optimistic we will, but that’s what we should do.”